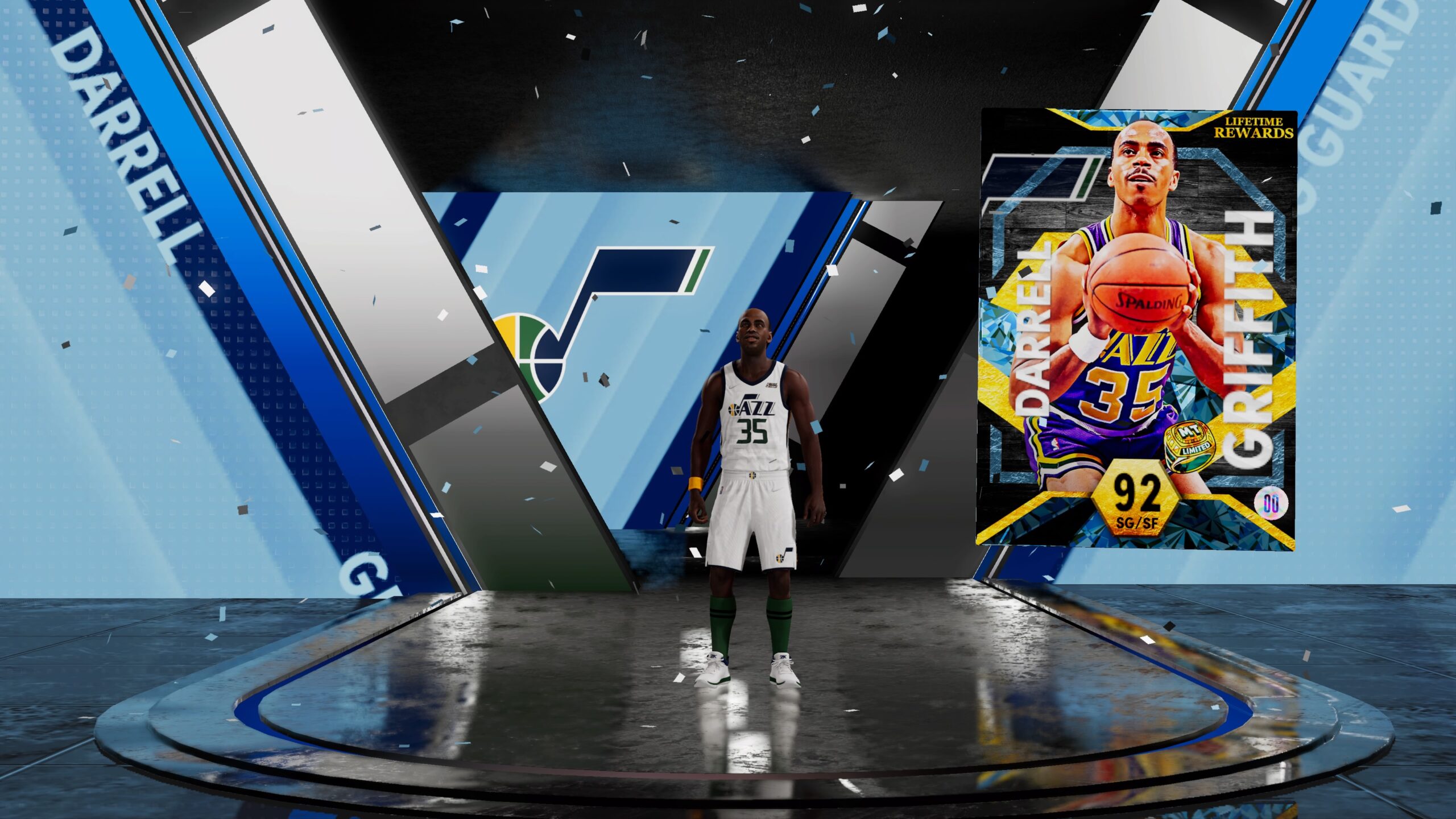 Thanks to Luka Doncic and Darrell Griffith, I’ve spent the last couple of weeks taking a full tour of NBA 2K22 MyTeam. In what I hope will be a very consistent element, the Lifetime Agenda Events to unlock a free diamond Luka-magic and Dr. Dunkenstein required a lot of time and effort, and I’m 100 percent here for that kind of grind. 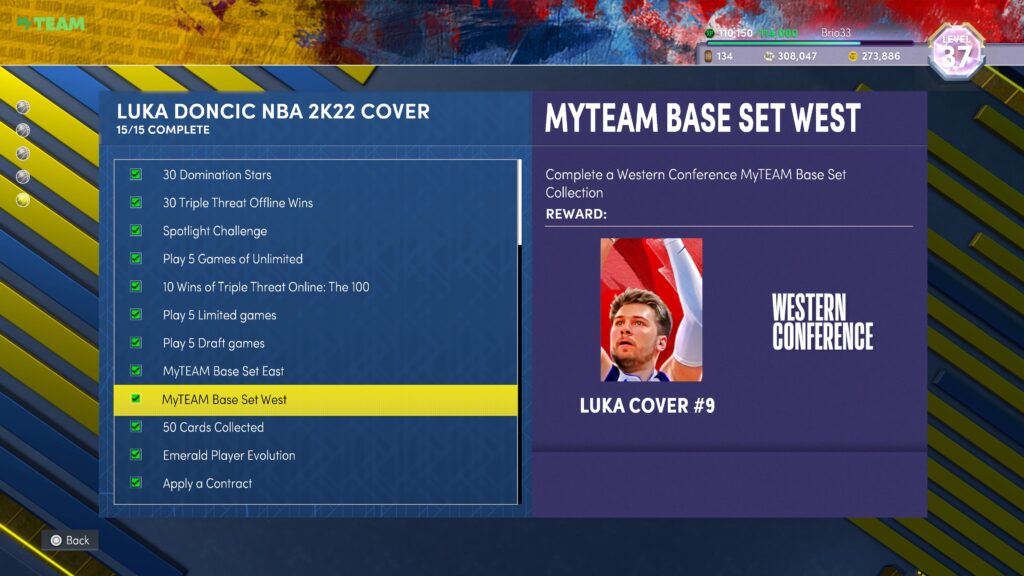 Hey 2K, when’s the next one dropping? It doesn’t even have to be a diamond, I’d just like another player to grind for.

Speaking of grinding, let’s start here. Despite no dramatic changes to the system, XP is still the best addition to MyTeam in years, and I love strategizing my time around earning it. Unfortunately, the rewards aren’t any better or more frequent than last year, but XP amounts across the board are much higher. 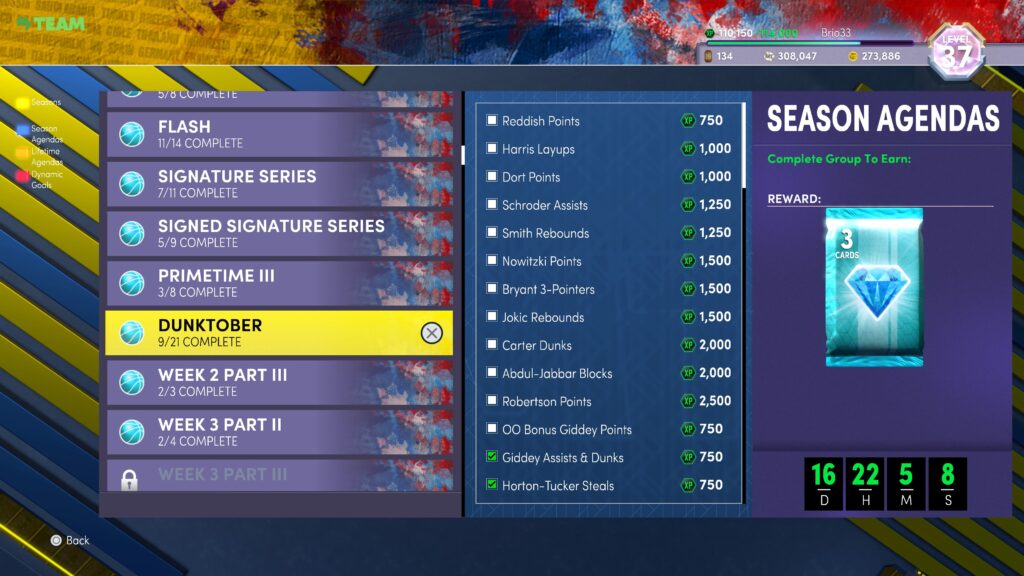 This time last year, I gave up on getting pink diamond reward Stephen Curry very early on because the task just seemed too daunting. This time around I really wanted to make sure I got Carmelo, so I went hard from the jump, and thanks to the increased XP I should have him in the next couple days or so. I hope this is the norm for 2K22.

Another improvement is that in the Ascension you don’t have to start over each time you unlock one. That’s amazing, but again, the prizes overall should be better, especially on the final board. I was fortunate enough to get Marques Johnson, and he’s fine, but other than that I just hit a bunch of 250 MT spots and emerald player packs. 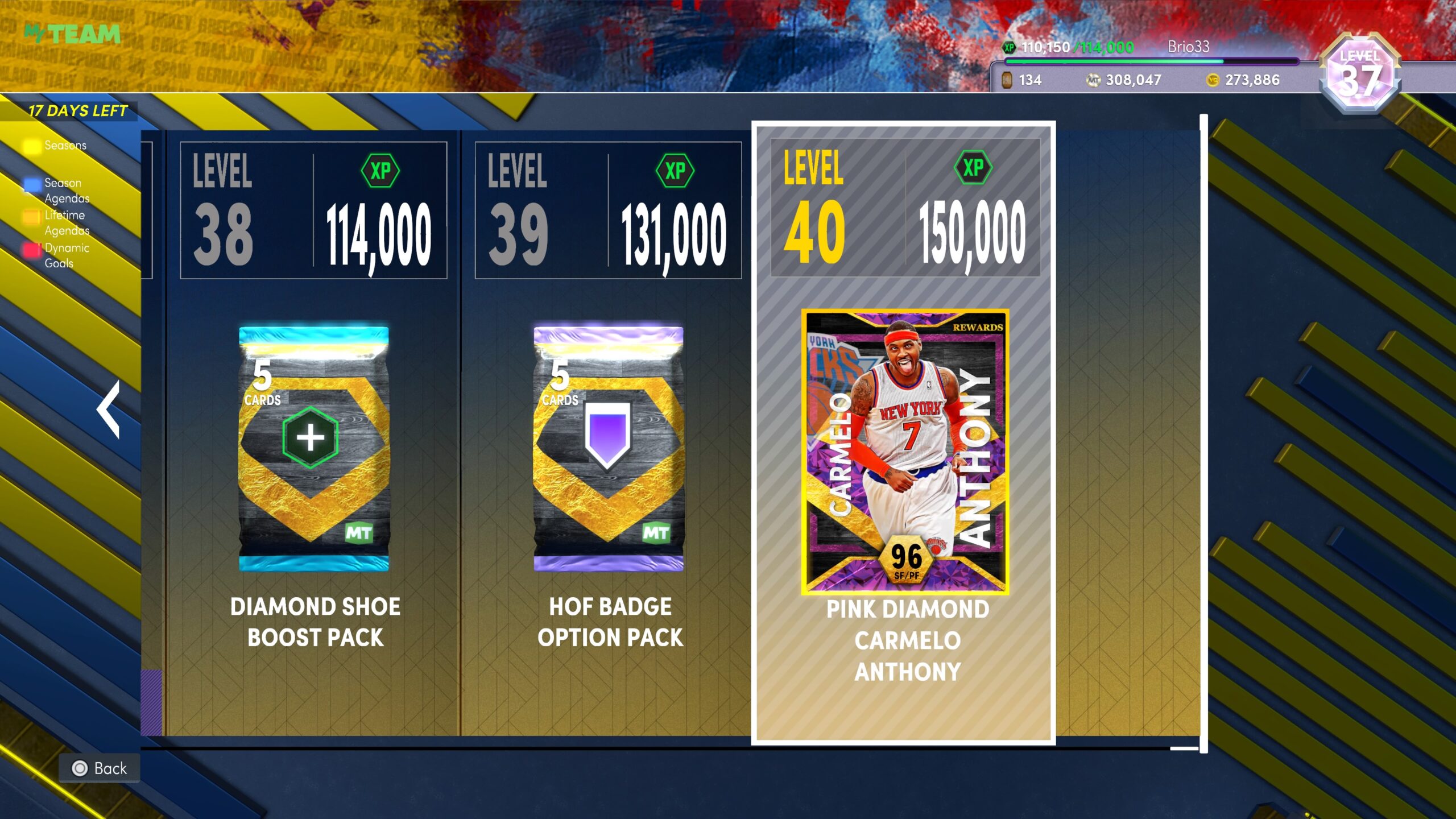 And finally, I’m a huge fan of option packs, and I am really excited about the Hall of Fame badge option pack waiting for me on Level 39. I’d love to see more of this kind of thing implemented, particularly with reward players, just so everyone isn’t using the same cards (I’ve seen Brian Winters in Triple Threat Online so many times that I’m tired of his face). Plus, any opportunity to give players a strategic choice that impacts their lineup is a huge win.

The first couple days of MyTeam this year were tough for me. Between learning the ins-and-outs of new gameplay mechanics and having to rely on emerald and gold players, I lost a lot of games.

2K touted the new and improved defensive mechanics, and so far I’m loving them (and gameplay overall this year, honestly), but man sometimes it was (and still is) tough to score points. Maybe I was just used to my juiced Dark Matter cards at the end of 2K21 and got complacent, but it did seem like the game balance was off at first this year. Now that I’ve got better cards, though, gameplay feels great. I just worry about how the crazier and crazier cards will impact what is really a nice feeling game right now. 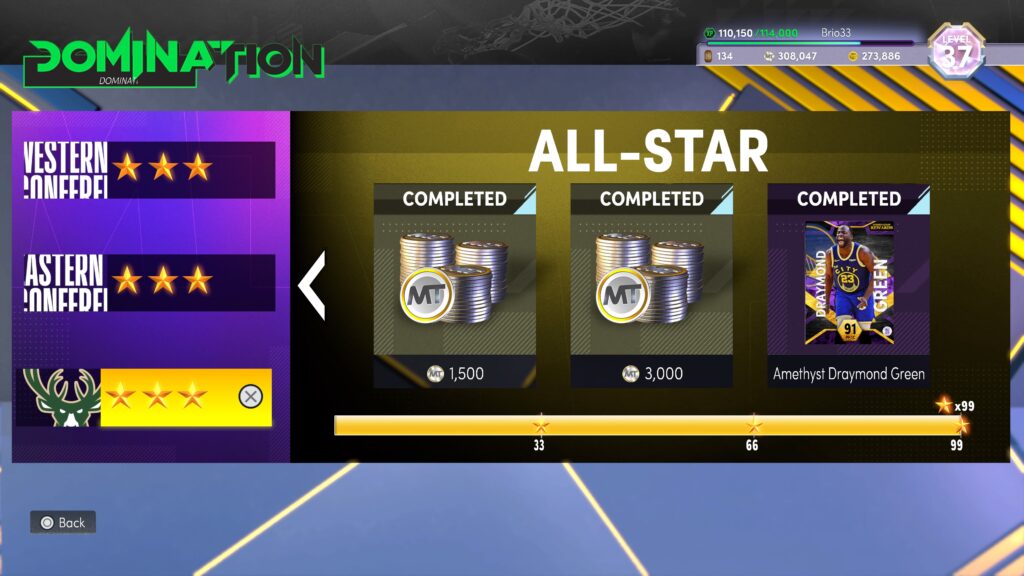 But back to MyTeam specifically, Domination has been really fun and rewarding (though I’m definitely not going to waste time evolving emeralds and sapphires to get diamond T.J. Warren at this point), and the Challenges were plentiful to start. As I mentioned above though, instead of just giving us Draymond Green, give us options so we can cater to our own lineups and play styles.

And it doesn’t have to just be player cards (though that would obviously be preferred). Maybe some people would be more inclined to grind Domination if instead of Draymond they could get a Hall of Fame badge option or a diamond shoe boost pack. I’m trying to hoard HOF badges to add to Carmelo once I hit Level 40, and as much as I love Draymond Green in 2K, at this stage I might make a different choice if given the option. And I would think that the more mental real estate 2K can take up inside a players’ head, like contemplating pros/cons with certain rewards or planning down-the-road moves, the better.

Overall, though, I’m primarily a single-player guy, and as long as 2K keeps adding stuff to do to help build up my squad (more Spotlights please!), I’ll be happy.

Dr. Dunkenstein And The Multiplayer Modes Of Madness 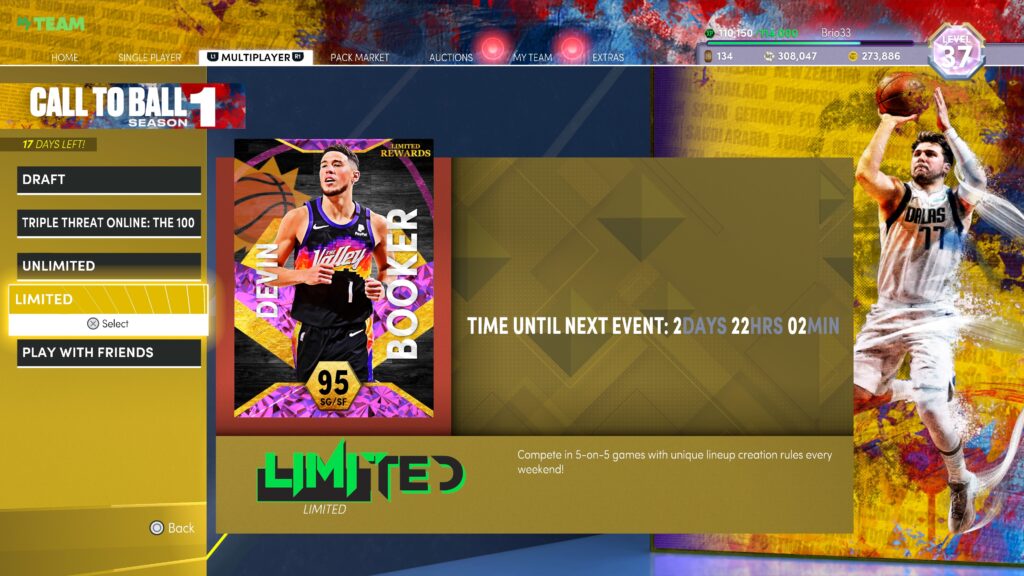 First of all, the gameplay improvements have made online modes way more satisfying for me. I still suffer from terrible delay or lag or whatever server stupidity is going on, but the more I get used to it, the more effective I am at frustrating other teams and getting into my own offense.

And what is my offense? Well, it’s still a work-in-progress.

Last year was all about hunting threes or rim running, but so far this year that kind of stuff is more manageable from a defensive perspective, so it seems like people are playing with more variety. This is great, as it’s definitely more fun to try and solve an opponent over two or three quarters than to gird my loins for more Curry-sliding nonsense.

In that spirit, my goal this year is to do something different each quarter to try and keep my opponents guessing, and that has included something I never really have utilized in 2K before: he mid-range game. 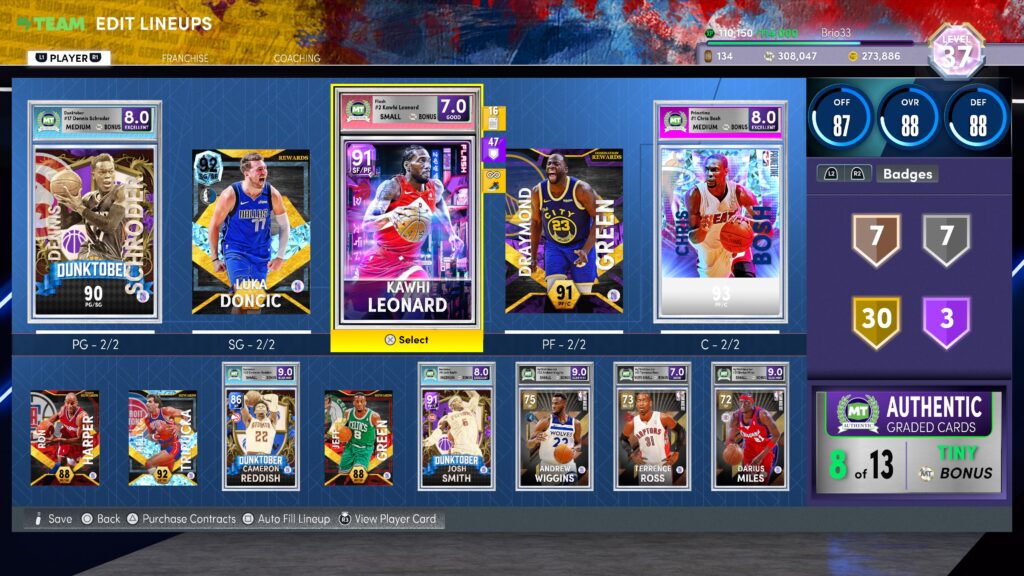 I was fortunate enough to find an amethyst Kawhi Leonard with a couple of extra HOF badges on the auction house, and he might not be the fastest card around, but he sure is deadly in the mid-range once you master his shot release. Then, most importantly, once folks I’m playing against see that I’m trying to get Kawhi to his spots, they adjust (or sometimes panic) and then that opens up 3-pointers. The one area I’m still struggling with, though, is getting to the rim. Blocks seem a little OP this year, and there’s a lot of savvy players who are taking advantage of that. So once I figure out how to rim run (which I’m guessing will revolve around mastering Pro Stick layups and the dunk meter), I think I’ll be in good shape.

That all being said, I’ve gotten my ring each week in Limited thus far without breaking any controllers, and have won a decent amount of Triple Threat Online games when I’ve needed to for XP challenges. (It’s probably helped that a lot of people are running Jazz players for the Darrell Griffith challenge, and there’s not a lot of great Jazz players to choose from right now.)

But speaking of TTO, they really messed that mode up this year in my opinion. 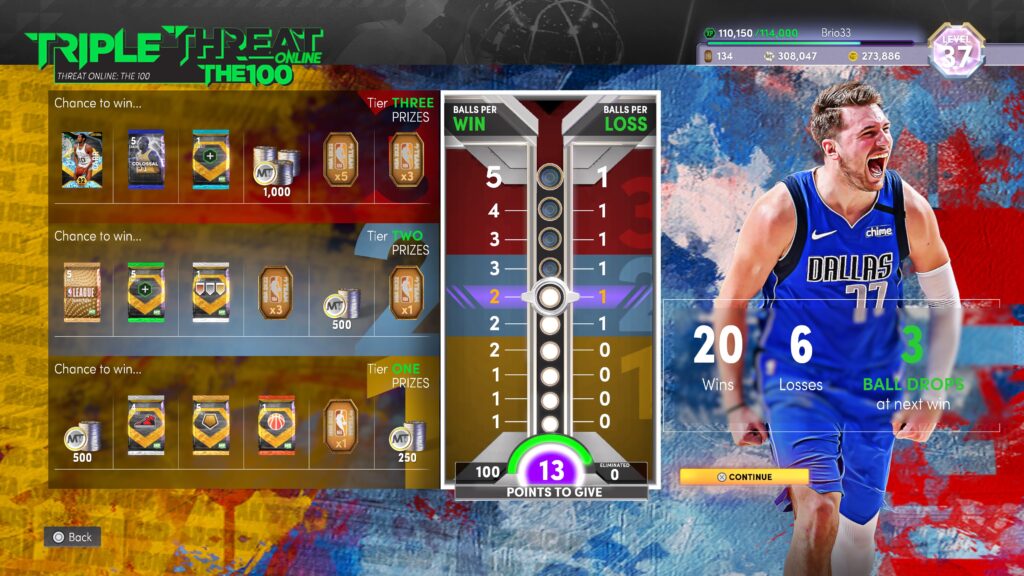 I like the idea of “The 100” (if you don’t know, once you give up 100 points across multiple games you start over on the prize board). In theory, I think they wanted more players to at least get to the middle board, which is a nice thought, but the downside is that sometimes you’re punished for winning. I’ve won a fairly high amount of my games this year, at a higher percentage than previous years by far, but I play a lot of close games.

So, I have yet to even sniff that top board, which is extremely frustrating.

The simple solution here seems to be to just reward a player for winning. If you win, you shouldn’t lose any points, regardless of how many times you were scored on. That way if I gut out a close game, I can still move up instead of feeling deflated that I didn’t keep my opponent to under 10 points or whatever. Yes, more people would climb up to the top board and have a better chance at the top prize, but it’s not like the ball drop odds are great anyway, so I don’t think you’d see many more people walking out with the diamond card. The same can be said for pack odds being terrible, even if you get lucky with a ball drop for a Colossal pack.

Either way, players should be rewarded for playing the game.

Whatever they do with TTO,  I still don’t know how much I’d really ever play the mode, as one of the most heartbreaking feelings in 2K is getting lucky enough to get all the way to the top board and only seeing one token, 250 MT, and a badge pack. But as long as I have to do things like win TTO games with three Jazz players, I guess I’ll be there when I need to be. 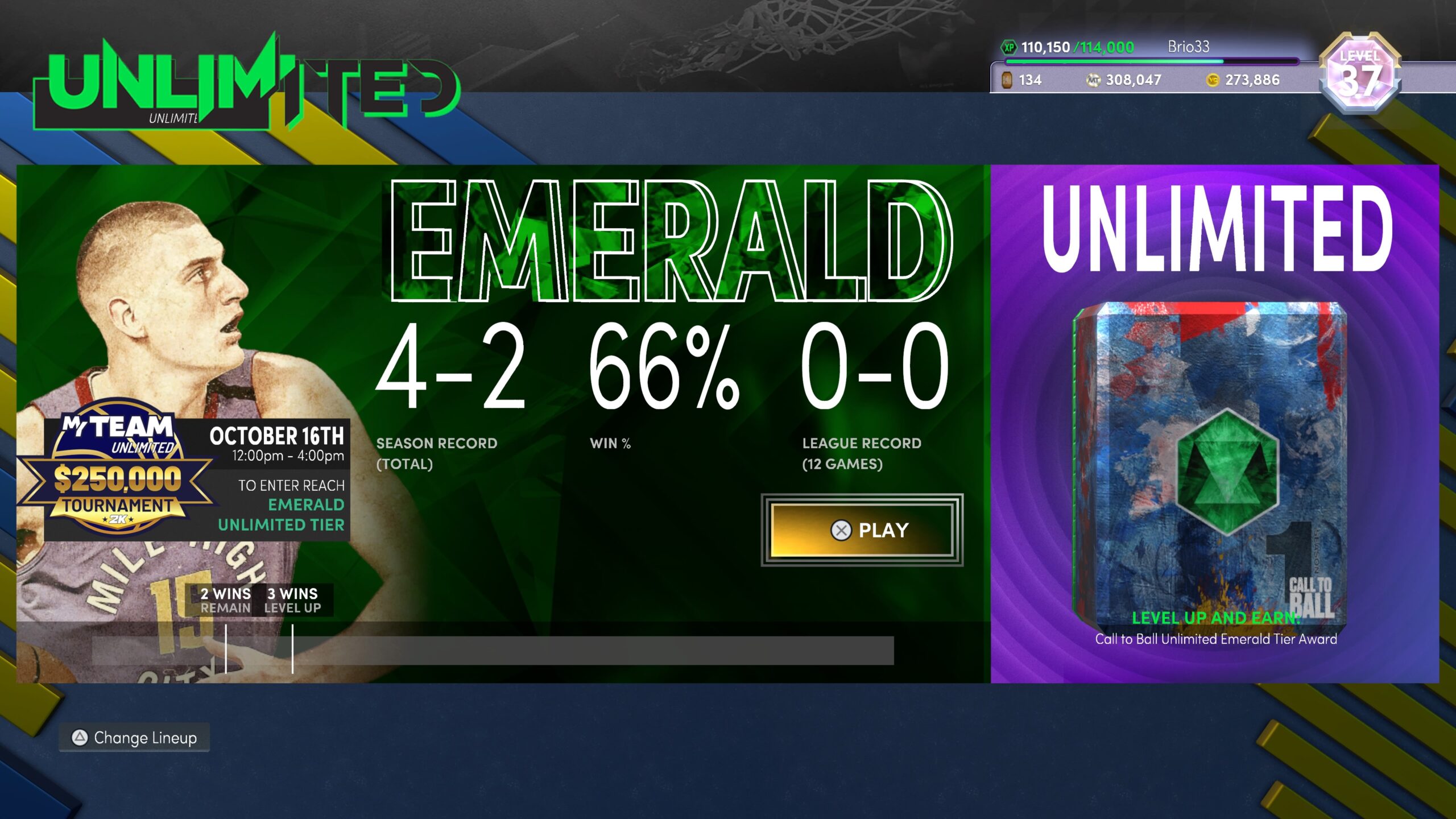 Then there is Unlimited. Simply put, thanks but no thanks. It’s just too many games for too few rewards. Wilt looks nice, but he wasn’t worth it in week two after diamond Dikembe came out. And now that there’s a pink diamond Kareem in packs, it’s a big fat no. Beyond that, the matchmaking is better now, but that also means it’s even harder to even get the top reward because now you play opponents who are on your level more often. All in all, the rewards system in Unlimited is bad and got worse this year.

Regardless, with Darrell Griffith I just have to play the games. I can tolerate that because I can at least grind XP while I’m doing it. But I think it would be great if an XP-like system was implemented for Unlimited, as in, climbing up the ladder got you specific cards and prizes instead of random boxes with mostly garbage. I’m definitely not good enough to go 12-0 for Wilt at the end, but I might be more inclined to grind earlier tiers if there was a new, unique amethyst or diamond card available — instead of (probably) getting something like a base set Artis Gilmore.

And last, but certainly not least, there’s the bright and shiny, brand-spanking new, highly-touted Draft mode. 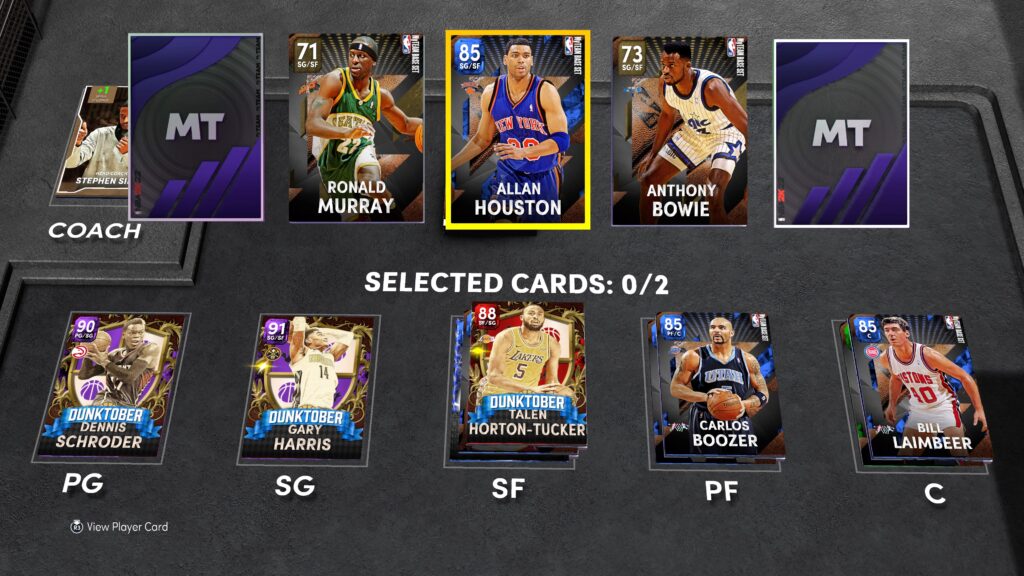 I’m not really a fan.

Maybe as more cards are included, I’ll try it again, but I know I’m not winning enough games to get the picks I need to get the pink diamond prize (though implementing an Ascension is a nice idea). I’m also just tired of playing with the same base set emeralds and sapphires.

The main reason I’ve played it thus far though (beyond unlocking Luka), was to work on XP for cards I didn’t want to buy. The first week I was able to get my D’Angelo Russel XP done just through doing the Draft, and I might still be doing it for newer cards if the Draft tickets weren’t so scarce.

Having the mode cost VC after you’re out of tickets is as demoralizing as a Mutombo rejection, and that needs to be fixed asap. 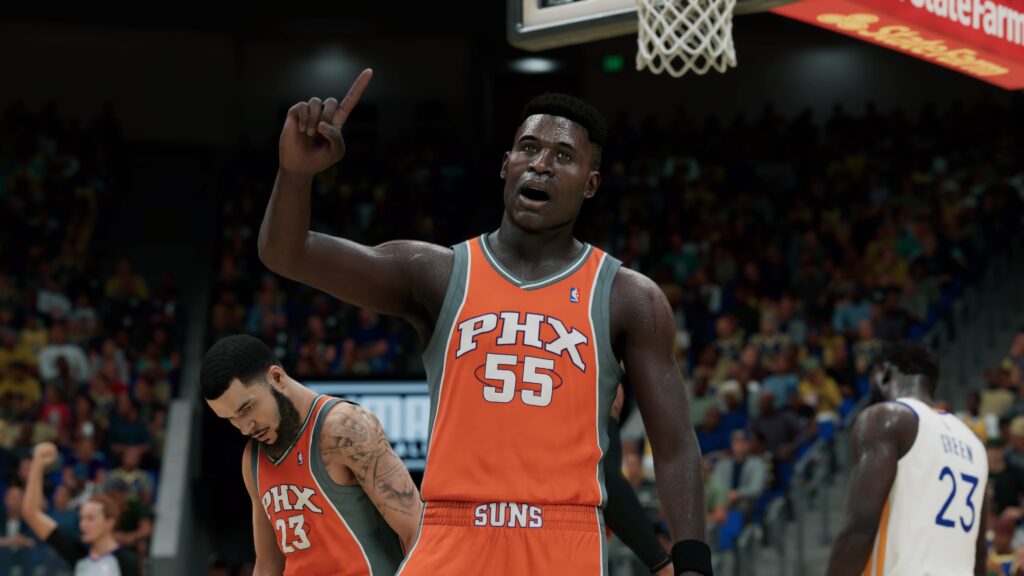 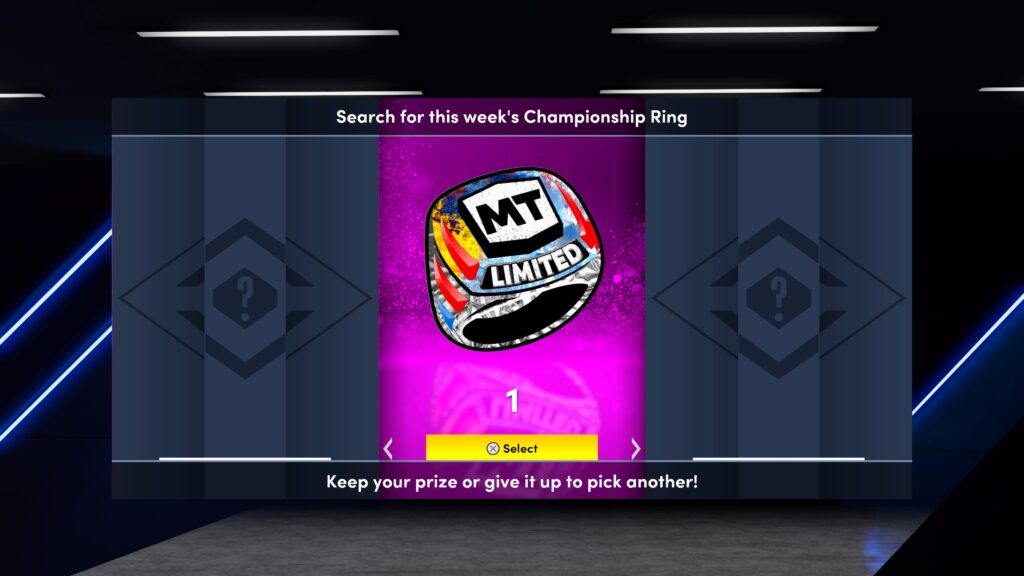 It’s shaping up to be a pretty good (possibly even great) year in MyTeam. This is a living, breathing game mode that’s hard to review after only a couple of weeks, but the foundation is solid.

We’ll see what kind of gameplay changes 2K makes going forward. (They always seem to eventually tweak things.) And I’ll keep my fingers crossed that content continues to be solid in Season 2 and beyond, as honestly that’s really the most important thing to keep MyTeam humming. Minor gripes aside, right now I’m having a lot of fun with the mode and playing it often, so I guess that speaks volumes.

How about you, how are you liking NBA 2K22 MyTeam so far this year?