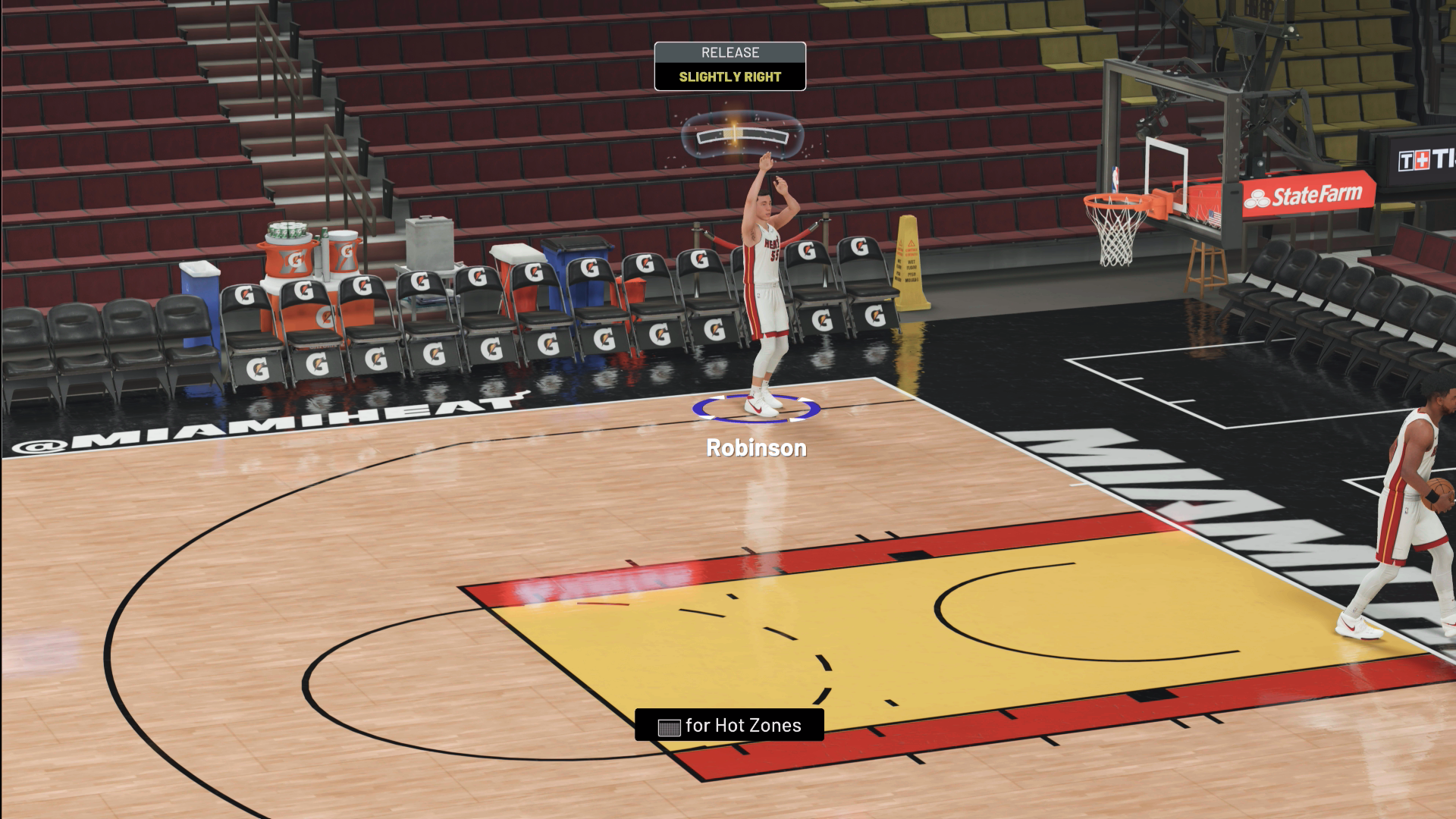 Specifically, the aimbot methods should be minimized somewhat (again, this is a not a new issue so no one thing will completely solve it beyond removing “perfect” releases basically), and the power rankings for the best methods for how to shoot have probably been shaken up a little bit as well.

DBG has the cleanest breakdown of these changes, and he backs up the feeling I have thus far that more or less boils down to the “aiming” system being reverted to where it was when the game was launched — with a couple exceptions.

What’s different here is that there were other patches in the interim, so it doesn’t mean aiming is the “best” method once again. It’s more nuanced now where no meter and button pressing still seems logical if you really trust the release of a player. From there, it’s more about personal preference between meter aiming and meter button. Oh, and yes, aiming on faders still makes the most sense since you have the most time to adjust on those shots before locking it in with L2/LT.

The nice thing about the aiming system being reverted to being closer to how it worked at launch is that the old tutorials that explained the best way to maximize your chances now work again (for the most part). You can go back to just trying to pull the stick straight down and adjusting from there to have some solid success.

Still, I think there are some added differences here due to the speed at which you pull down the stick still factoring into things, and Sam Pham shows that off in his own tutorial he came out with today.

In this tutorial, his method for a high percentage of green releases relies on slower jumper animations and doing a slow pull back on the stick with a hitch before continuing that pull back. He does this because the slow vs. fast stick “pull down” while shooting does still appear to change the general areas where the meter will be. This means the slow pulls will result in the meter being on the left side, and the fast pulls will still show up on the right side.

However, testing out just holding the pro stick in the same spot and calling for the ball over and over did still change the window enough shot to shot that you couldn’t just keep the stick in the same zeroed out location every time and succeed. This may have something to do with 2K slightly tweaking the area on the meter that’s the designated green zone no matter what shot to shot, or it could be related to the exact spot you are on the court. I could not quite tell because in testing you still move slightly shot to shot even if you’re trying to spot up.

Shooting Has Changed Too Many Times Since Launch

Now, there is some amount of controversy here because I’ve seen some claims that a “hot fix” already happened today that reverted things so you don’t need to pull down the stick at a certain speed to get the meter to show up certain places, but I don’t see that in my regular online games so far. (Full disclosure, I have not played Park/Rec since the patch so it could be showing up there perhaps.) The confusion aspect ties into the last point I want to discuss here and that’s the simple fact that 2K has changed these shooting systems 3-4 times since the game came out. A 22 GB patch was released just yesterday, and you already have some folks claiming a new “hot fix” came in today. That could just be the internet being the internet, but also it’s partially the fault of 2K constantly changing things — and sometimes not always being very clear about when the change happened (see: Park handles now being activated by L3).

This is not me saying 2K should let things stay broken, but I have a hard time saying the shooting changes that have happened since launch have made the game appreciably better. Are we really in a better spot with shooting than we were when the game was launched? I would argue that we are not, and a lot of these changes all began because people just wanted a buff to button shooting. Yet, here we are a month into the game, and we still have folks who are just trying to figure out how to shoot.

Shooting is fundamental to every basketball game, so we shouldn’t still be trying to decipher how to do it a month after launch.