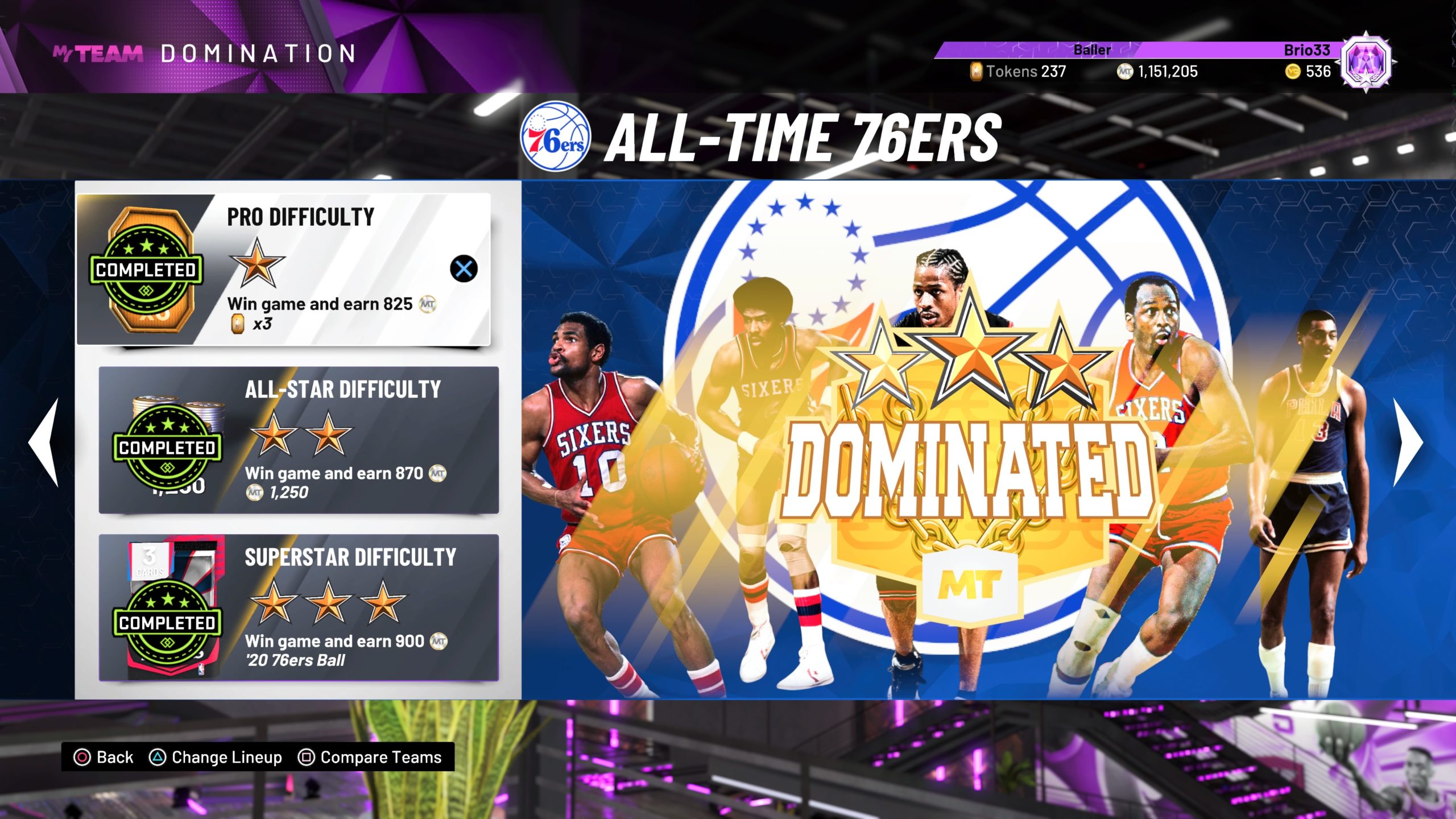 It’s August and NBA 2K21 is less than a month away. Yet thus far, next year’s game is still a mystery outside of a trailer here and there. So now seems like a great time to do some wishing and hoping, plus offer a little constructive criticism on 2K20.

With that in mind, I want to start my NBA 2K21 MyTeam wishlist off by discussing my preferred way of playing MyTeam, which is through the single-player offline modes. 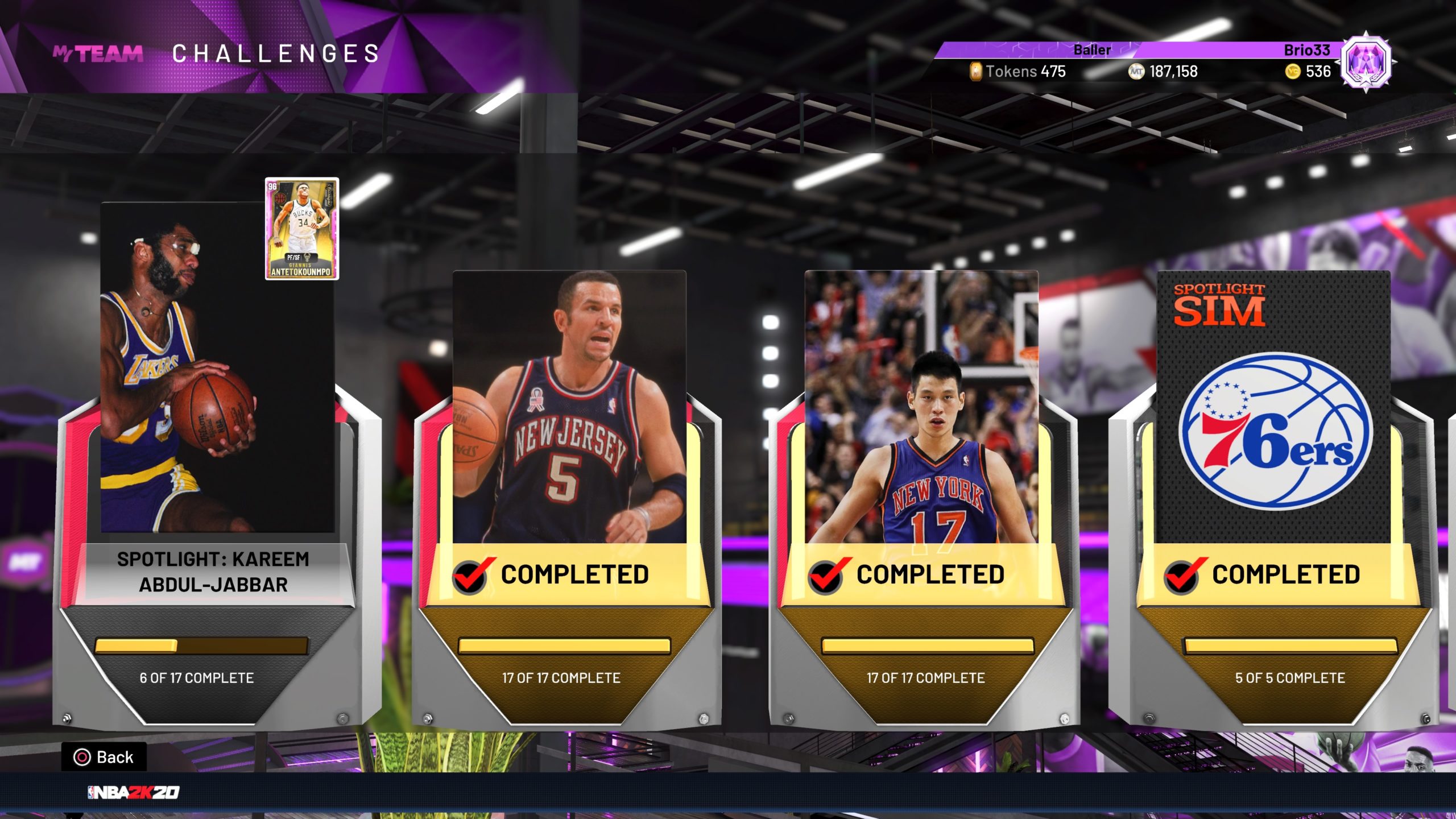 The first few sets (released with evolution cards like Wade, Garnett, Abdul-Jabbar, etc.) had some insane requirements to advance, and getting through 17 games was a lot to ask.

I only did it a couple of times, and for cards I really cared about like diamond Steve Francis.

Then regular Spotlight Sims and Historic Spotlight Sims came along, and those made the 17 games to get Francis feel like a cakewalk. (I still haven’t gotten Kobe yet.) Plus I know a lot of people complained about having to utilize cards from a certain team, though I actually enjoyed that challenge. 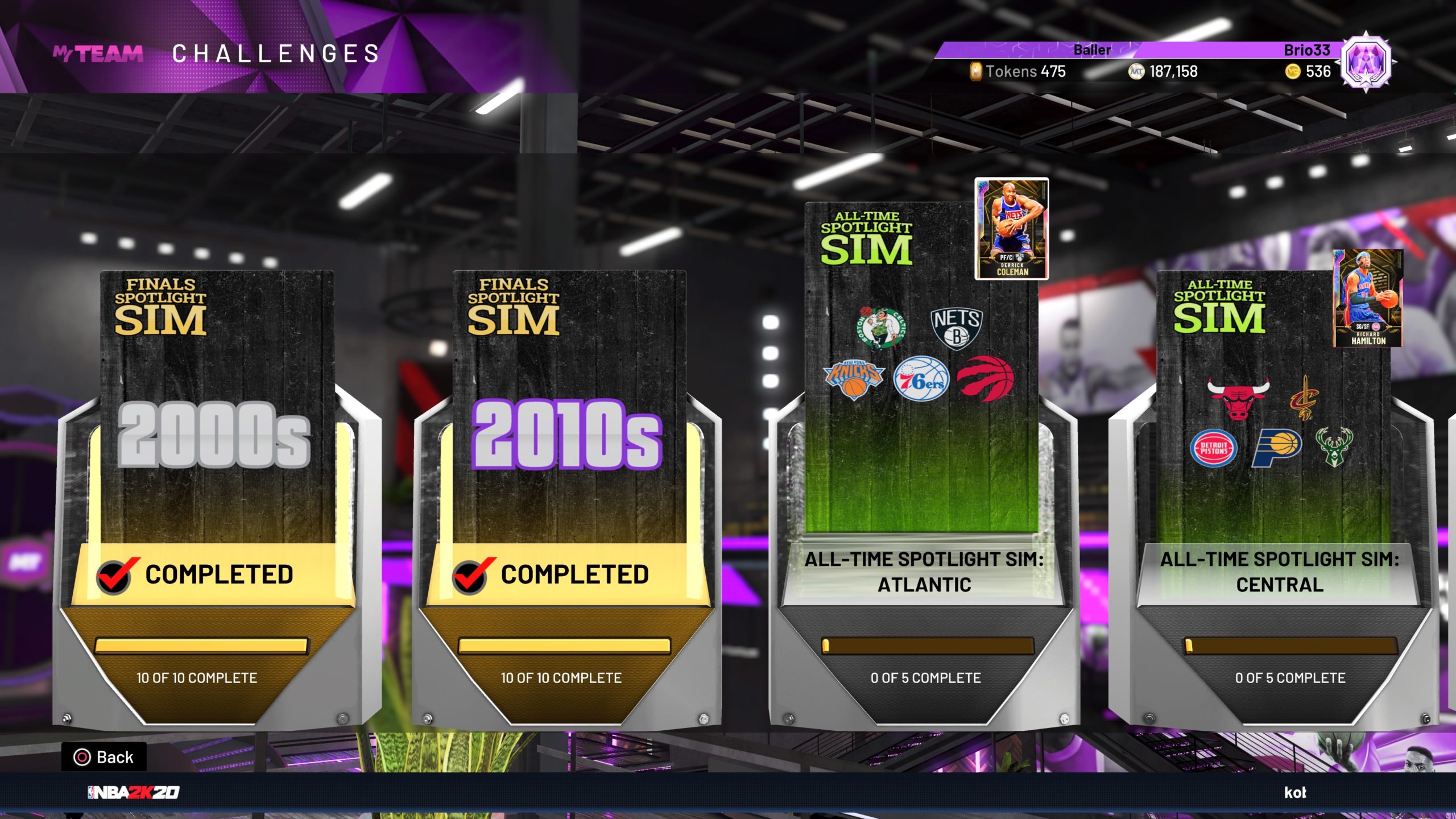 But to 2K’s credit, they continued to tweak the challenges. By the end of the year, they definitely figured out the right balance of grind/reward, and it was ultimately my favorite thing about NBA 2K20 MyTeam.

Some of my favorite cards came out of these sets, and as I’ve mentioned before, it’s extremely satisfying to win games with cards you earned the old-fashioned way. 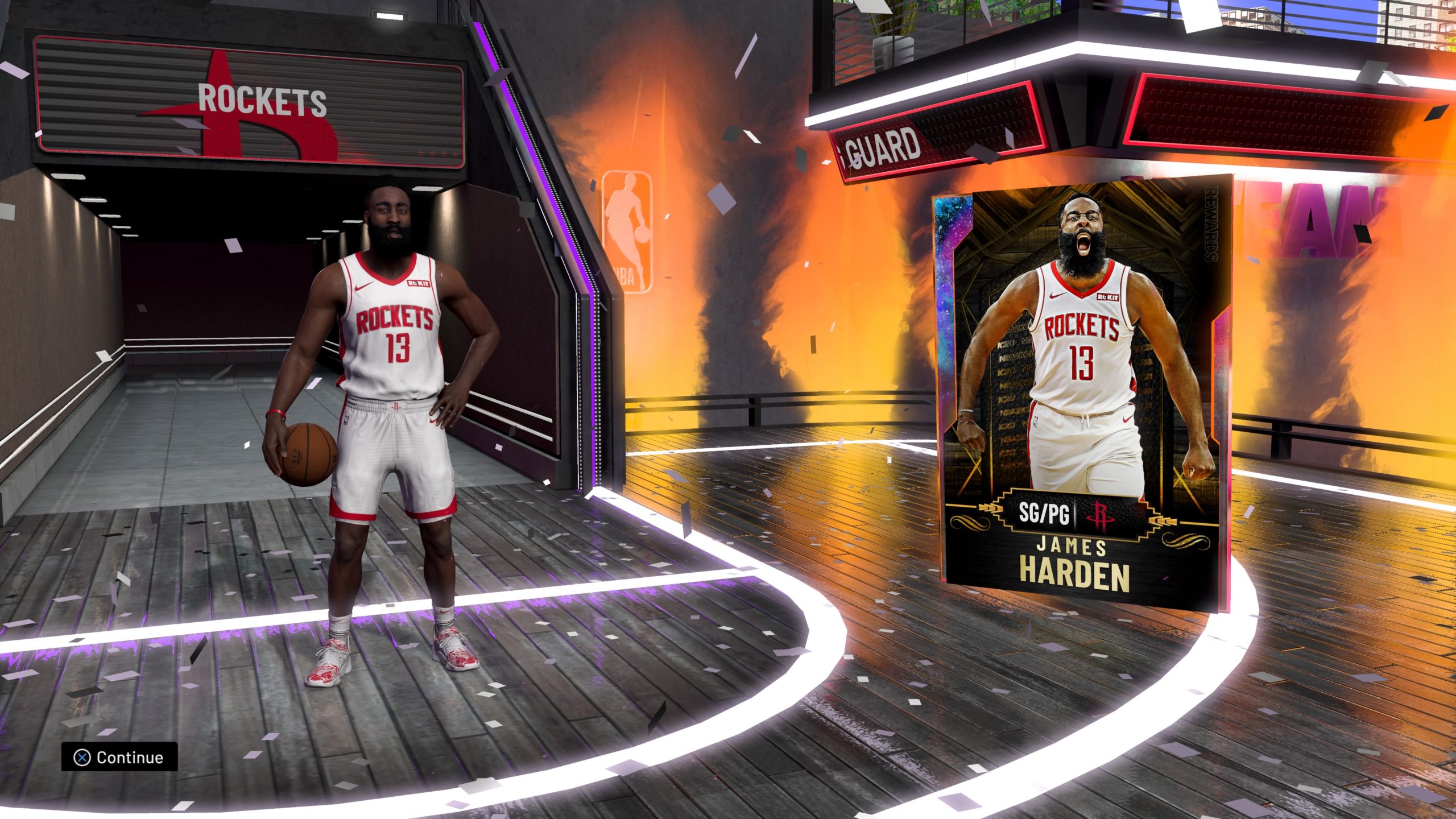 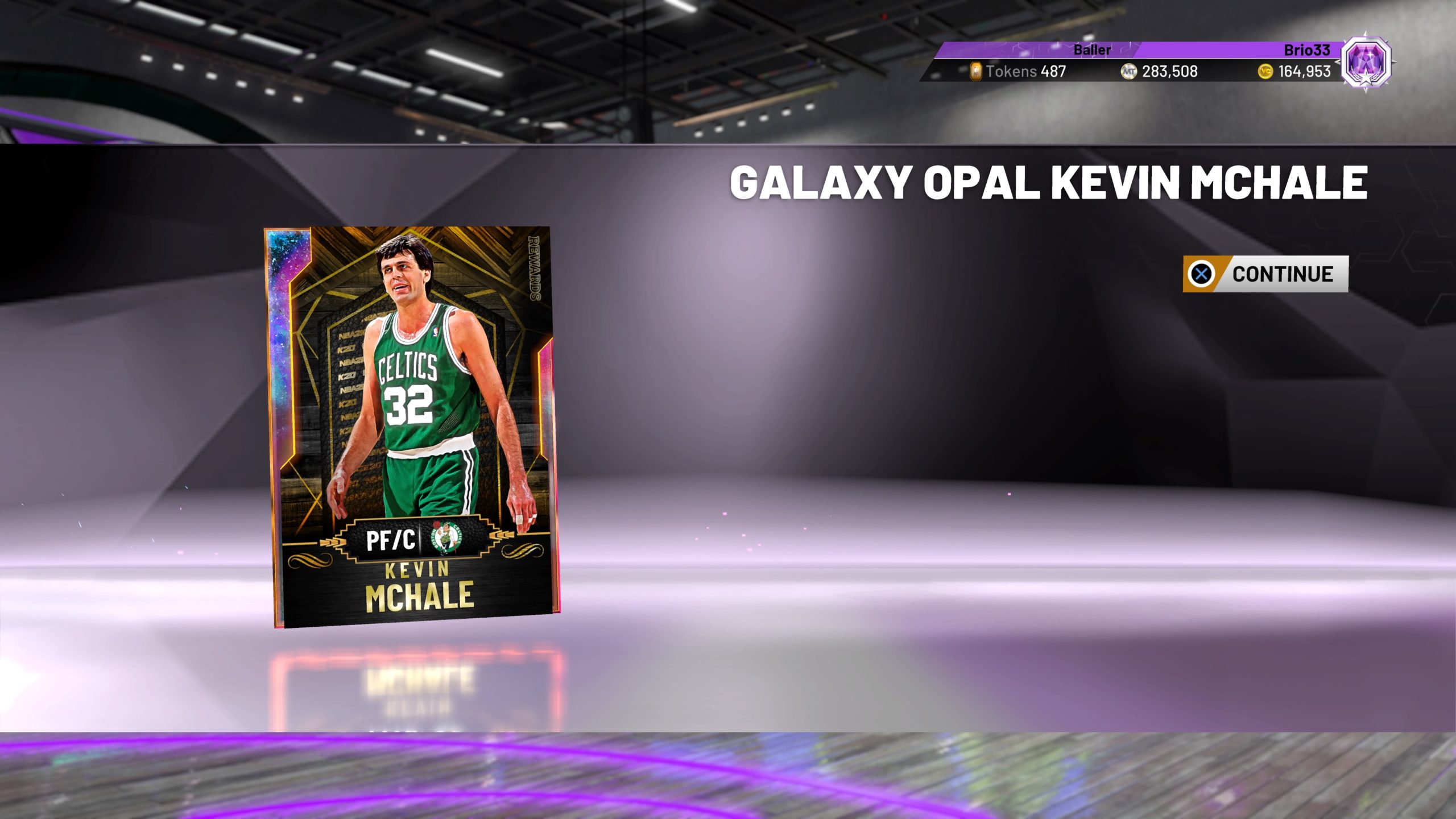 My only suggestion going forward would be to figure out a way to weave a narrative into the challenges.

The original sets attempted to do this (as they kind of followed a player’s career path), but hopefully there’s a way to take it further. Maybe by continuing to dive into players’ careers, or maybe by centering them around the history of various teams? Or what if, for example, there was a set of Spotlight Sims solely about international players, and their impact on the league? The path to Giannis is a long and complicated one (Drazen…Dirk…Darko?), and I’d love to learn more.

Either way, I look forward to seeing how this continues to evolve in 2K21.

I wonder how many people actually kept up with the Weekly Challenges this year? 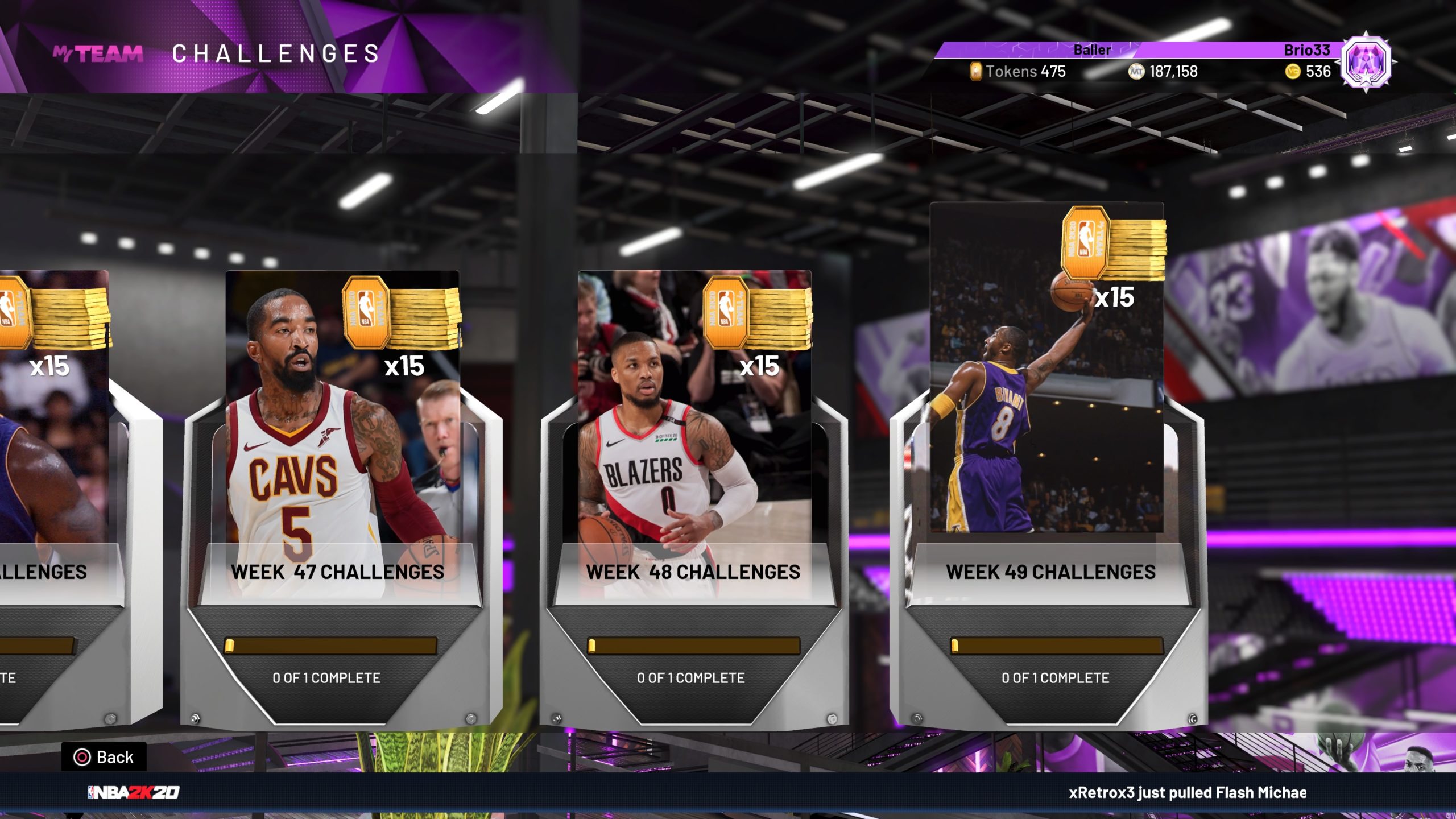 Towards the end of the year, they became a useful way to get some tokens, but early on, they were a bit of a slog.

A couple of years ago, keeping up with the weekly challenges earned you progressively better reward cards, and that was great. 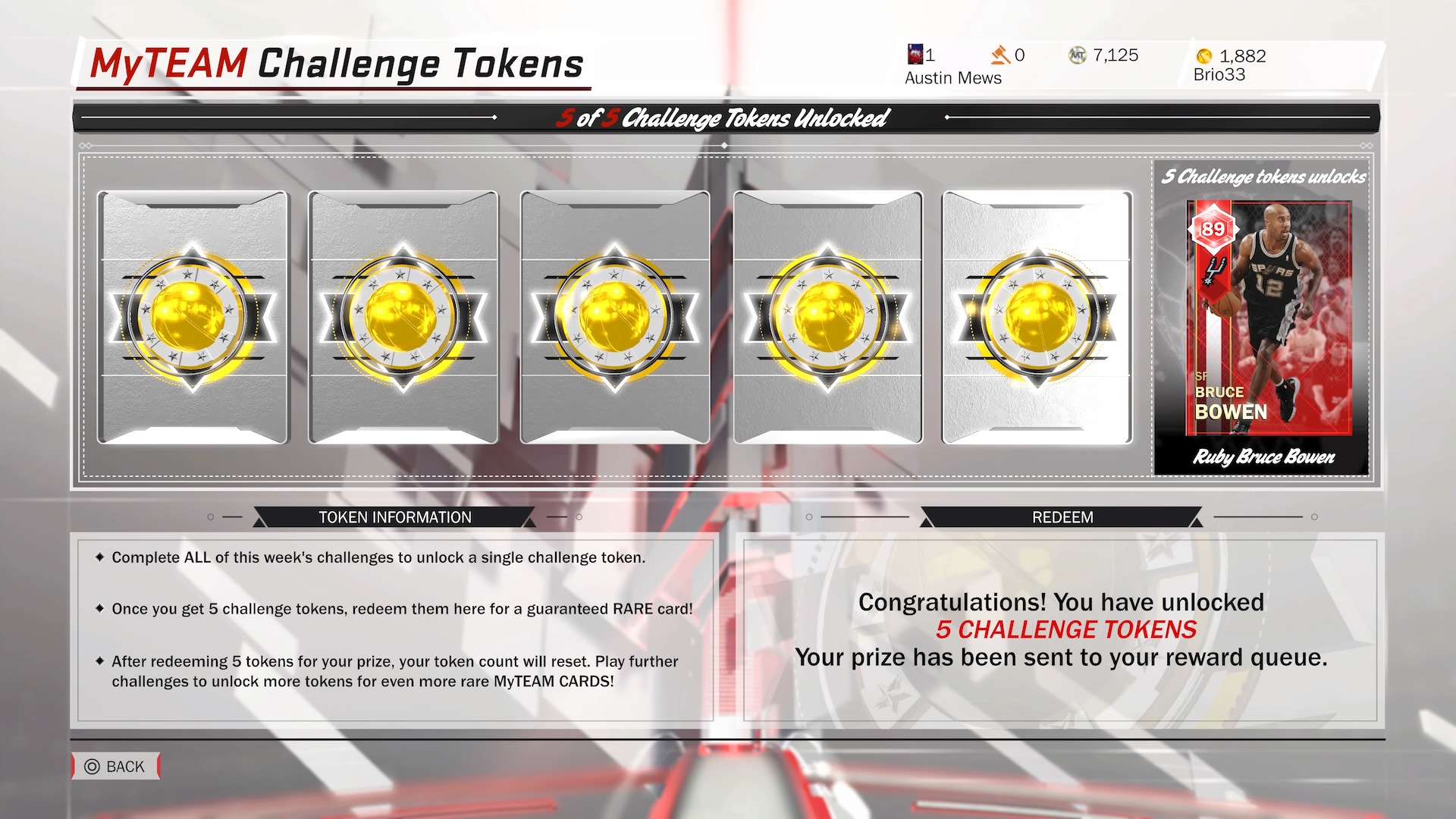 So maybe we can go back to something like that while still keeping the token compensation?

For example, if each weekly challenge is five games, perhaps each game could earn two tokens (for a total of 10), plus a new weekly card for beating them all. Or better yet, these should probably just be three games max, and each game could become progressively harder to make the challenge a little more interesting/worth it.

Then what happened to Moments Challenges?

Those updates basically stopped months ago (probably because the focus turned to Spotlight Sims), but I think there could still be real value in a Moments Challenge. They could be all about unique and interesting one-time rewards, like better cards, higher amounts of MT or tokens, or simply deluxe packs from the previous week’s content drop.

And if the rewards are better, the stakes should be higher.

For example, if I’m playing a single game with the opportunity to earn a one-of-a-kind, high-powered card, then maybe a loss should take me out of the running for that reward? As in, the challenge disappears once the game is over, win or lose, and I’ll never have a chance to earn that reward again.

And maybe a single Moments Challenge could have 12-minute quarters and be against tougher teams, so that we have to put together a full squad strategically and manage stamina for a change.

Or also, in a previous year of MyTeam, there were promises made about having Moments Challenges pop up the day after an amazing NBA moment happened in real life. Off the top of my head I recall having to re-create a Blake Griffin buzzer beater. This was a great idea, and hopefully it can be re-integrated into 2K21.

I’d enjoy a challenge to make a fourth quarter comeback with one of my favorite players, especially if beating that challenge rewarded me with an awesome card for that player.

Before Spotlight Sims, Domination was my MyTeam obsession.

This year, the token and MT rewards were pretty good along the way, but the player card rewards were not as good as previous years in my opinion. 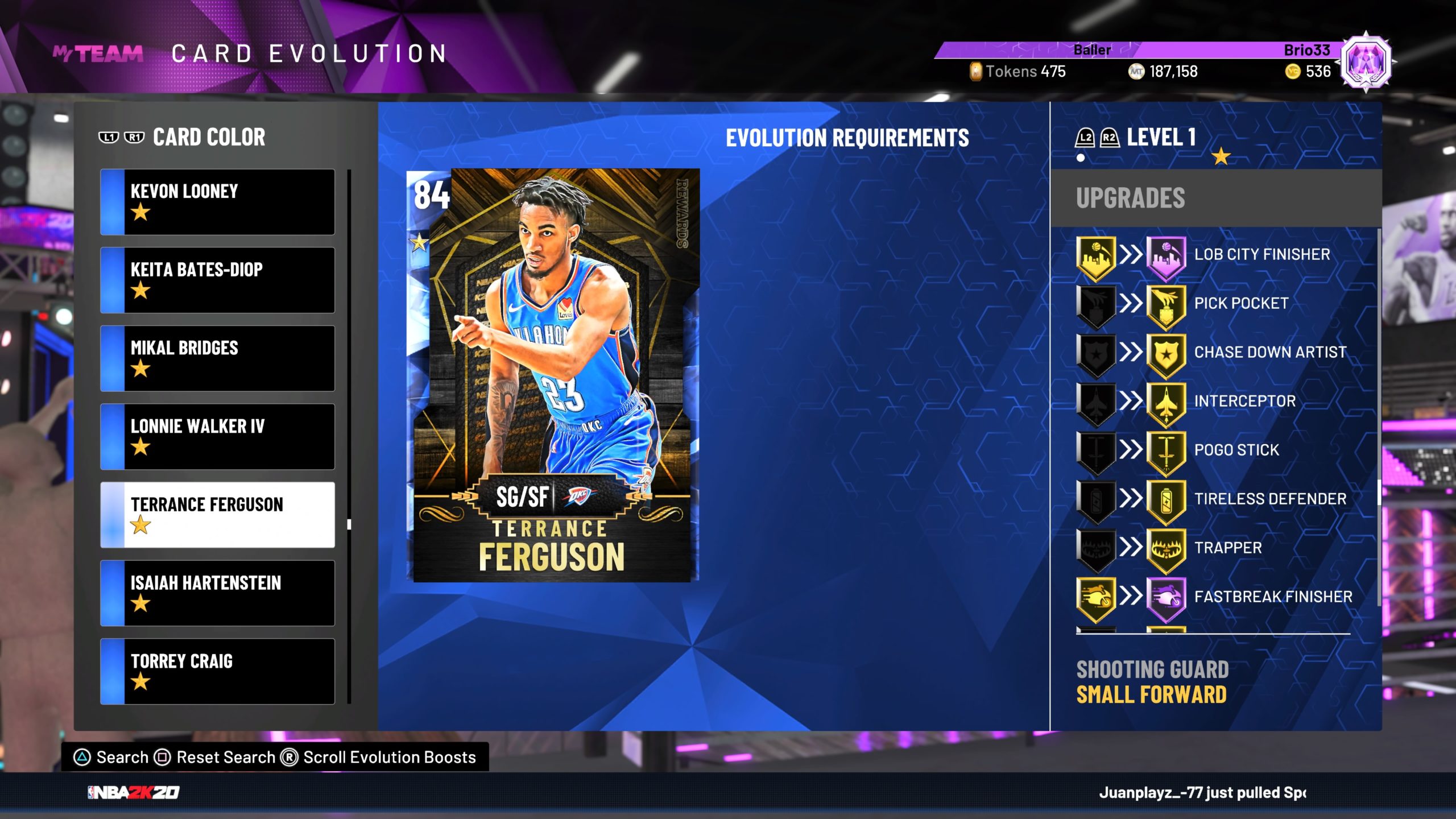 Having the evolution cards at the beginning was a fun idea though while also giving us a chance to try out fringe NBA players.

My personal favorite was the emerald-to-sapphire Terrance Ferguson, who (even way back then) had two HOF badges (Fastbreak Finisher and Lob City Finisher). I had a lot of fun with him in Triple Threat. 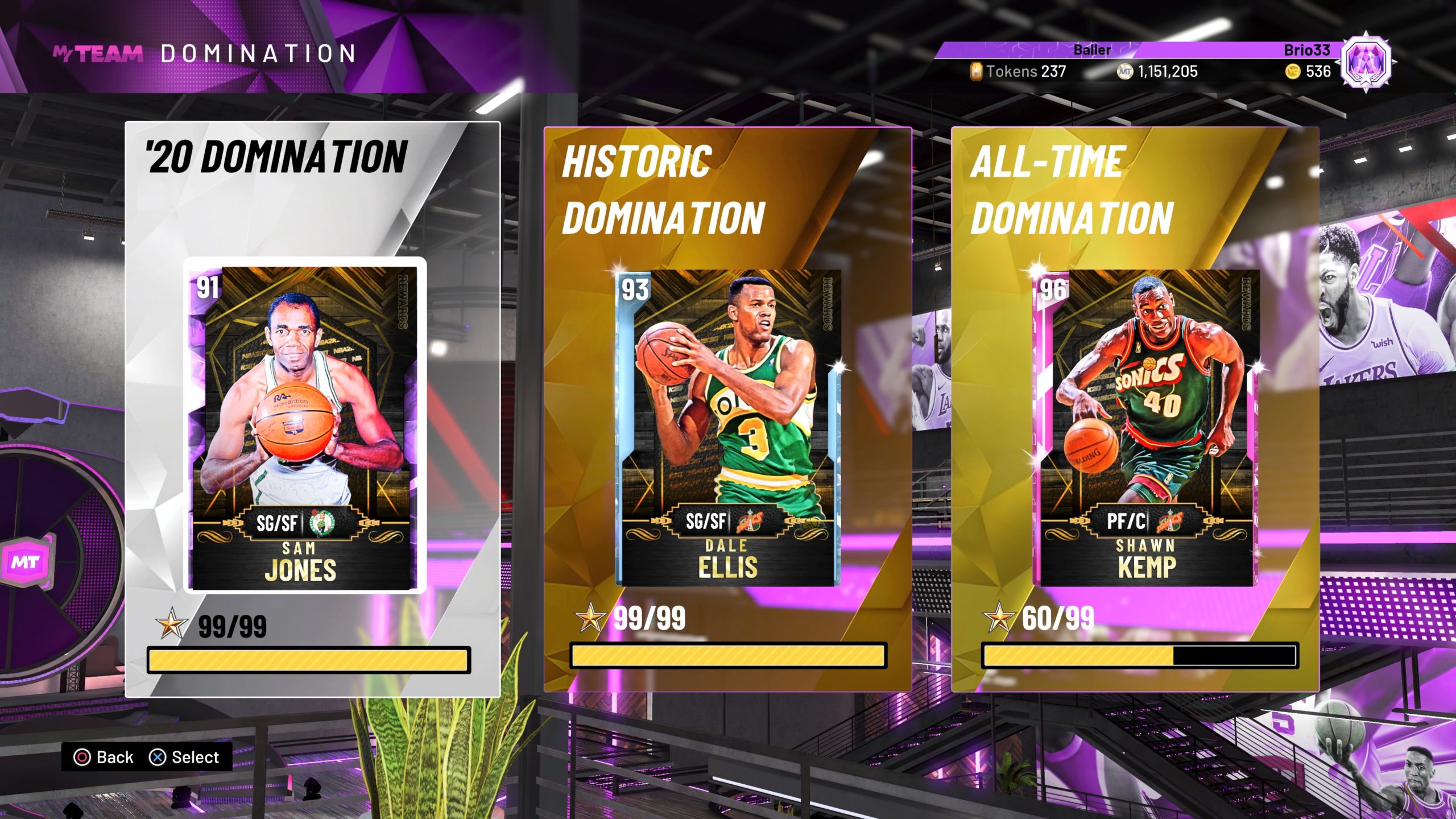 But these final rewards didn’t entice me very much. Even now I still haven’t finished All-Time Dom for that Shawn Kemp, and why would I? By the second month of the game, the cards were kind of obsolete.

I wonder if maybe Domination could be merged with Spotlight Sims (both modes obviously share a lot of the same DNA).

2K could certainly piecemeal Dom out like they did with Spotlight Sims, which might mean that the rewards for an All-Time Dom could keep up with the meta if it comes out a month or two into the season. Or better yet, each month could see a new chapter released of whatever this new Sim mash-up mode is so we as players can expect and look forward to new challenges (and new rewards) on a consistent basis throughout the year.

Plus, maybe we could get a bonus for using some of the same cards (or a certain number of cards from the same team) and reach statistical milestones with those players by the end of a monthly challenge run. If the rewards for reaching said milestones were good enough, it might warrant another playthrough later on once better cards are acquired.

It could also be a competition across the community.

For example, the first person to complete that month’s set of single-player challenges could get extra tokens or MT. Or whoever has and uses a particular card that averages the most points (or rebounds, or double-doubles, etc.) at the end of the month gets a special upgraded version of that card that only they can use.

The sky is the limit here, but basically I’m just looking for ways to make these Sim grinds more engaging, strategic and rewarding.

So obviously there was that slot machine debacle at the beginning of the 2K20 year that caused 2K to delay the launch of Triple Threat.

However, the solution they came up with wasn’t great. 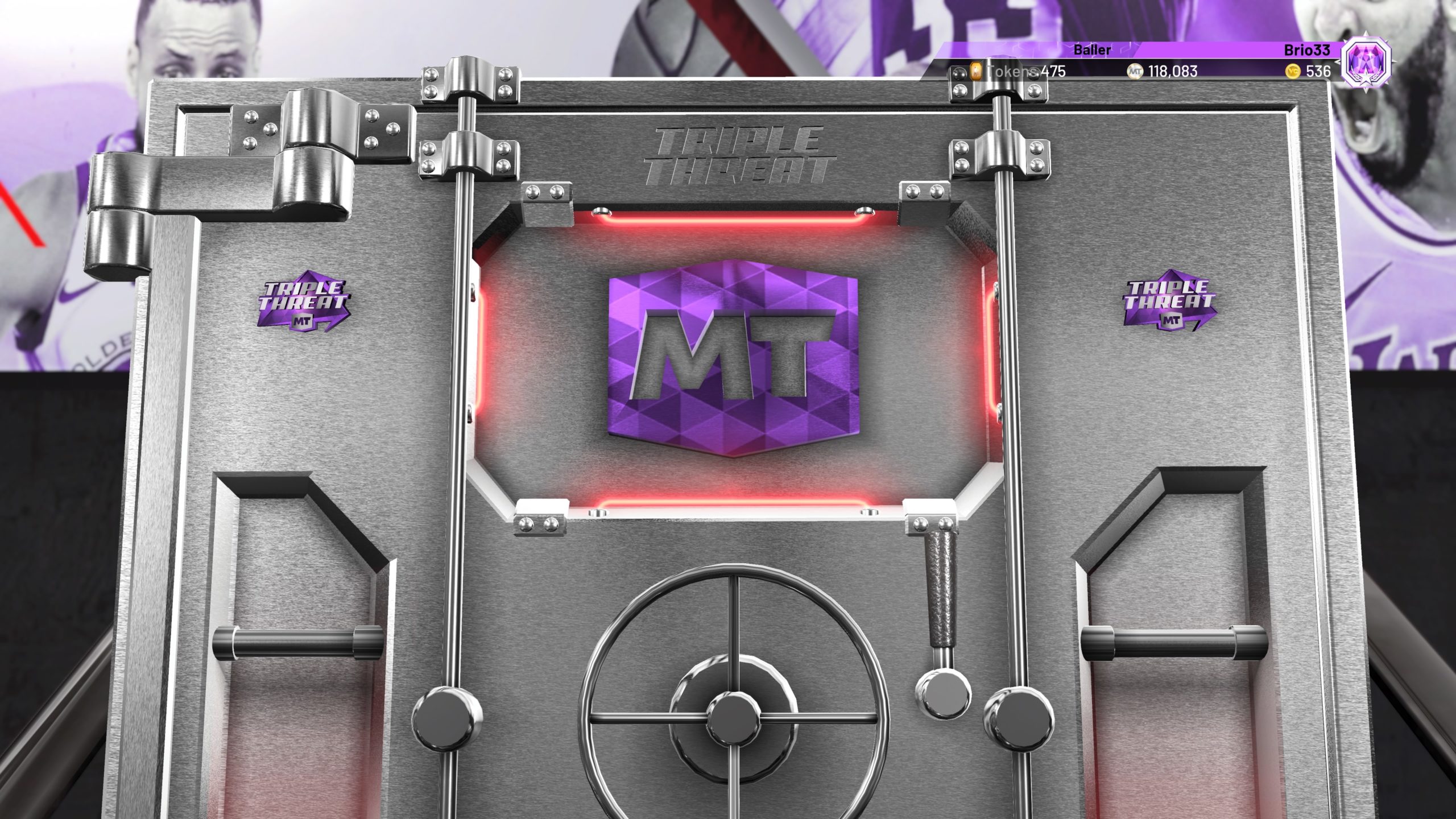 I won 400 games of Triple Threat this year, and I’d say maybe the vault opened once every four or five times. And then when it did open, it never felt all that special.

For me, that’s probably because out of those 400 games, I only ever got one card from the vault. 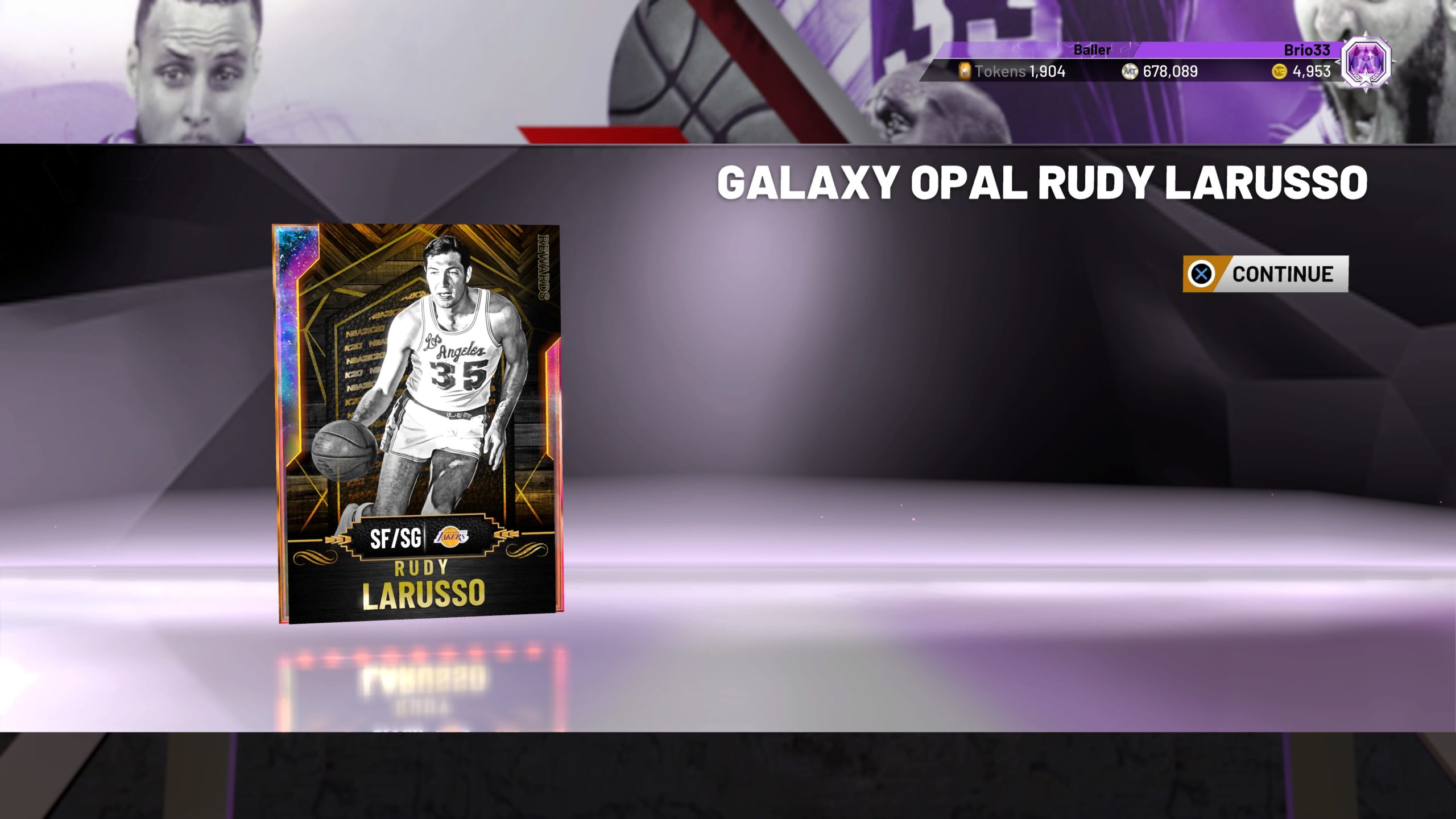 It was at least an opal, but still.

For Triple Threat online, every win at least gets you something. So I wonder why they couldn’t do ball drops for TT offline too? Or if not ball drops, at least something that guarantees better rewards more consistently.

Plus, the cards we got along the way in Triple Threat (especially the higher-tier players for winning hundreds of games) were not great. 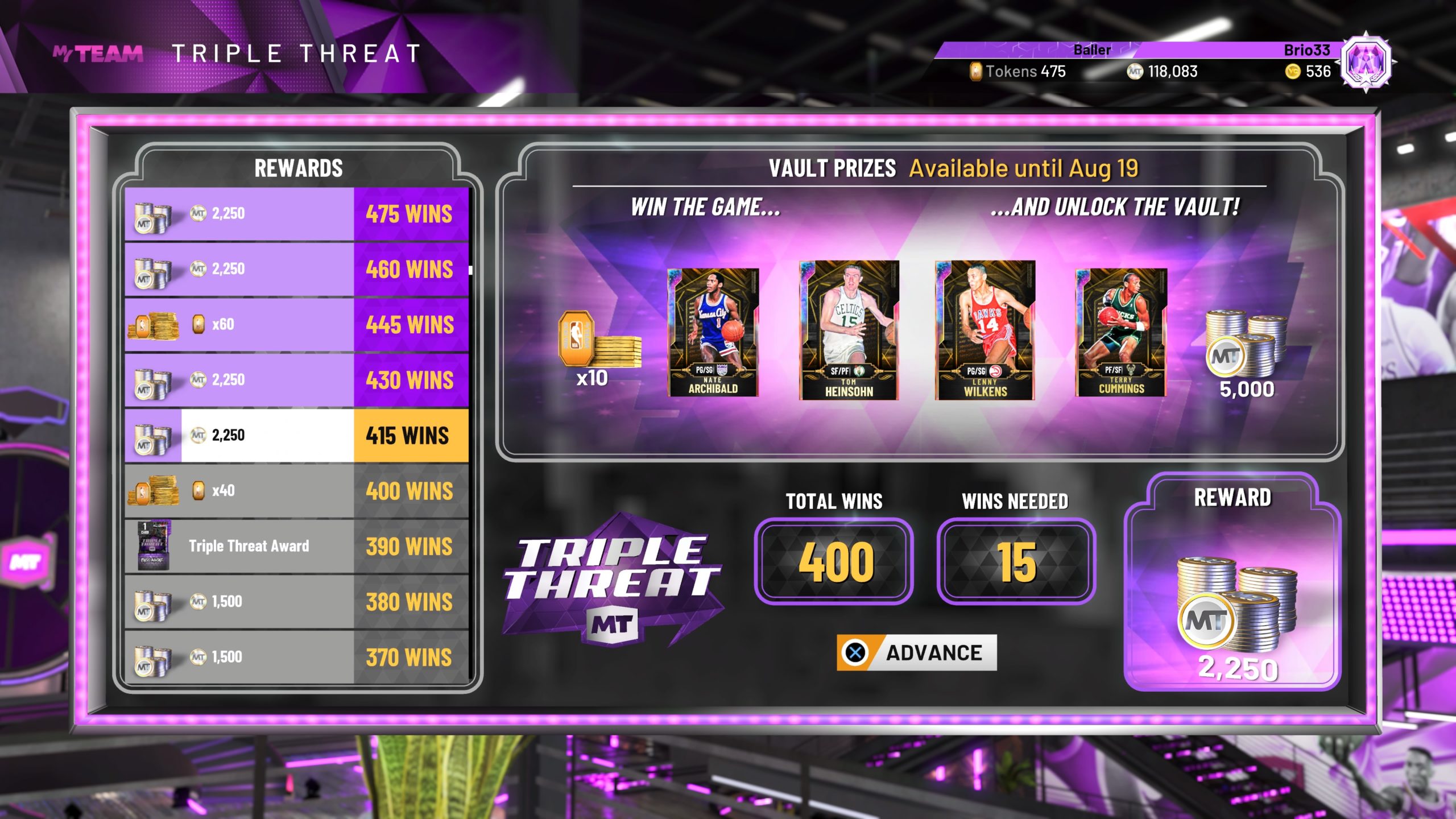 Rewards are obviously becoming a theme here, and will continue to be one throughout my subsequent wishlist pieces. The only question is, will I get all of my wishlists out before we get any concrete news on NBA 2K21?

I sincerely hope not.