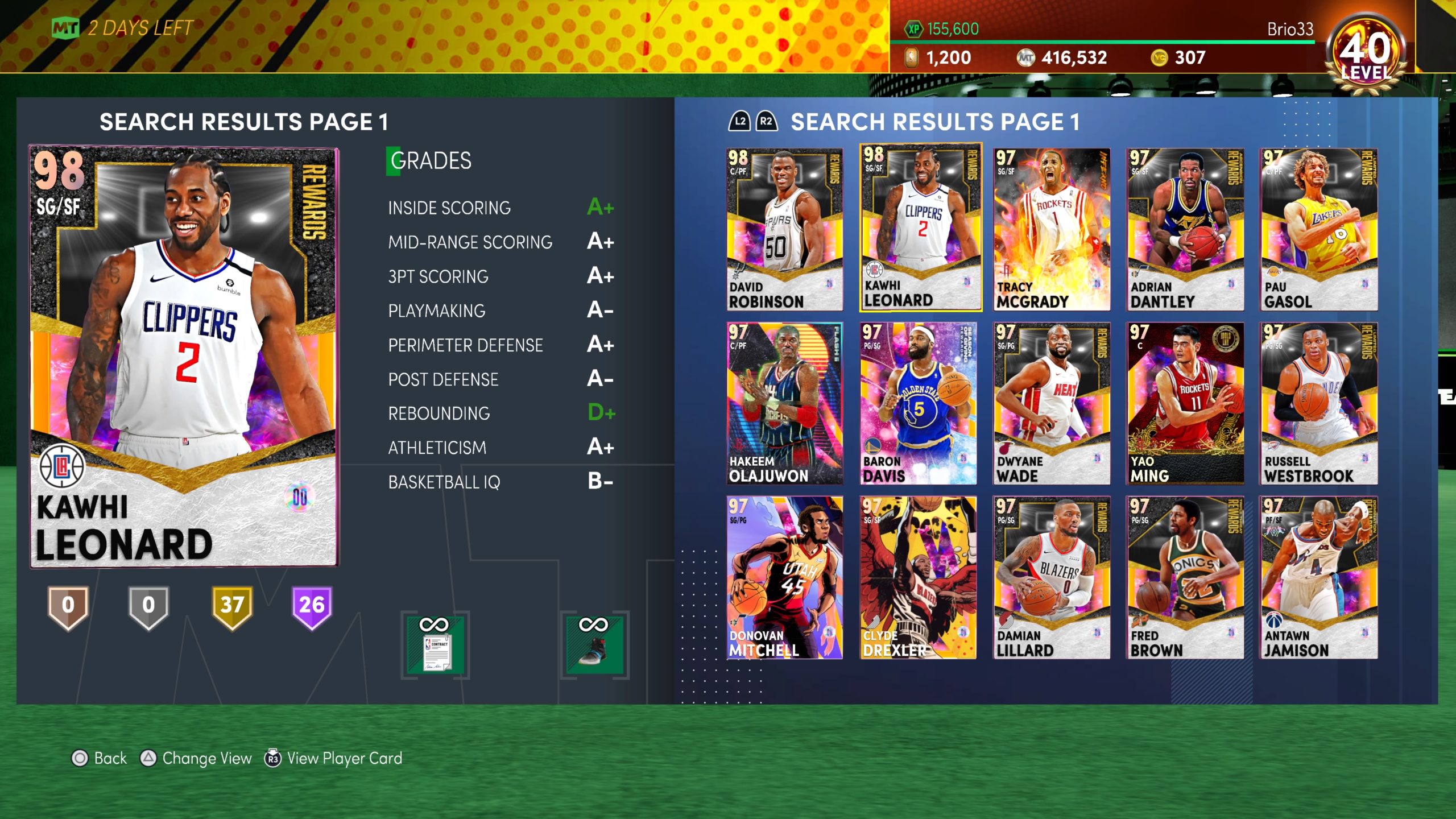 Seasons 4 and 5 were a lot of fun, but they were also just a lot. Some of it was worth the grind (Kawhi and D-Rob, or the Age of Heroes freebie cards), while some wasn’t (sorry Russ), but as the saying goes — it’s all about the journey, not the destination.

Okay, that’s not entirely true. When it comes to sports, it’s essentially all about the destination, as long as that destination results in a win. So I’ll start with the dubs: 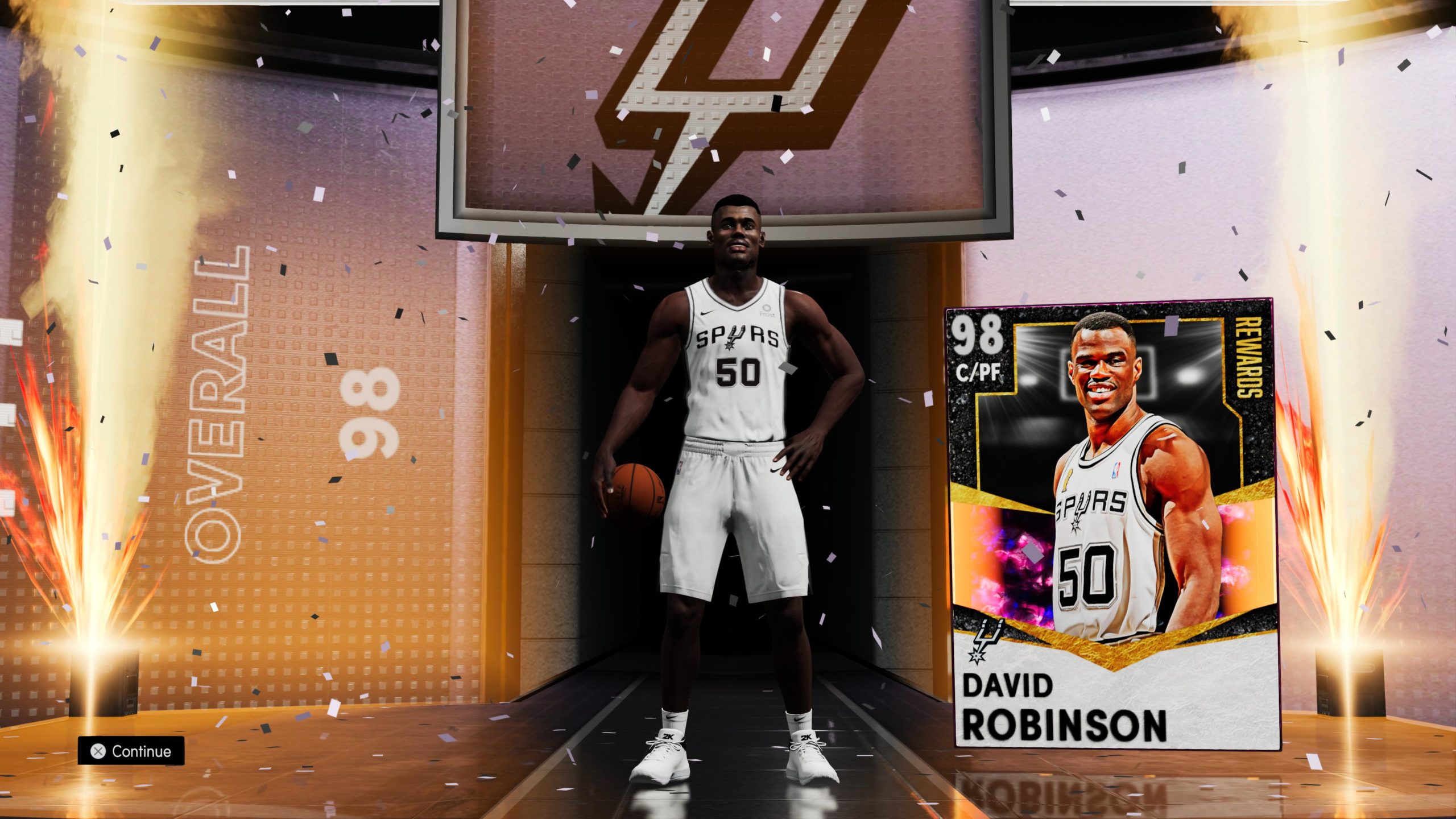 I’ve said it every season, but XP really is quite the ingenious addition from 2K this year. I told myself that I would take my time on the journey to Season 4’s galaxy opal Kawhi and try to be even more efficient than Season 3. For the most part, I accomplished that, but unfortunately there were far too many occasions where I talked myself into buying VC for packs because I really wanted the players, or I really wanted them now, or because I needed them for XP.

Obviously, I didn’t need them for the XP because by the end of the season there’s so much XP that I think it’s actually easier to get the big reward cards than people realize. Yes, it’s easy to level up at first, but once you get past level 30 and the XP amounts start to look daunting, that extra justification to spend VC is dangerous. This is by design of course, but it’s up to me/us to be disciplined and patient. There’s huge XP drops at the end of the season, and things just seem to fall into place without much of a fuss.

David Robinson actually was a breeze in a shortened Season 5, so if that’s the way 2K is going to go from here on out, I’m all for it. 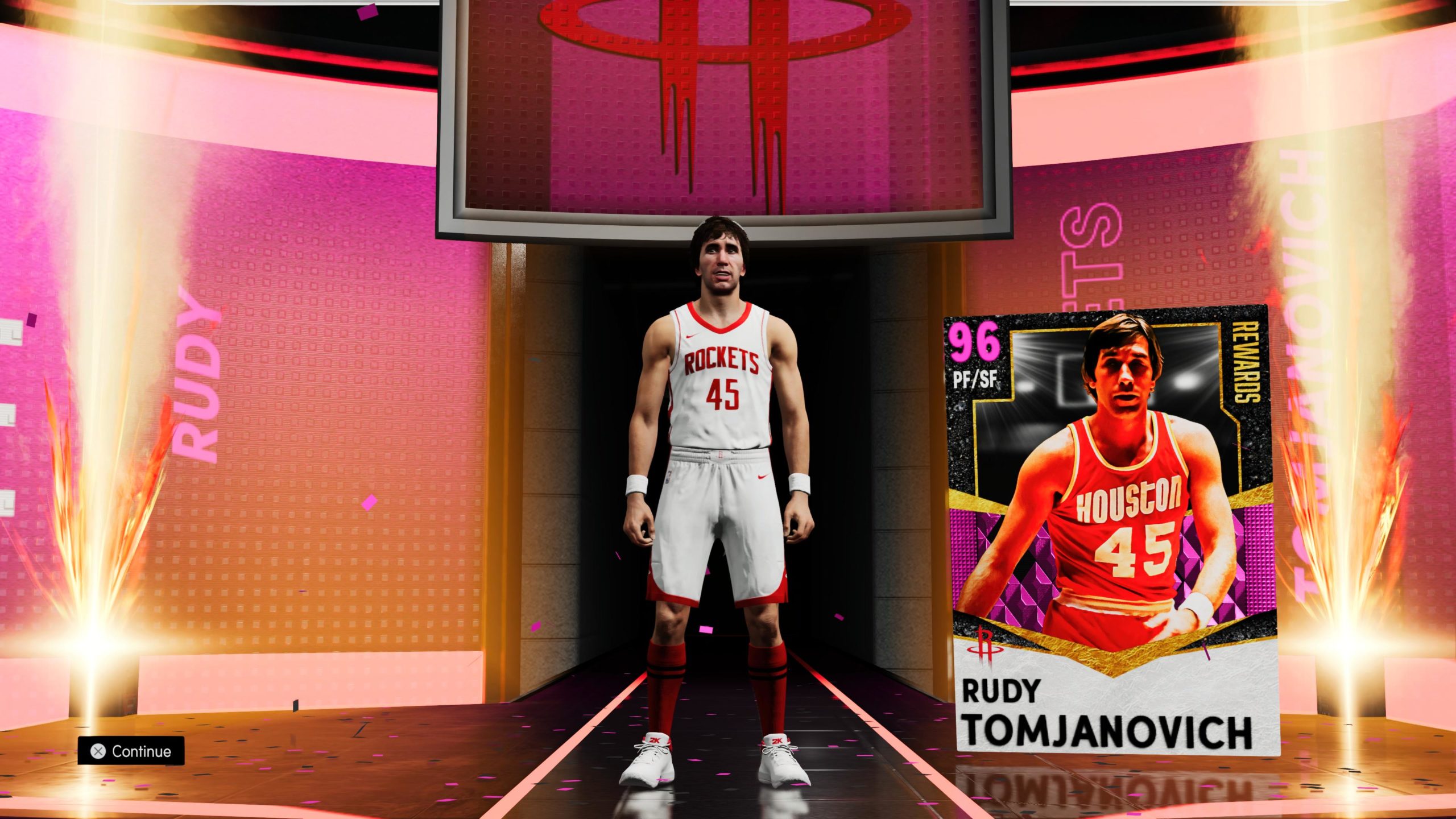 Unfortunately enough for me, the promo cards in Season 4 and 5 were all too tempting, so my discipline was tested and broken.

I’m probably one of a small, insane, group of people who locked in for Rudy Tomjanovich in Season 4 (that weren’t interested in getting Klay, that is). I’ve always loved Rudy T cards in MyTeam, and am actually quite shocked about the love he’s received. Making him a Reward lock-in sucked, but at least some of the cards required were Texas-team favorites like Manu, Shawn Bradley and of course, Steve Francis.

Steve’s amethyst card had been a mainstay in any online lineup I ran, but now my Rockets squad builder is looking nice. 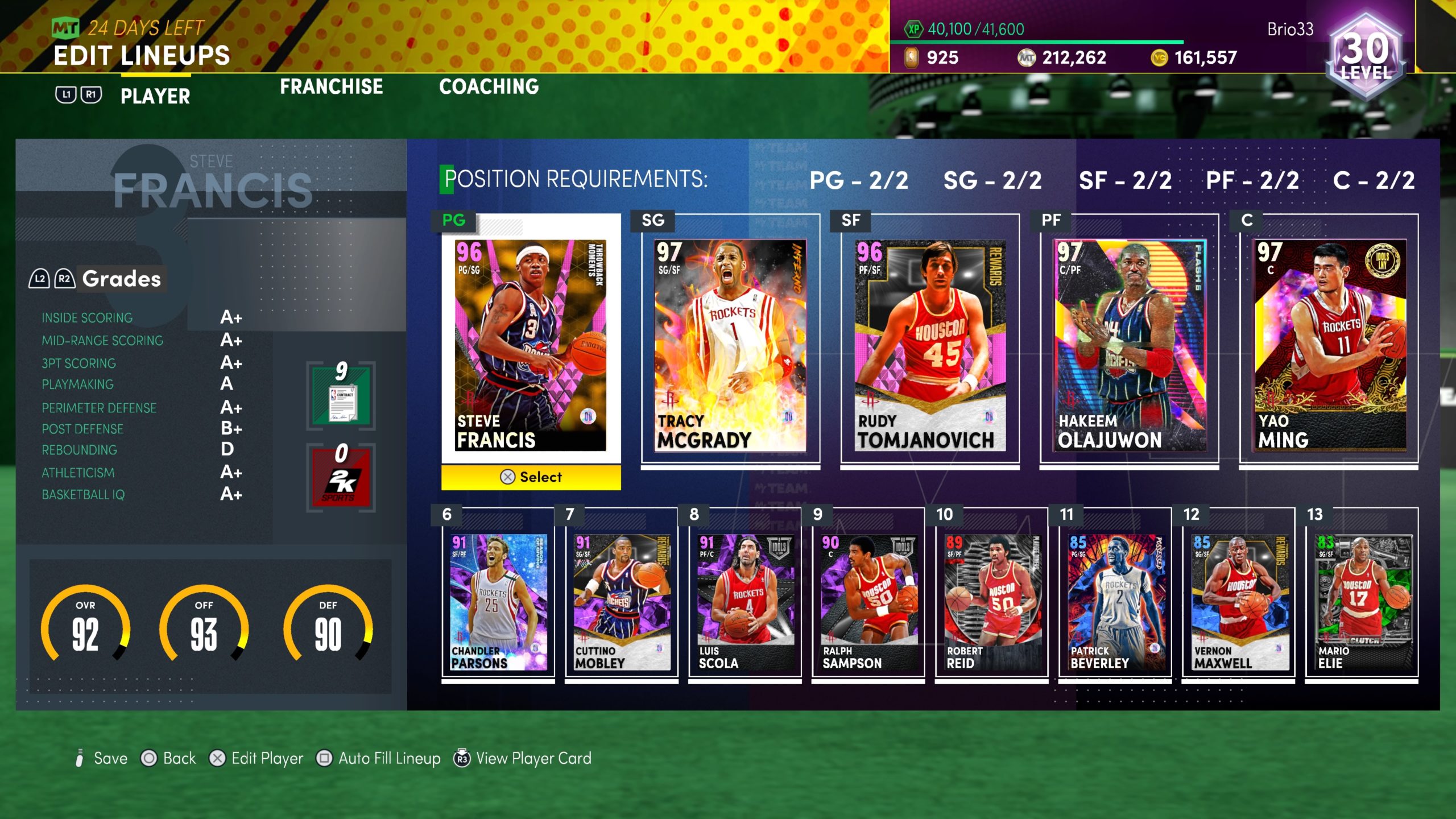 Oh, so you noticed the original owner Tracy McGrady I have in there too? Yeah, like I said, Season 4 broke me. The day that Inferno packs came out, I stupidly decided I was going to buy packs until I pulled a galaxy opal. LeBron would have been fine, but I really wanted T-Mac. Somehow 2K didn’t call my bluff, as I got him in my second 20-pack box, so for less than $100.

Objectively, I know it sounds insane to be pleased that a virtual card who will be obsolete in mere months cost me less than $100. It is insane. And when I actually pulled him, I honestly wasn’t happy — I was just relieved. So the moral of the story is that there’s no need to spend money to win when you can get cards like Kawhi, Jamison, D-Wade, D-Rob, Blake, and The Matrix for free. Those six players are actually an extremely formidable lineup for anyone, not just a No Money Spent player. 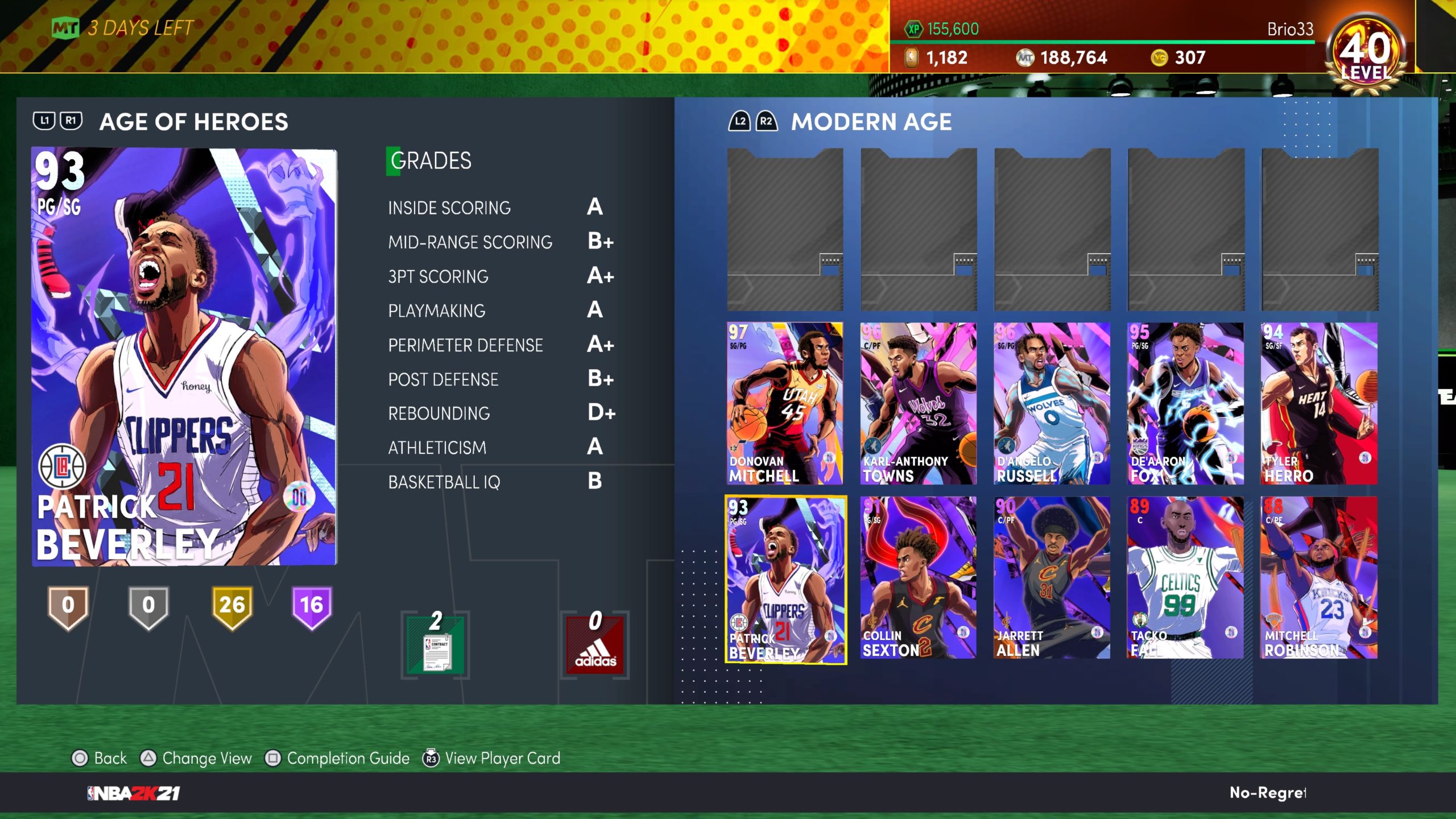 Then with Season 5’s “Age of Heroes,” the amount of free cards we got was a heroic effort on the part of 2K. And the “mini-grinds” to get them weren’t stressful at all, which was a nice change of pace.

For example, just playing a few Unlimited games vs. having to actually win them was a relief. So much so, in fact, that I actually had some fun playing online for a change. I was able to take whatever group I wanted into the Unlimited streets (like my Rockets squad), and if I got destroyed because my Yao was just too slow for online play, it didn’t matter. I still got the XP, and I still got the rewards (my favorite is definitely Clyde the Glide), so I was happy. 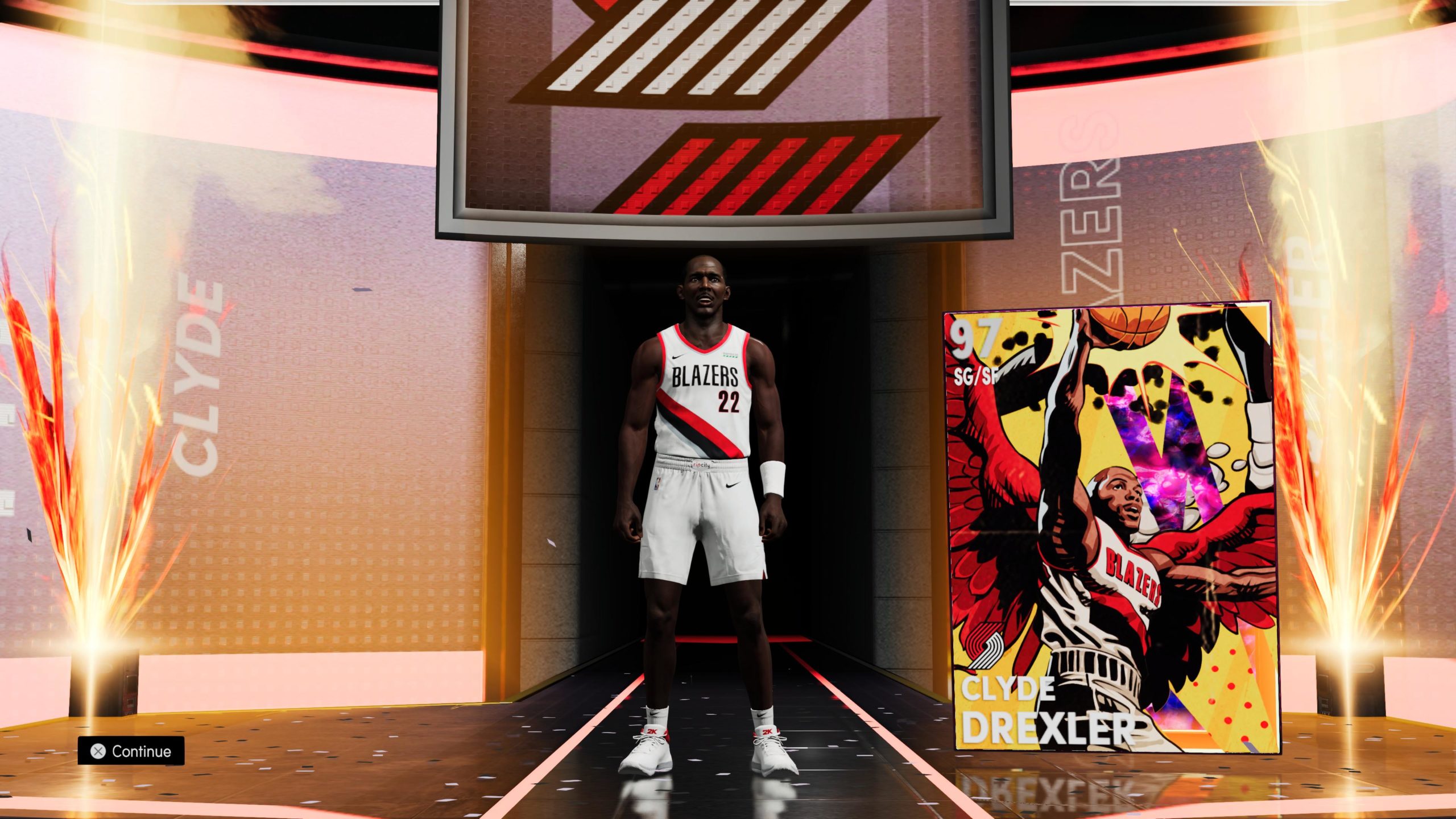 And don’t tell 2K, but having all of those great free cards helped keep my VC spending in check during Season 5.

Well, except for when galaxy opal James Harden came out. I relapsed that weekend, and ended up broke and disappointed. So the terrible pack odds actually did much more to curb my spending going forward than anything else. 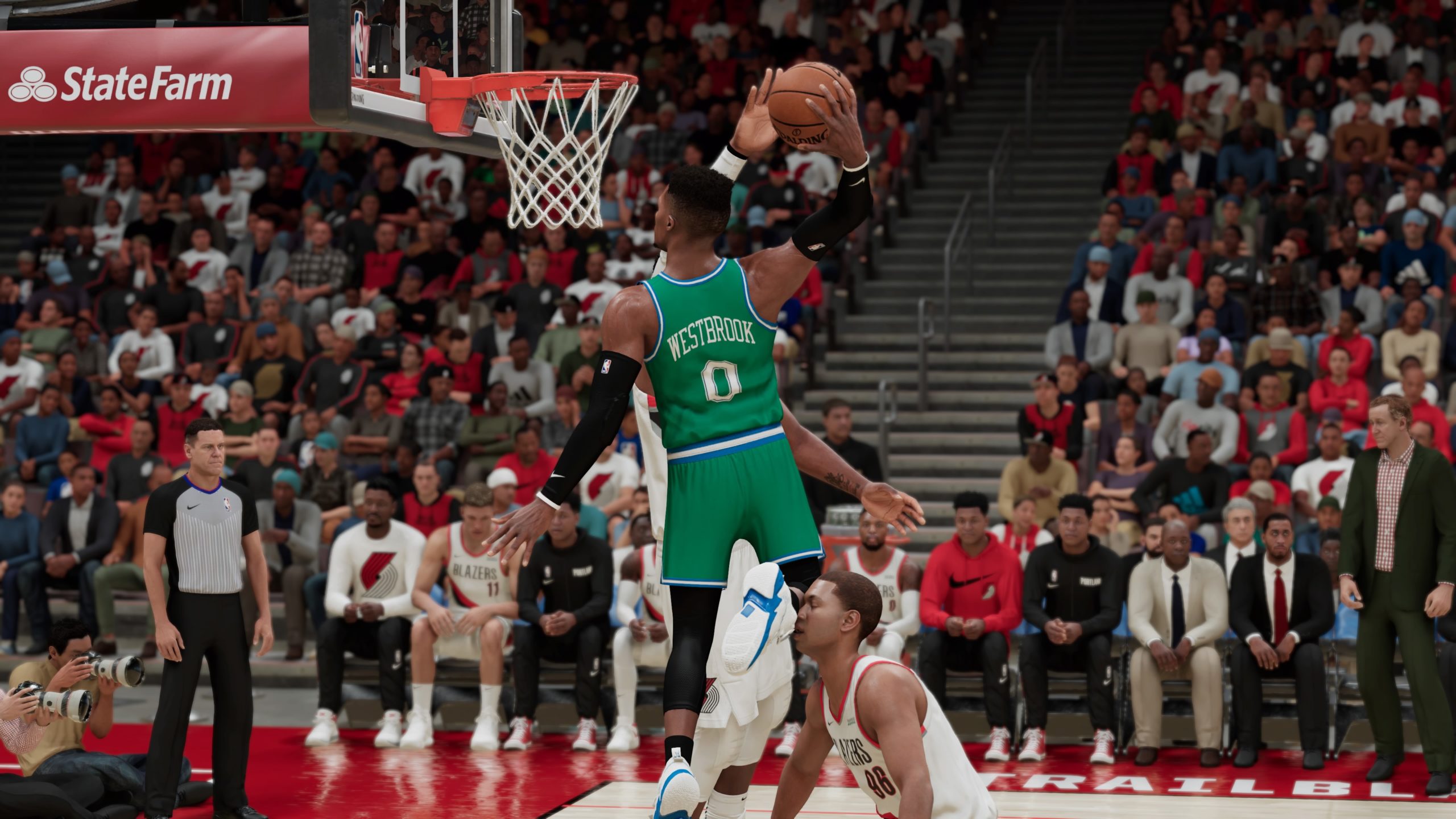 Russ, I love you, but you wouldn’t even make my Free-Card-Only Squad. Even back when Russ dropped, I still preferred D-Wade, and now after the Age of Heroes, I’ve got Donovan Mitchell or D’Angelo Russell as point guard options.

It was, however, very satisfying (and a major personal win) to finally get Russ, who was my first Limited player reward.

In previous seasons, I just didn’t have the time, patience, or luck to grind for a ring each weekend. But in Season 4, it seemed like I was seeing my ring relatively early (like in less than five wins). 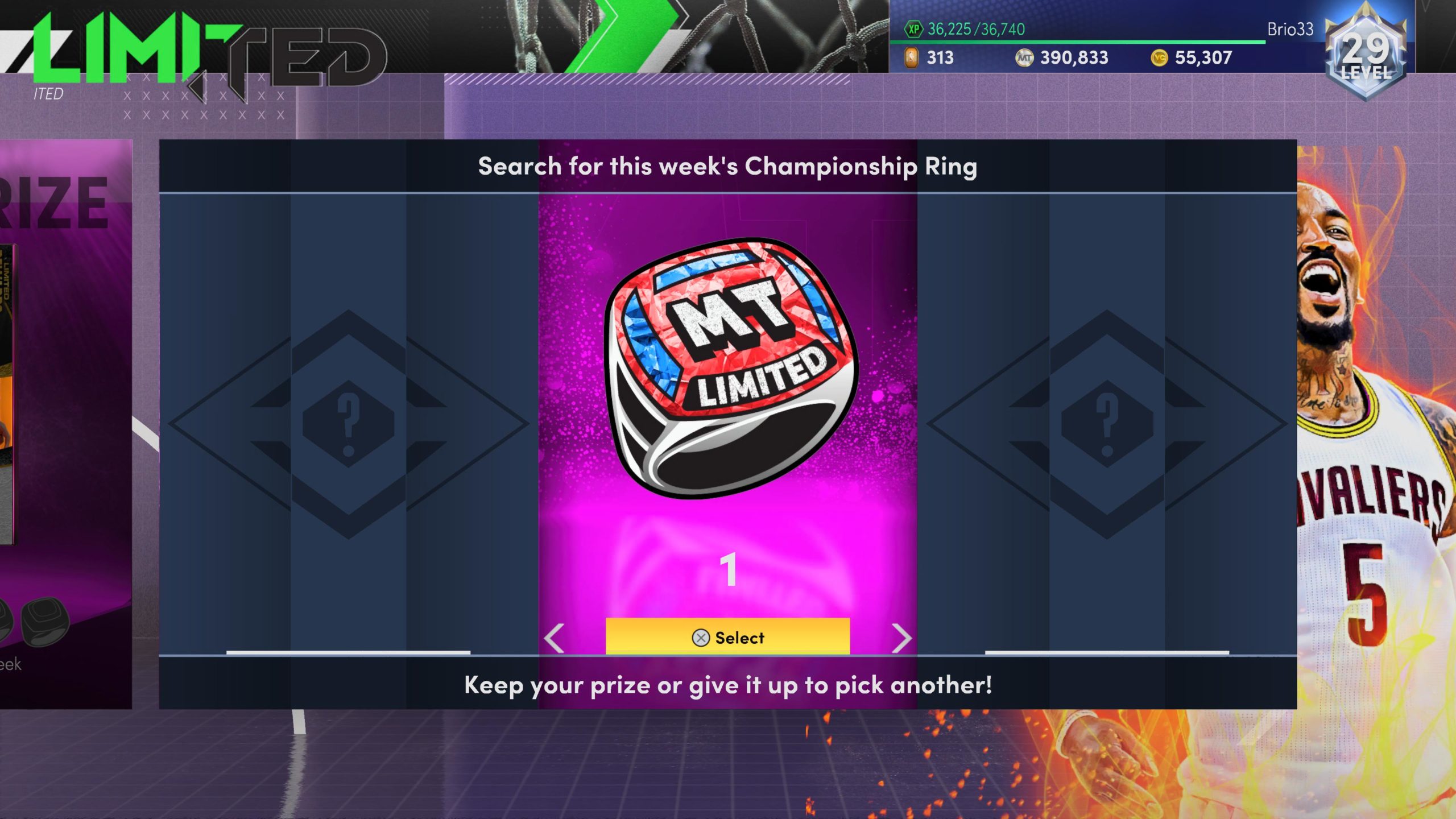 The last ring to actually unlock Russ was right in the middle after my first win of week six, which came before the game even started as my opponent quit (or got kicked probably). Can’t complain about that. And of course, getting a ring usually coincided with knocking out the “Win the Weekend” XP agendas, which was also a nice win-win. 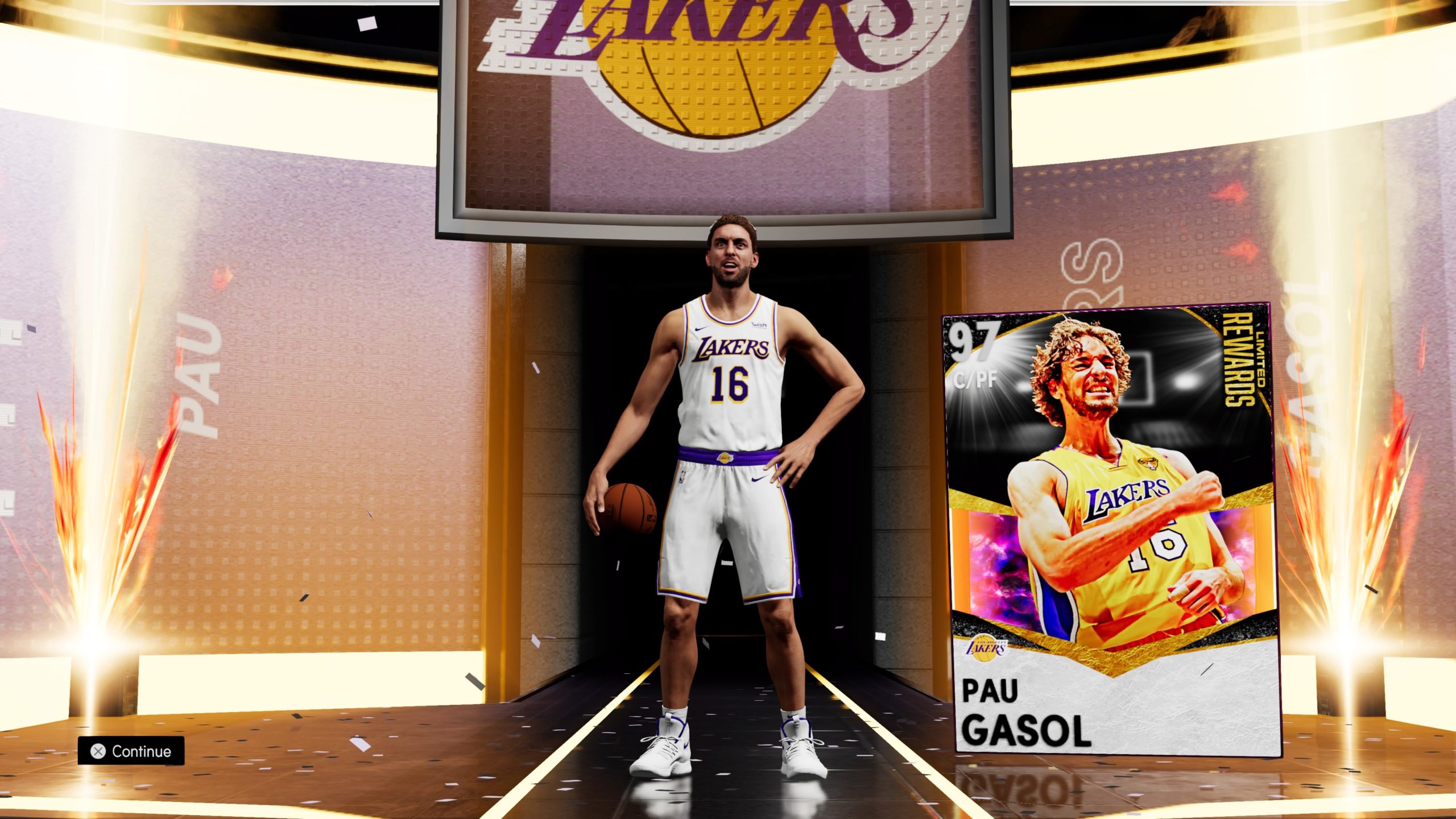 Then with Pau, having to grind for only five weeks instead of six was a welcomed change. I did find it strange to have two center reward cards in Season 5 (D-Rob and Pau), but I happily went after and got both of them.

However, I do think overall that the power creep has started to negatively affect Limited squad building options. It’s obvious that pack-buying players have an advantage over NMS players, particularly when matchmaking still needs some work. In the future, I hope 2K continues to keep Limited in check. Running with one or two nice cards is fine, especially now that even 100 percent NMS players have free opals at their disposal, but that one Limited weekend where I was (surprisingly often) playing against three Dark Matter cards was tough. 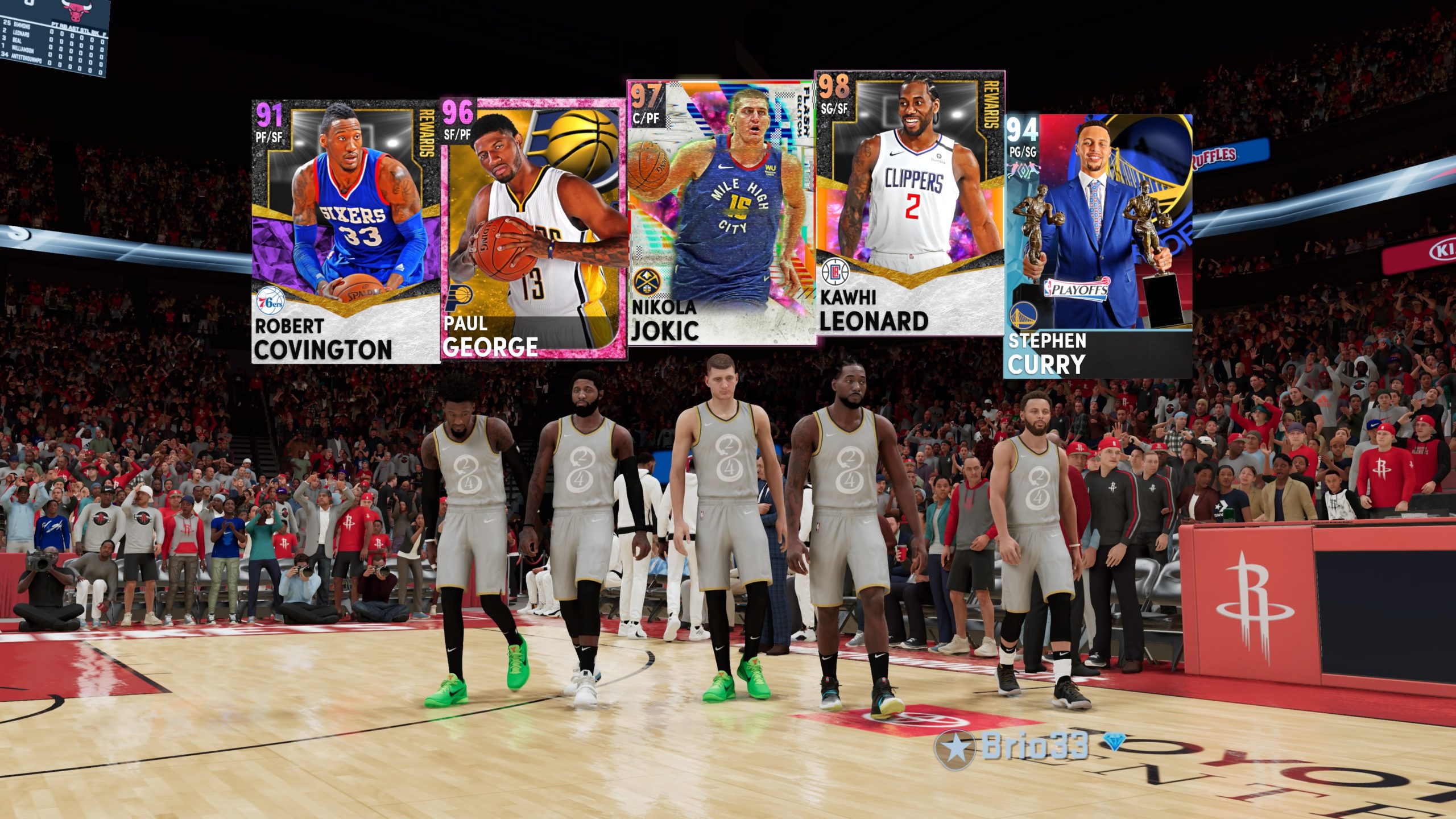 I ended up investing in a galaxy opal Jokic to keep up, and definitely had some success with him. I typically love a good point-center, and he’s probably the best there is. Luckily, I was able to sell him back a couple of weeks later and just about broke even.

But older, lower-tier cards still need love (and a reason to exist) too. So I’ll take this opportunity to shout out some Limited all-stars, like emerald Quinn Cook (plus still-emerald-GOAT Jeff Green), sapphires Jabari Parker and Ronnie Brewer, rubies Markelle Fultz, Kevin Porter Jr., and Kyle Anderson, and of course I can’t forget amethyst beast Austin Croshere — just to name a few.

Ah yes, I’m saving the biggest W for last. Domination is great, but Spotlight Sims are finally back. 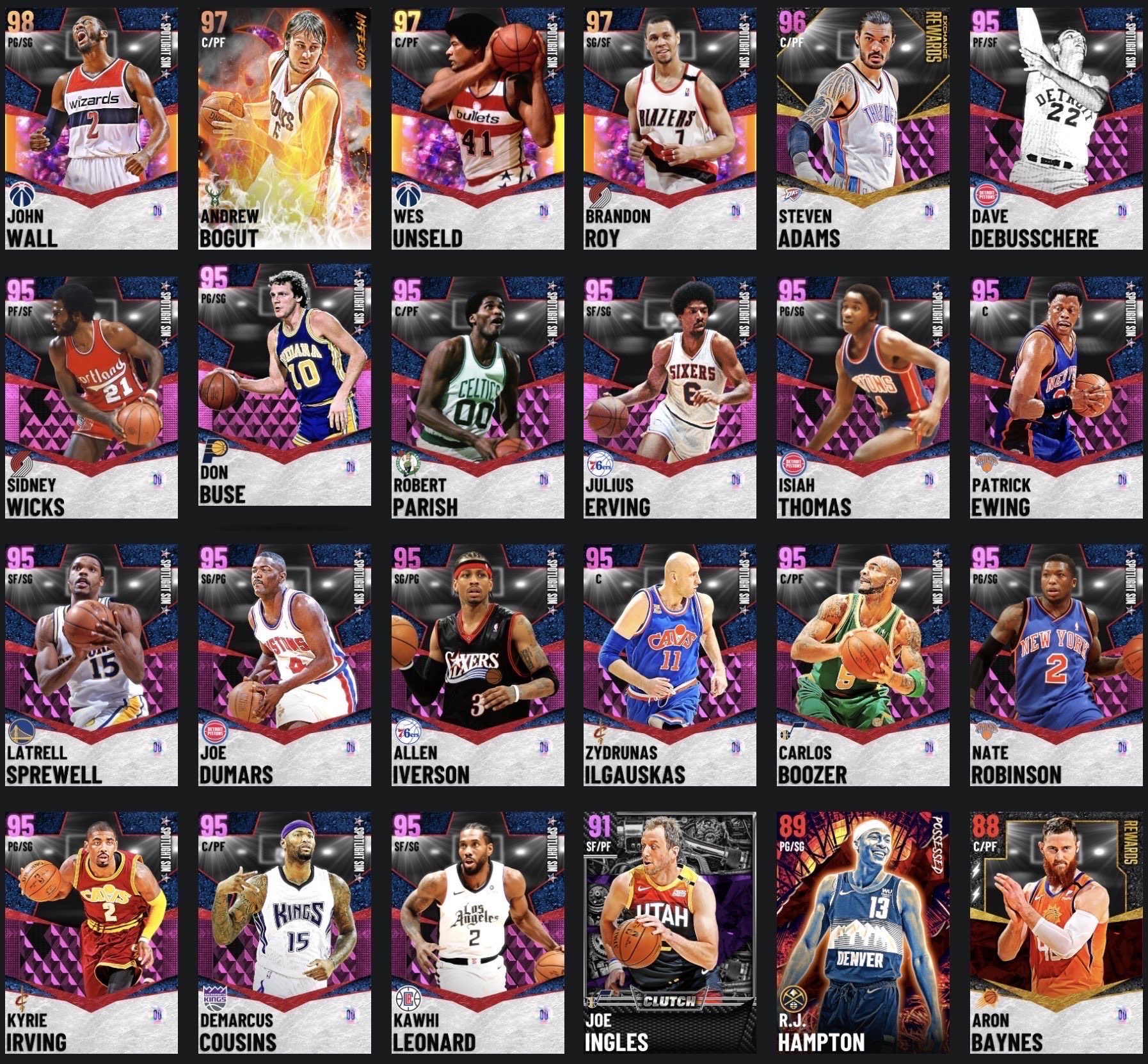 Not only do I get to use older cards I haven’t touched in many moons because of the team requirements, but the reward cards are also (mostly) amazing. I haven’t unlocked John Wall quite yet, and am very excited to eventually do so, but getting someone like Sidney Wicks or Don Buse for free in just a few games is awesome.

I do wish some cards, like pink diamond Kawhi or Kyrie, were replaced with more imaginative players from their respective franchises. Another fun Clippers player, for example, could have been pink diamond Eric Gordon. Or instead of Kyrie, how about a Matthew Dellavedova maybe?

Not every team can win a championship, and not every aspect of NBA 2K21 MyTeam is worth the time or energy. I’ll try to move through these quickly, just because I don’t want to be sad any longer than I have to be. 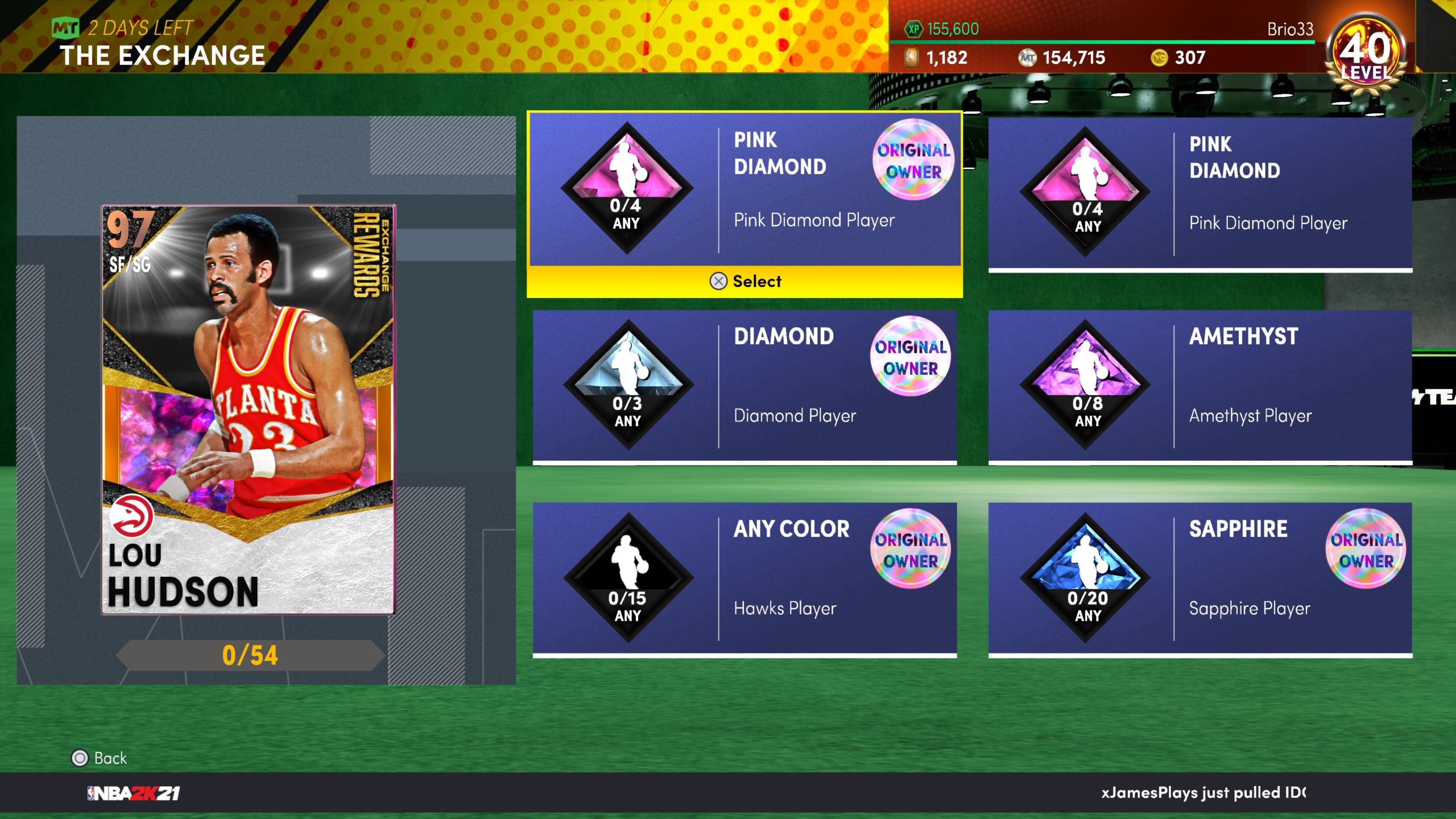 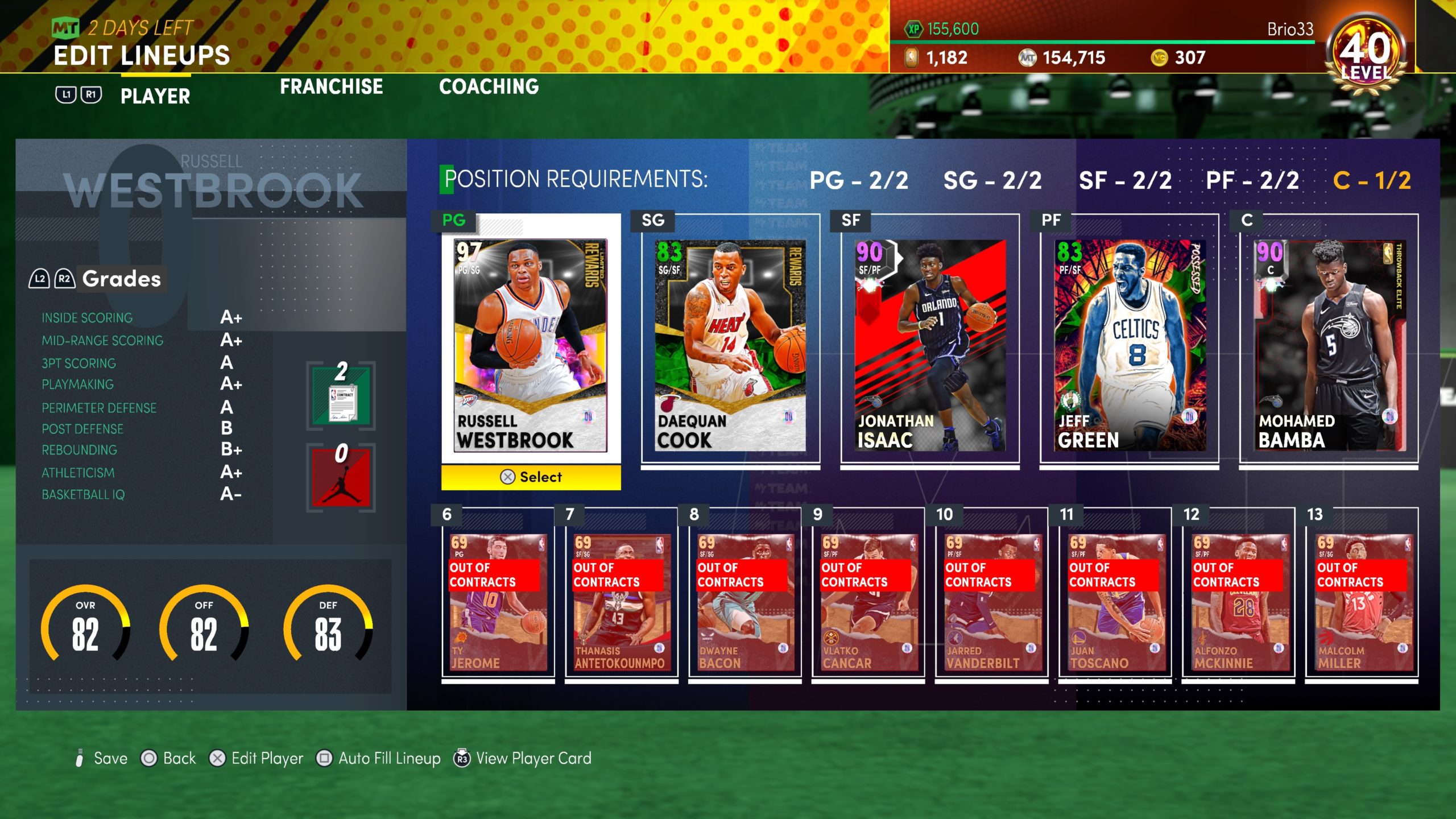 Overall, while I’m really happy with the amount of different things I can do/play in MyTeam, some of the those features/modes need fine tuning. That being said, this still is my favorite year of MyTeam ever, and I’m playing more than I ever have before to try and keep up with all the content. I love collecting cards, especially if they’re free, and 2K has definitely kept me busy these last couple of months.

Another thing to note, particularly for newer MyTeam players, is that typically this time of year is where things get crazy. Overpowered and unrealistic cards are coming in full force to throw off the competitive balance and upend the market for auction-worthy cards. So, as I’ve started doing at the end of each season, I’m selling all of my (non-Rockets) cards to have some MT flexibility. I look forward to diving headfirst into wherever 2K and the all-mighty power creep might take us.

Last year, arguably the best card was G.O.A.T. Yao, so maybe this year we’ll see a dark matter G.O.A.T. point guard Yao, or they might do something really crazy like make Spud Webb a 7-foot center with insane dunking ability. I don’t know if I’m down with that kind of a “glitched” card where they change a player’s physical appearance in-game, but with MyTeam, anything is possible and I’ll try my best to be ready.