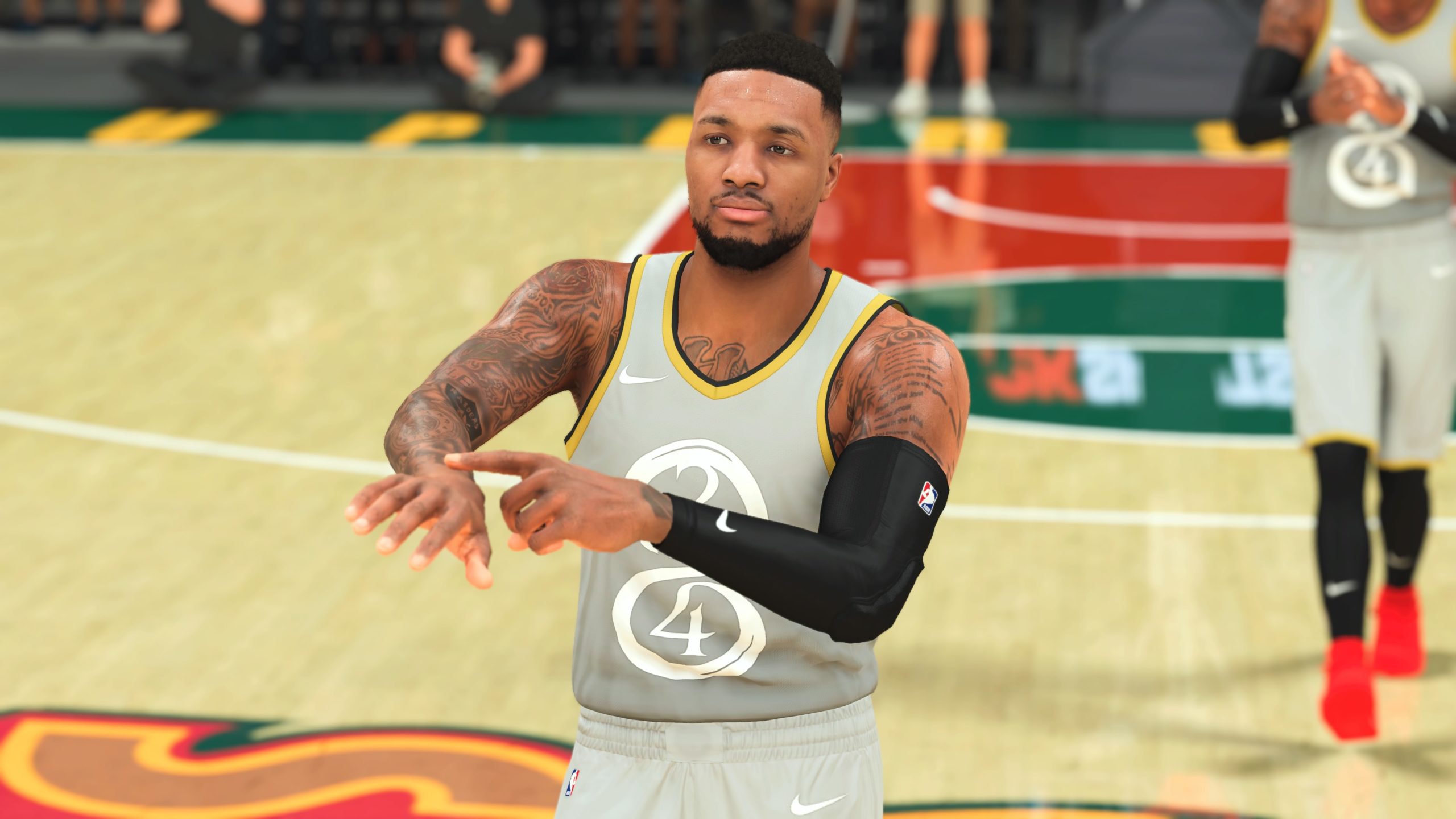 NBA 2K21 MyTeam is a bit overwhelming this year — and this is coming from a seasoned pro. There’s new modes, different gem tier divisions and an entirely new currency (XP) to worry about. But the “too much” from my convoluted title to this article is actually about the frustrations of re-learning how to shoot — probably the most essential skill in a basketball game. That being said, let’s start chatting about things in this early days NBA 2K21 MyTeam review.

Actually wait, let me just quickly discuss the shooting. When I’m talking about struggles early on, I’m not talking about Lillard-like pull-ups from the logo, oh no, at first I couldn’t hit mid-range jumpers with Kristaps Porzingis. And 3-pointers, for a while there I just stopped trying.

That being said, the “hot fix” made things much easier (maybe too easy for some folks), and I also assume once better cards drop — and 2K figures out how to tune the shooting properly — shooting overall will level out. Plus, I know practice makes perfect. So far even just adding a couple of new cheap cards like Richard Hamilton and Robert Horry has helped quite a bit. 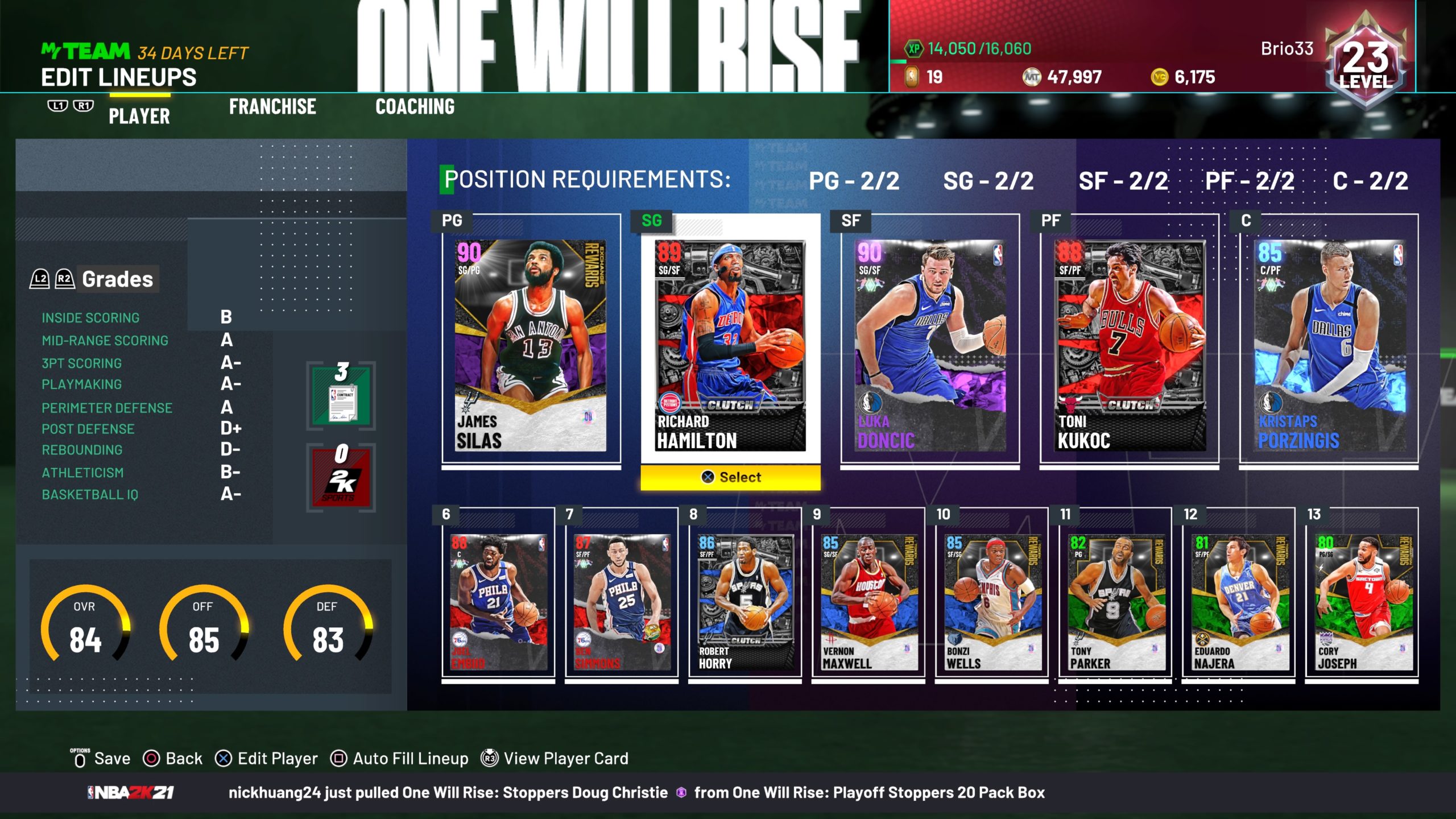 I also made a decision early on to ride with dynamic duo Luka and Kristaps, and have been slowly badging them up. I’ve found that upgrading specific badges (Flexible Release!) has definitely made a difference.

I know I could just turn off shot aiming and use the button, but I want to embrace the stick. When I do hit a green with it, it feels earned and I like that feeling. Unfortunately, that feeling is super rare, and even after the shooting buff I still kind of suck at times. But I’m in it for the long haul.

Okay, let’s not allow my shooting woes to overshadow the interesting and exciting changes to MyTeam this year. Starting with…

Whoops, my bad. This isn’t exciting, quite the opposite actually. Will someone please tell me why I have to win a game on Hall of Fame difficulty, right out of the gate, to earn an emerald card? 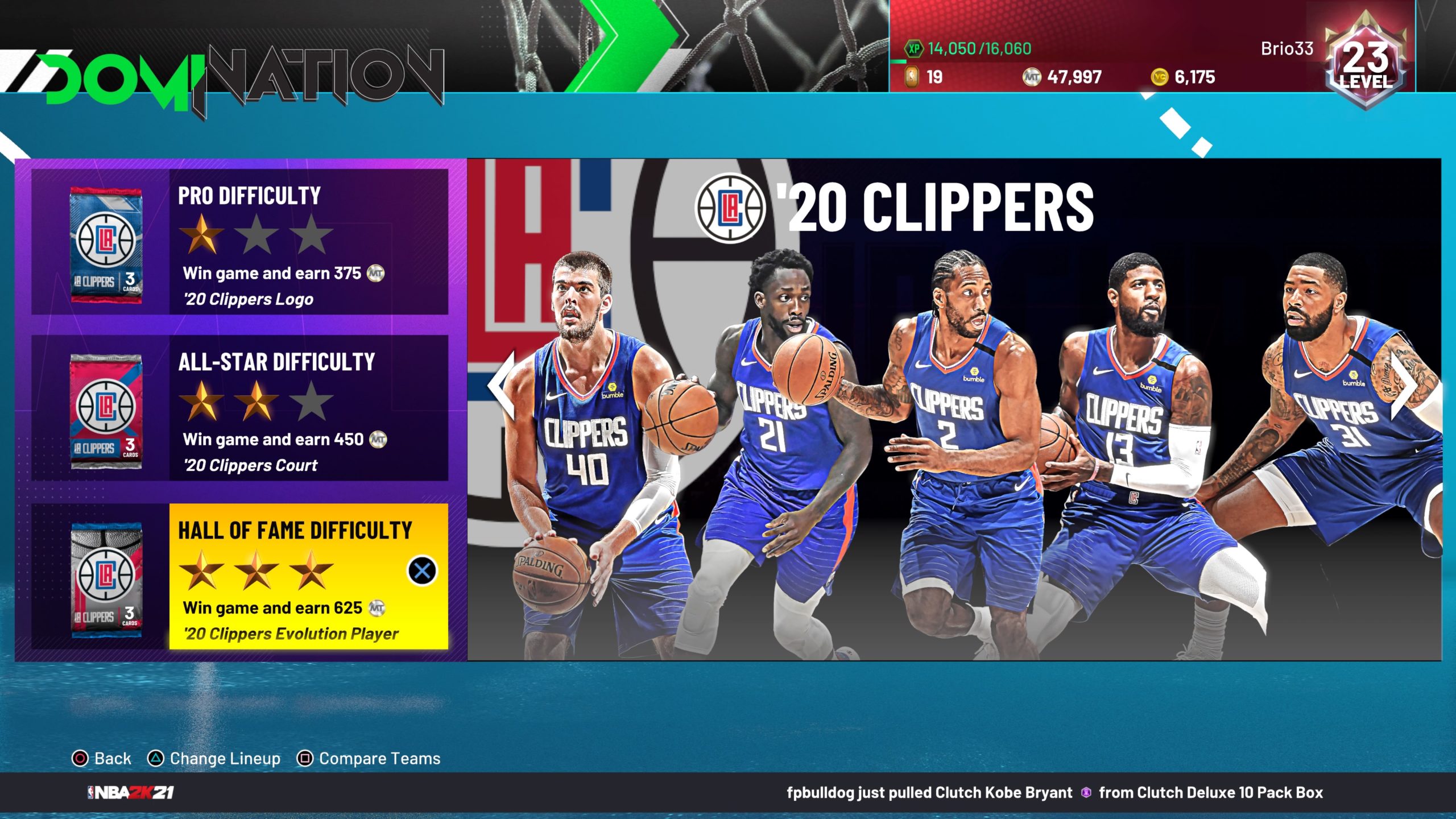 There is absolutely no way I’m going to beat the 2020 Clippers on Hall of Fame right now. The computer hits just about every shot (especially on HOF, but also kind of on every difficulty), and I’m still shooting about 25 percent on anything that’s not a dunk.

There were times during those first couple of days, that I thought I was literally going to lose my mind. Losing some of those games were just so exceptionally frustrating that eventually I had to walk away from the mode. And honestly, why would I play Domination right now?

For the tokens? Nah, I can get those elsewhere. Plus, none of the current token reward cards look very exciting to me. I’ll keep my hopes up that Season Two will bring some better options.

What about for the emerald evolution cards? Hell no. And by the time I’d collect 99 stars, Nick Van Exel will surely be obsolete. (Spoiler alert, he already is.) Blackman and Mikan could be interesting, but probably not worth my well being. Wait, does Mikan have a 3-ball? 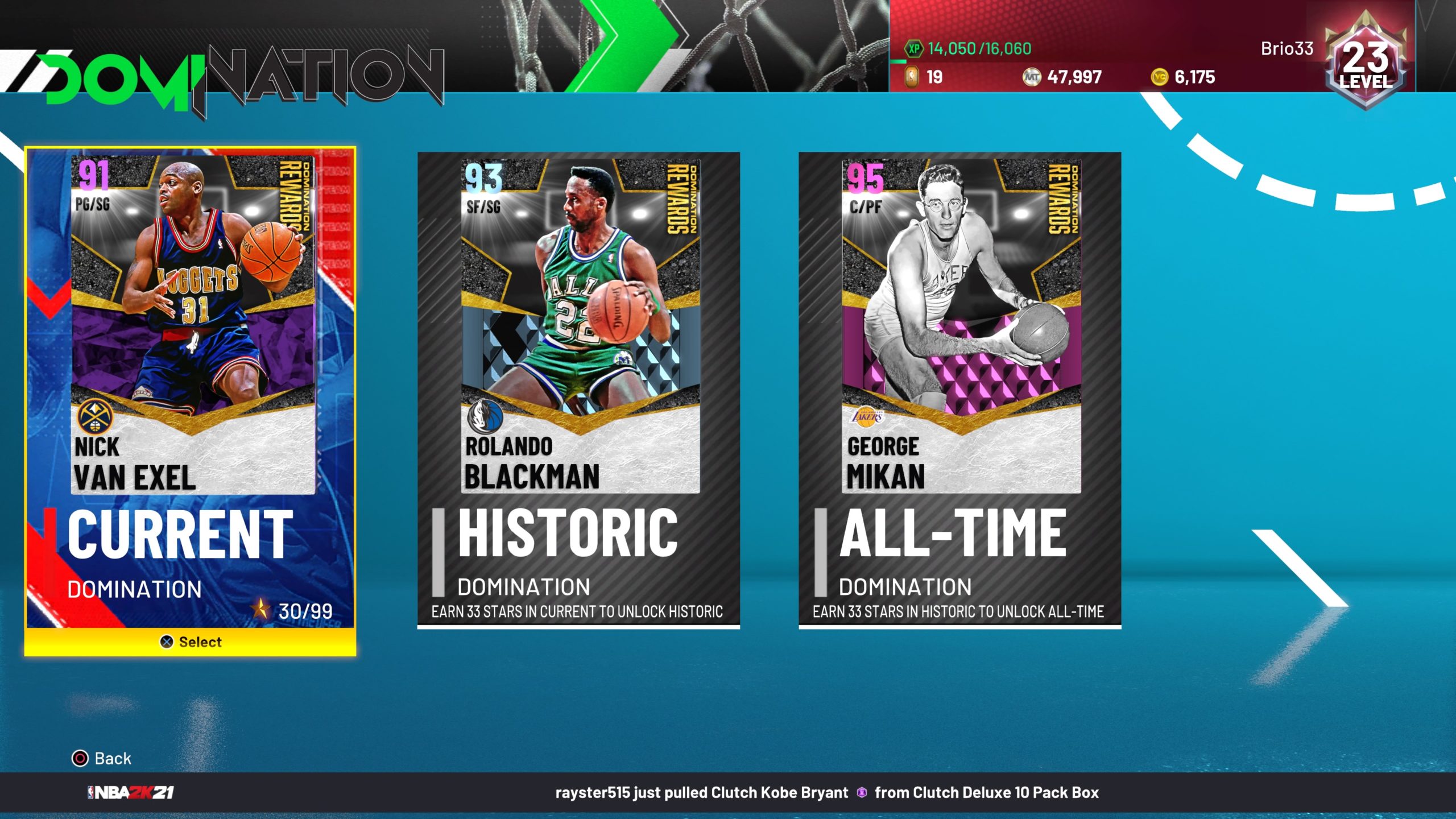 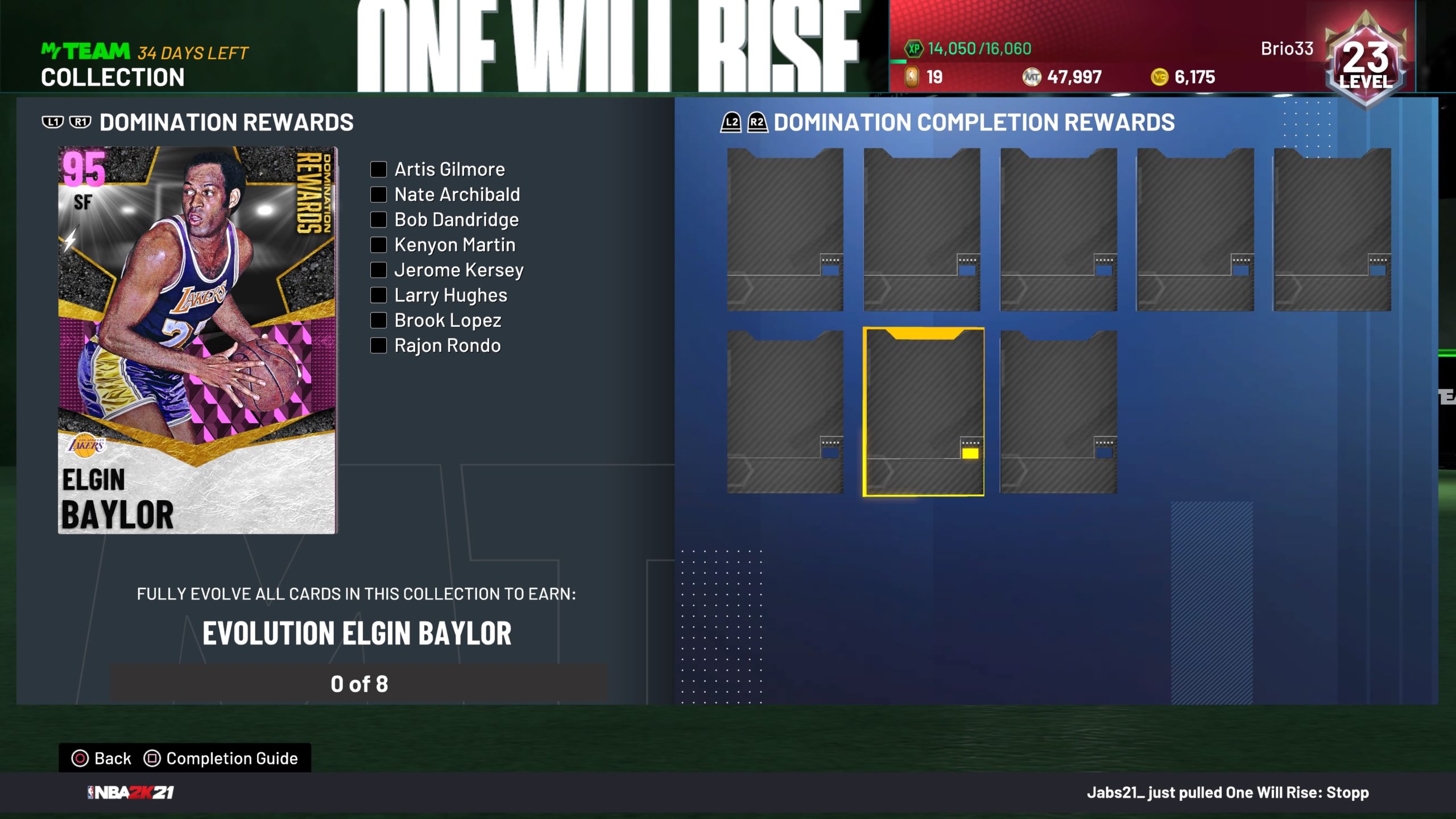 Seriously though, even if I did grind it all out, I most definitely won’t be evolving any of the emeralds just to get ruby Brook Lopez, Rondo, etc. The pink diamond Elgin Baylor does look cool, but again, by the time I evolved him to opal (not even the best tier anymore in case you didn’t know), he’d be another undersized small forward who probably won’t be able to shoot — at a time in the game when there will be more useful amethysts.

Overall, the sweat equity just isn’t worth it to me. And that’s coming from a huge (and now sad) Domination fan.

Now, the wildcard here is what does happen when Season Two begins, in *checks top-left corner of the game menu* 34 days. Will an entirely new Domination start with new rewards, or will this Domination continue, and I won’t be able to unlock the new branches until I complete these? (I certainly hope not.)

Either way, the seasonal way of structuring content is very cool and should (hopefully) keep Domination (plus all the other modes) exciting and fresh. If future rewards do look amazing, I’ll just wait until I have a better squad to try again.

I am excited about Stephon Marbury. I loved watching him play as a kid, and he’s a card I’ve loved using in the past. However, I’m having a tough time winning these games right now. Sometimes even tougher than with Domination. The sadness continues. 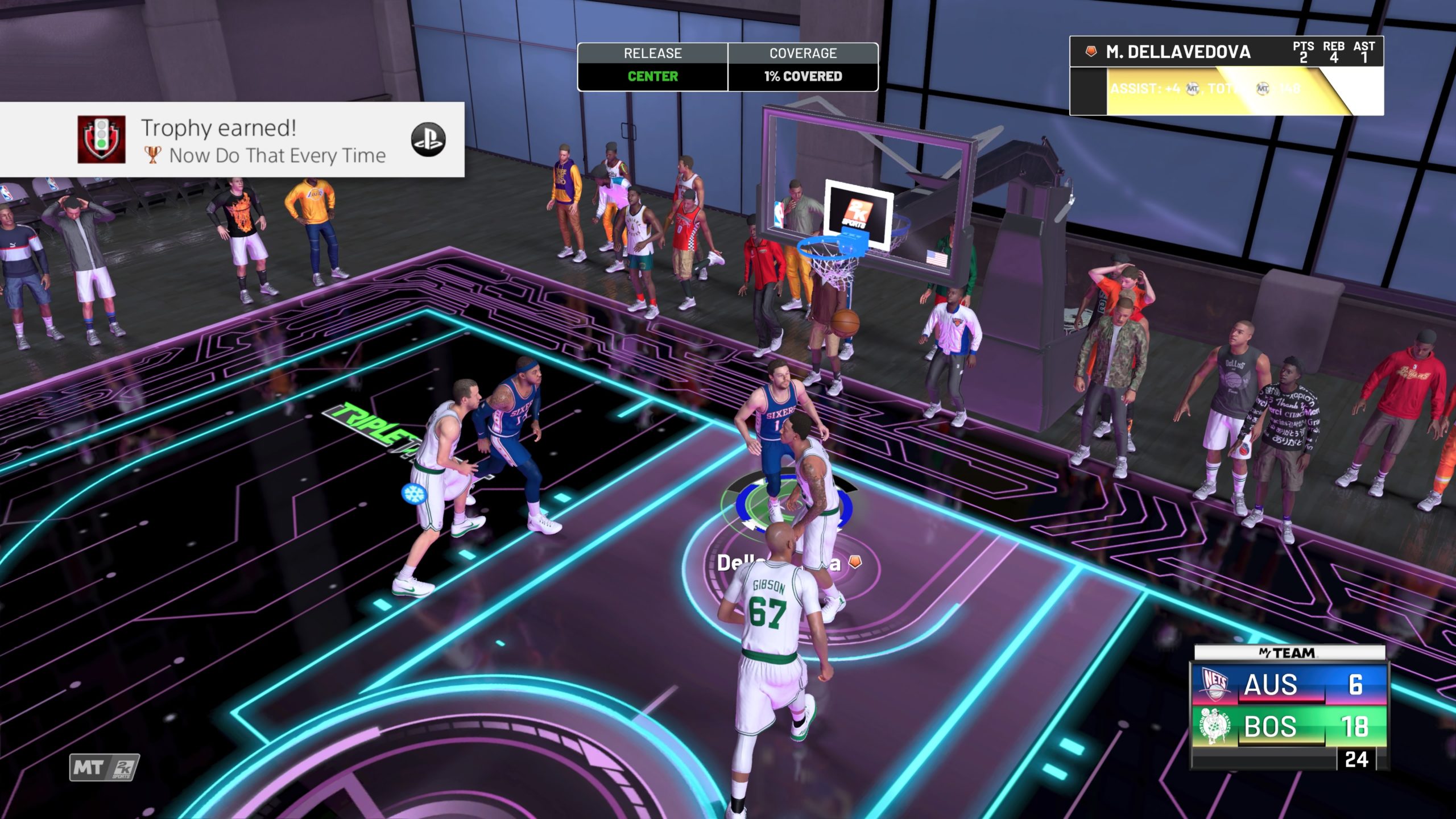 Sure, I can paint-sit if the computer has a center who can’t shoot, or I can just play the cutting game with fast guards until my fingers bleed from pressing triangle, but that’s not very fun.

I traditionally use Triple Threat to try out new cards and just kind of mess around, but I don’t feel like I can safely do that here. If I don’t stick with the players I know and trust (emerald Tony Parker and emerald Meyers Leonard have been good for me), then I’m probably going to lose. Or at the very least, I’ll be sweating my way to a tough win. 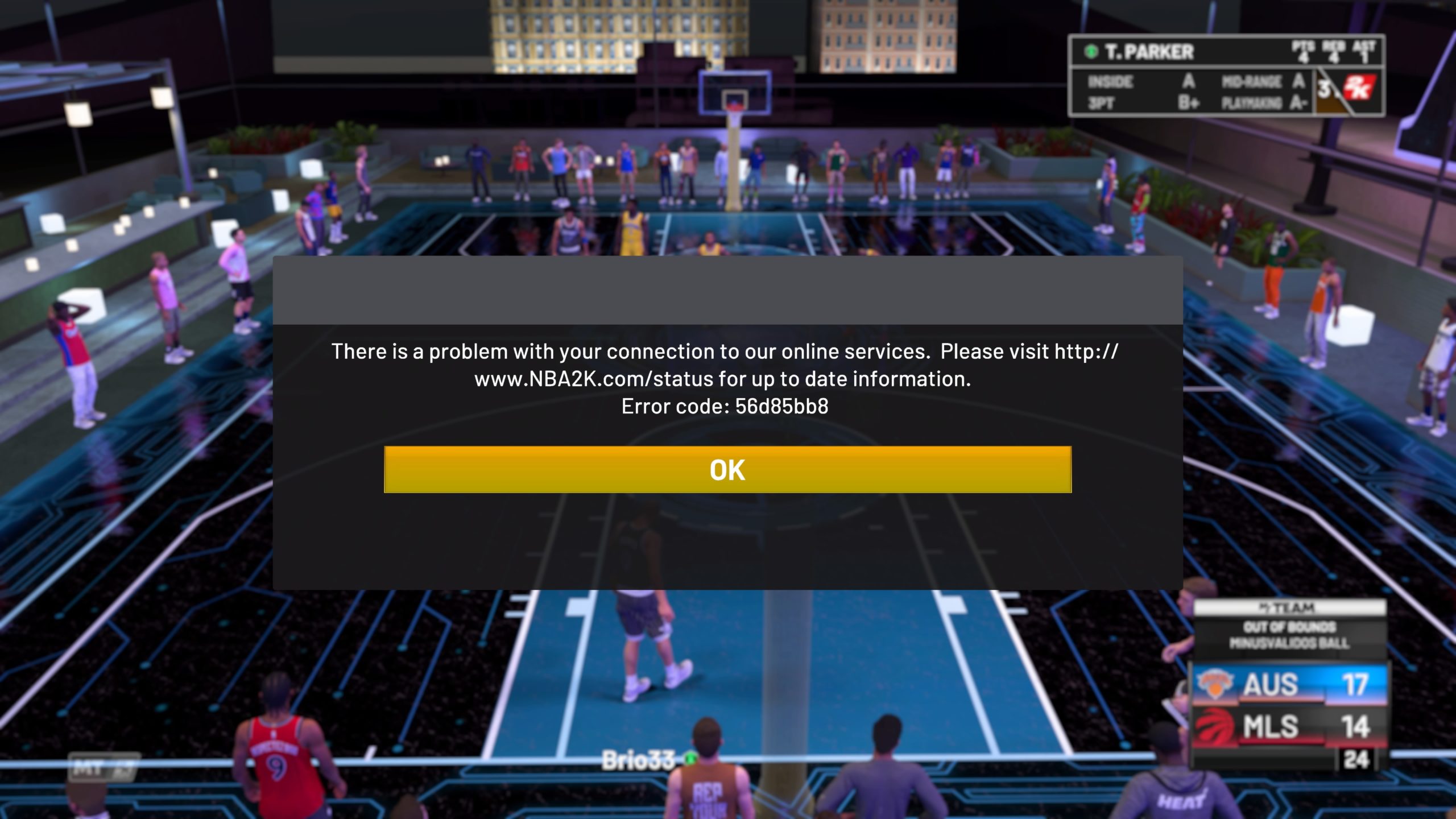 In the above game I was actually winning (after taking a ton of losses), plus I almost had my 9 points with Rick Fox to earn XP, but then the game freaked out and kicked me. Of course, I also got the loss somehow. Unacceptable!

Then during another game, I matched up against Shaq, Boban and Rik Smits.

At first they just backed me down and murdered me, but I started throwing double and triple teams at whoever was trying to post up, and forced enough missed shots to get my transition game going. As you can see below, I only made one three-pointer (all were extremely wide open by the way), but luckily I still was able get enough layups to win. 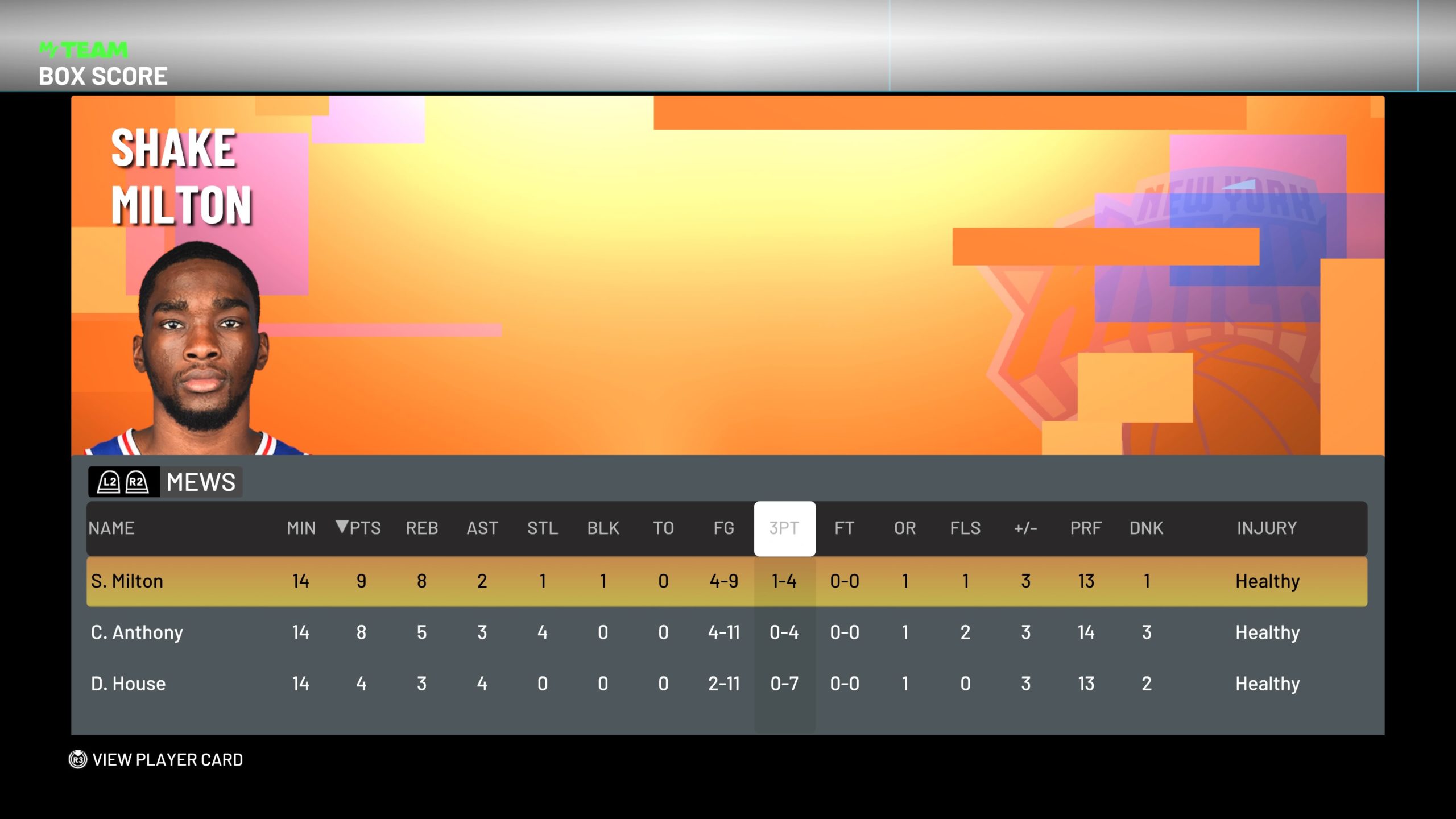 Unfortunately, all of that work I put into learning how to shoot doesn’t apply online. The lag causes the timing of my L2 clicks to be way off, and my shooting is worse than ever. That’s like a learning curve on top of a learning curve. And I know I’m not the only one having problems based on how other people are playing (the paint-sitting plague is terrible).

Plus, again, the rewards in Triple Threat Online don’t seem worth the frustration.

I do like the idea of seeing potential rewards on the main menu though, and wish I could get Terrell Brandon. But as of now, seeing him there on the screen gives me major FOMO instead of the inspiration to push onward. 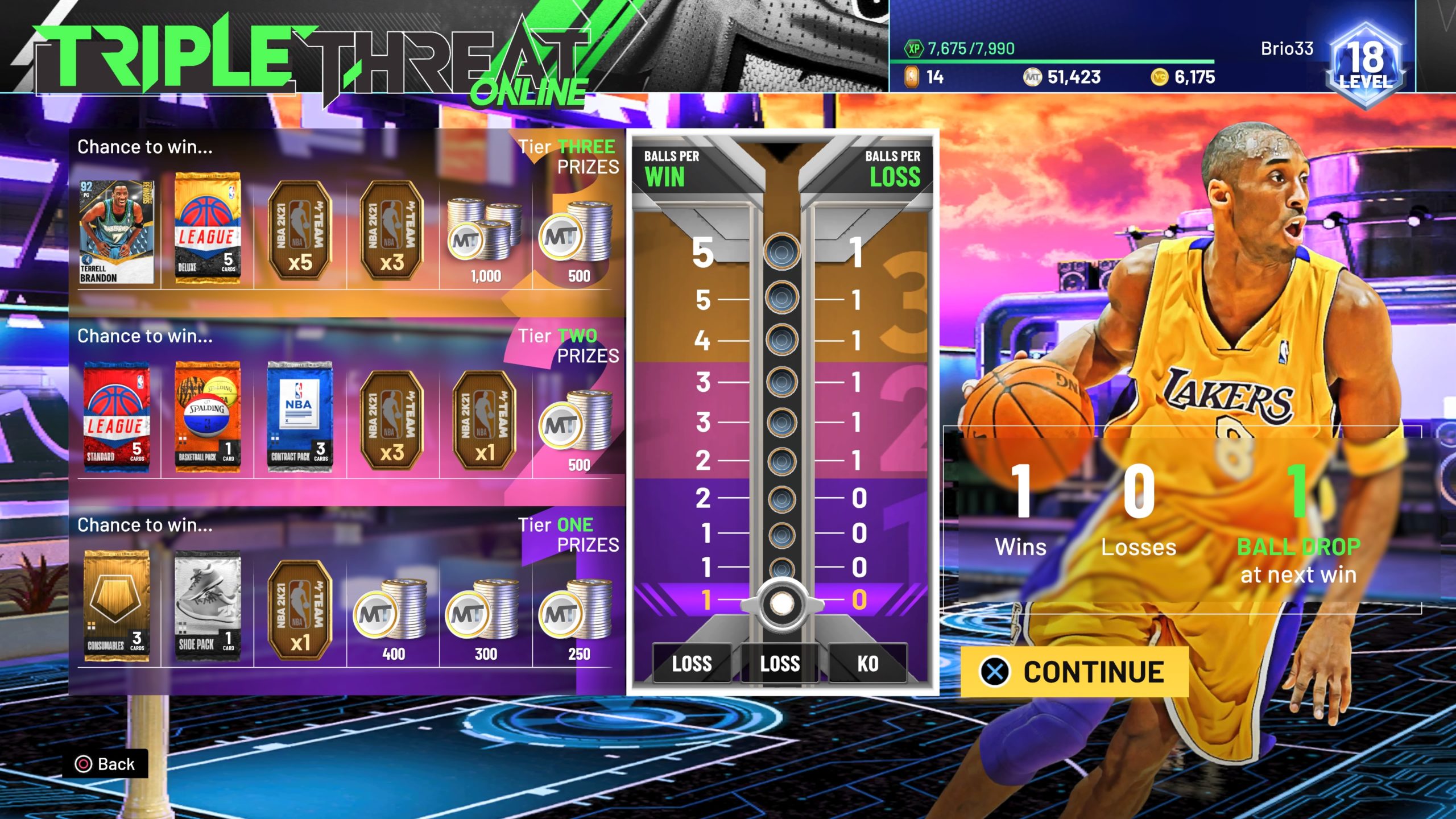 I played one Unlimited game just to get 10 assists with a ’20 Hawks player, and as soon as I got the 10th assist I immediately quit because the lag was so bad. Unlimited has never been my thing anyway, so no big loss for me, but what’s really really sad is that going into 2K21 I thought Limited would be my new best friend. 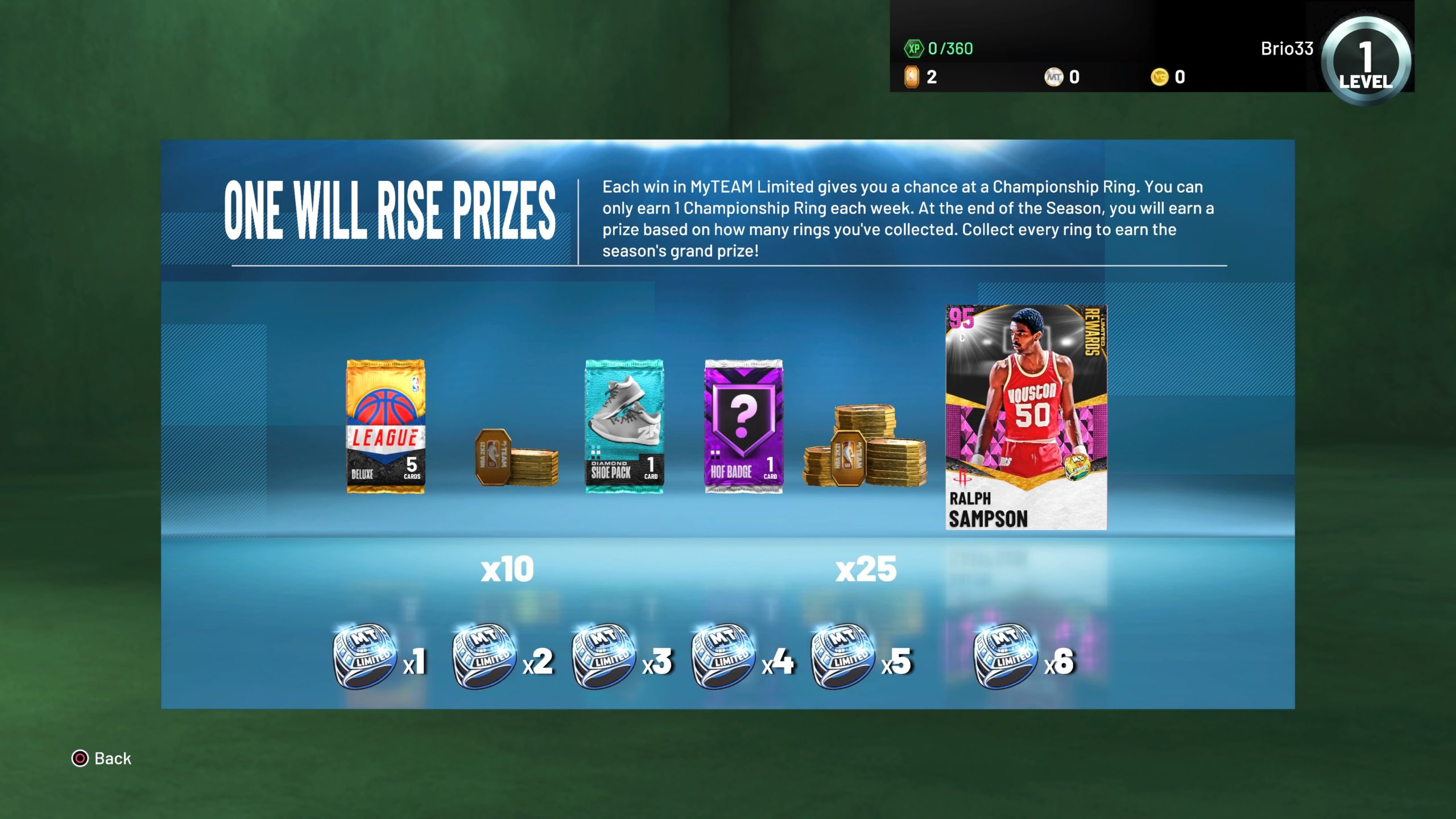 Objectively, the rewards here seem like they might be decent (I really wanted Ralph!), but I don’t know if I’d ever try it again. According to social media/YouTube, people are playing 20-30 games without ever catching a glimpse of a championship ring. That’s awful, and there needs to be a ceiling of games won to earn the ring — for the unlucky among us.

I wouldn’t know, though.

I tried and lost two games where my opponent just sat in the paint and I couldn’t shoot anything, which (broken record here) is not fun basketball. So no thank you, I’m good with my offline modes.

This is actually where I’ll probably spend most of my time in 2K21, assuming they update them regularly and the rewards are okay. 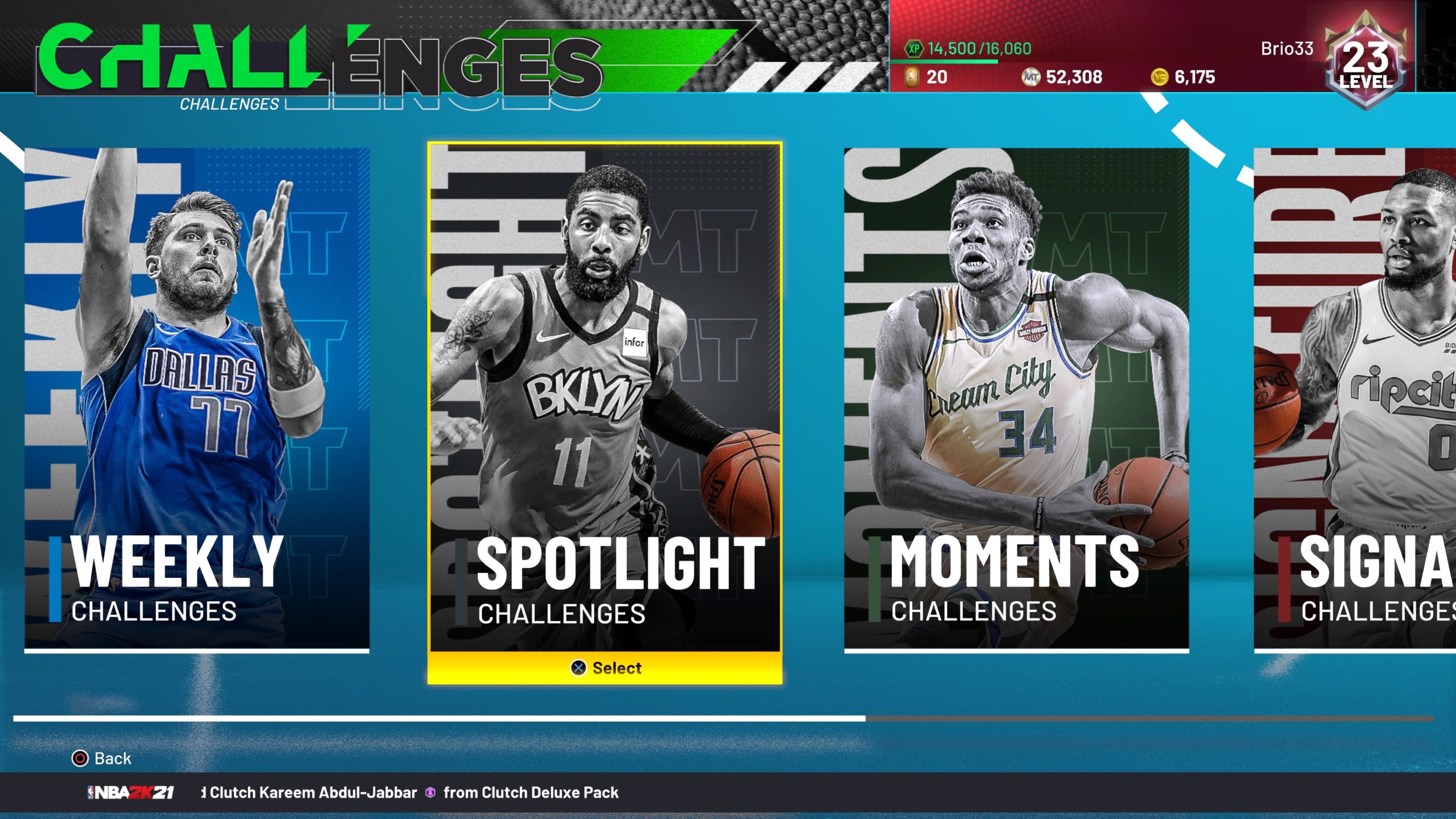 The first challenge I did was the Damian Lillard Signature Challenge. Luckily I had his Free Agent card, otherwise I probably would never have been able to score the 50 points, but I can’t complain (as much) when the rewards are a HOF badge and diamond shoe.

The Spotlight Challenges, however, could be great. 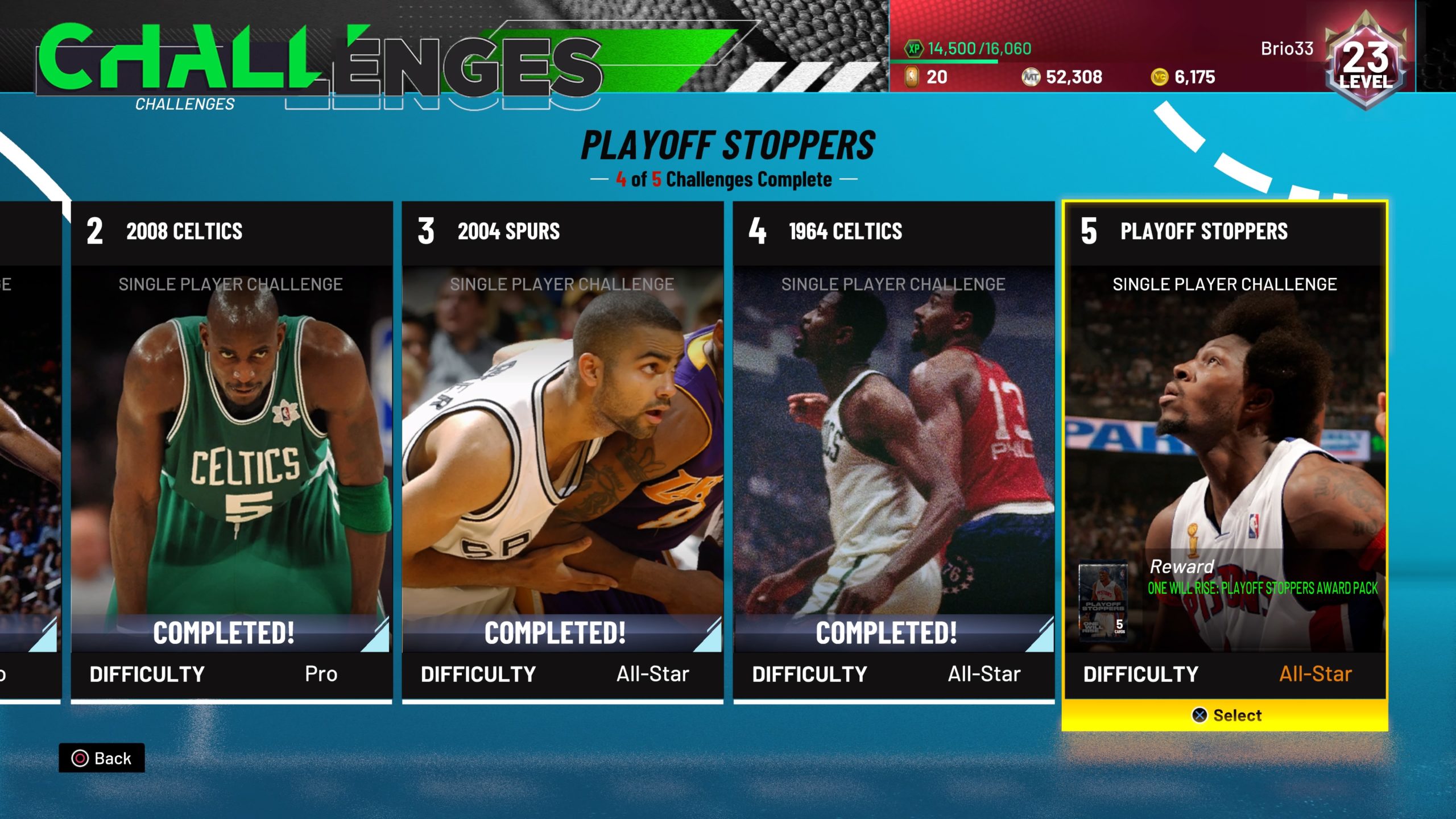 It sounds like every Tuesday we’ll get a new set of these, with a card and theme pack as the reward, plus XP for completing the games along the way. I can’t say I’m super hyped for Walt Frazier, but in the weeks ahead hopefully there will be some better players here. Mainly I’m just happy that there will be more consistent content coming, as that’s a huge upgrade from previous years where you have no idea what to expect week to week.

In the Playoff Stoppers set, I picked up ruby Bill Walton and Tony Allen for next to nothing, and they’ve been great for me. Plus the XP challenges tied to specific players have been fun to try to weave into games. Speaking of which… 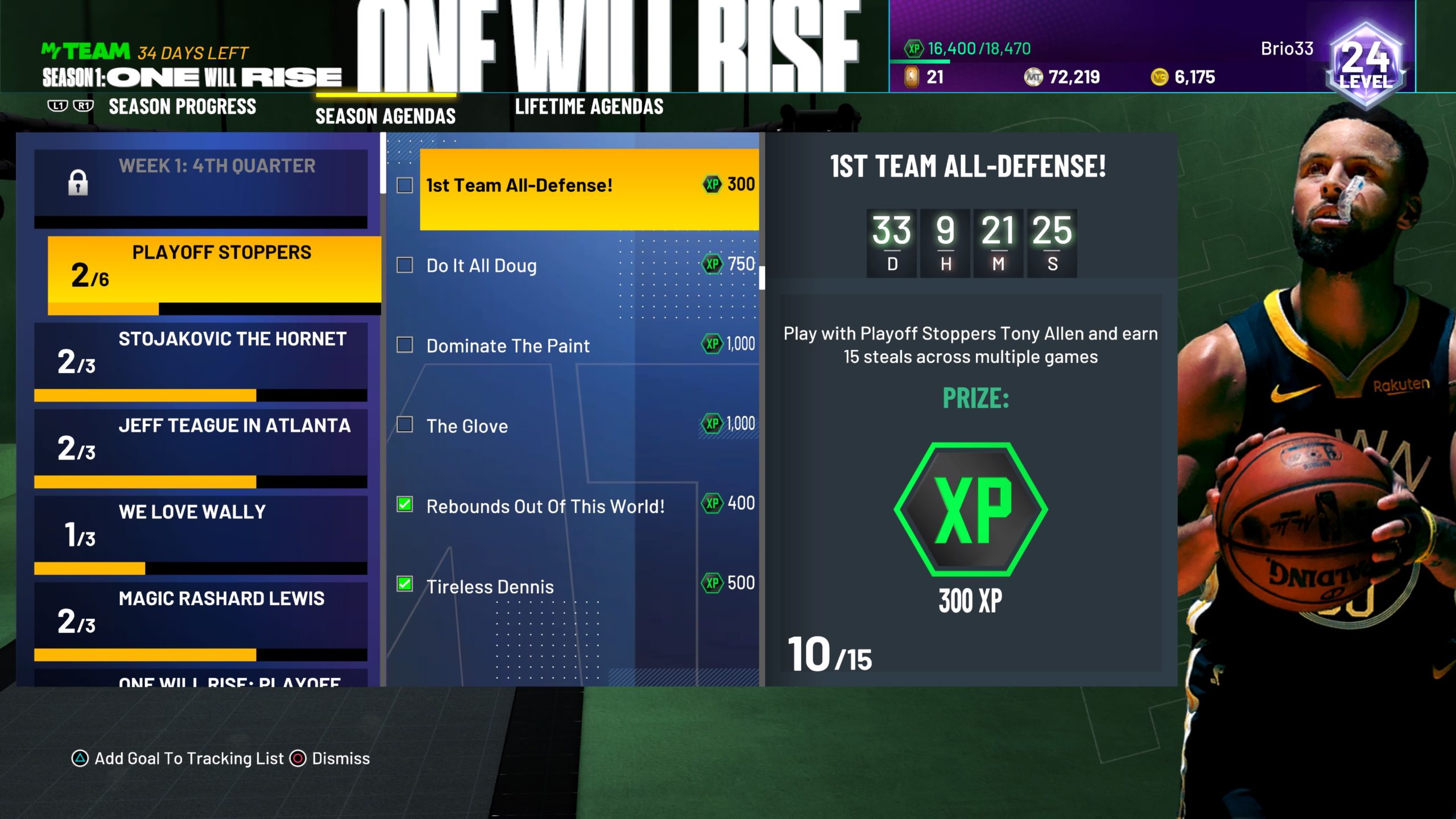 At first I was a little concerned about yet another piece of currency, but a week into the game it’s shaping up to be my favorite new edition to MyTeam.

Just having a tier of concrete rewards to look forward to and work towards is really engaging and satisfying. I make sure to check in with the game daily to see what’s new, and if there’s a strategic/efficient way to stack XP goals towards the next Ascension mini-game or towards that ruby Kyle Lowry. (I don’t see how I’ll ever get enough XP for Steph, unless they dramatically change the amount of XP earned for certain tasks, by the way.) 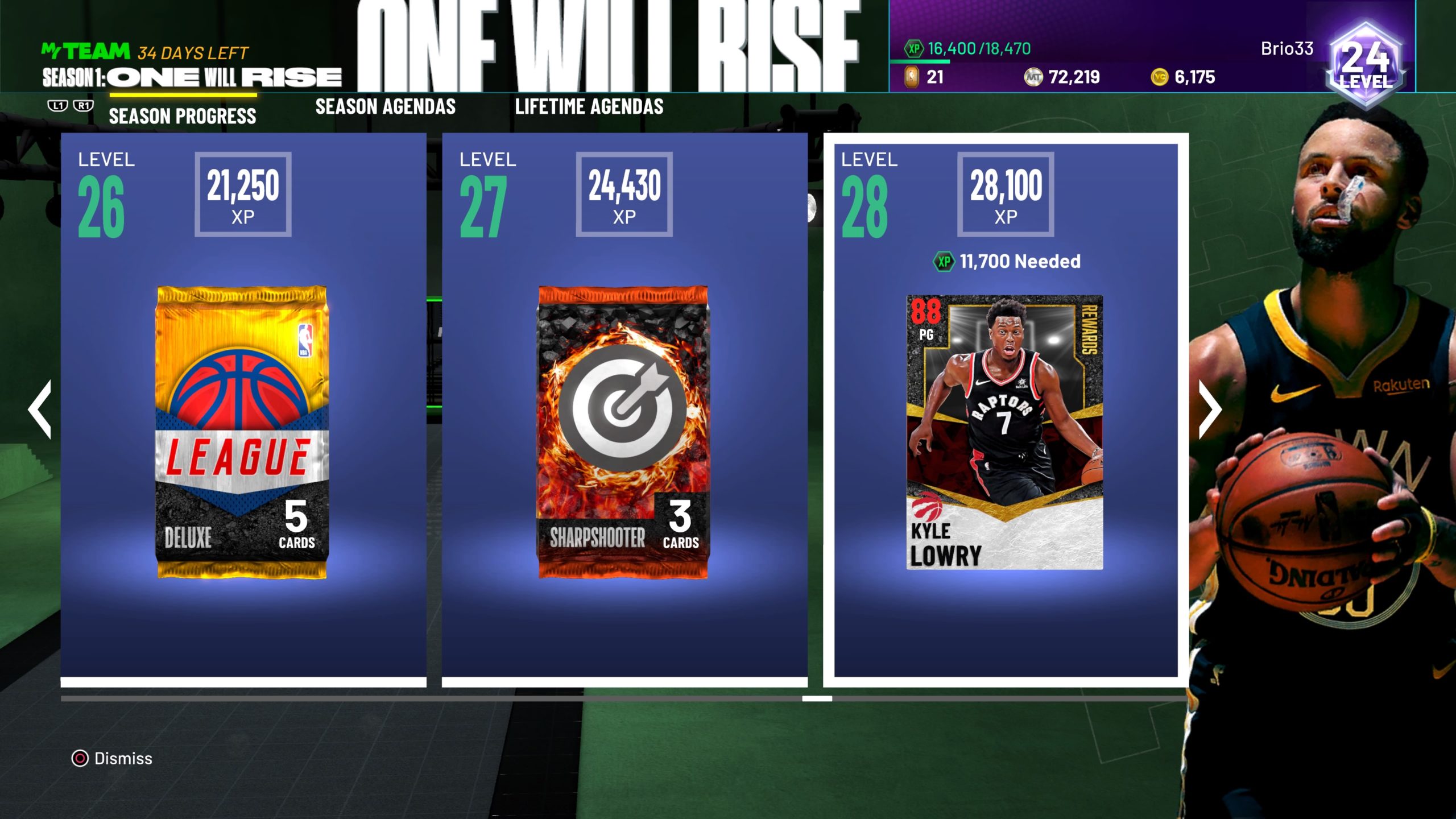 Sometimes, though, if I’m too focused on getting steals with Tony Allen, for example, the CPU team I’m playing inevitably climbs back into the game. That can get really frustrating because when a game gets close down the stretch, weird stuff happens.

I’ve lost quite a few close games, and lost out on some XP goals, due to what I can only classify as shenanigans (with a capital S). I’d happily admit that I miss the rookie difficulty, especially this early on in the season.

Finally, I’ll end with my favorite consequence of the new MyTeam world we live in, and that is the increased action within the auction house. 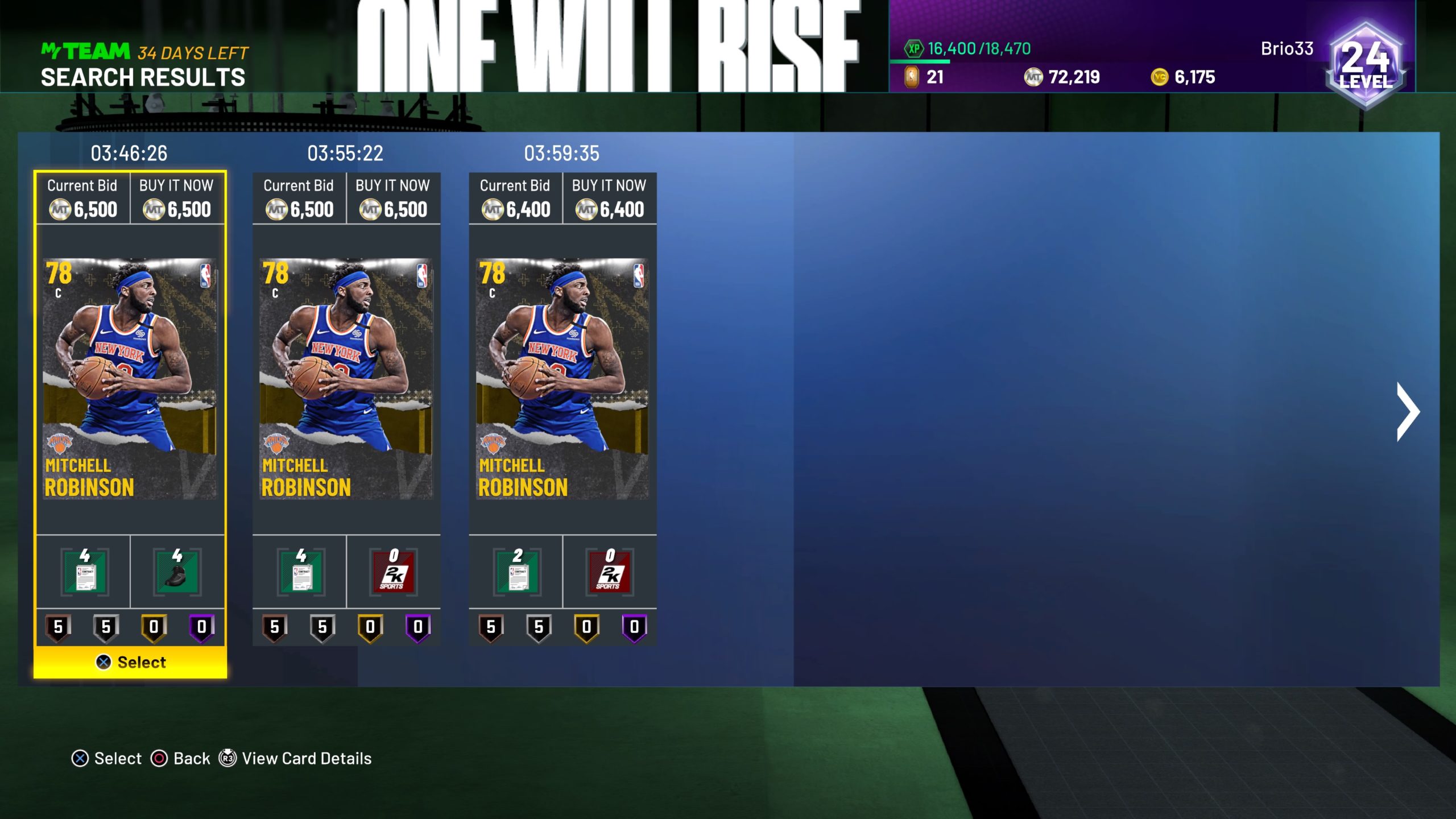 Every single day has something new to strategize around, which is awesome. Whether it’s sniping a new player needed for an XP task (gold Mitchell Robinson is crazy expensive!), or hoarding cards from certain teams (Spurs) that are needed for the Exchange, there’s more ways than ever to flip cards and earn MT.

And thank goodness, as I need all the MT I can get to buy a card that will actually hit shots on Hall of freaking Fame difficulty! 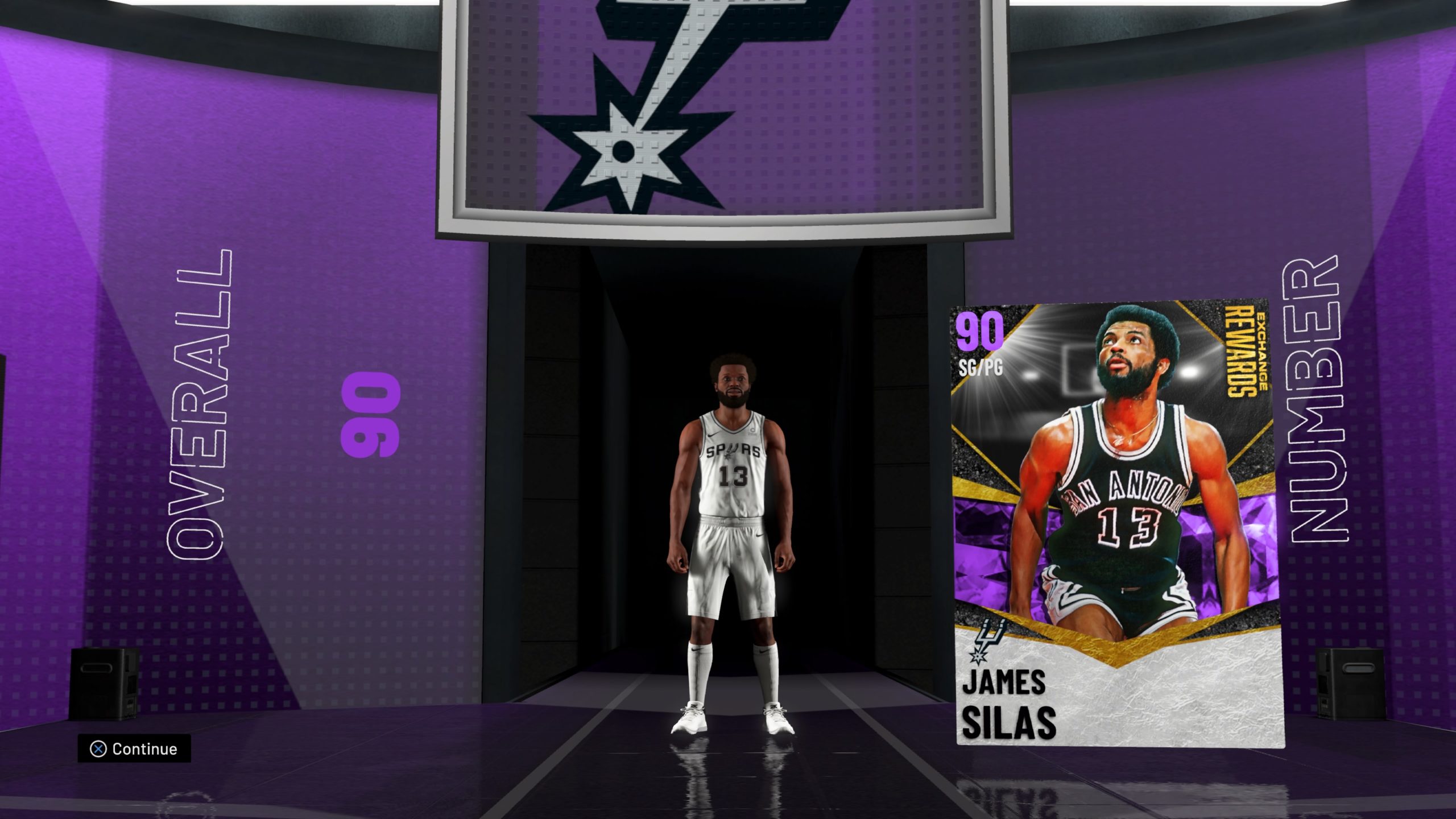 So, despite the frustrations, I’m still hopeful for the mode this year. I’ll just have to keep myself from breaking a controller long enough to see 2K iron out the wrinkles.

Other notable wrinkles include XP goals not counting correctly, some folks still not getting pre-order bonuses, and there’s a weird thing about adding or upgrading badges with some cards. Hopefully a fix is coming, as those little things all definitely add up.

What about you, how are you liking the new year of MyTeam so far? And am I missing any other wrinkles or glitches that need to be fixed? Thanks, and have a great week!