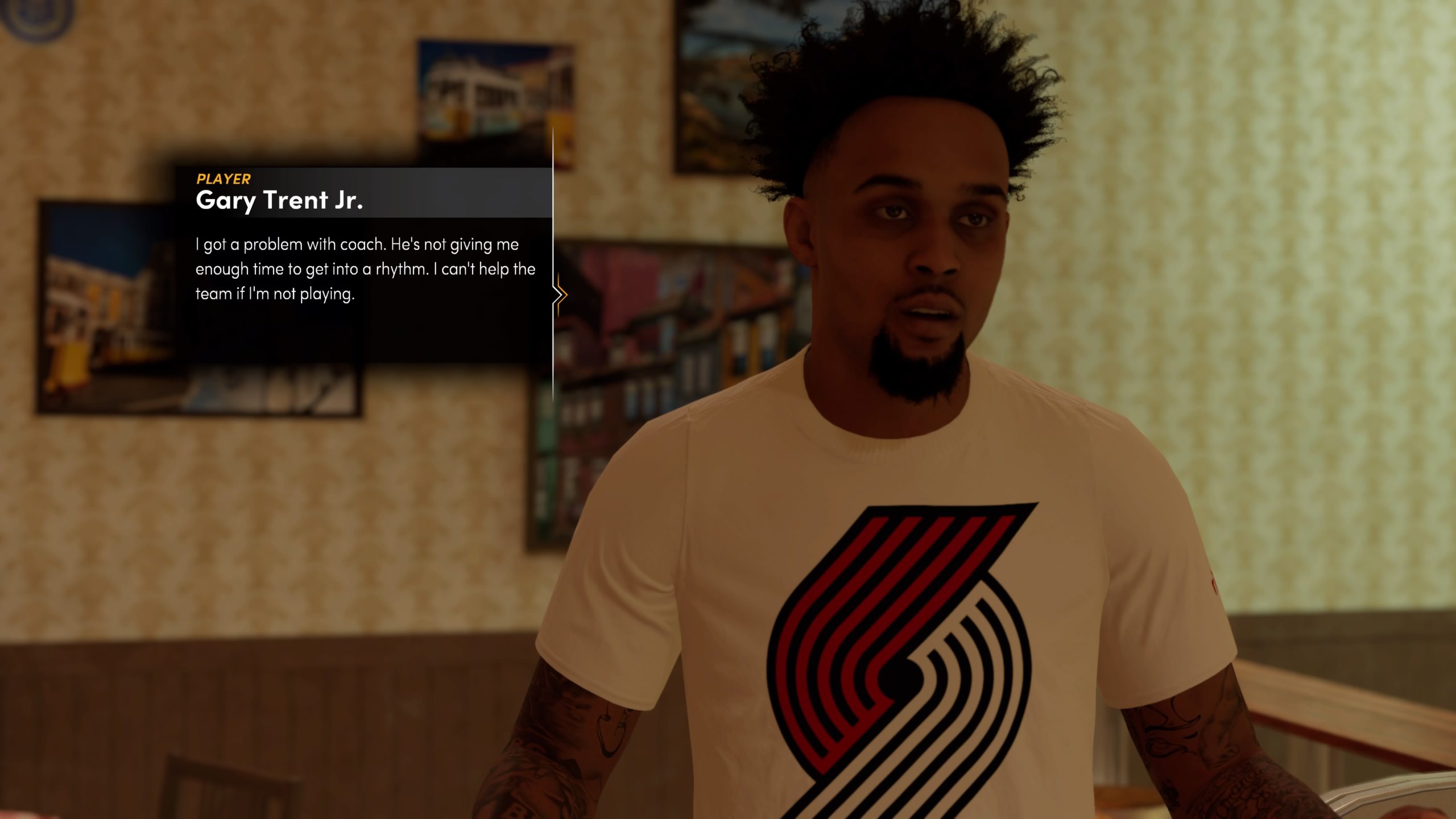 Now that we’ve had some time to test MyNBA Online, it has started to look like 2K bit off a little more than they could chew on next gen. There were some issues expected with this new giant mode but some of these issues are too big to ignore. MyNBA was teased as an all-in-one customizable franchise mode that combines MyGM and MyLeague. You can also play with friends online in an ultra customizable franchise game mode. There have been some concerns throughout the community about its functionality and they have not been addressed yet. Here are some of the key issues surrounding MyNBA Online with friends in our NBA 2K21 MyNBA online bugs report. 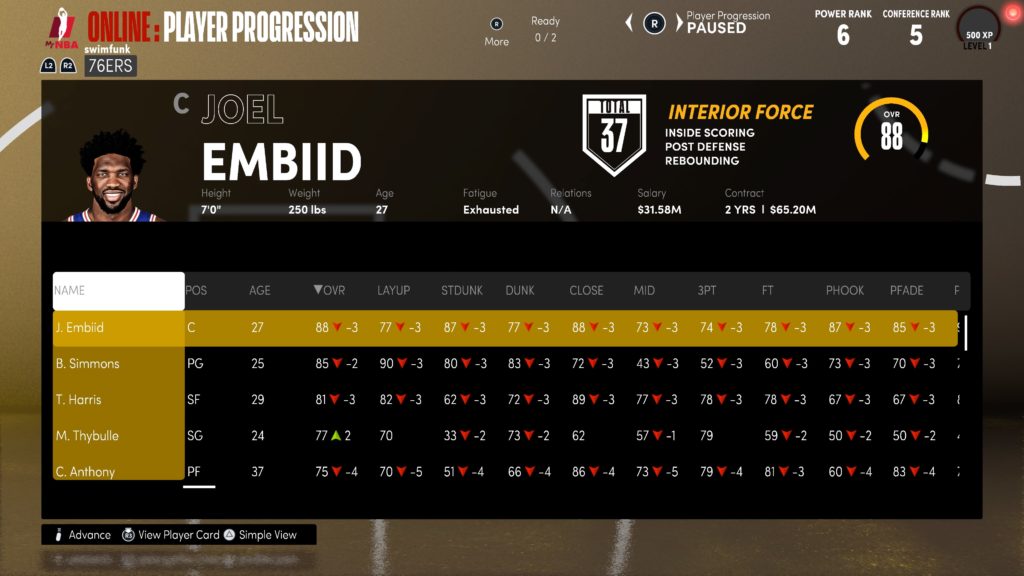 2K touted a new boom-or-bust progression system in the lead up to launch. It was described as a player can either boom (reach his potential) or bust (not reach his potential) based on in game stats, injuries and so on. Sadly, it looks like there is a league-wide bust issue going on as 90 percent of the league declines from year to year. Even rookies who just finished their rookie season regress. This issue can simply derail a league after one year because it’s not realistic and not fun to play with regressing players. There is currently nothing you can do it fix it that I can tell.

The issue seems to stem from the progressive fatigue option that isn’t available to turn off in MyNBA Online. The option to turn off progressive fatigue is available offline, which seems to lead to normal progression/regression (maybe too much progression then even). After several games, your players will become exhausted, which does not seem to really affect their ability on the court. However, once you get to progression, you have a bunch of exhausted players who simply regress. I am hopeful 2K can patch this, but it sounds like leagues that have started will have to reset as I am not sure they can fix this in existing leagues. 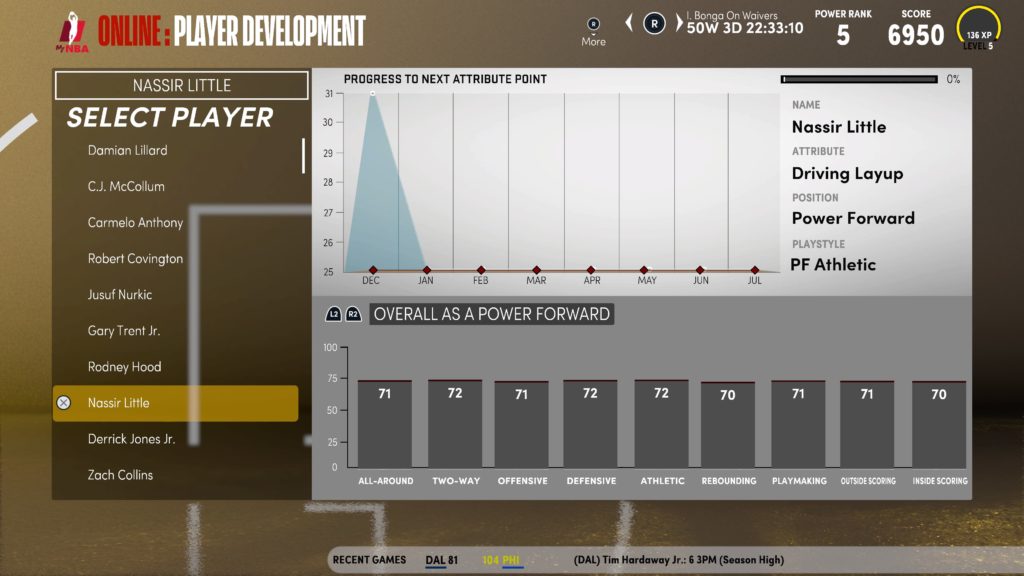 Another key new feature in MyNBA Online was the ability to train your players and have them focus on certain skills. Unfortunately, there doesn’t seem to be any correlation to training your players and having them improve. I think this stems from the fact the the league is never on a date and thus the teams never actually practice. I have not tested this offline to see if this works as intended, but I would imagine it does. It is one of the issues with having an open “flex” schedule.

Teams are given an option to skip practice in order to rest guys and be ready for the game. The practice options seem to reset and all your changes are lost. Another new touted feature that was brought over from offline was an ability to mentor a younger player. This was a really thought out feature that I am glad 2K was able to bring over to online. However, the mentors reset and badges are never transferred. There is a chart that is organized by month that states when the badge will be transferred but again without an actual league date that chart means nothing. 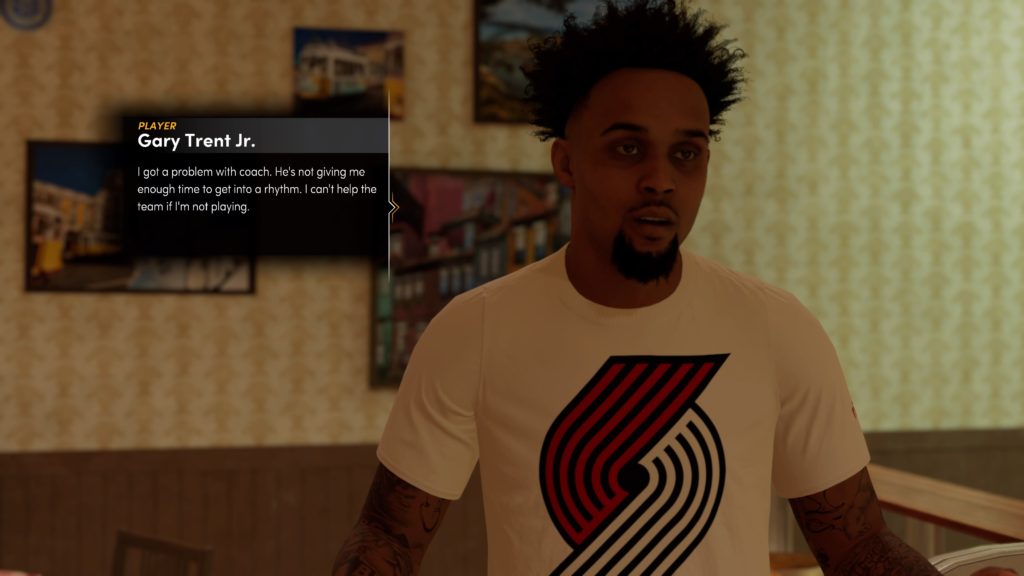 Player morale is supposed to play a big part with any team. Players generally should have a chemistry that would affect how they play on the court. Some players are unhappy with their current situation, whether it’s regarding playing time, contract status, team fit, etc. Players seem to constantly ask for more minutes even when it doesn’t seem realistic. The issue comes in when morale significantly drops and the only way to bring it back up is to constantly talk to them. Once you unlock the “chit chat to players” skill, you can constantly spam them to bring it up. This issue makes the morale pointless as users can just spam them, which will increase their overall. If you turn the conversations off, there is no way to make them happy. 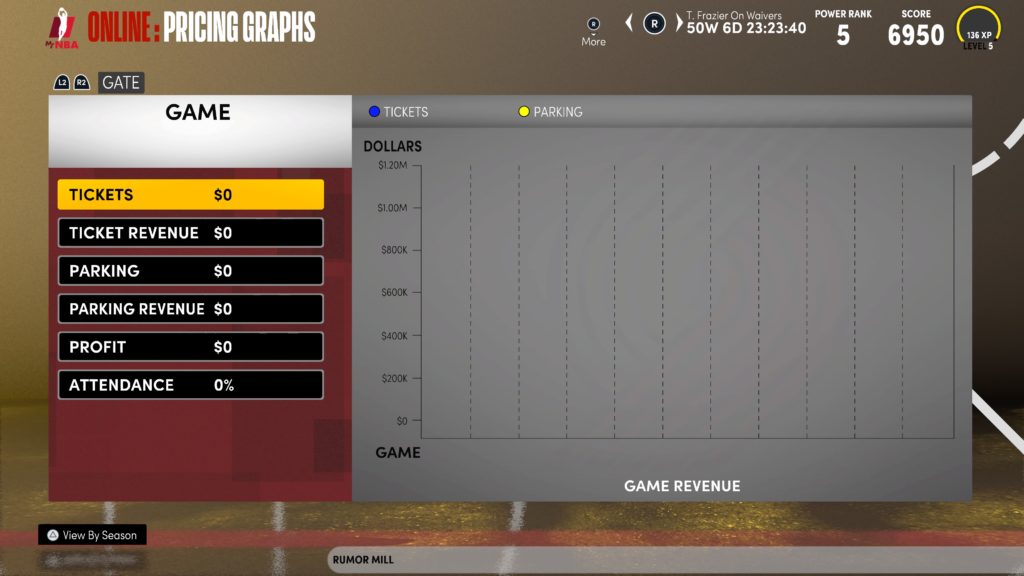 One of the key features from MyGM that made its way to MyNBA Online was the ability to be the GM that controls stuff beyond just the roster. This means controlling the price of ticket prices, concessions, food, etc. However, this seems to be just a cosmetic issue as you never get any money from any of the options. I have simmed a whole season and received $0 for ticket prices, concessions, jerseys, etc. This also seems to stem from the issue that the league doesn’t have a date it’s on. I was hopeful this would be a thing I could look at after every home game and see how I did with the fans. Sadly, it’s just an option that takes up space on the menu.

There’s even a way to see who leads your team in jersey sales but that ends up coming up blank as well. I had a task to improve my concessions for the next 10 home games. I ended up playing 10 home games and changing prices but still showed $0, which ultimately lead me to fail the task.

Another one of the cooler features was a “playable” G League. I was hoping that you could actually play another user associated with the G League team. However, it seems you are only able to play the computer. This isn’t a big deal but it doesn’t seem productive to play another user’s G League team. Also, you can play as any team so in theory I can sabotage a player on an opposing team’s G League roster. 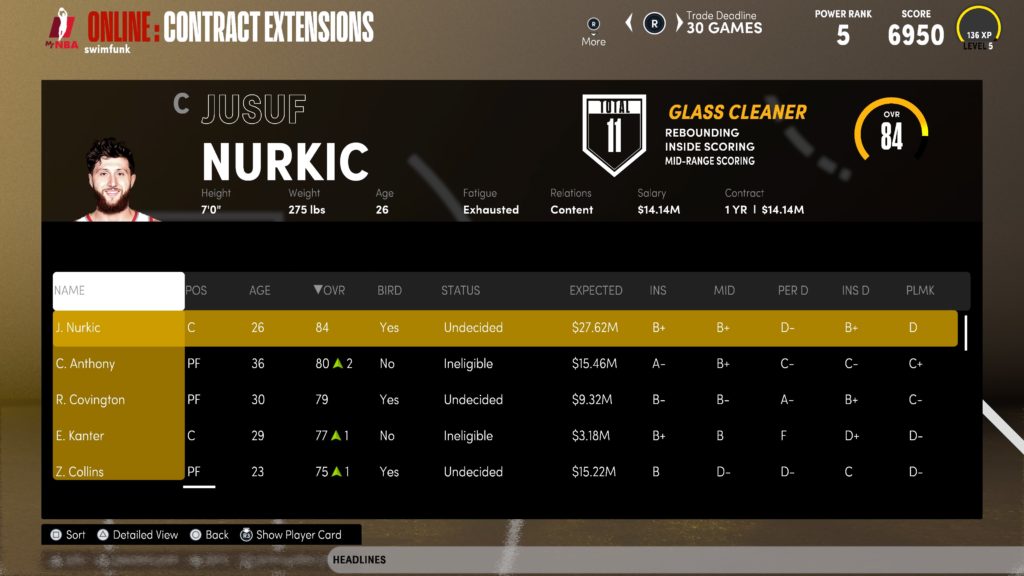 There has always been an issue with in-game injuries happening in games played throughout the league. I have tried to put the slider on its worst possible conditions (durability at 0, injury frequency at 100) to see an injury and I’ve yet to see an injury. This is a legacy issue as NBA 2K20 seemed to have the same issue. Injuries are fine and pretty frequent during sims, but they are non-existent in played games.

Contract extensions are back in MyNBA Online and they are not working again. I have yet to see a player who is willing to sign a long-term deal before his deal is up. This option is an option that hasn’t worked for years online (I am not sure if it worked offline either). I think it’s a cool and realistic idea that I wish could just work as intended, but I didn’t get my hopes up when I saw this “feature” back in the league.

During the game select screen you are not able to see your jerseys when you are playing an online game. Last year you couldn’t even see which jersey you were selecting, which created more of an issue. This year you at least can see what type of jersey you are wearing, which is helpful. It would be nice to actually view your jersey before starting the game. Another smaller issue, which is gameplay related, is the fact you can’t choose freelance unless you call a timeout. This isn’t the end of the world and maybe this is what 2K wanted, but this was an issue in the last 2K until they fixed it.

All in all, the next-gen gameplay is amazing and online matches against friends feel great because of it. Nevertheless, there are some big issues keeping this mode from striving from an online standpoint. Progression and the lack of a league date seem to be the big issues that prevent the league from really feeling alive. There are some core legacy issues that have also not been addressed. Some of these key features seem to be cosmetic and have no real impact on the league. I am hopeful 2K can find a remedy for these issues with a patch and we don’t have to restart our league.

What are you seeing in your MyNBA Online? Are there any other issues that I may have overlooked? Are there any fixes you have found for some of these issues?