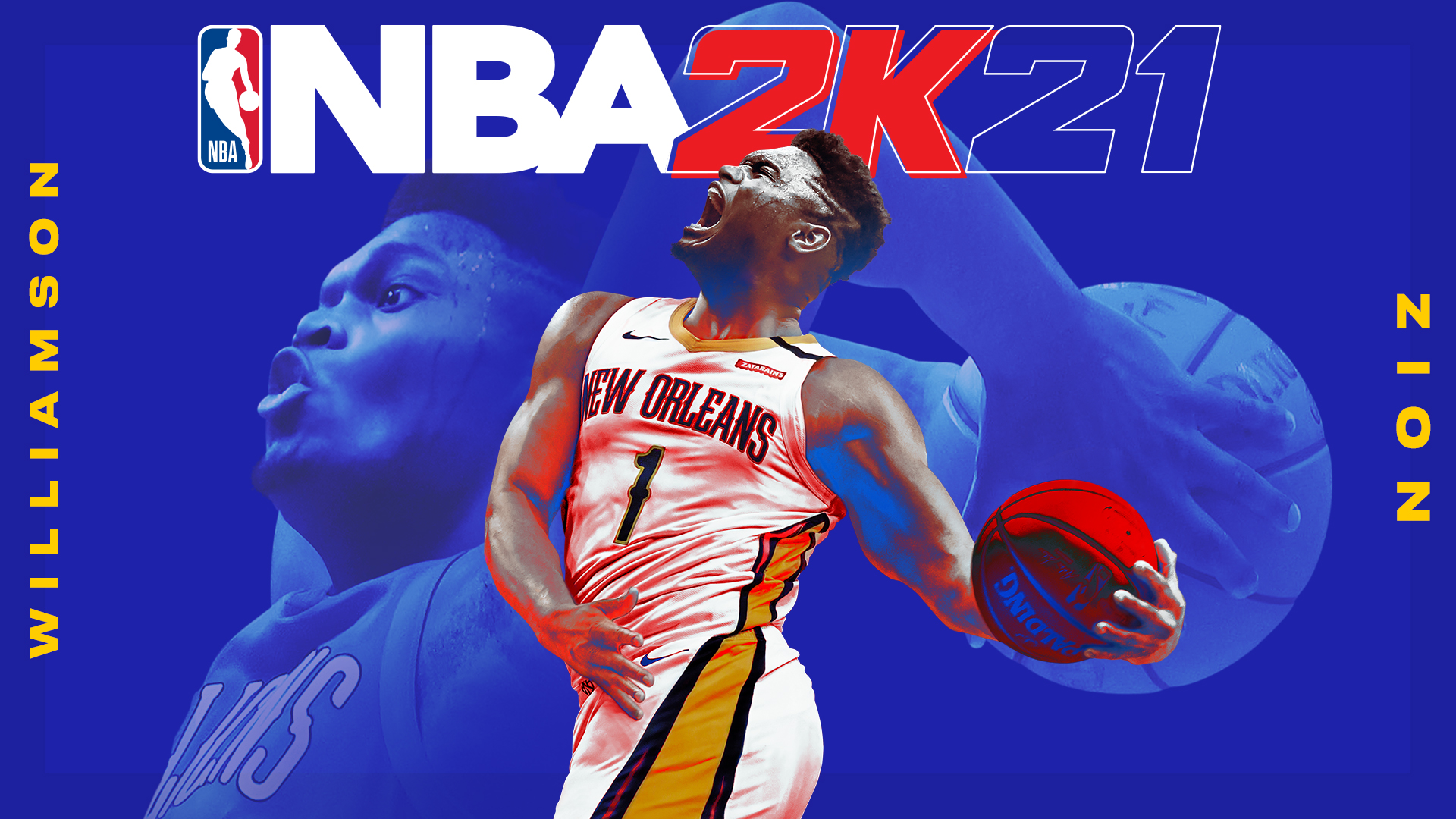 We are less than a month away from NBA 2K21 releasing on current gen. There has been little to no news regarding the game besides a nice trailer and a gameplay blog. Everyone is expecting the current generation of the game to be light on new additions for several reasons. Two of the biggest reasons possibly impacting the current-generation game are the COVID-19 pandemic and next-generation versions of the consoles. That being said, it doesn’t mean I can’t still have a MyLeague Online wishlist (MLO).

MyLeague Online has been a roller coaster throughout the years, but it seems like the devs have created a great mode after years of struggling. Last year (2K19) was a rough year for MLO as it constantly battled server issues that disrupted the functionality of the mode. This year (2K20) has rebounded nicely as they have been able to mostly remove the server issues. It’s been nice to see the development team commit to making this game mode a featured part of the game. Some of the most loyal 2K fans play this mode, and it’s nice to see it not left behind in the current microtransaction state of sports games.

That being said, here are some ideas I would love to see implemented in the NBA 2K21 MyLeague Online game mode.

Currently the servers are good, but they can still be better and more reliable. I haven’t had an offseason freeze like I had in previous years. However, I have to use a known fix to prevent that from happening (pausing the timers). I’ve seen reports of other leagues freezing in the offseason without freezing the timers. We shouldn’t have to rely on manual fixes to advance the league. There is too much time and effort being put in the leagues for it to freeze and lose everything.

Games are completed at a good rate, but this could be better as well on the server side. I normally play in a 58 game season and I would estimate I normally get four drops a season. I understand 4 out of 58 is pretty good, but it should be 0. Games dropping have a negative impact on the league because it can mess with stats and injuries. I had a game where the opposing team’s best player got hurt and then the game suddenly dropped the next quarter. We had no idea how severe the injury was and had to manually adjust it.

Overall, the servers are acceptable and improved from previous years, but 2K will always have to answer for their server issues — and we’ll always have to keep them honest on this front as well. 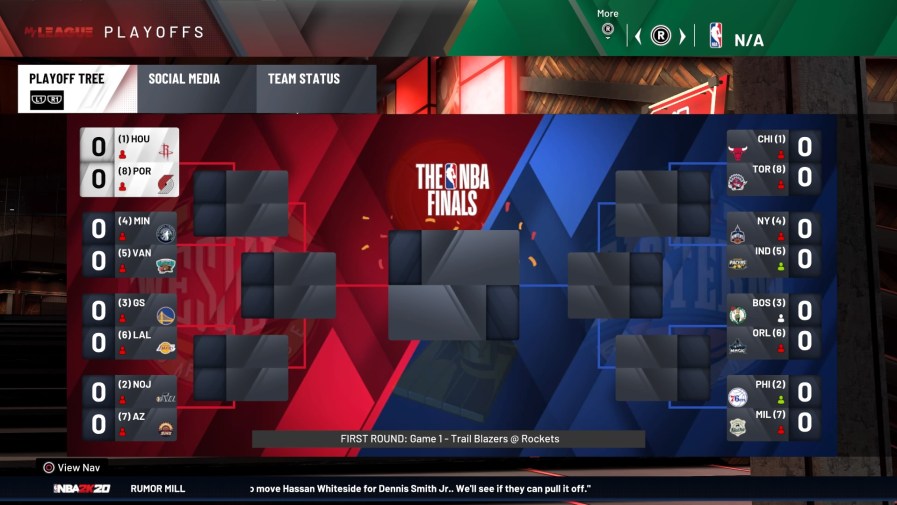 Currently, the offseason is pretty smooth because 2K has done a great job of walking you through the steps of a offseason. I understand the limitations they have when they are trying to accommodate possibly 30 users. The league has a plethora of cool features, including retirements, Hall of Fame announcements, staff hiring, the NBA draft lottery, draft scouting, combine, rookie draft, and finally player progression.

It’s really cool how 2K does their moratorium period to replicate the NBA season, but it doesn’t do a good job describing what period you are in each step along the way. I’ve watched teams lose a player a countless number of times because they think they’ve signed him then lose him because the agreement is verbal. I get what 2K is trying to do, I just wish they could display the message a little better.

Free agency can be frustrating at times because you aren’t really sure how much money you have. Bird rights can disappear and not show up on the contract screen so it creates confusion when placing bids. I commend 2K for trying to re-create the NBA contract structure, but they just need to clean up some contract glitches in order to make the process as smooth as possible.

One thing I would love to see is the removal of visible offers. I hate seeing other teams’ offers because it just gives teams a chance to test their offers against other teams’ offers. One thing I would love to see — if 2K can implement this — is to have offers that come in “early” have more of an impact on the players decision. I love that 2K offers no-trade clauses and player options, but player options don’t actually work once the season starts. 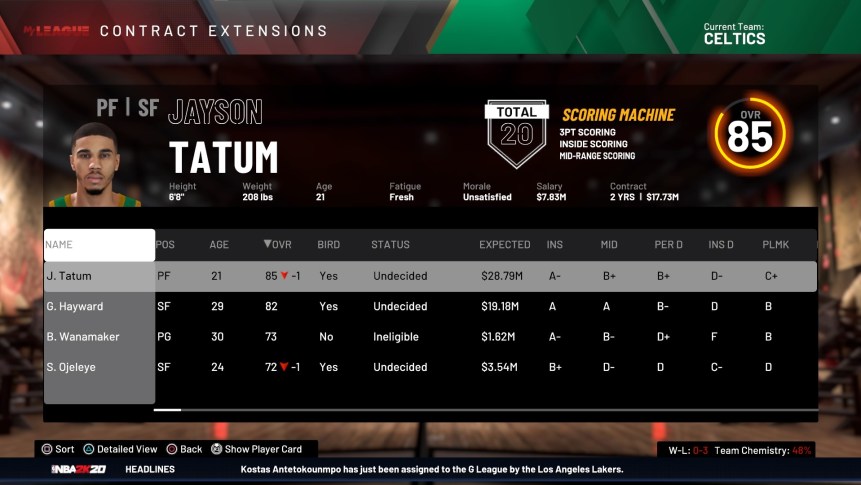 There are quite a few glitches that I hope are addressed in the upcoming game. Teams are not able to offer any contract extensions throughout the season. There is a menu item available in the mode for extensions, but every player in the league chooses to avoid re-signing so it’s a dead option for all intents and purposes. I understand extensions don’t happen frequently in today’s NBA, but it would be nice to be able to offer and sign some players before they hit free agency.

One major glitch that caused the league I’m involved with issues occurred when the league skipped a year in the middle of the offseason. Every player’s contract would advance a year, which would obviously cause a lot of issues. Thankfully, 2K has given commissioners the ability to adjust player contracts, but we still ran into several issues. Since player contracts skipped a year, it forced players who had one year left on their contracts to be free agents, thus losing bird rights.

I would also love to see a better way to deal with your own free agents. For example, after a player’s contract expires on your team, it is impossible to cut them loose and remove the cap hold unless you use the player DNA tool.

Another big glitch that we noticed was teams couldn’t see the jersey selection screen when accepting a challenge. Users had to memorize jersey order and do it without seeing the jersey they were about to play in. This can cause several issues with games being played by two teams wearing similar colored jerseys. Something this simple shouldn’t need to be addressed in an all-new game, but here we are.

Finally, injuries are very frequent in simulated league games no matter what slider adjustments you use. In fact, I’ve seen injuries in games where injuries are off. I hope 2K can tweak that slider and make it a working slider. In short, injuries seem to be plentiful in simmed games but don’t really exist in-game. 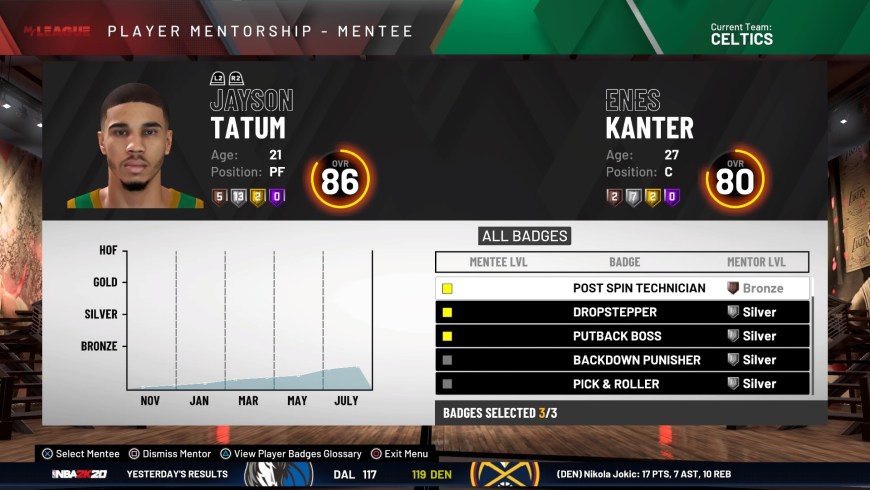 There are a couple of offline MyLeague features that I would love to see make their way into the online mode. There is currently a badge mentorship program in offline MyLeague. The mentorship program provides a way for veterans to mentor younger players and transfer a badge that fits that player’s archetype. I had to manually implement a system in my own league, and I think it would be better if this was brought in from offline.

Player training is another feature that is available offline that I would love to see online. Offline you are allowed to have players focused on abilities and improve them as the season progresses. There is no in-season progression online besides a player’s mood. The mood really doesn’t make sense because I’ve seen players playing well, the team is winning and the player is grumpy for no reason specified.

I know this will be a long shot, but offline MyLeague has a Summer League where you can test out your younger players. I know it may be hard to do this in a full 30 user league, but maybe they can implement a system where you just play as your summer team in a couple offline games vs. the computer? I highly doubt a feature like this will make its way into MyLeague Online, but what’s a wishlist without some dreams? 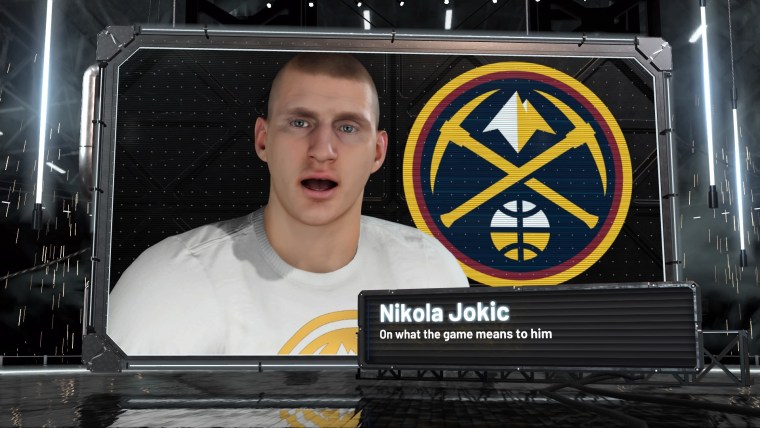 MyLeague Online does a good job of presenting the league in a general sense, but it could be better. I want to see league news more easily. I would love to see a league Twitter section next to actual league news. I think the league news section needs to be the home page of your league rather than your calendar. I would love for the league hub page to look similar to the ESPN or NBA website. It would be cool for the league to grab pictures from past league games and plaster them on the front page of the website. Maybe a system similar to the Madden CFM screen grab would be ideal.

Online games have a way smaller presentation package compared to offline games. In offline games, players see player and coach interviews. The pregame and halftime show in offline games is much better offline compared to online. Another thing I would love to see in-game is a ticker or an update of some scores around the league. I would love to see a league leaders section during the game to get more of a feel of the league. Small presentation additions would have a big impact on the look of an online game. 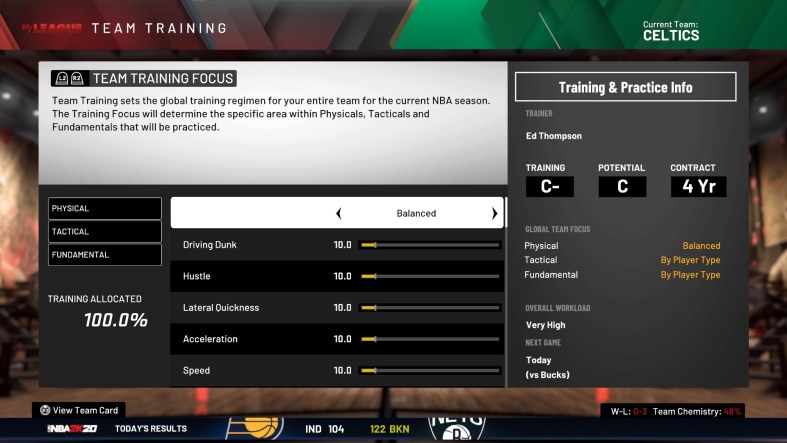 I understand that a lot of these ideas probably won’t make their way to current-gen NBA 2K21 because I think the focus is on the next-generation version of 2K21.

A couple of future dream ideas I would love to see eventually make their way to next gen include an ability to see live box scores in the game. One thing I used to love from last-gen versions of league games was a website dedicated to your league. You used to be able to watch a game via a live box score. I understand with the addition of streaming users can now watch an actual game, but it would still be cool to see a live box score of a game currently being played.

One thing that I think can scare people away from online leagues is putting too much trust in your commissioner. As of now, commissioners have too much power that is being unchecked. I would love to see a log of all the league adjustments the commissioner has made — whether it’s from resetting a game to changing a rating for a player. As a commissioner myself, I welcome the transparency that is needed to run a successful league.

Finally, when we start talking about next generation we need to address the elephant in the room, which is there may be a chance online leagues don’t make the cut for the next generation. After all, at the start of this past generation online leagues went completely ignored and really set the 2K online community back. There was very little to no communication during that phase regarding the state of online leagues in 2K14. It was such a disappointment purchasing 2K14 on day one for specifically online leagues. Please 2K do not do this again. The online league community has been through such an up-and-down relationship with online leagues, but right now it’s in a good place. With that in mind, I am really looking forward to seeing what is included in both the current and next-generation versions of 2K21, and I just don’t want to be burned all over again.

What are your thoughts on this NBA 2K21 MyLeague Online wishlist? What would you like to see included in next year’s version? Will you be happy if both versions go relatively untouched?