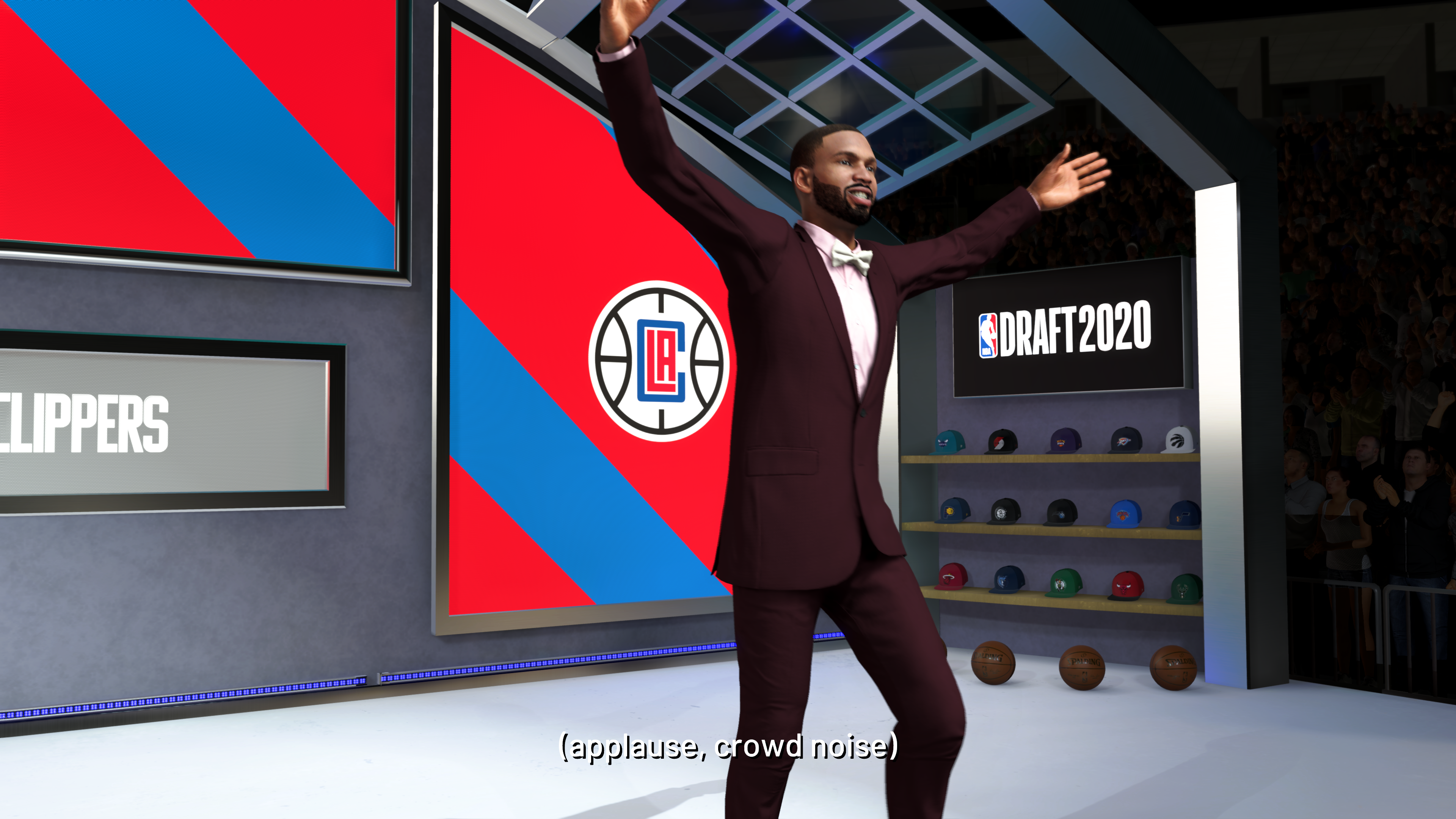 This year’s NBA 2K21 MyCareer story follows Junior, son of beloved neighborhood hero Duke. Aptly named “The Long Shadow,” Junior is a talented and raw baller turned football player who has spent endless nights on the blacktop being trained (and arguably bullied, only like an athlete father could) to surpass his father Duke. Duke, voice acted by Jesse Williams, was a top-tier talent who didn’t quite make it all the way to the league after falling short in both the NCAA National Championship game and in his aspirations for the NBA. After the death of his father, Junior is persuaded to leave the gridiron behind and step back onto the hardwood. In doing so, the inevitable comparisons begin. Let’s take a look at what 2K has given us this year in this NBA 2K21 MyCareer review.

Like last year, NBA 2K21‘s MyCareer story is well put together and well acted (if we grade on the curve of other NBA 2K stories). There was really only one small part within the story that I found to be lame and didn’t fit well. Overall, the voice acting and characters were well done. This year’s iteration, despite still being a linear story, does have some elements of choice that do affect things during your career, like fans and your personality.

Several things that I liked about the story:

-You start off in high school, which the 2K team has brought back to the game. Depending on the choice you make, you have the opportunity to play two or three high school games.

-The high school prospect ranking system is based on how you play in your high school games. From unranked to five star recruit, the realism here based off of how the real life prospect system works is a nice addition. I would have preferred a chance to play a couple more high school games.

-Your NBA draft projection is mostly determined by your play in college, but it can potentially go up or down based on various activities you participate in leading up to the draft.

-Before the NBA draft you get to choose your suit/outfit. You’re told that the style that you decide to go with lets teams know the type of personality you have.

-You’ll have the option this year of selecting between two different agents. Depending on the agent you go with, several different areas within your NBA career will be affected.

-Your player participates in a League Personality Evaluation test, which is a new addition to the MyCareer story. You are asked four questions to determine an increase or decrease in your NBA draft stock, and these questions also help to determine your player’s personality. 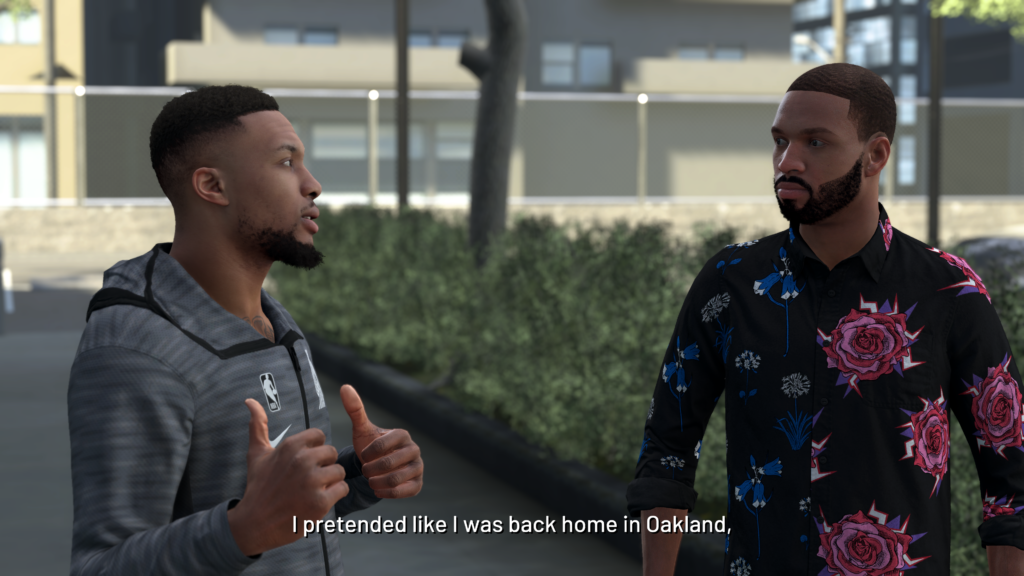 -Press Day, another new addition to the MyCareer story and lead up to the NBA Draft, again improves or lessens your draft stock. During this interaction, your player is asked three different questions.

-Unlike NBA 2K20‘s use of the NBA Draft Combine, NBA 2K21 has you go through other activities that would be performed by a potential draft pick. Another new addition to this year’s MyCareer story is your choice of teams that you get to have a private workout session with. In doing this, you only get to choose one team to work out with. My suggestion here is to choose a team that has a roster that not only works around your player/build, but one that will help you grind out your badges in quick succession.

-Damian Lillard makes an appearance to give you advice before your team workout.

-One last opportunity right before the NBA draft allows you to potentially increase, decrease or leave your draft stock unchanged.

As you can see from the points above, there’s a good bit here that makes this year’s MyCareer story an enjoyable experience. Of course, not everything is perfect all the time, as there’s definitely a few areas that could use some love.

Easy On The Cheese

The NBA 2K series, since its implementation of MyCareer “mini movies,” has generally done a good job giving us a story that we could follow along with while trying to reach the fame and fandom of the NBA. Unfortunately, there have been misses in some years. There’s also usually one or more cheesy elements to the story that make me cringe while watching the respective cutscenes.

This year’s iteration didn’t let me down, with two situations where I watched the cutscene while yelling at the TV because what I was seeing was just straight blue cheese. I’ll leave it to the community to play through, if they haven’t already, and you can comment on what you all thought was lame.

The MyCareer cutscenes and narrative usually wraps after you get to the NBA (sans some NBA cutscenes and such). You just get to the grind for your badges and trying to reach 99 overall. One thing that we saw lots of before were little cutscenes where you’d meet with your agent and different representatives of the companies that you had endorsement deals with. Last year, you’d have different events where you could gain more fans. This year, all of these interactions are gone.

I’m going to go with the assumption that these things were removed and will be in the next-gen version of 2K21. That’s the only thing that makes sense to me because after having all those cutscenes and interactions in the game last year to now having none of them at all is a really questionable decision. Yes, these are small nuances that may not matter to most, but these things really mattered to switch up the flow of the badge hunting and overall grind. We’re now greeted with e-mails from our agent that look like we’ve gone back in time to 1999, an era where we were using iMac G3 computers and dial-up internet.

When you have VC to pick up from your agent, you no longer go inside the office to pick up your check, you sit at the front gate of the office and hit the X/A button to pick up all the VC available. It really seems like the experience this year has been whittled down to the two(ish) hour MyCareer story to then send you off on your own. 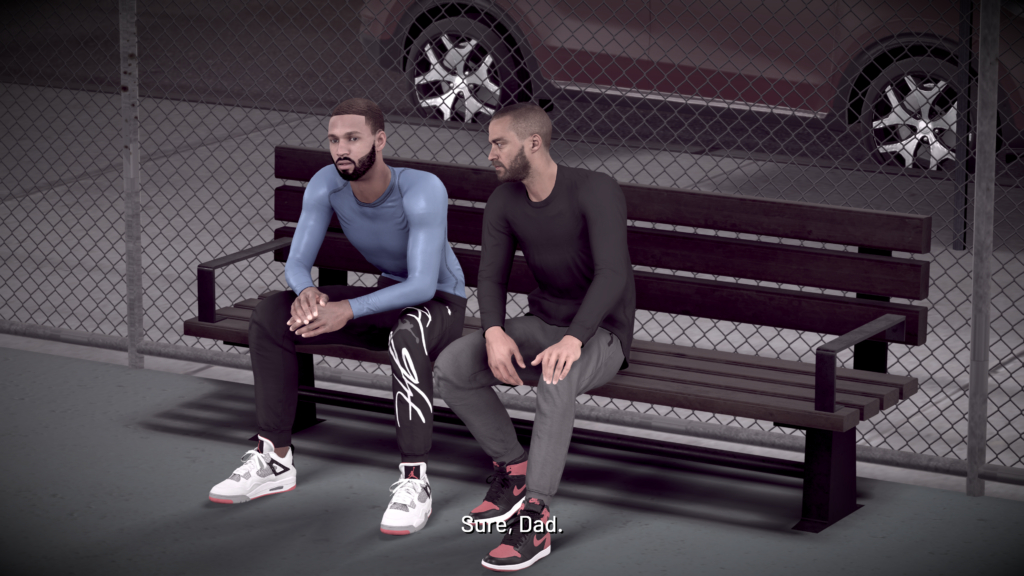 Another thing that I’d like to see implemented into the MyCareer story is more flexibility regarding your player and the decisions you make as you try to ascend towards becoming a lottery pick in the NBA Draft. Firstly, can we please get rid of the cheesy nicknames every year? Freq, Che, AI — every year we run through the story our character always has some gimmicky nickname that I’d think most of us don’t care for. If we have to have a nickname, giving us the choice of what it is from the database that is already in the game would be a better choice. In doing that, it would at least feel like we have a little more control over the narrative regarding our player.

I’d also like to see more robust scenarios that cause our MyPlayer to have to make decisions within the story that either positively or negatively affect our path to the NBA. The scripted narratives have been fine, but it’s fair to argue that it would be more interesting and engaging if we could have a little more control over the path our player decides to take to make it to the league. I’m sure this would take more manpower from the dev team so it’s probably not feasible in a year where next-gen 2K is still coming as well.

In saying that, I think the power the next-gen systems appear to be bringing us could allow the possibility of a deep MyCareer experience that could change the mode as a whole for folks who are well versed with the mode.

MyCareer isn’t technically a deep mode as you play through the story narrative until you reach the NBA. Its direct link to the Park/Neighborhood experience, although intertwined, still leaves it sitting on its own. Besides the gripes I mentioned above, I can say that I did enjoy the MyCareer story this year. I’m happy the 2K dev team brought back the high school experience and tied that into college. With that in mind, I’d definitely like to see a few more games in high school and college. Adding in some more colleges would be nice as well, with some sort of implementation of showing schools trying to recruit your player from/during high school.

All in all, the MyCareer story was solid and left me satisfied enough for now.

Have you played through the MyCareer story? If not, do you plan on playing through it or are you going to skip it? Are you looking forward to what the NBA 2K21 next-gen MyCareer story might bring?