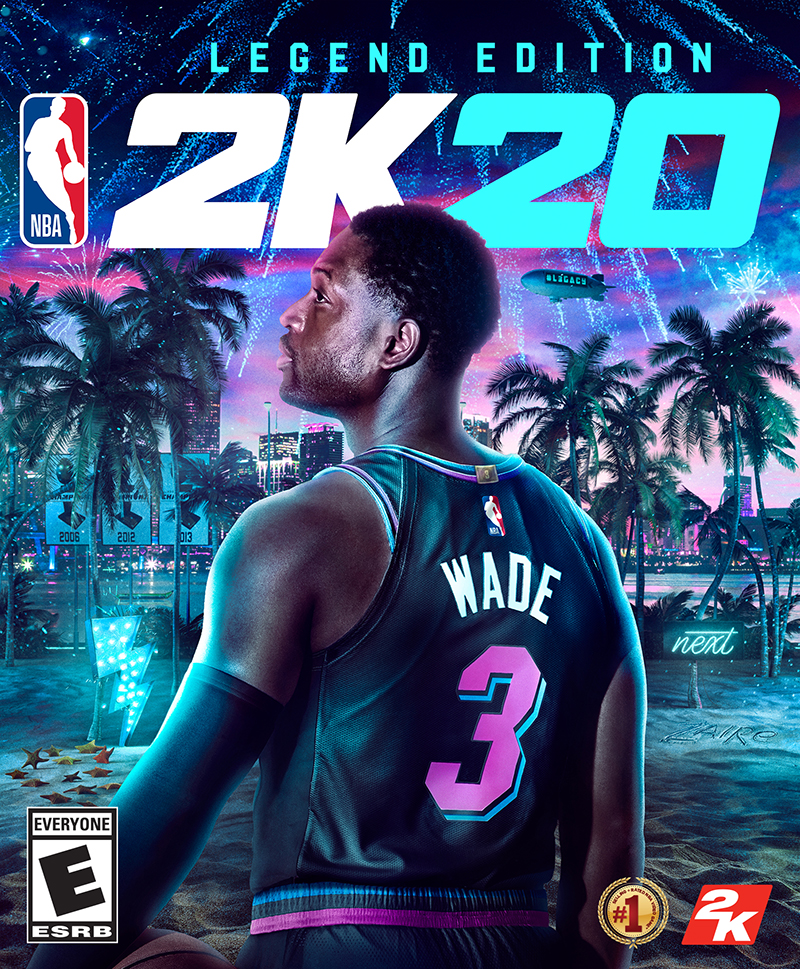 We’re days away from #2KDay, or in simpler terms, the release of NBA 2K20. Despite my complaint about being unable to do anything besides use the MyPlayer Builder or go to 2KU in the demo, I’ve come to the realization that my assumption about the 2K development team banking on fans wanting to use the builder was probably correct. I also think the team understands that they might have a product on their hands this year that could be the best playing iteration of the game in years. With that being said, let me quickly take you through a look at some key information about the game that could potentially help fans make a decision about whether to buy NBA 2K20 or not.

NBA 2K20 comes out worldwide on September 6, 2019. It will be available for the following platforms:

There have been no official details on the Windows PC requirements as of yet, but it’s possible that that information will drop over the next few days before launch. 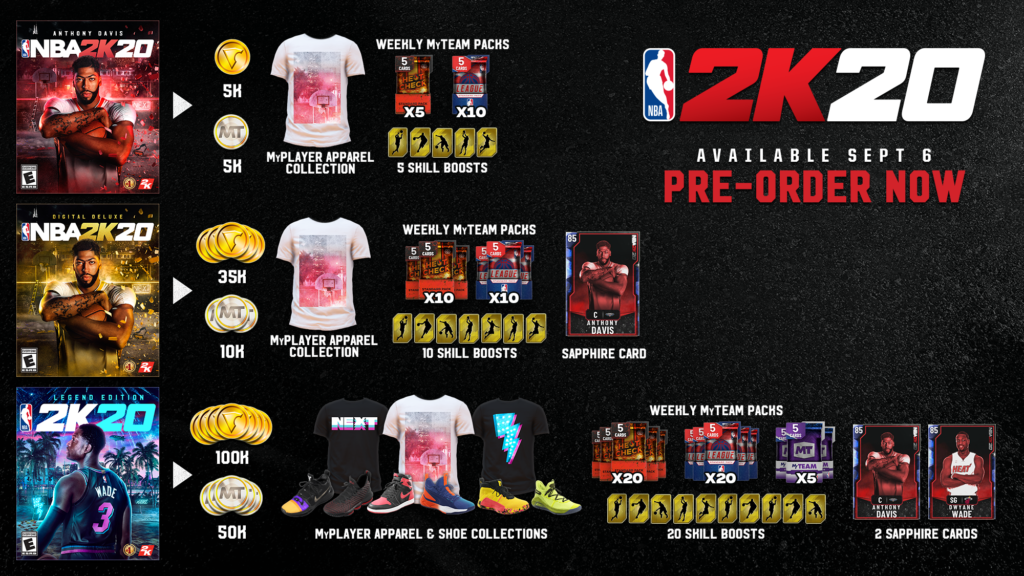 There are three versions of NBA 2K20 being released to market this year, each with their own pre-order bonuses:

You wouldn’t have a fully complemented NBA 2K game without a strong soundtrack, which we’ve seen over the last few iterations of the game. Playlists curated by Travis Scott, Noah “40” Shebib and DJ Premier since NBA 2K16 show a continued tradition of lacing us with great tracks to go along with great gameplay. For NBA 2K20 a unison with UnitedMasters, a new music venture started by industry legend Steve Stoute, sees the soundtrack for this year’s game featuring top hits from today’s hottest artists. This collaboration also gave way to the announcement to find the “Next” Artists, where music artists have from August 1 to September 15 to submit their tracks using the UnitedMasters app to have a chance to see their song featured in-game. You can check out the soundtrack here. 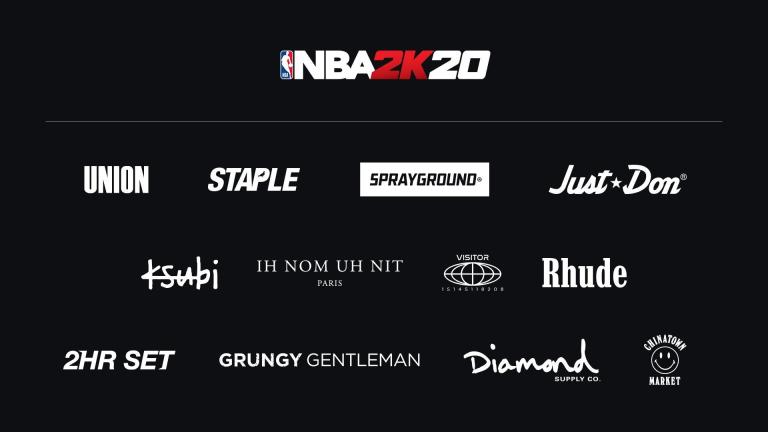 Another area of the game that people usually spend a lot of time scoping out relates to equipment, specifically in terms of fitting their MyPlayer out in the latest gear and threads available in the Neighborhood. Twelve new brands were announced at ComplexCon to be in-game at launch. You can see the brands in the screenshot above.

One of my favorite things about NBA 2K (complete sarcasm) is back again this year. It’s without question that VC is a necessity to be able to compete with other players in the Neighborhood and MyTeam. Ronnie 2K confirmed on one of his streams that VC prices will remain the same as they were last year. Another big thing that drove some people nuts but has been removed is being able to create a new character without having to use VC to rebuild them. This last fact is a very big deal and should allow you to create several builds without wasting VC.

The NBA 2K20 demo was released on August 21. It allows you to try the MyPlayer Builder, creating builds you’ll potentially use for your MyCareer, Neighborhood and Pro-Am. It also has 2KU, allowing you to practice and learn various areas of the game. The demo was released to mixed impressions. You can take a look at the Operation Sports staff impressions to get an idea of how the demo was received by us.

For those who played the demo, you quickly realize once you get into a MyPlayer Builder test game or a 2KU scrimmage that NBA 2K20 feels like a new game. For the people who didn’t get a chance to play the demo or haven’t played NBA 2K at all, this will also be the case for you. This is because the 2K developers made changes to the gameplay in NBA 2K20 that bring the experience closer to a how the real NBA feels. The overall speed of the game has been slowed down; players move, plant, cut and dribble more in tune with real life. Dribbling has been retooled and feels much more realistic. All I’m getting at here is that spending an hour in 2KU to get yourself acclimated with the feel of the game will be doing yourself a big favor. Once you feel comfortable with how movement, dribbling, defense (which requires much more user input) and the other changes made play, you’ll be ready to hit the court for real and school your friends.

We got a good look into the MyPlayer Builder in the NBA 2K20 demo. One thing that has been preached is that the builder offers a large amount of options to create the ideal archetype that you want for your player. There’s apparently many more pies in the final version of the game that we didn’t see in the demo, which we heard from Ronnie 2K in a clip that is on Twitter:

There were also rumblings of the possibility that we would be able to use custom pies to really have full control over our builds, but that turned out to not be true, as also heard from Ronnie 2K:

Ronnie says we wont have custom pies, but there will definitely be more options with pies in #NBA2K20 pic.twitter.com/2nzIsaqyZF

These two clips definitely leave some intrigue and curiosity into how much more flexibility builds might or might not have come retail launch.

The Ladies Can Ball Too

The WNBA is in NBA 2K20 and is represented quite well. While I didn’t get much in-game time with the WNBA teams and players at a recent preview event, Forbes writer Brian Mazique threw down a very good piece that breaks down the WNBA’s well-executed inclusion in this year’s game.

NBA 2K always shows love to classic teams and this year is no different. The 2K development team added well known modder R4zor to the team to help with renders, player faces and models that already look to be fantastic. He’s also working closely on the classic and legend teams that will be in the game. Six new classic teams have been added in-game, as well as all-new legendary teams. This is definitely very exciting to see for the game.

I Got This Boss

MyGM has been revamped and we’ll get to experience MyGM 2.0 in NBA 2K20. The depth in the mode is a plus and will extend the life (and challenge) of MyGM. Take a look at the NBA 2K20 Franchise developer blog to read the full details.

Playing With A Full Deck

MyTeam also saw some revamping and changes that should make the mode more fun, engaging and rewarding. Features like the new Card Evolution, a re-designed single-player Triple Threat and the new Prize Wheel will have both MyTeam players old and new jumping into the mode daily to stay on top of their decks while working towards building a strong MyTeam to conquer all comers. The NBA 2K20 developer blog digs into the details of all the changes and additions we’ll see come launch day.

NBA 2K20 looks to once again show why it’s arguably the best sports game on the market. With the information above as well as the videos and gameplay footage available on YouTube, you can really get a sense of how this year’s game is shaping up.

Are you going to buy or pre-order NBA 2K20? Which version are you considering? Drop a comment below to let us know.

Cancel reply
Discussion
Click here to reply to the discussion
Continue Reading
You may also like...
Related Topics:basketball, nba, NBA 2K20, nba 2k20 before you buy