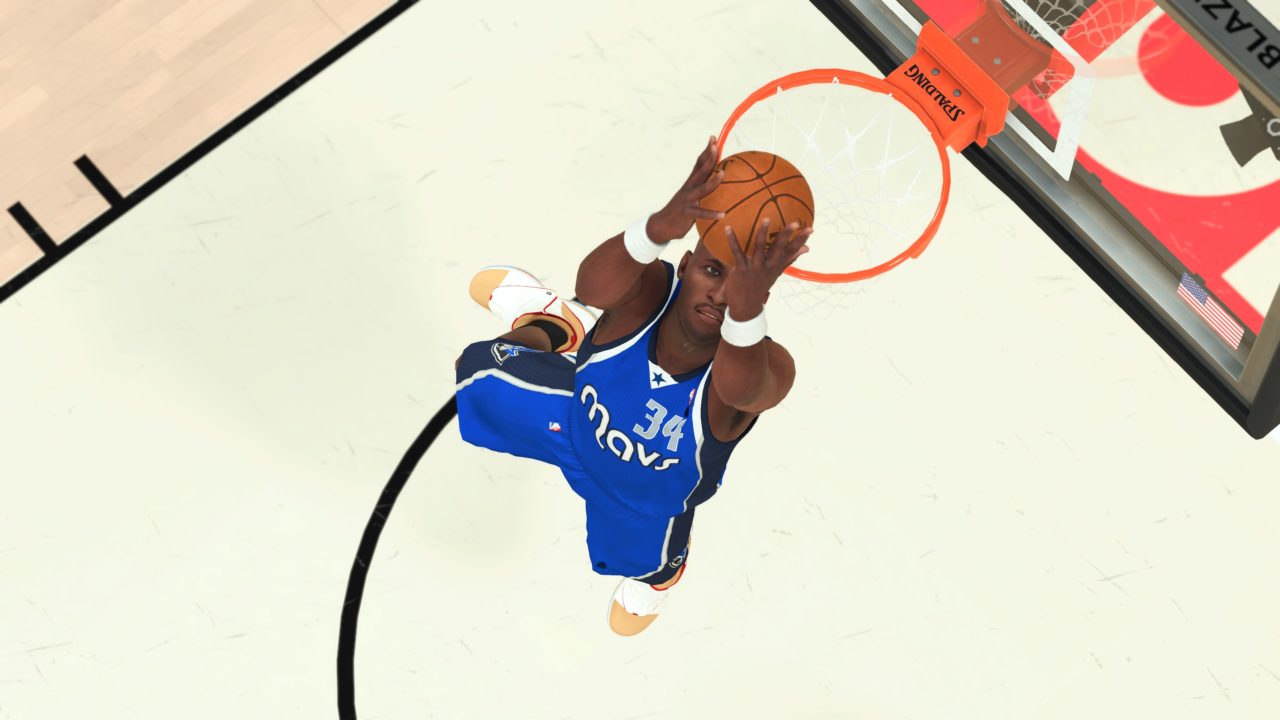 This one has been tricky to write. I’ve stopped and started a few times as my thoughts/experiences/feelings concerning MyTeam have been all over the place these last few weeks. Unfortunately, it’s mostly been negative.

I won’t even get into the technical difficulties as that would be beating the proverbial dead horse. If you’re in the dark, hop on Twitter and read some MyTeam threads. They’re hilarious and sad. But personally, the main things keeping me from playing as much as I have in the past are related to the gameplay and the key new features of the mode itself. 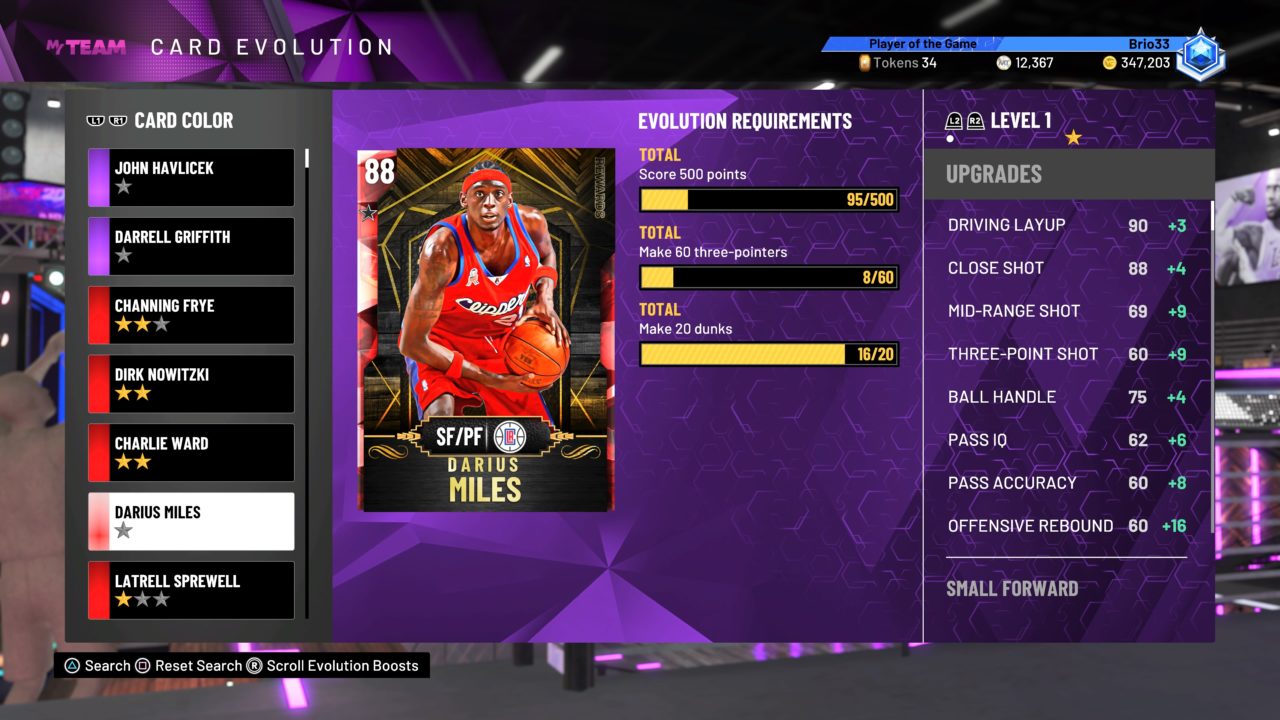 Evolution Cards Are Good But Frustrating

I’ll start with Evolution cards, or arguably the greatest addition to the mode in years. The layers of complexity and strategy that they add are wonderful, and I’m sure their integration into the MyTeam ecosystem will improve over time. But just as I hear and get excited about a new evolution card, and the impact it may or may not have on my lineup, I quickly come back down to earth as I remember the hard truth about MyTeam.

The mode is here to make money.

In the back of my mind, I know that any time and effort I put into evolving a card will ultimately be wasted, as a newer/better/more powerful card will be released within weeks or sometimes even days. Yes, this is fundamentally how MyTeam works, but with evolution cards the time commitment and emotional connection to cards is greater than ever. I hate to think about them becoming obsolete so quickly. It’s truly frustrating.

Then sometimes, as is the case with Dirk Nowitzki for example, the new/better/more powerful card will even be the same player over and over again. No, 2K, I don’t want to grind another Dirk evolution card a mere three weeks after I finished grinding his “Starter” card. Is there not a way to count the work I put into that Starter card towards his Spotlight card? You know, similar to the way I could take community college credits and apply them towards a more prestigious college upon transferring? That might help me feel better about this sudden double-dip. But then, to add insult to injury, for those of you who play online it looks like there’s going to be a pink diamond Dirk released sooner than later as an Unlimited reward. Yuck!

So I think either the statistics required to evolve these cards need to be simplified, or the final evolved versions of these cards need to be worth the effort. Reward the people actually putting in the time versus the people just opening packs. Better stats? Better badges? Maybe even an ultimate evolution could come with a diamond contract or shoe? Or better yet, why do cards have to have evolution limits? Let me evolve my Starter Dirk all the way to galaxy opal. Don’t make it easy, certainly, or just have new evolution tiers open up on certain dates as the year progresses, but by the time I get that Dirk to diamond there will be ruby and amethyst power forwards with better stats and better hall of fame badges on the auction house for stupid cheap. 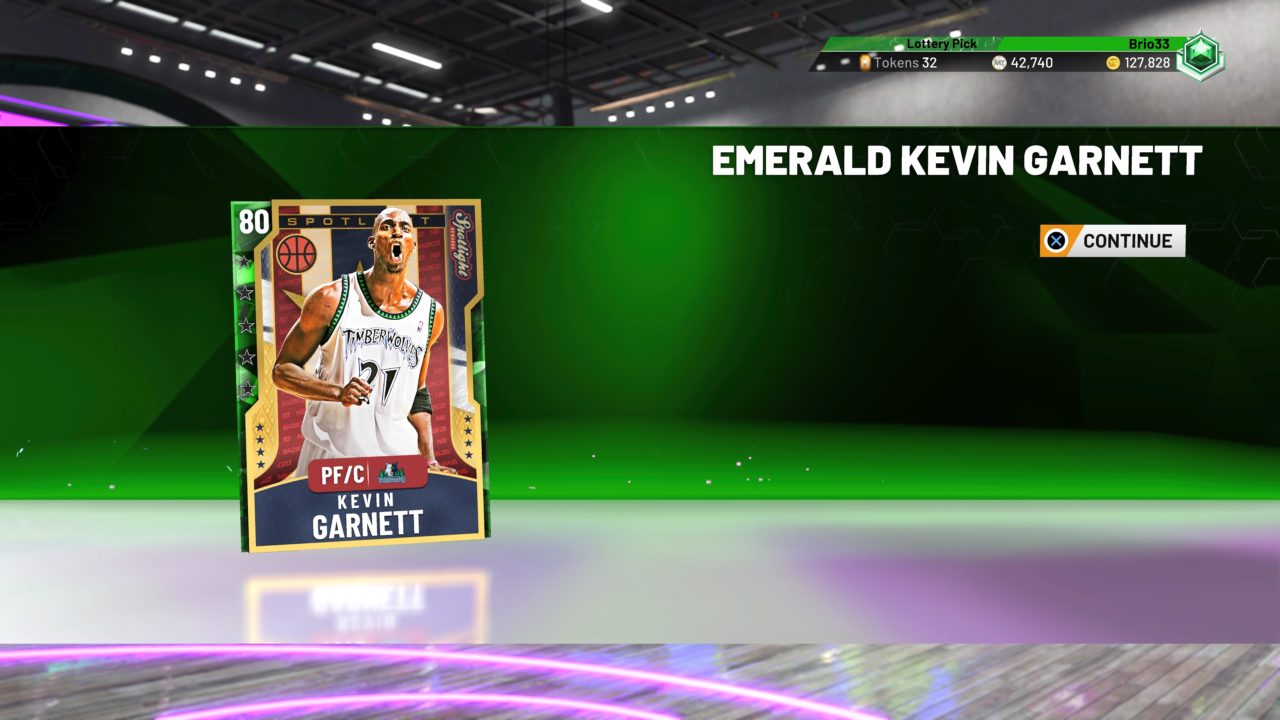 I’ll end this section by pouring one out for the evolution cards I started but gave up on because I realized that the grind wouldn’t be worth it. First up, the reward cards like Cedric Ceballos or Spotlight Wade, KG and now Dirk. Getting 10 steals with KG is ridiculous. Rebounds, yes. Blocks, definitely. But steals? Come on now. Then there’s a Triple Threat reward card like Darius Miles. I love Darius Miles, but I’m not about to waste Domination games on rookie difficulty to try and grind 3-pointers. The dude can’t shoot, and even after completing the requirements, it’s not like he suddenly has amazing stats and can make threes.

Speaking of Domination, how about Domination reward evolution cards? I’m certainly not wasting my time evolving emerald bench players just to get a ruby Danny Green or Shaun Livingston that I could then evolve to amethyst when I can already get awesome amethysts for crazy cheap elsewhere. Oh, you think I really want that Jason Richardson? No thanks. Plus by the time I evolve J-Rich to opal, the rest of you would be playing 2K21.

There’s plenty more, but finally I’ll call out poor John Havlicek. His amethyst has been my favorite card since week two, and I’m only about 50 points away from evolving him to a diamond. But then what? It only gets him a second hall of fame badge when there are already amethysts out with better badges and stats. I guess I could sell him? But what amount of MT would be worth the time I put in? I saved up and spent about 100K MT to buy him a while back, and I bet at this point I’d lose MT selling his diamond. That stinks.

Basically, unless you’re grinding these evolution cards ASAP and focusing on nothing else, it’s not really worth it. And doing that isn’t a very fun way to play, in my humble opinion. I’d rather the stat accumulation be happening in the background, like earning XP in most any other RPG, instead of grinding the game so specifically that I’m playing entire games just to try and get KG one freaking steal. 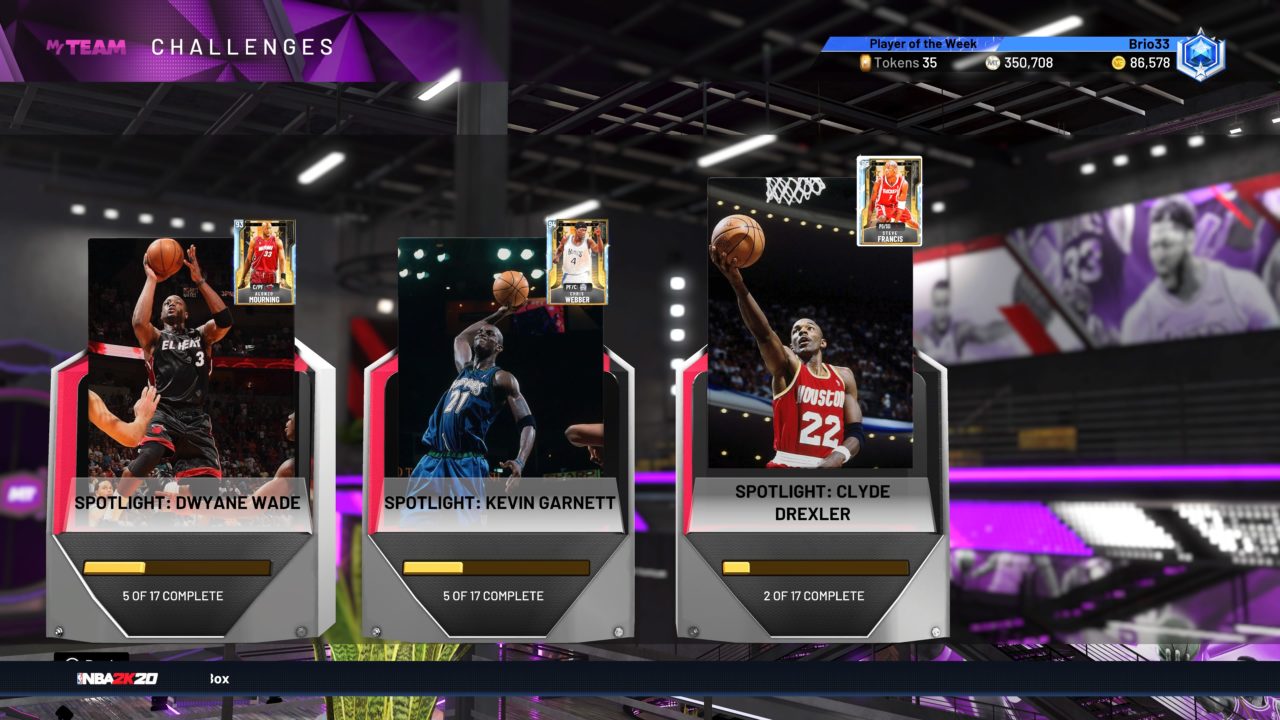 Now let’s discuss the Spotlight Challenges themselves. In a word, they’re hard. In two words, they’re too hard. For Wade and KG, I gave up after three games. (I’m not trying to get those rebounds with D-Wade.) I did, due to my dedication to the Houston Rockets, grind out the Clyde Drexler games to get diamond Steve Francis. I couldn’t even say I played those games as much as suffered through them. That weekend was literally the only decent chunk of time I’ve put into MyTeam since week one, and it wasn’t even really worth it (more on that later).

Thankfully, Twitter educated me on some ways to cheat those challenges. Thanks to Spaceward Bird2, the method I learned in this video saved my sanity. Plus he also has put together some handy spreadsheets, like this one for KG, on the requirements needed to work your way through the games. So at least now I can figure out pretty quickly whether to even start that grind or not. Mostly the answer will be no.

And the fact remains that thus far, you have to eventually buy every card in the collection to complete the challenges. That’s the definition of pay-to-win. 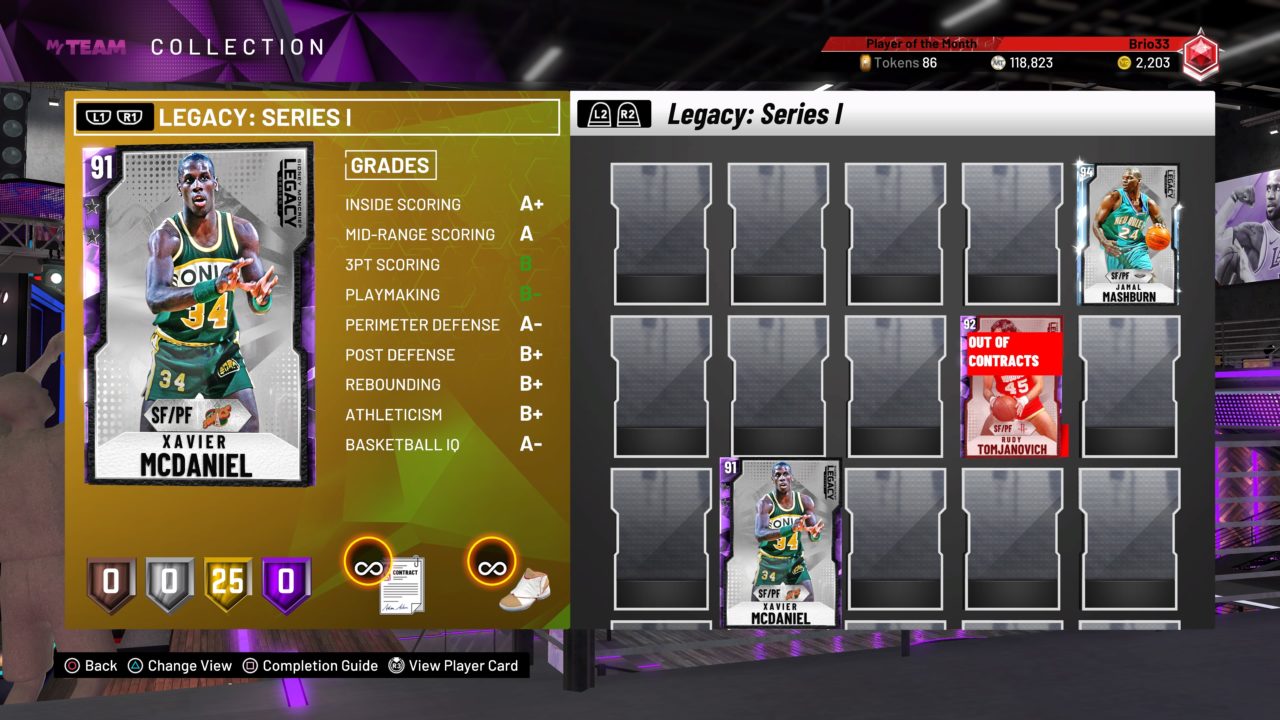 I won’t even waste space discussing the Prime or Legacy collections. They’re fairly underwhelming pieces of content. Perhaps we could get some challenges to accompany/earn those? That would be cool. Remember the Jordan Challenges from 2K11? I’d love to play some challenges that give me the opportunity to earn cards from those collections. Teach me about some of these legacy players and through that education, plus through having to work for them, I’ll care more.

It doesn’t even have to be the pink diamond (Prime) John Stockton, but maybe give me different challenges for the Prime V.I.P. cards that come with John, and then I can choose one to grind out to get a card. Maybe they’re even limited-time opportunities, like the stuff on “Today in MyTeam.” This way, I think more people would be engaged with the mode throughout the year, and engaged players have to be more likely to buy packs. Though even if they’re not, a lot of people are still going to buy just to scratch that itch.

If there were one card I would recommend so far (besides poor, poor Hondo), it’s definitely the Legacy: Series One Xavier McDaniel. I got so excited about him in fact (he will evolve to pink diamond, some day…) that I put a diamond contract and shoe on him, and decided he would be my new go-to-guy. The RPG player in me got psyched about that (for about three days), but now unfortunately he’s just collecting dust in my collection (for all of the reasons I’ve mentioned already). Scoring 1,500 points to get him to a diamond is a pretty daunting task, but when he’s on the court he’s kind of a beast even as a lowly amethyst.

I’ll save some other deep dive complaints for next time, but here’s a rapid-fire round of questions/issues to contemplate: 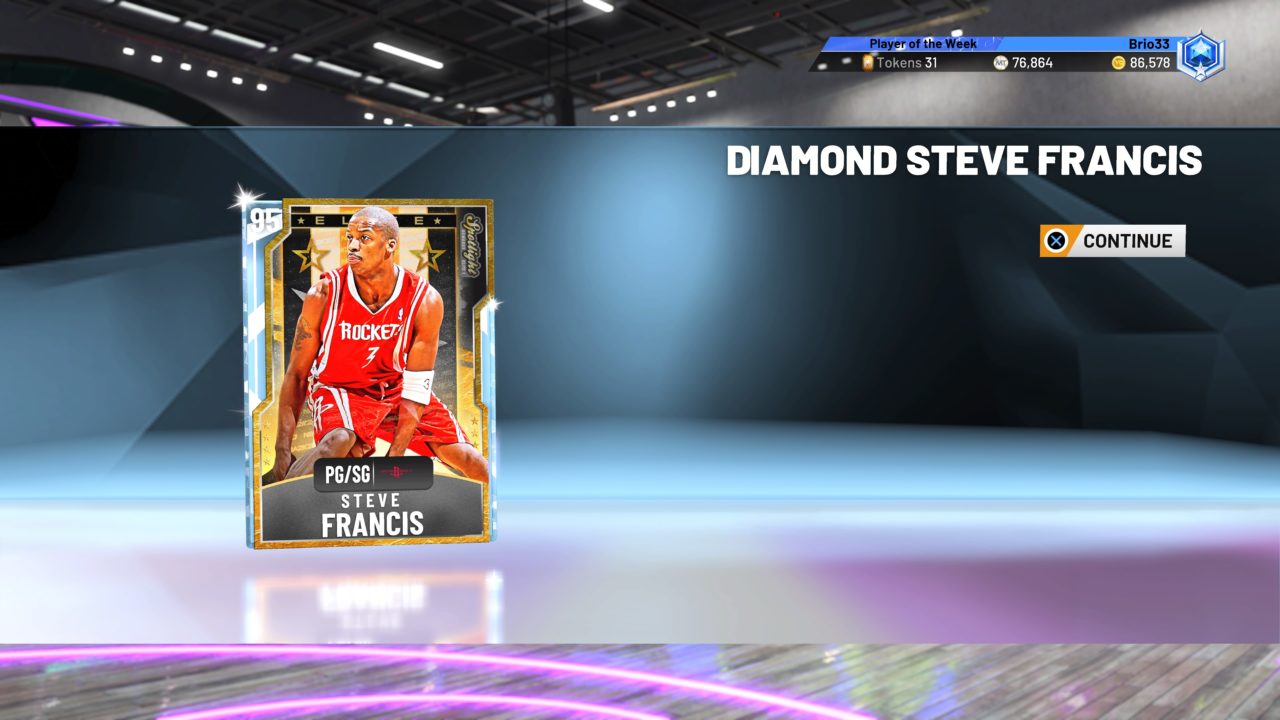 Then for the gameplay, there’s a definite learning curve. As the patches have come and gone, I’ve had a love/hate relationship with it, in particular on the defensive side of the ball. For me, if a guard or wing player doesn’t have the “Clamps” badge, I’m not interested. That’s the only way I’ve been able to have any success. (Plus I did learn some good tips from this video by Sam Pham, thank you as well, sir). But let’s circle back to the shiny diamond Steve Francis I had to bleed and sweat for to acquire. He’s not even my starting point guard. Yes, he’s a fun card to play with, but if I want to win a game, I’m running with amethyst Jason Kidd (from the collection rewards) because he can stay in front of opposing point guards. This is the one example I can think of where a reward card has any kind of long-term value to me. 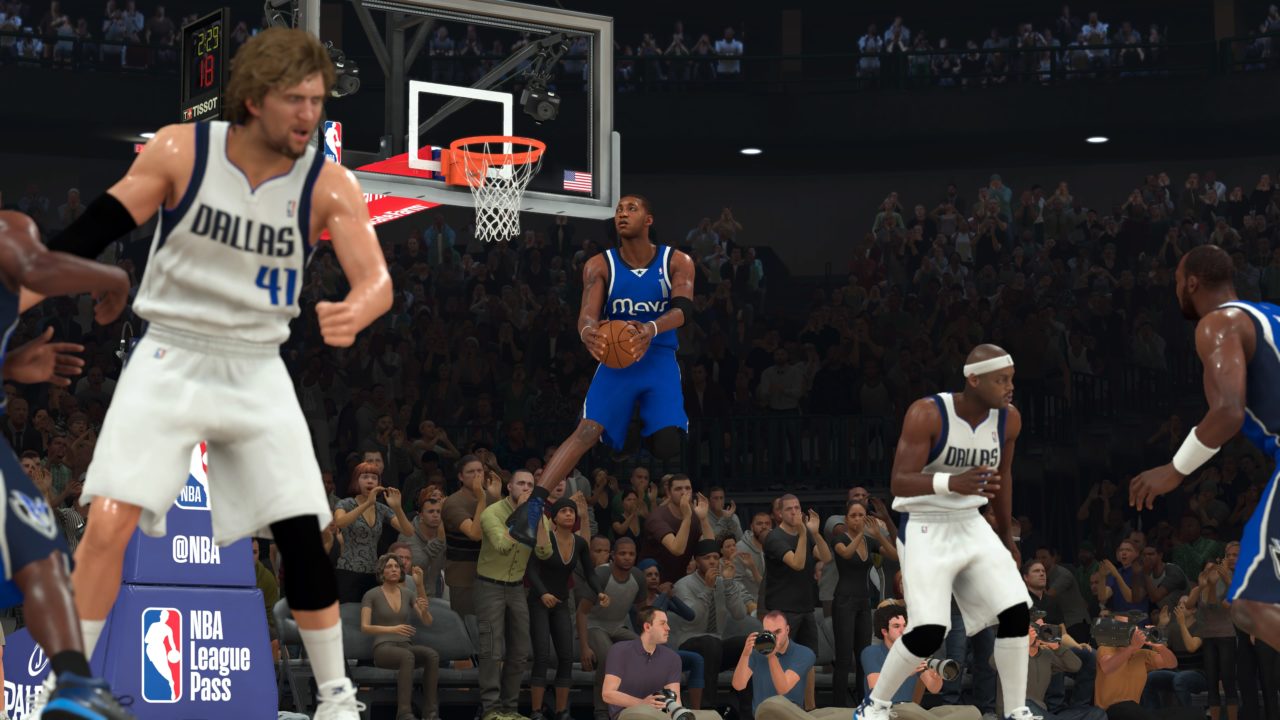 This has all definitely impacted my desire to keep coming back to play. There’s a certain childlike joy I usually get from the game, not just from playing through the mode, but also from collecting the cards. That joy is absent right now. And without that joy, I’m definitely not spending anymore money. Surely, there’s a lesson in that.

How about you all? Are you enjoying the mode? Burnt out already? What has 2K20’s MyTeam been like on your end? Let us know in the comments, and as always, thank you for reading.