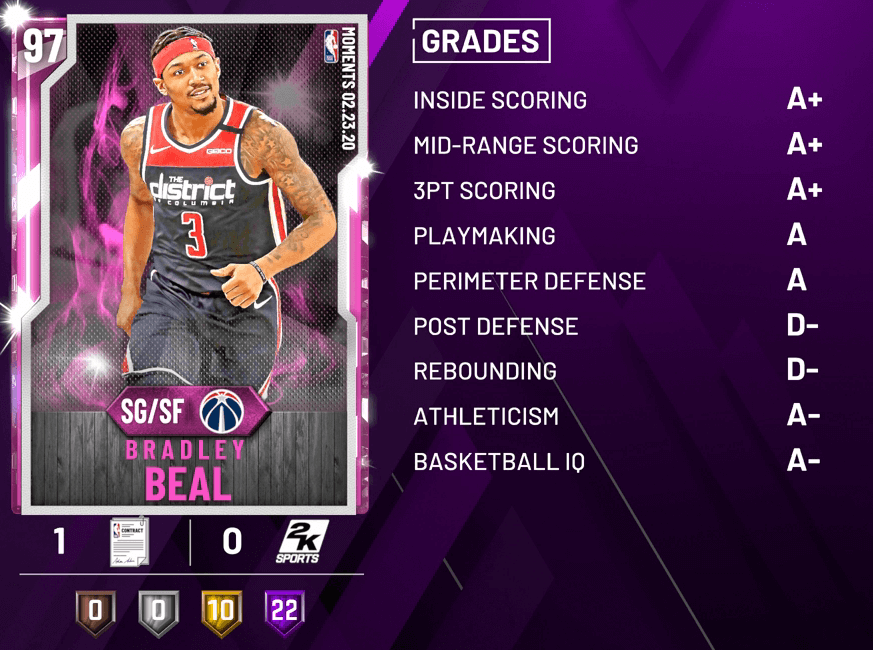 This is the first full batch of Moments card since All-Star Weekend as our last Moments drop was a single pink diamond Trae Young. In this first set of reviews, I’ll be looking at pink diamond Jayon Tatum and pink diamond Bradley Beal. In the next review, I’ll look at pink diamond C.J. McCollum and amethyst Coby White. 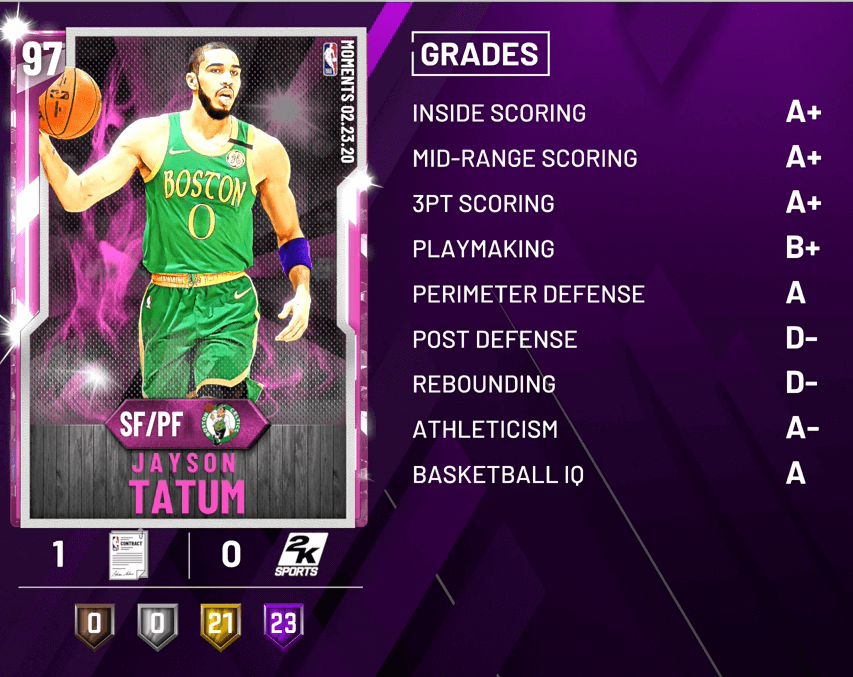 Analysis: As I said in my quick preview of Jayson Tatum, I thought he would be the most hyped card but a lot depended on his shot. I still don’t like his shot as much as I did earlier in the season, but it doesn’t feel like a detriment anymore. He does not do great in the post, so it hurts that he does not have SG eligibility this go around. Still, this is probably the most well balanced card of the four available in this batch of Moments. Tatum has received a lot of cards so I don’t think this is the “must have” version or him or anything, but it’s clearly the best version so far.

He’s held up even better than I expected dealing with some good wings, which has been the best surprise so far. He still feels a little stiff on offense, but his straight-line drive game is good, and he’s a consistent shooter at all ranges. In some ways, I almost think of him as an ultra souped up Bruce Bowen. I don’t really want him leading my offense, but I do feel good with him as a key lockdown defender and spot-up shooter.

He’s a tier below guys like Jimmy Butler and Kawhi, and I still like shooting with someone like Jaylen Brown more than Tatum, but I get the appeal of this card for those who are big Celtics fans.

Analysis: There’s no way to dodge the no Clamps thing. It’s a non-starter, and if you disagree with me then fair enough, but no Clamps means basically you can’t stop the most basic straight-line drives since those players just don’t really have access to bump animations. It makes stopping basic turbo nonsense very hard, and Beal is not so good on offense that it’s worth hiding him in a 2-3 zone every game. His diamond card was enjoyable to use, but that was back in Moments Week 4, and a lot has changed since then. The cards are just on another level now, and so a souped up version of that card just is not good enough.

He’s not an athletic freak, and while the shot is good, it’s not a top-tier release or anything like that. In a lot of ways, he’s like C.J. McCollum in terms of the cards he usually gets. He’s in this weird middle ground for two guards who don’t quite find a home in MyTeam. I think that changes somewhat with this newest McCollum, but we’ll get to him later.

For now, Beal feels locked into this realm where he’s only going to truly work in Triple Threat Online. If you really want to use Beal, just stick with the diamond for now. I also assume Beal gets another pink diamond in the near future since he scored 50-plus again, and we already have precedent for back-to-back cards after Damian Lillard did something similar this year. I won’t be shocked if that version gets Clamps, but this is all hypothetical for now.

Bottom line, this Beal is the worst card released of the four.