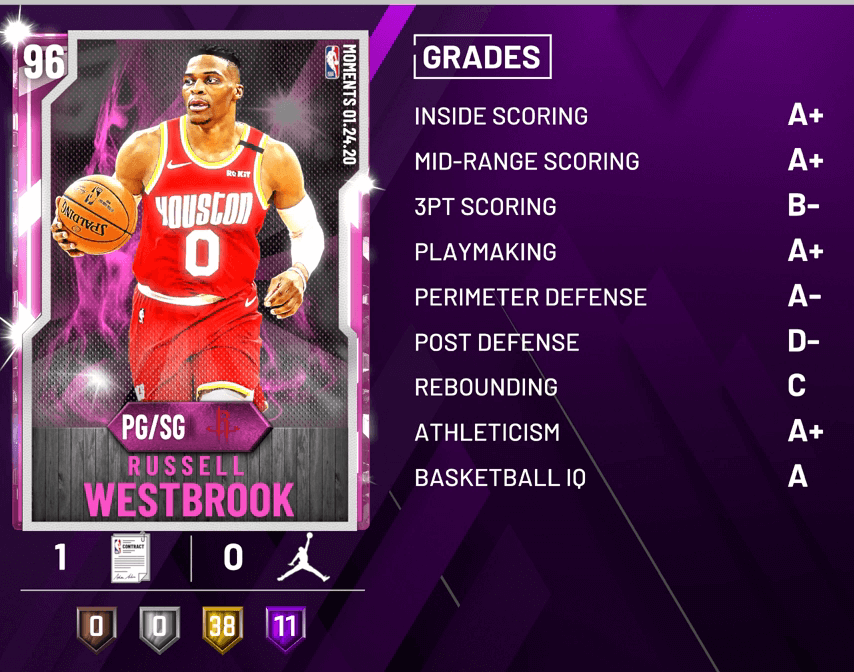 I covered all six new Moments cards in NBA 2K20 MyTeam here. It includes five pink diamonds and one diamond. If you just want the quick and dirty on those players, use that provided link. If you want a little more depth, read on. First up, we have a pink diamond Russell Westbrook review and a pink diamond Damian Lillard review.

Analysis: Look, the 3-point shooting is a non-starter. This card is not Ben Simmons and so Westbrook is not going to be at the top of the meta with a bad 3-point rating. On top of that, the card doesn’t seem like the most impressive upgrade from his diamond card. Still, this is a perfectly functional card, and he still has a relatively smooth release. Westbook also tends to play slightly above his ratings in my experience. He jams on people and just gets so many blow-bys that he’s still a force if you’re going up and down with your opponent.

He’s also going to be perfectly acceptable as a defender, which means he stands out among a lot of the other PG options in this Moments release. With HOF Quick First Step, you know what to expect from this Westbrook, and so it’s just a matter of trying to figure out a way to hunt dunks, assists and mid-range shots rather than 3-point bombs. I don’t feel the need to say much more than that because this Westbrook basically plays close to how you would expect the real Westbrook to play when he’s going right. 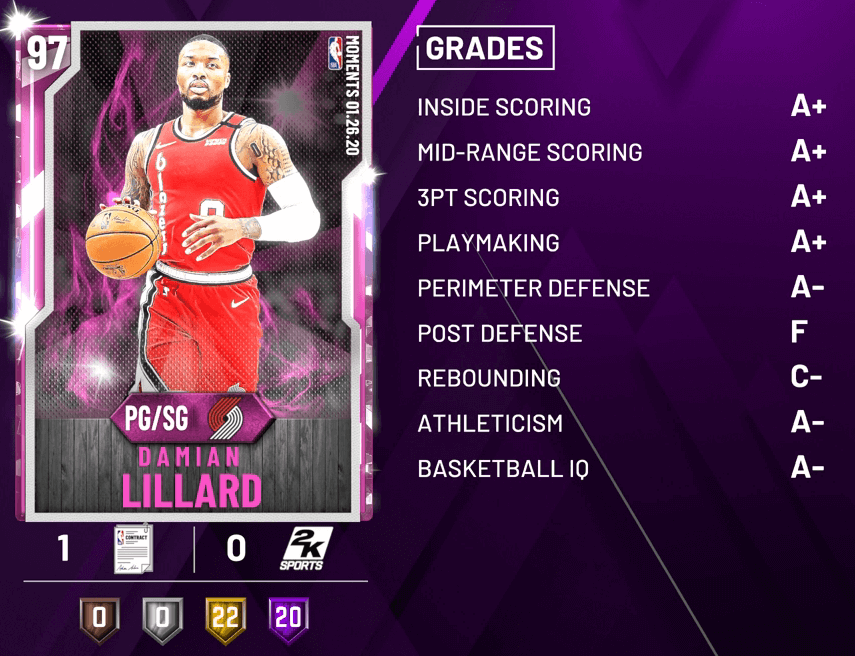 Analyis: I’ve seen some people say Damian Lillard is turning into the James Harden of NBA 2K19 — otherwise known as someone who was getting new Moments cards all the time. At this rate, they might not be wrong about that. With that in mind, I already reviewed the last pink diamond version so there’s not much new here. In comparison to that card, he gets two new HOF badges (Needle Threader, Dimer) and some other marginal boosts in playmaking.

Since there’s no need for a deeper review, I’ll add a little extra here by saying where I think Lillard stands right now in the PG power rankings within MyTeam. I would put him below Ben Simmons, Penny Hardaway, J.R. Smith and Derrick Rose without question. After that, I think he’s in the same general area as Steph Marbury, Tony Parker, James Harden, Baron Davis and Gilbert Arenas. Someone like Walt Frazier is maybe in the conversation as well if you believe more in having lockdown defense.