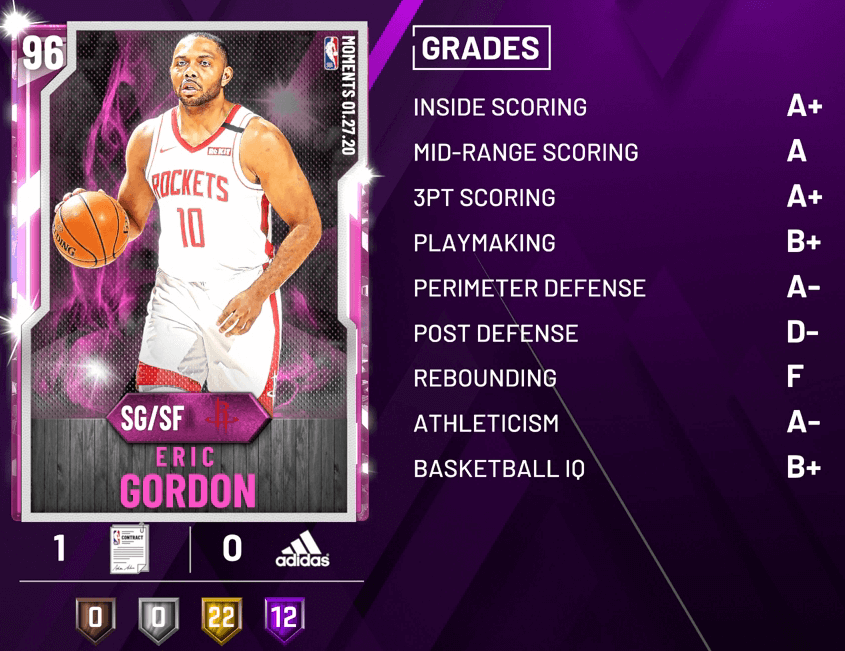 Last up with the Moments cards, we get two shooting guards who are better than all the point guards not named Damian Lillard. Read on for a pink diamond Eric Gordon review and a diamond Buddy Hield review.

Analyis: I have zero interest in using this card at SF, but it’s very nice to get the first upgraded Eric Gordon of the season. He was previously a silver, and in some other years that would not matter, but Gordon’s shot is actually usable this year. In the past, his shot has been slow and hard for me to read. The release point was never where I thought it should be, and so I always had to practice a bunch with him before using him.

His shot is still somewhat slow, but the release point makes sense now. On top of that, he’s a good enough defender to compete, and so he won’t be hunted quite like Trae or Kyrie. He’s not a lockdown defender or anything, but the point is he can survive. On top of that, his playmaking can be a factor here because he has HOF Quick First Step. You can give it to him off a screen, and he’s got enough to his game to shoot it or create something off the bounce. That’s a nice perk to have on a player you probably just need to spot up a lot of the time. He will have some issues finishing because he’s just not going to dunk much, but most of these cards in this set are imperfect in one way or another.

The other bottleneck is that he’s still mostly there to spot up. Is his shot so good that I want him as one of my main spot-up shooters? Probably not. The perk with him is he’s not stuck in just a spot-up role. However, if your offense is mostly based around a basic pick and roll at the top of the key in a four-out setup, then you won’t have a ton of use for Gordon. If your offense is a little more diverse and you split up the ball handling duties a bit more, that’s when Gordon makes some sense. 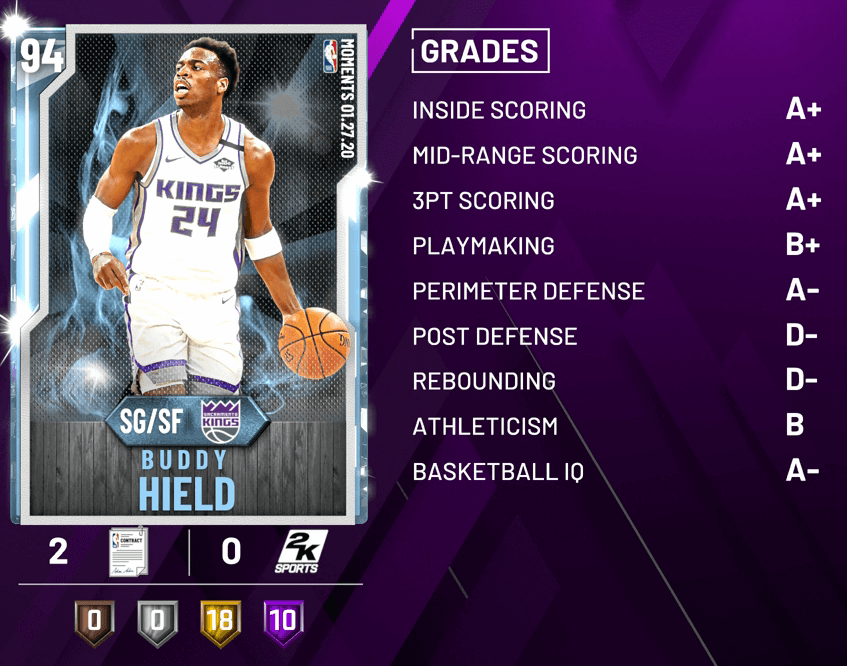 Analyis: Buddy Hield, much like Damian Lillard, has gotten his fair share of Moments this year. The thing with Hield is at least each of his cards has been at an upgraded gem tier. In this set of Moments cards, I could also argue Hield has the best shot. I trust Lillard’s shot a bit more because he feels smoother off the bounce, but from a standstill I will take Hield’s shot over all these other ones.

Buddy also has a lot of the same positive qualities of Gordon in that he’s not a total pylon on defense. Again, you’re not sending him out there to lockdown wings, but he can hold his own and then hit deep ball after deep ball on the other end. He’s got some marginal playmaking abilities, but I don’t trust him quite as much as Gordon in that space. But the most obvious appeal of Hield is he’s a diamond. He’s going to be way cheaper than these other Moments cards, and he’s easily going to be the best bang for your MT.

He’s also more “meta” than Gordon in that his role is clearly defined. He’s going to sit on the wing, catch passes and drill 3-pointers with his quick, smooth release. He is a prototypical spot-up shooter, and that’s why he’s a great budget option to look into as his price continues to fall in the coming days.