The NBA 2K20 MyTeam crew is kicking things up to the next DEFCON level with some of these recent drops, and the Moments of the Week 6 are another step in the power creep seeping into the game. This has positives and negatives, but let’s hold off on those discussions for now and dig into a deep group of players for MOTW 6.

(PS, some great jersey selections in the player portraits this week.) 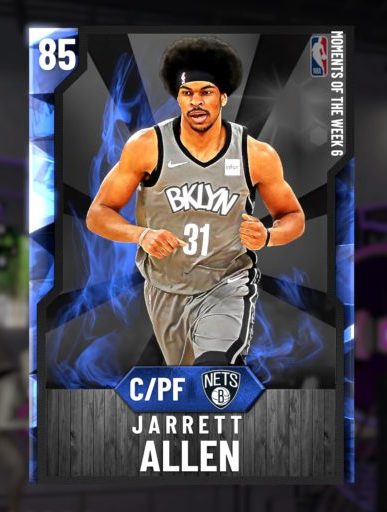 At 6-foot-11, Allen has good wingspan and his speed is actually solid for a big. I think he can have some success as a budget rim running player who plays solid defense, but I think there are so many good budget options at this emerald tier and below that it’s hard to recommend him still. 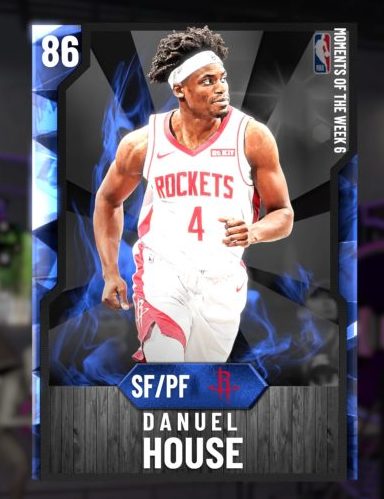 We’ve been getting a ton of emerald and ruby tier 3-and-D options in recent weeks and House adds to the list. He’s even more stuck in a role with his otherwise paltry offensive stats beyond the 3-point shooting, but if you like his shooting form, this card makes sense to use. His PF eligibility is perhaps helpful in some regards, but he’s only 6-foot-7 so it probably won’t work out too well sliding him to PF most of the time. 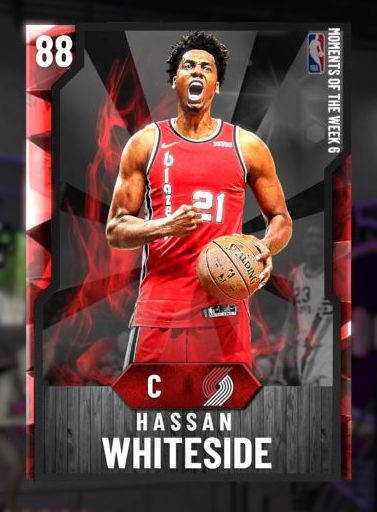 Whiteside did the thing where he gets a lot of blocks (10 in one game) and makes some people believe he’s good on D, so good on him for that trickery once again. The thing about Hassan is he’s generally way overrated in 2K games, and in this case I mean that in terms of he plays well over his ratings. In part, that’s because he usually has decent speed to go with the 7-foot frame and great wingspan. Video games also struggle to show a player whose motor goes on and off all the time, so you always get peak Whiteside, which helps as well. All in all, I bet this card is a very good ruby. 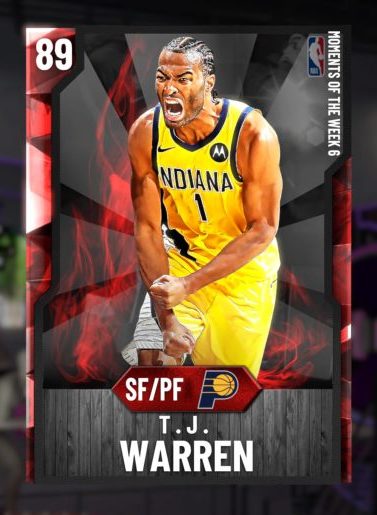 Not much that I love about this card. Warren has a decent shot release, but his shooting is not quite elite, and he can’t quite do enough off the bounce. As a 6-foot-8 player, if he were just a little faster he might be somewhat intriguing as a small-ball four, but yeah, that didn’t happen. 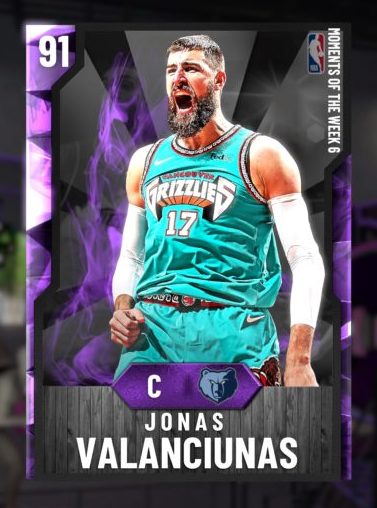 Jonas adds to the pile of solid all-around stretch fives who can play some defense. I never have much success with Valanciunas in 2K, but this one has more defense than most, and he’s going to be able to help you on defense and the boards. He does not get Quick Draw (nor should he) so the shot will be slow, but this looks like an okay card. 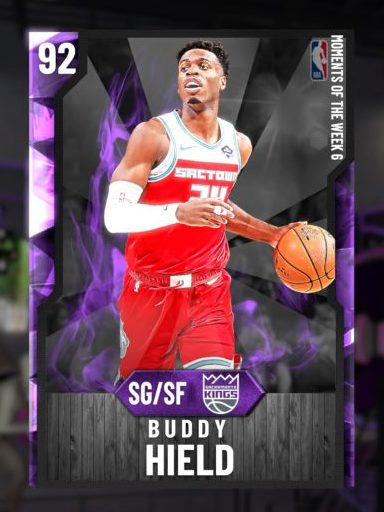 Buddy got a Moments of the Week card back in Week 4 that was a ruby, and this one has similar shooting ratings, it’s just he gets better badges now and some more athleticism. As I say with most Hield cards, his shot is generally easy to get used to, so he’ll usually play above his ratings and be someone you can’t leave on defense. I will blanket recommend most Hield cards for that reason, and this one is no different. 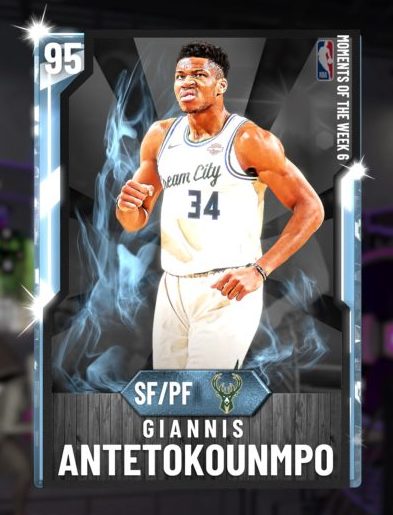 Ho hum, Giannis got another diamond. This one is not too different from the Spotlight Series Zeke Thomas one, but does get a little better dunking ratings and even more speed. He also has a +5 to 3-point shooting, which should not be overlooked. Do I really need to tell you if a Giannis card is good in 2K? Come on, you know this card is cheese. 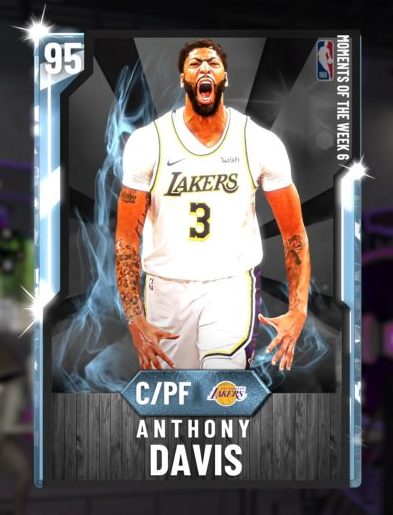 With this diamond version of AD, you’re getting considerable boosts to shooting over the original Moments AD. That is no small thing because now he’s a real threat as the stretch five, and he still has the same quality attributes elsewhere to make up for the harder closeouts. On top of that, with HOF Intimidator he remains a great anchor on the backline of a defense. This is a very good card, and it should add to the prevalence of AD already out there. 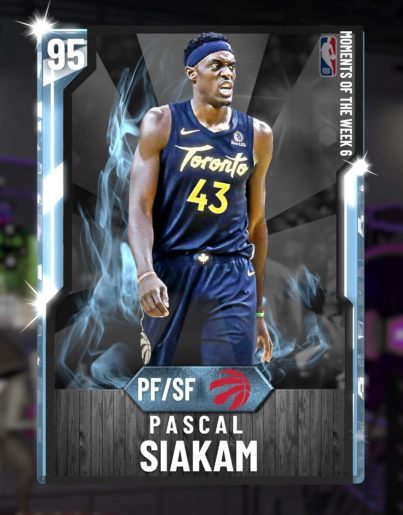 Siakam gets improved shooting over his original Moments diamond, and also oodles more HOF badges. This card is sick. It’s an actual defensive freak show, and you’re not going to have any problems running the floor with him or scoring from the perimeter. He has positional flexibility as well, so you can just maul some small forwards who end up playing up a position from shooting guard.

An amazing card, no question. 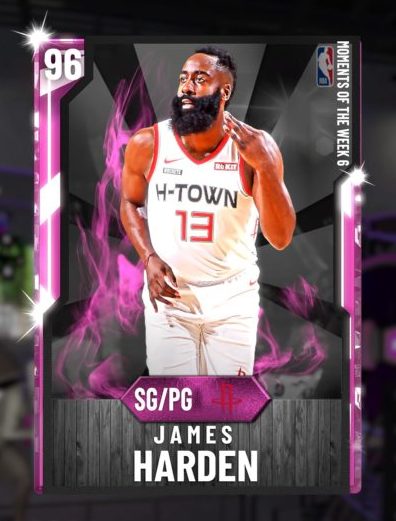 60 points in three quarters gets you pink diamond status. This is his first pink diamond of the season, and his height is also back at 6-foot-5 for this combo guard version, which is different from the 6-foot-4 diamond combo guard version from earlier this season (yeah, still don’t know what that was all about). He’s heavily tilted towards offense as any Harden card should be, but he’s not a total net-negative on defense in this version. I mean, it’s by no means who you want out there on defense, but the offensive gifts are so prodigious, you just do the standard thing and try to hide him on the easiest matchup, and then reap the benefits on offense. 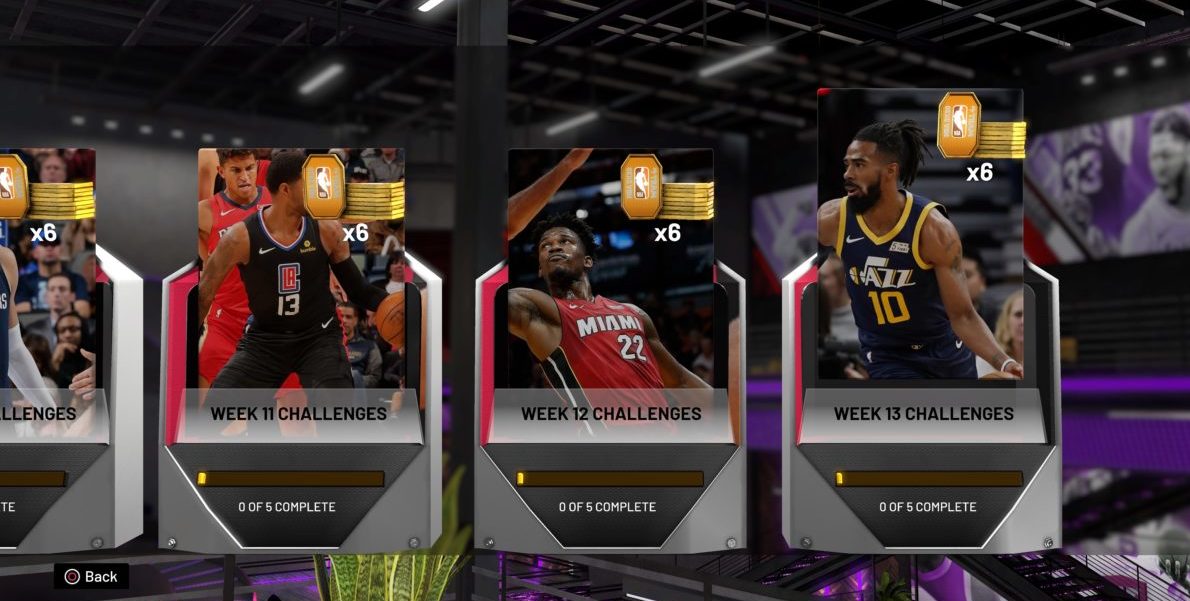 Also, a reminder that the Week 13 challenges are up for easy MT and 6 tokens.