Dynamic Duos is an old concept from MyTeam that the developers have brought back as of yesterday in NBA 2K20. There’s some confusion around these duos, in part because 2K did a bad job conveying the changes, and in part because it’s hard to find a lot of this stuff in the menus. So I just want to take a little time to talk through this change so you understand how it works today and moving forward as more duos are added.

Who Are The Duos, What Do They Do?

So, first off, 2K did deliver the full list of Dynamic Duos in the game. There are 19 duos in the game as of today, and that number will grow. A couple key things right off the bat is there is no consistency to what will upgrade and what will not in these duos, which is why 2K really dropped the ball by not giving more obvious visual cues in the game to show the changes. In addition, these duos can impact attributes and badges. 2K knows the badges aspect is a real issue, which is why they did tweet this out today:

We’ll get to this shortly, but just understand finding what badges have changed is the real headache as of now.

The easiest way to figure out if you have a player who has a Dynamic Duo is either by going to the card and flipping it to “player info” or going to 2KMTCentral where they will have a page that updates the Dynamic Duos as more are added. 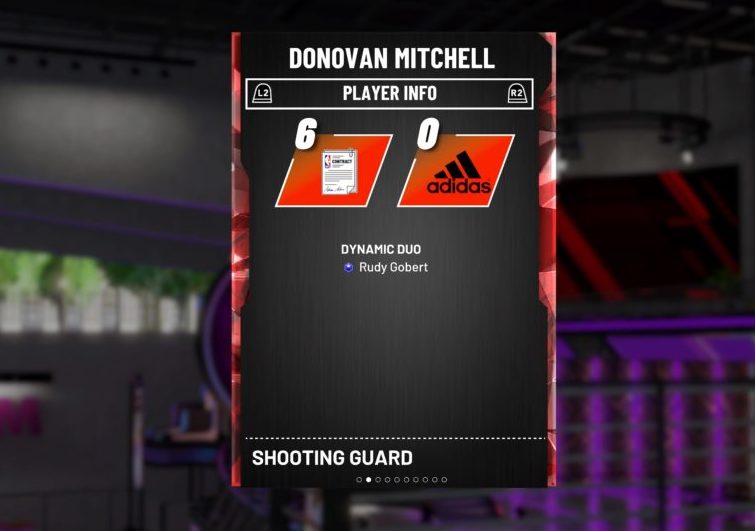 Notice the small print mentions that Donovan Mitchell’s Dynamic Duo is emerald Rudy Gobert. This information will be helpful unless a player has multiple versions of an Emerald card, in which case just go to 2KMTCentral.

Also, understand these duos are tied to specific versions of cards. You can’t put every Donovan Mitchell and Rudy Gobert together etc. to get the boosts, just the specific version called out by 2K.

How Do You Trigger The Duos?

Again, 2K was not super clear here, but the mechanic is unchanged from how it worked previously. This means you can’t just put the two players on the same team and get the boosted stats and attributes. They have to be on the court together in order to get the boosts. This gives the feature a positive and negative gameplay aspect as you may only like using one half of the Dynamic Duo.

If you look at the above picture, this adds to the confusion but don’t be thrown off by it. Donovan Mitchell and Rudy Gobert are on the same team, and so 2K shows off the pulsing arrows to show Mitchell and Gobert are upgraded. They also have changed from emerald to ruby, which is the boost they get in card tier. However, if you go into game, you will see that Mitchell only has an emerald icon next to his name when he’s on the court without Gobert.

The same goes for all the duos, hence why I showed Bam Adebayo here with Jimmy Butler to show it’s not a bug.

What Ratings And Badges Changes Happen With Duos?

This is a fair and reasonable question, but the simple answer is you’re going to just have to look and see. There is no formula for how these duos will change badges and ratings, and the badge changes can only be seen in-game right now until 2K patches it. In the meantime, we have heroes like diego2k35 over at 2KGamer putting together Google Docs with the badge alterations that have been found by the community. The list is incomplete as of today, but it’s still better than nothing. (Also it should not be our job to put this sort of stuff together anyway.)

What Dynamic Duos are worth doing and which are not is also up for debate. I would look at that Google Doc being run right now to really figure that out. The fluctuations are vast. Pink diamond Wilt Chamberlain gets +1 to defensive rebounding and that’s it when put with amethyst Billy Cunningham.

Then you have amethyst Ray Allen, who becomes a diamond with three extra HOF shooting badges when teamed with ruby LeBron James. In that same relationship, LeBron James gets no new badges and only gets +4 to 3-point shooting as the main upgrade. So, again, even within the duo there are wild fluctuations. 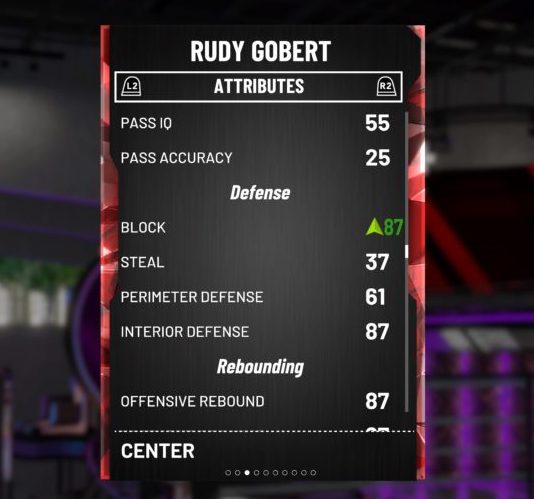 Small note, but this is still bad UI by the 2K team. It’s great that the upgraded stat shows in green, but I also want to know what the original rating was at the same time to see how big an upgrade this actually is. As has previously been mentioned, you will have to go into an actual game to see the badge changes. Right now, even in the lineups menu of MyTeam, you will see the same badges: 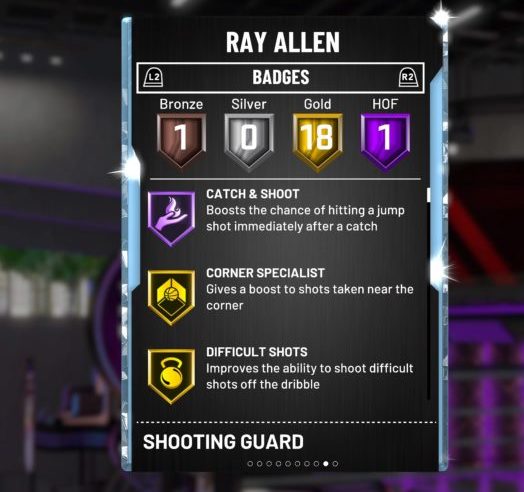 This Ray Allen card is showing as a diamond (so he’s been upgraded from amethyst), but he still has one HOF badge here. You can see the same badges in-game. Below you see Allen’s shooting badges when LeBron is not on the court: 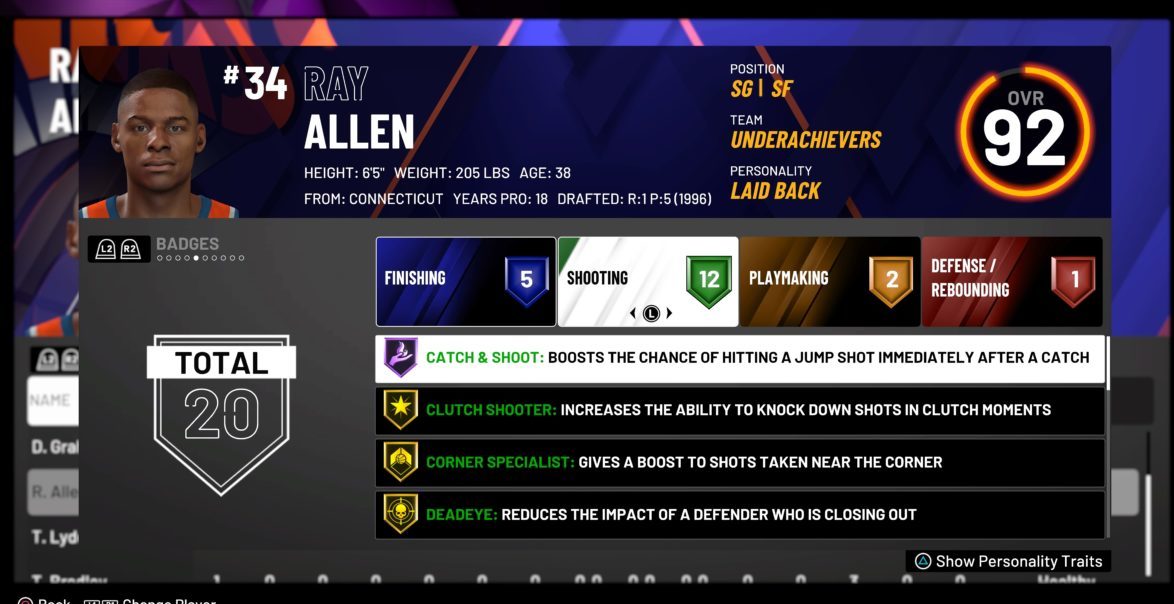 They are the same as in the lineups menu.

And then here are Allen’s upgraded shooting badges when LeBron James is on the court:

As you can see, he gets HOF Clutch Shooter, Corner Specialist and Range Extender when activated with LeBron on the court. I say again though, it’s fine that I just see the upgraded badges in-game because I should not have to use this menu anyway in-game, but in the lineups menu of MyTeam it should clearly show me what badges have changed in the duo. I should not have to memorize what the original badges were to see what changed.

If you want to access these badges in-game, you go to the player stats screen, click R3 to open the attributes menu, then you page over to the Badges tab to scroll through what’s different.

But Seriously, What Duos Should I Use?

Okay, gosh. By no means have I looked at every single one, but if we’re just going by pure value, I think some stand out so far. I’ve already mentioned Ray Allen and LeBron James, and I think that’s an easy sell since LeBron is awesome even as a Ruby, and Ray Allen becomes one of the best shooters in the game with the added HOF badges.

Using Live Paul George and Kawhi Leonard together also seems like an easy sell. Live cards don’t get as many badges as some of the special cards, but George and Kawhi get a whole batch of gold badges and are solid players to use in any form as well.

Following the same line of thinking, Donovan Mitchell and Rudy Gobert are another duo to consider. Mitchell and Gobert both go to ruby, and each get some gold badge upgrades.