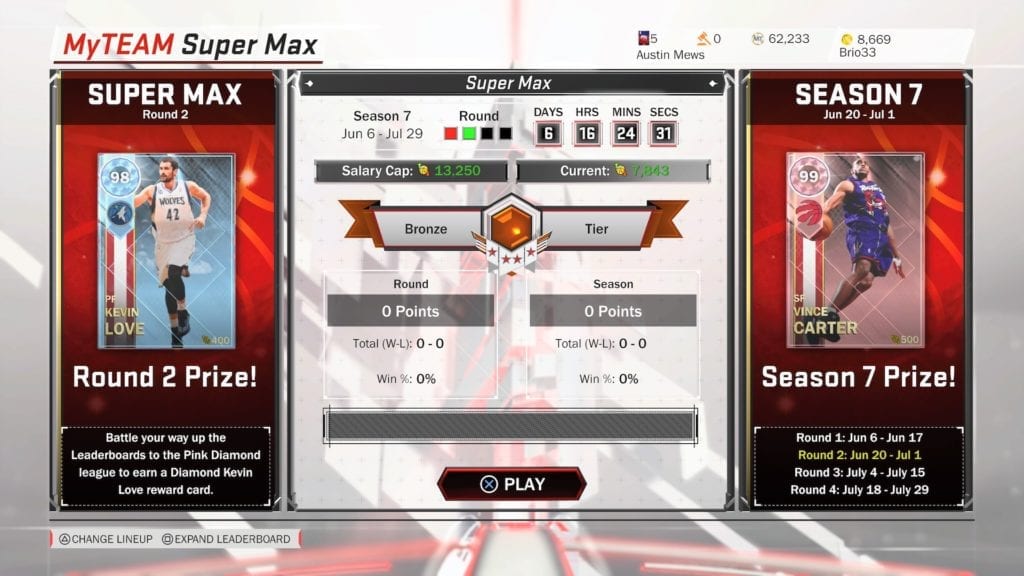 If you’re still playing Super Max in 2K18, good luck on the road to diamond Kevin Love and pink diamond Vince Carter. Both are cards I would like to have, but as has been my feeling on the subject of Super Max this entire year — the end doesn’t justify the means.

This brings me to my first suggestion for Super Max (and MyTeam in general) in 2K19: we need better rewards.

It seemed like all year the rewards were undersized ruby/amethyst point guards or power forwards — and mostly players I didn’t really care about. So, perhaps it might be possible to let us pick from a few different card options, much like with Domination?

Or, maybe in addition to a final reward, what if as you win games to move up the ladder, you could choose a card that your opponent is using and take it? That would certainly add some drama. Maybe even you could choose which opponent to play based on what card he/she is wagering? That would probably be a great way for players to self-regulate game difficulty levels.

But either way, there needs to be more cards, or at least better MT, being earned along the way.

Speaking of difficulty, it seems silly that there aren’t different tiers of Super Max. A “Bronze Tier” could be games where you can only use bronze players. Or a “Ruby” tier is rubies and lower only, etc.

Or, at least do a better job of implementing the salary cap.

For example, maybe if you use multiple diamond cards there is an extra fee, and that fee multiplies the more diamonds you use. Basically what I’d be hoping to accomplish here is that technically if you wanted to use three diamonds you could, but then you could only afford bronze rookie players to fill out that roster. You know, kind of like in the real NBA (minus the Warriors — and yes, as a Rockets fan I’m still bitter weeks later). But maybe this would add a little more strategy to lineup creation.

And then if people wanted to run all pink diamonds, they could still do that in the pre-season.

Finally, the whole ‘losing points for losing games’ thing is just garbage. If the goal is to raise the stakes of games, there are other/better ways (like my card wagering idea), but punishing people for losing (or being kicked or glitched out of games) is awful. A loss should net me SOME points just so I don’t feel like I’m wasting my time, ya know?

It might still theoretically take me forever to move up to the pink diamond tier if I lose 4 out of every 5 games, and even with the length of the rounds themselves I might not make it at all. So it’s not like everyone and their mother will be able to earn a ruby George McGinnis, if that’s even what 2K is worried about. Which I doubt.

Okay, so what do you guys think? Love Super Max? Hate it? What would you change or improve going forward?

And wow, can you believe I wrote a whole article about Super Max and never once mentioned the server issues? I think that means I’m growing as a person.

NBA 2K19 MyTeam Wishlist: Domination
Which Top Rookies Will Have the Biggest Impact in NBA 2K19?