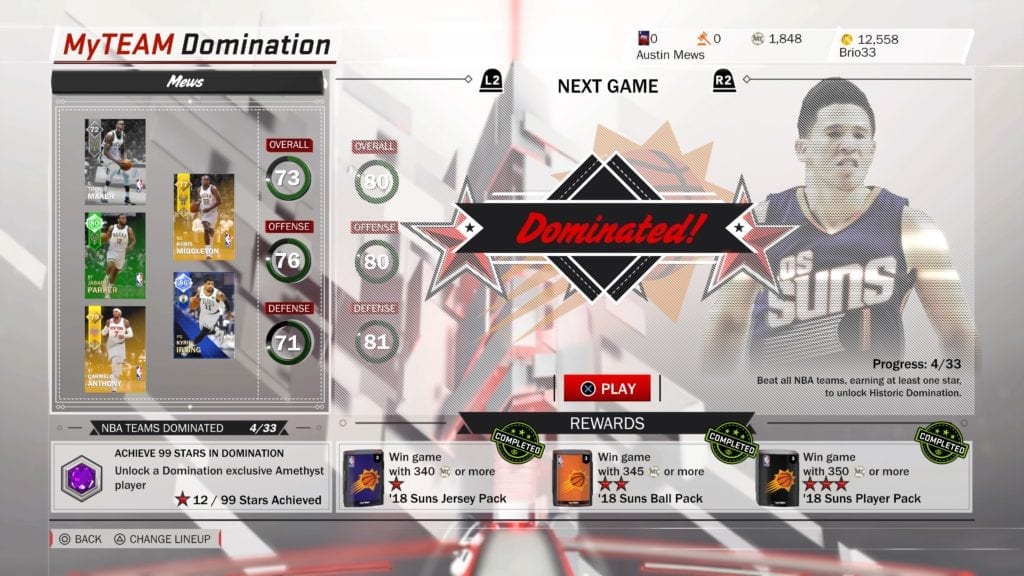 Over the coming weeks, I’d like to dive deeper into some of MyTeam’s current modes, offering my thoughts about what works and what doesn’t, and most importantly giving you all a chance to throw out any ideas you may have.

First up, my favorite mode: Domination.

This is the mode that seduced me into MyTeam a few years back, and it’s definitely seen some improvements. Adding Historic and All-Time Domination specifically has been wonderful, but there’s always room to grow. A few months back I threw out some general ideas, but I think they’re worth revisiting and elaborating on here.

Mainly I just want Domination to be longer, and actually, I think it should potentially go on forever.

What if, after you beat All-Time Domination, it gives you an option to run it back. The new round still would utilize the all-time players, but now there’s a fantasy draft to mix and match everyone over the 30 teams. It could also incorporate new cards that have been added as the year progresses, like the Super Max rewards and one-hit wonders like pink diamond Lonzo Ball. Basically it could take the best version of each player currently available, and make that the draft pool.

This could give us more options to earn MT (or contracts, strategy cards, etc.) throughout the year, all at our own pace. And the difficulty would increase each time to play it, which would also increase the potential MT. And let’s face it, harder teams are only fair because our own squads get better and better each week too. Like right now, in June, I have an awesome team with a bunch of diamonds — and essentially no good reason to waste contracts and utilize it.

In my dream version, there would also be a playoffs to work through, and it could even track stats. Give us MT rewards for winning MVP, or scoring champ or whatever. Or maybe whoever we win MVP with, we automatically get their highest-rated card in our collection. Then if you win the championship, the rewards are insane, but if you lose, you get nothing and it resets back to the beginning where another fantasy draft awaits to start a new “season.” Basically I want to see a mini version of MyLeague, but with higher stakes.

Or, why not give us a way to make our own round of domination?

We could choose our own teams to play against, utilizing cards that are currently available in the mode. And based on the cards we choose, the computer would assign MT (or maybe even card) rewards. And to keep it fair, there could be a salary cap like Super Max. Then it would be really cool if we could share these online so other people could try “my” domination, and vice versa.

Maybe we could even put up some of our cards as rewards. For example, I create a domination where my pink diamond Harden is the reward. You download it, and grind through the 30 teams I’ve chosen/curated. Any MT you earn, I receive, and then at the end you get the card. It could be a different way to sell cards, but more importantly, it could be a way for someone who doesn’t have a bunch of MT to earn their way to a particular card without dealing with the auction house.

Then what could make this really interesting is that some cards (like the PD Lonzo I mentioned earlier, or a collection reward like diamond Dirk/Dr. J) could be “sold” this way, and only this way. And it would be up to me to figure out how difficult the challenge is, which would determine how much MT I’m earning. But if it’s too difficult and the reward isn’t worth it, then no one will download it, so there’s a fine line there. And multiple people can attempt it at once, but only whoever beats all the teams first will get the card. So I’m earning MT the whole time anyone is playing it up until the point someone beats it. If you crate the perfect challenge with just the right amount of difficulty that a bunch of people want to grind, you could potentially earn a lot of MT. But if you don’t, and hardly anyone plays, you could basically give away a great card if you’re not careful.

I know I would have a lot of fun trying to create these kind of gauntlets. More importantly, the community wouldn’t be as dependent on 2K to create content for us to play, particularly later in the year when we’ve got rare and amazing cards that we don’t need anymore.

What do you guys think? What do you love about Domination currently, and how would you improve it?