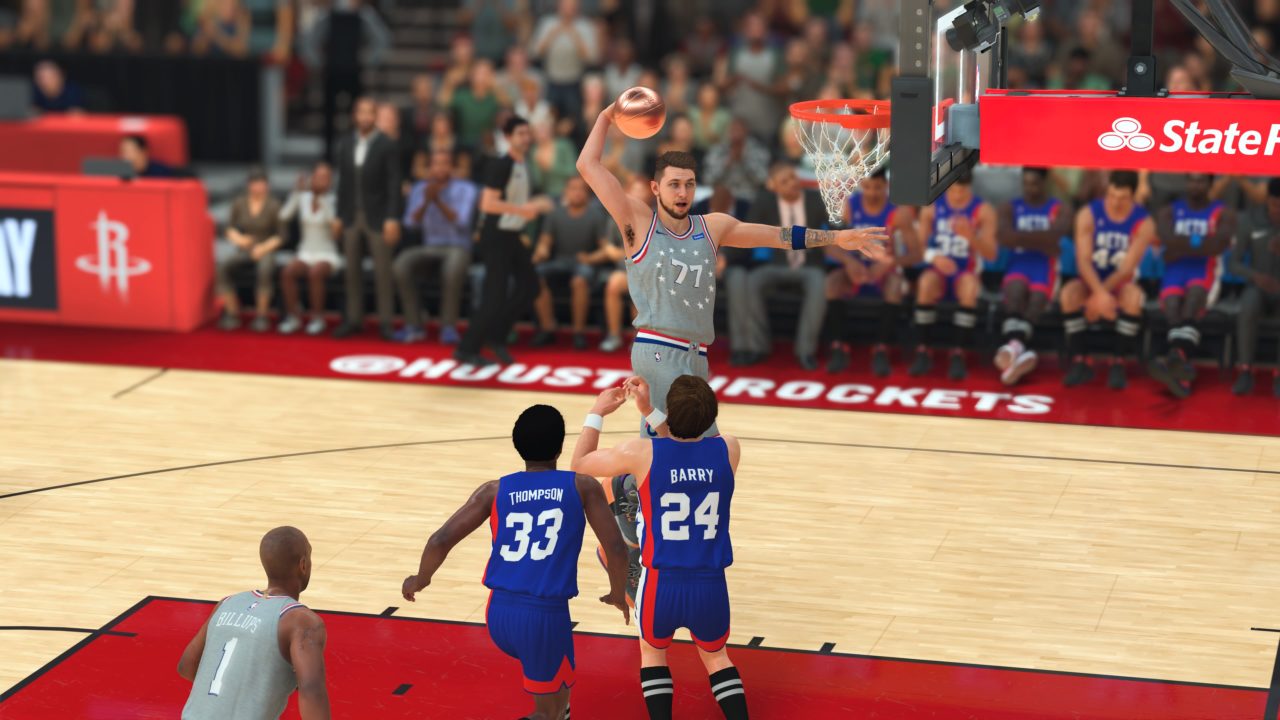 I’m not 100 percent sure what exactly a “galaxy opal” is, but they’re taking over MyTeam. 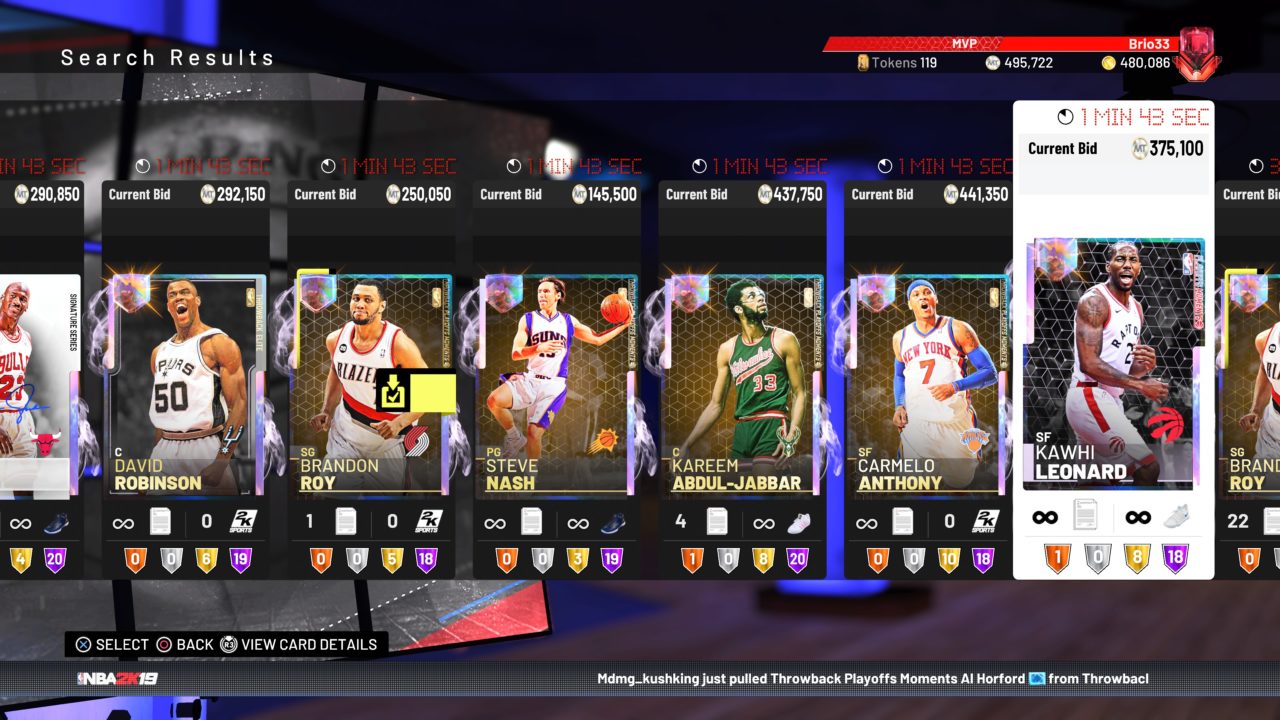 There are so many options now, between the rewards and what we can get in packs. Unfortunately none of them are BIN yet, but you can still get a GO card for 100K or so if you strike at the right time. That Steve Nash, especially, seems to be getting cheaper by the day, and the card looks stacked. 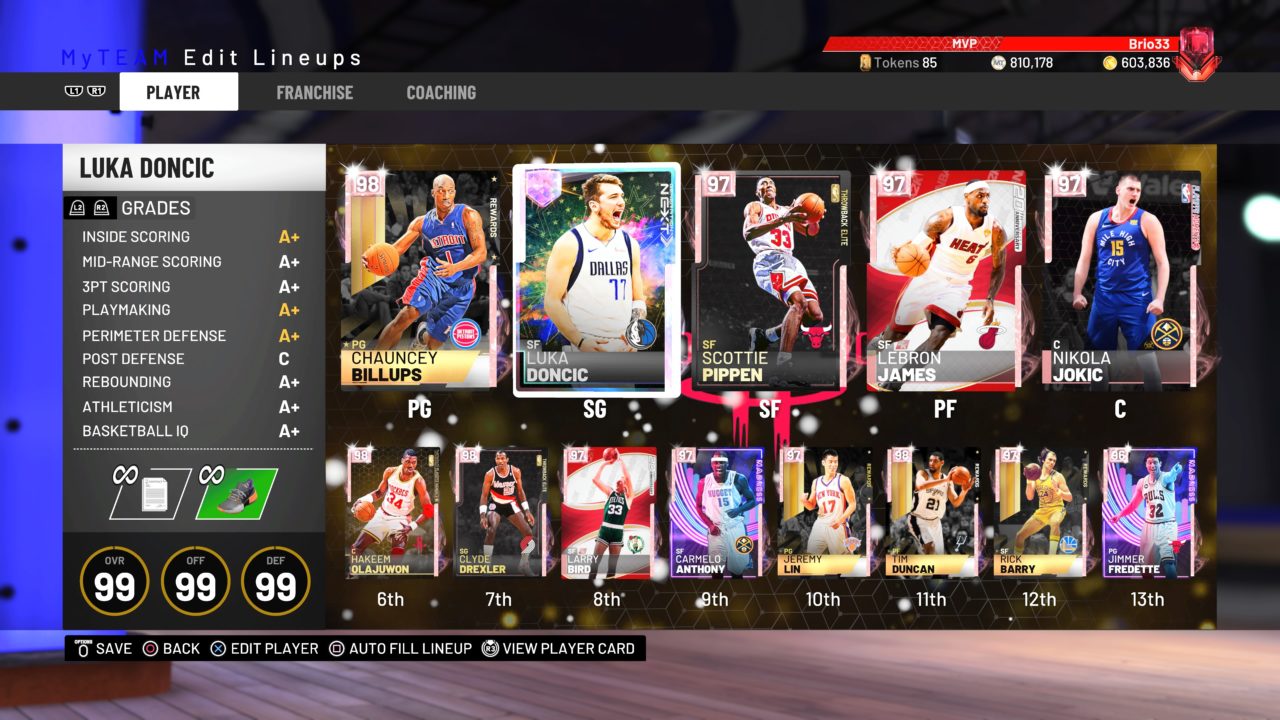 That being said, here’s my squad:

Yeah, I cashed in all my chips for Luka, and I’m glad I did because I bought him for 600K and now he’s going for nearly 900K. I don’t think I’ll be selling him anytime soon though, because he’s amazing. I’m not a huge “Giannis or LeBron at point guard” kind of guy, but Luka is definitely my new point god (sorry CP3).

But when I say I cashed in my chips, I mean I got rid of EVERYTHING. I reached the 100,000 MT card collecting reward tier and decided to cut bait for the year. 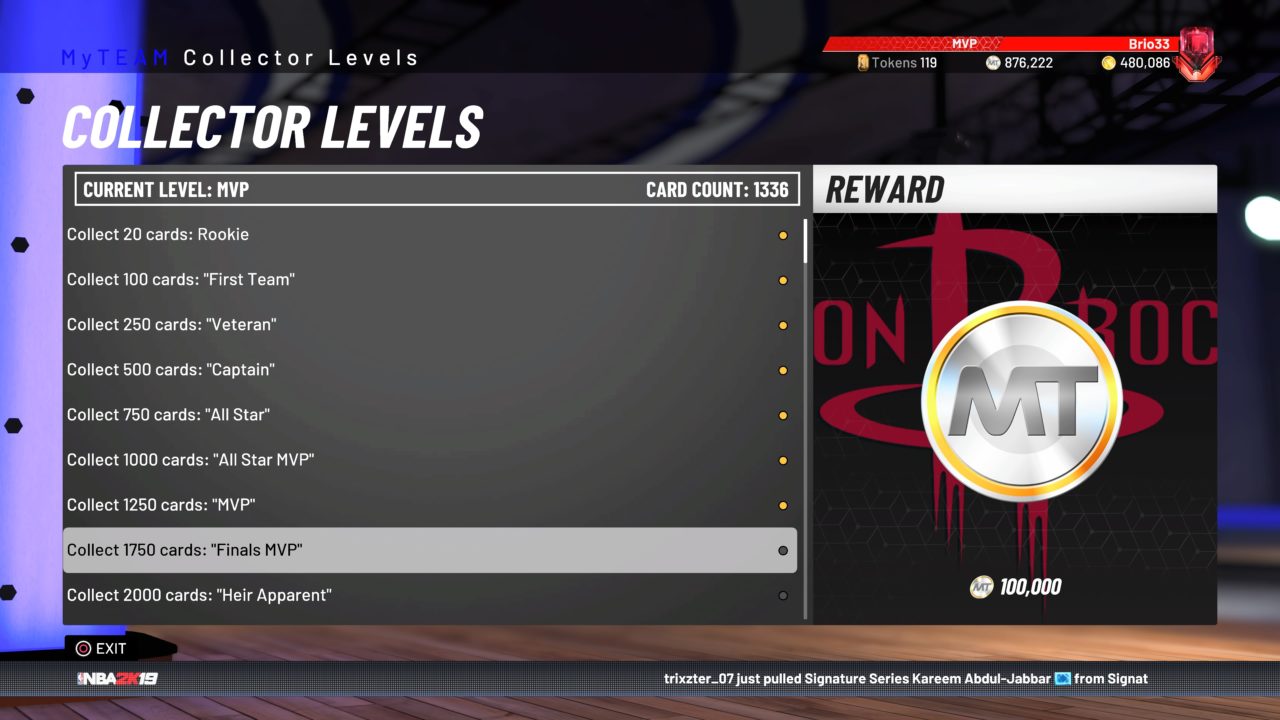 As you can see, I’ve already dropped down a tier, but the MT I’ve made from selling cards plus quick-selling jerseys, arenas, etc has been great so far. And I’ve still got more to purge.

I could easily afford another opal even after getting Luka, but I don’t know if I want to. Part of me just wants to stick with Luka, surround him with pink diamond specialists and call it a day. Then maybe I’ll use the rest of my MT to just open packs the rest of the year and see what happens. (Because I REALLY have to stop being tempted by VC sales…)

But what about galaxy opal Kevin McHale? 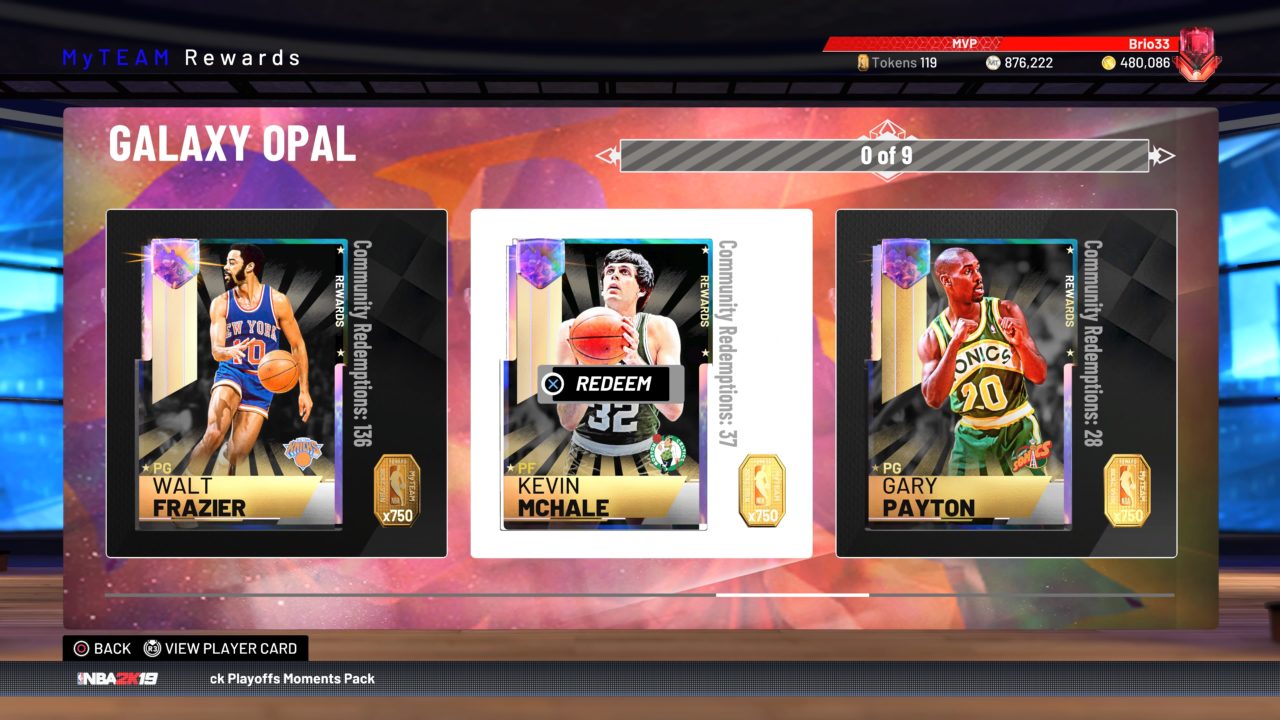 Yeah, they updated the reward market again (check it out, there’s some good stuff), and seeing as technically Kevin is associated with the Rockets (ex-coach), I want to add him to my squad.

However, since he’s a reward card, I need an a** load of tokens.

I literally just bought my fifth pink diamond reward card yesterday (Chauncey Billups, who is awesome) to open up the galaxy opal tier, but now I need to come up with 750 more tokens to get McHale. I don’t think I’ll ever achieve this goal — 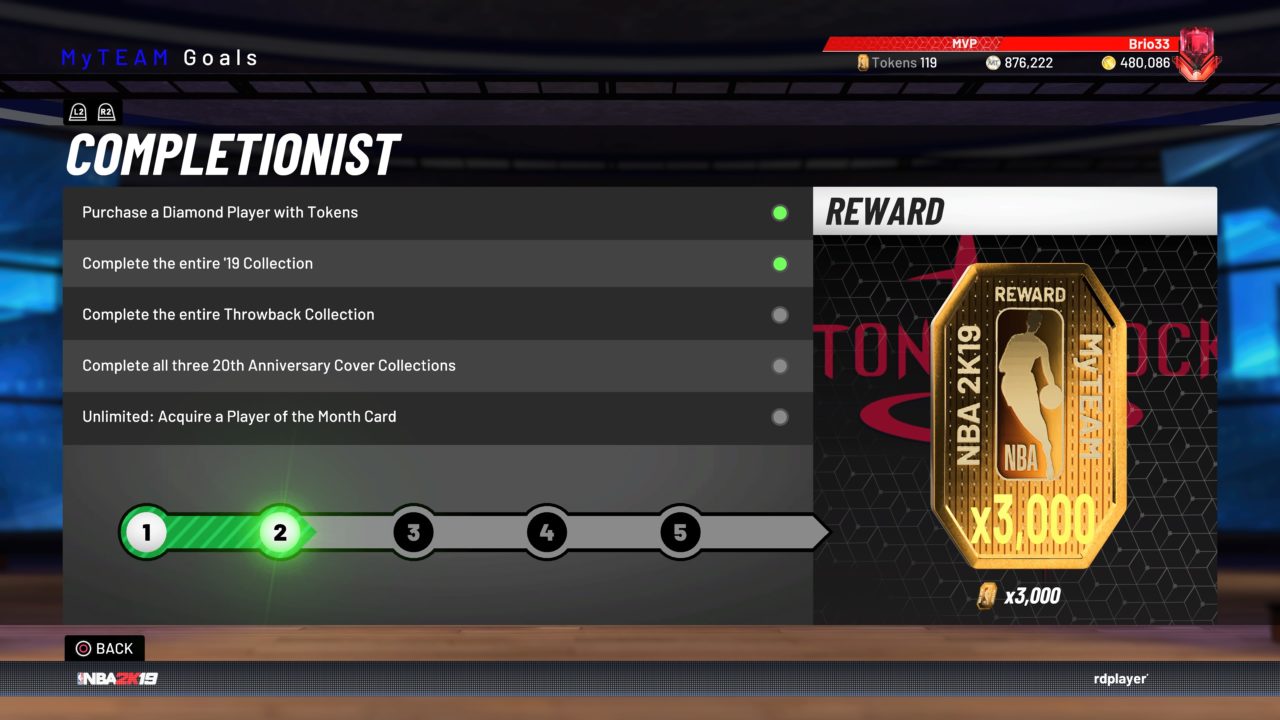 Or, maybe we can get some freaking locker codes or Moments Challenges to earn tokens! So 2K, if you’re listening, please please please don’t skimp on the codes or challenges. New cards are great, but we need new reasons to play, too. I’m almost done with Domination, and Schedule Mode is kind of useless now so there’s not a lot left.

I was actually working through the Atlanta Hawks schedule to try and get that free agent Al Horford card (a player I’ve always liked in 2K), but just today (of the date I’m writing this) an actual Throwback Playoff Al was dropped. He’s only a diamond, but he has great Hall of Fame badges and I picked him up for less than 10K MT. So yeah, like I said, Schedule Mode is useless at worst, and obsolete at best.

Is there maybe a way we could get new Schedule Challenges? Or a new tier of Domination, but with better rewards? Or at least a Moments Challenge with a huge token payout!? That would be a spectacular NBA Finals surprise, 2K.

But I’ll end this post with a few more pictures of new cards, just in case you’ve missed anything: 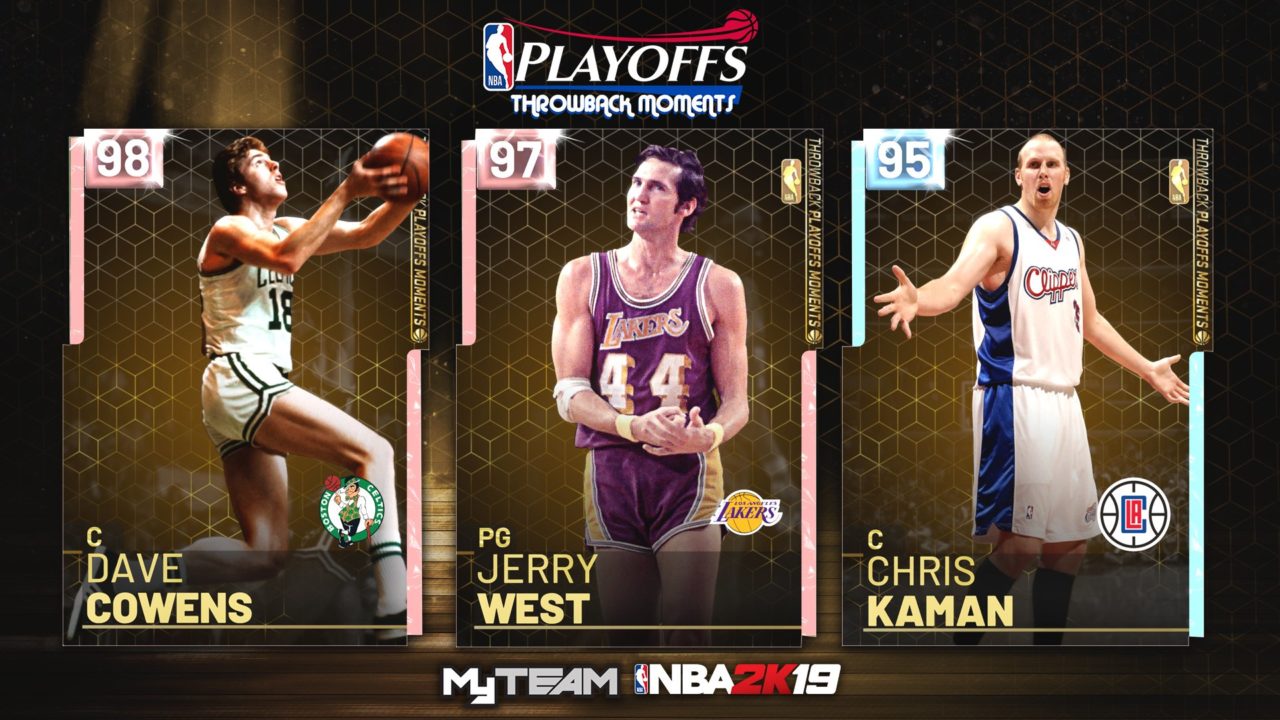 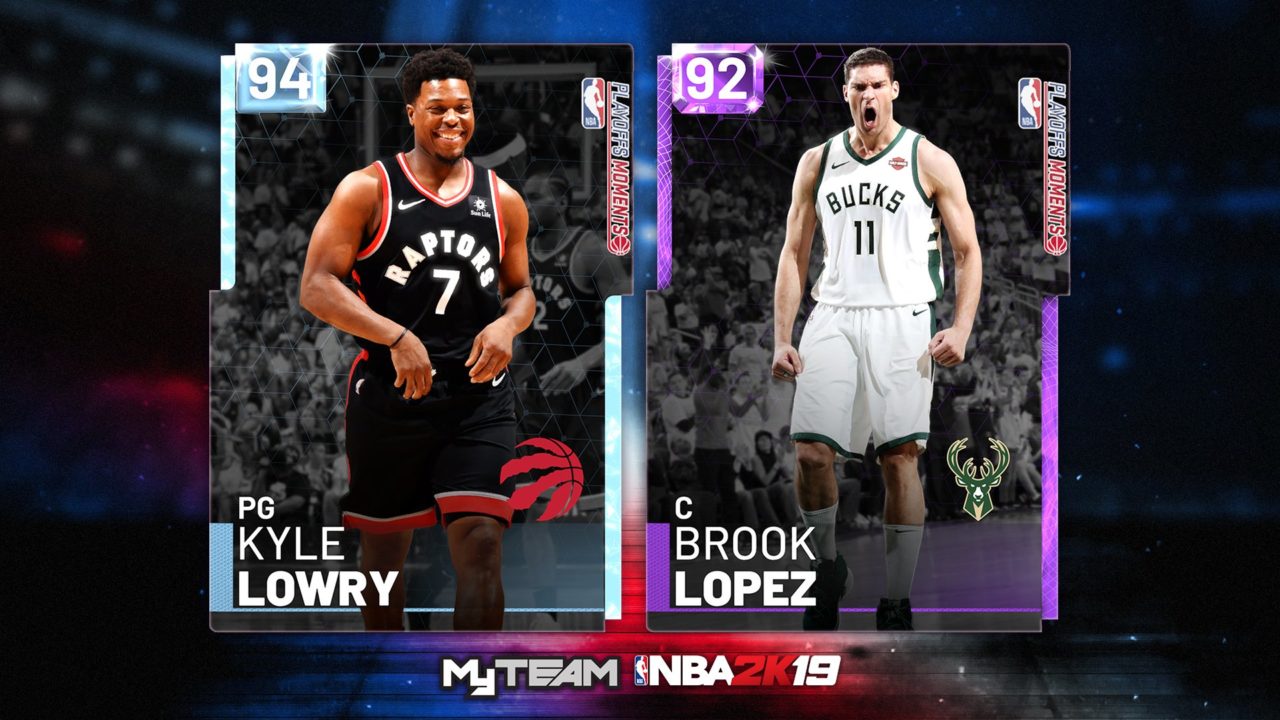 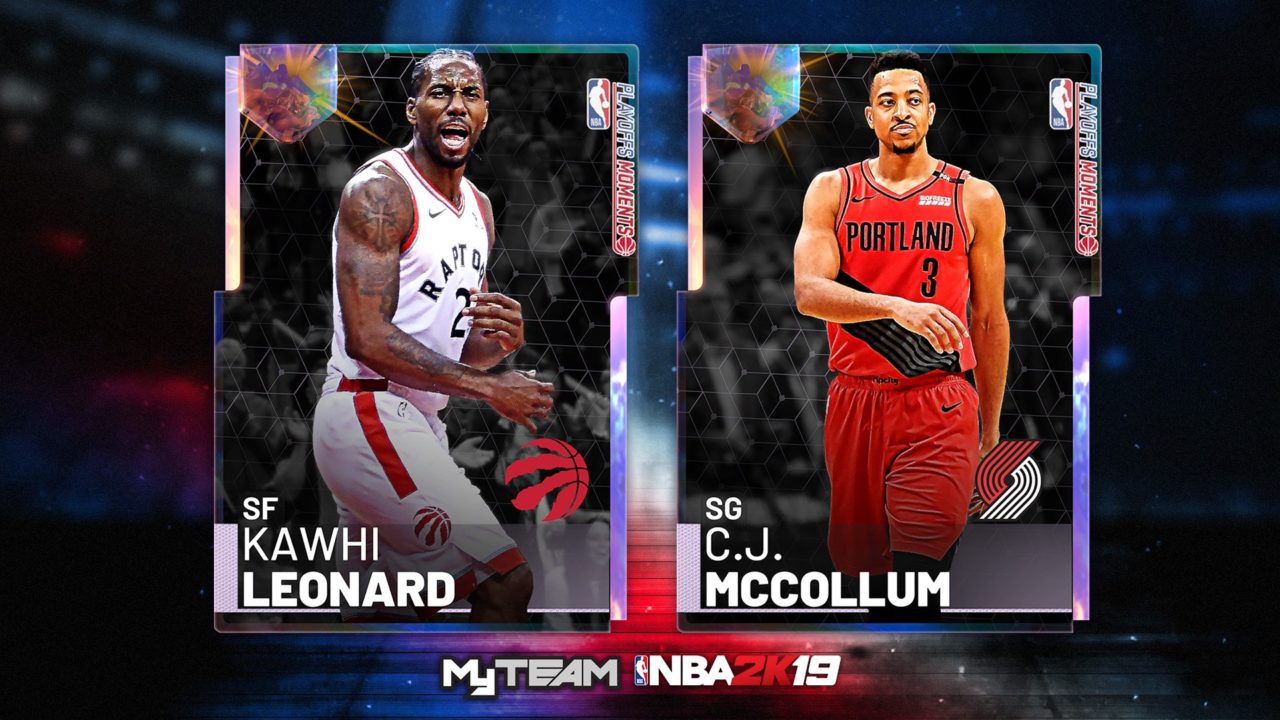 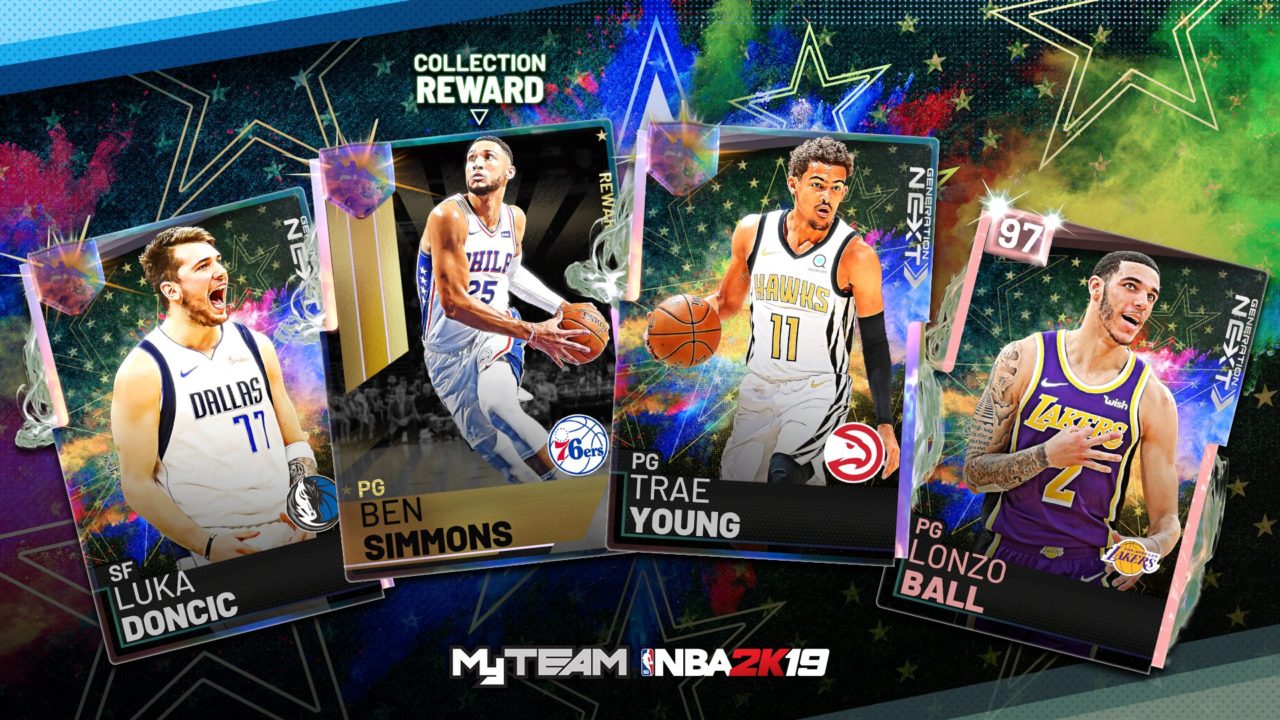 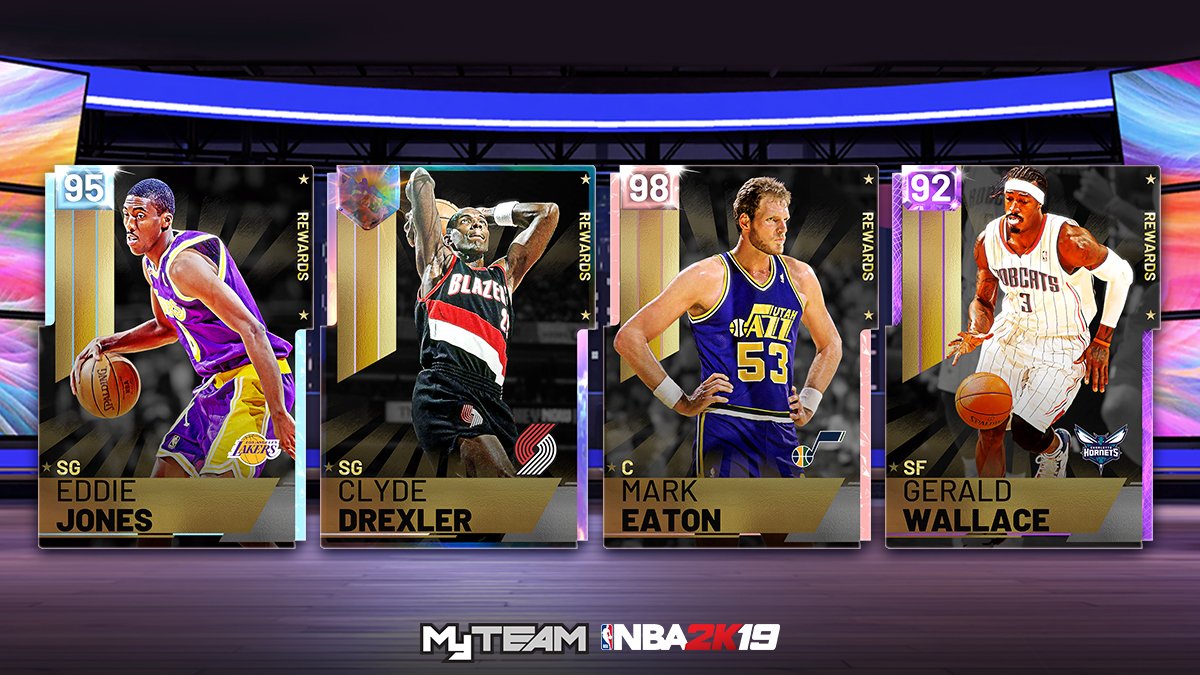 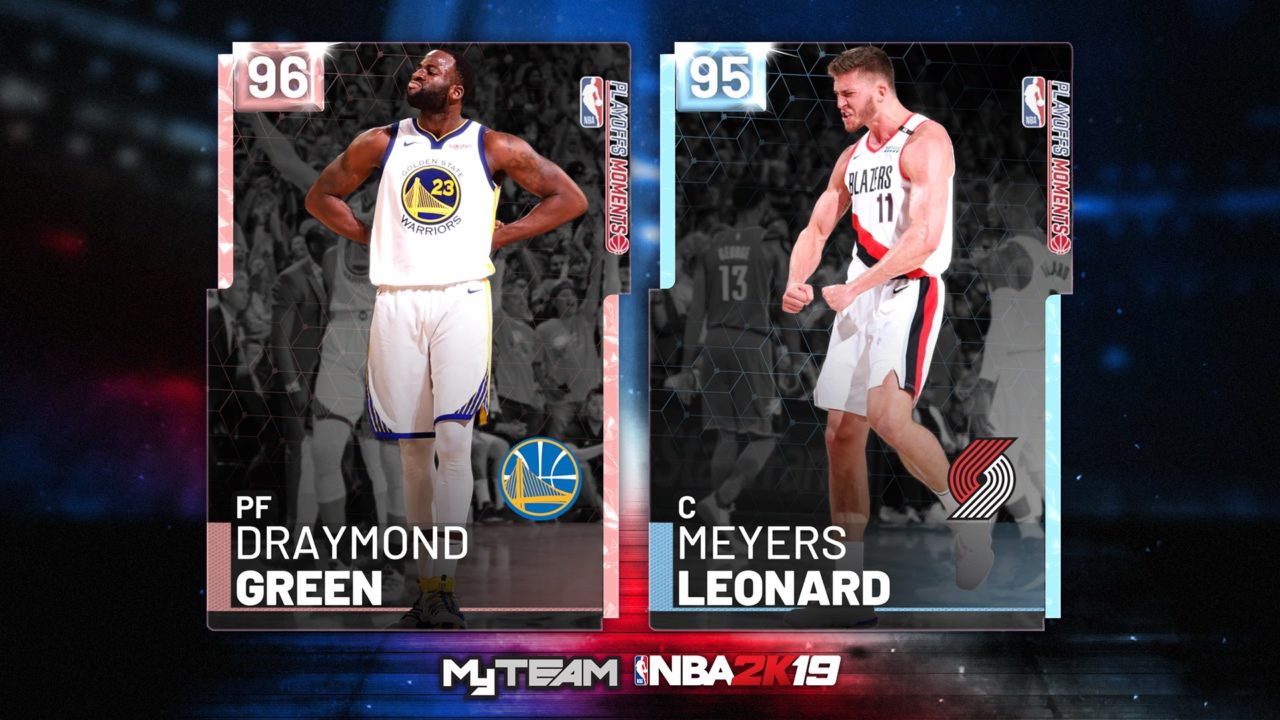 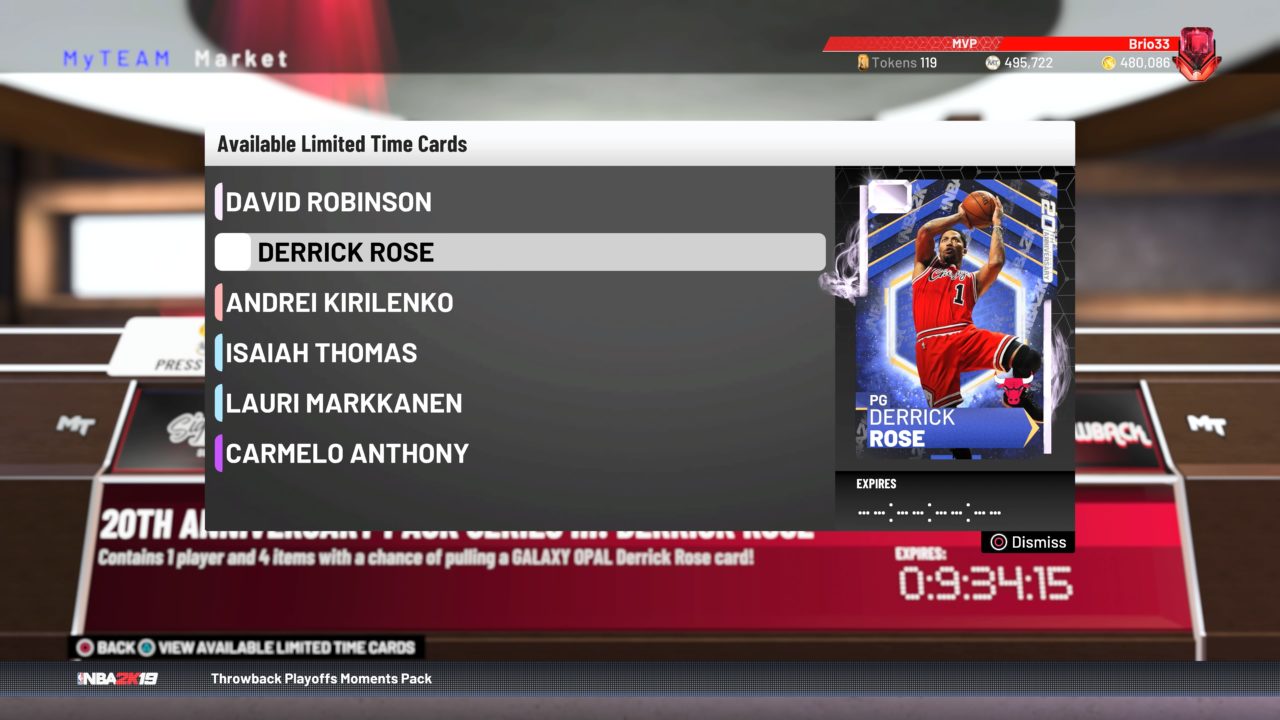 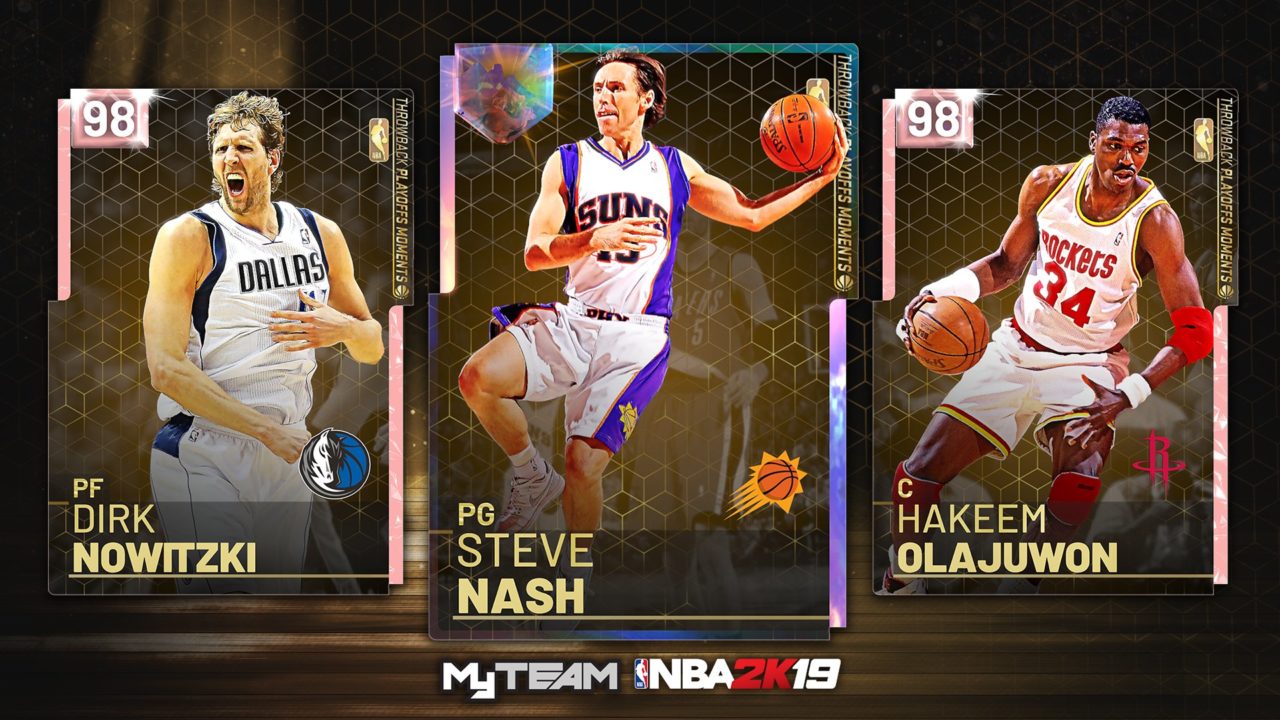 No surprises here, but my favorite of all of these cards that I’ve tried thus far is The Dream! What about you?