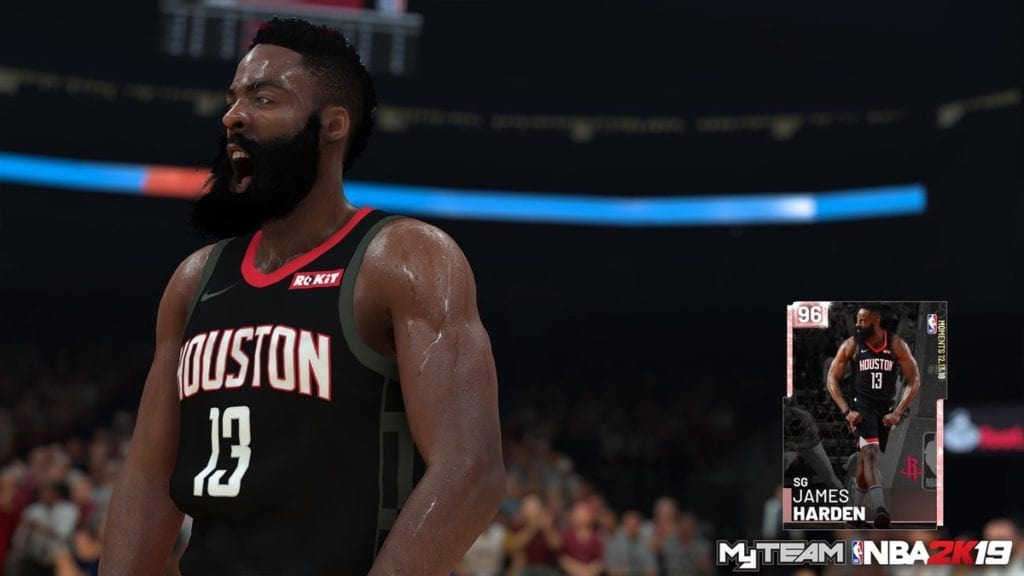 Let’s chat Moments cards for a minute. After all, 2K shook up the marketplace this week by doing a 24-hour re-release of every Moments card that has come out this year.

So the pink diamond James Harden that 2K released for his 50 point triple double against the Lakers looked, on the surface, to be awesome, especially with the photo they pulled for it. Freaking epic. But under the hood, the card doesn’t appear to be any better than the diamond that came out previously. And in some respects, actually, it’s worse.

Let’s start with that 3 point rating.

The PD has an open shot 3 rating of 78, which is actually worse than the already-skewed rating (80) of his base card! The diamond Moments card has an 86 open shot 3, which is less than his rating on the actual game rosters. Now, before someone brings up the fact that in the game in question where Harden earned the PD, he shot 4-for-12 from downtown, and that since it’s a “moment” it should be realistic, let me say this:

Shouldn’t that be what Heat Check cards are for? Aren’t they supposedly updated more frequently to account for such game-to-game changes? That was my understanding.

Plus, Moments cards seem to work like last year, in that average players who have a great performance start off with a sapphire or a ruby Moment, but then they’ll be upgraded to an amethyst or diamond if they have multiple great performances. And those cards get better across the board instead of reflecting super-accurate stats from the game they played.

Superstars obviously are a bit different, but basically what I’m saying is that it seems like Harden’s PD card should be noticeably better than the diamond and amethyst to make it worth opening packs for in the first place.

People were spending 300K or more on that pink diamond when they could get the diamond for like 70K and actually have a card with vastly better 3-point shooting. The pink diamond shouldn’t be punished because Harden shot 4 for 12. We know he’s a great 3-point shooter and will typically shoot better than that, but someone who ends up with the card will be shackled by that 78 rating.

And don’t get me started on the badges.

Both the diamond and pink diamond have nearly identical gold badges, and both share the hall of fame Tireless Scorer badge (which is silly). The LeBron Moments cards have similar issues, including the Tireless Scorer hall of fame nonsense. And I’ve already discussed how the Durant Moments Card has 3-point issues. If I had to guess, I’d say 2K is doing this because they know both players will end up with more Moments cards — plus 20th Anniversary cards down the line — and they want us to buy VC for those. I’d also say that’s pretty bad.

Okay, rant over. Let’s move on to the 20th Anniversary Giannis Antetokounmpo packs.

I opened a few and got absolutely nothing, which was especially disappointing because they are quite expensive. Perusing the internet revealed that I wasn’t the only one with bad luck, and that sounds like it’s been the norm with all of the Anniversary Packs.

Are you as excited as I am for the upcoming Michael Jordan packs!?!? *sarcasm alert* Fool me once…

Now I’m just making an educated guess here, but I think it’s probable that this Friday we’ll see the MJ Anniversary Packs. Last year around Christmas brought the Epic Kobe Crash of 2017, and I’m sure 2K wants to bring out a big gun again this year. Or, I could possibly see them doing another Signature Series player going into the holiday weekend. Either way, there will be a VC sale of some kind alongside an enticing card drop to get all of us suckers to open our wallets.

I actually don’t care for Jordan cards in 2K. I just don’t like playing with him for whatever reason. So I won’t be buying packs, but, I am preparing for the market crash by selling everything that isn’t nailed to the floor. I have a Christmas wish list of cards I want to pick up at bargain bin prices, and I know that if they do drop a pink diamond MJ, people will be throwing cards away to try and afford more packs.

I, for example, just sold my diamond Clyde Drexler for 85K because I know within my heart of hearts that I’ll be able to buy him back for less MT, with a nice diamond shoe or contract. No one (besides me) will care about Clyde the Glide when they’re trying to get His Airness. And that is sad. 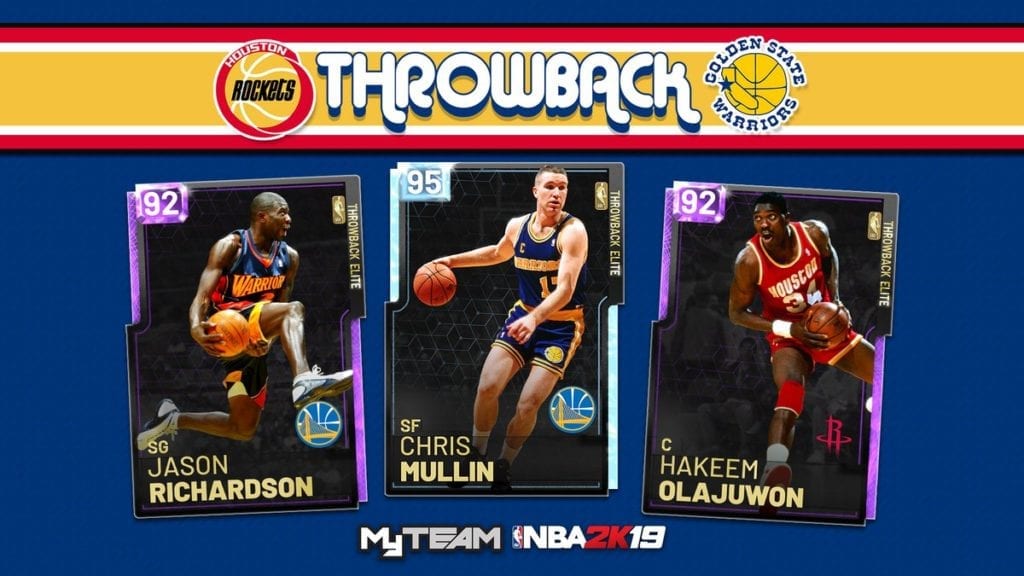 Speaking of sadness and speaking of Rockets, the current Throwback lineup features the Warriors and the aforementioned Rockets, but I didn’t get the diamond Cuttino Mobley I was wishing for in a previous post. Instead, I got essentially the same ruby as last year, plus some other guys I don’t really care about. Scottie? I Love him, but already have his ruby. Shane Battier? His amethyst card is fantastic, so the emerald does nothing for me. Yes, there is a Yao, but we all know Yao will be getting an awesome diamond at some point. Perhaps he’ll even get his own Signature series drop, or more likely another Chinese New Year drop.

Then, as you can see from the picture above, the Elite cards from this set are obviously favoring the Warriors. There better be a diamond Tracy McGrady or Calvin Murphy next time to make up for that. Maybe it’ll even be a diamond Yao. Now, I love The Dream as much as the next Rockets fan, but his amethyst can’t hold a candle to my pink diamond Moses Malone. So I won’t be spending MT on that. 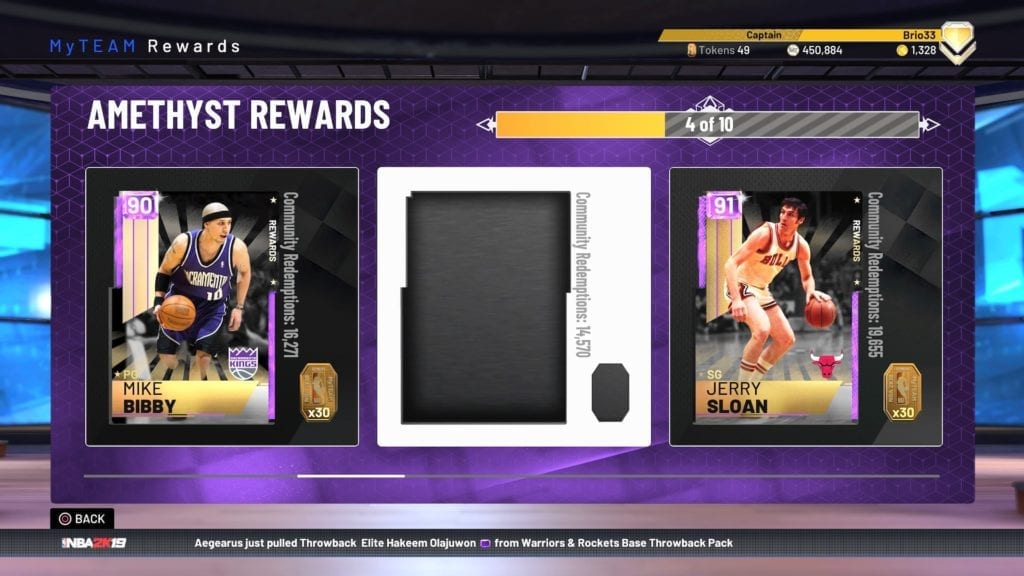 I’ll wrap up this post with an update on my reward token cards. I’ve completed a couple of Heat Check sets (Why does my Heat Check LBJ never get hot?), plus I got lucky with a couple of locker code ball drops, so I’ve moved nearly halfway into the amethyst tier. I’m super happy to finally have my Rudy Tomjanovich, but I have to say the Dirk is kind of disappointing. Junior Bridgeman has been a pleasant surprise, though.

It just seems silly to grind tokens for players who are already obsolete, as I can get amethyst Moments cards or Throwback Elite cards for much less work right now. (The amethyst Jimmy Butler and Draymond Green are still beastly, by the way.) But, I just don’t see myself earning enough tokens to buy all the diamonds, or to even unlock the pink diamond tier. I’m hoping at some point they’ll add more galaxy opal cards that will be end-game amazing, which is why I’m even trying to keep up, but right now, I’m just a little burnt out.

I know. I know. I’ve said that before, and then within a week (or sooner) 2K inevitably will drop a card that gets me all hot and bothered again. Maybe this Christmas will see one, or multiple, of those kind of cards. If they do go with Michael Jordan Anniversary Packs, a diamond Pippen or Elvin Hayes (Wizards edition, to keep the MJ connection) would probably do the trick. Hint hint…

Either way, Happy Holidays everyone and I’ll see you on the other side!