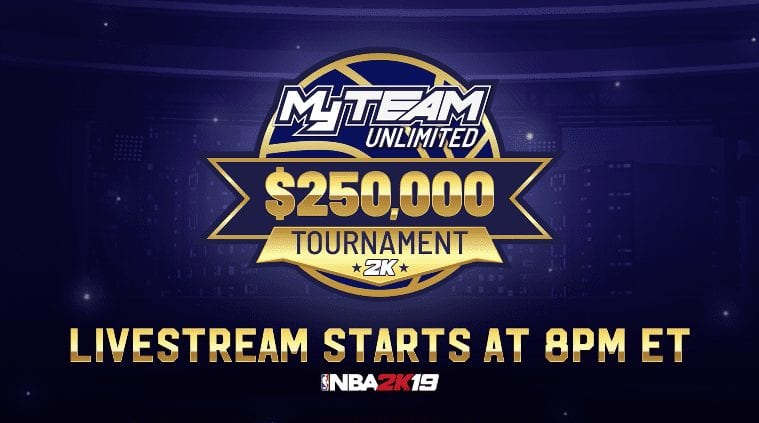 2K is live streaming the finals of its first ever MyTEAM Unlimited Tournament tonight on Twitch at 8pm EST. The finalists, Christopher Anderson and Dymaris Jones, will be competing for a final prize of $250,000.

Over one million NBA2K players played at least one qualifying game in this tournament.

Tonight, 2K is hosting the finals of its first ever MyTEAM Unlimited $250,000 Tournament ahead of NBA All-Star Weekend. The tournament final will be live-streamed tonight on Twitch at 8pm ET and will include interviews with Karl-Anthony Towns of the Minnesota Timberwolves and Jayson Tatum of the Boston Celtics.

The final takes place between Christopher Anderson (26; PSN ID: TURNUPDEFENSE) of Las Vegas and Dymaris Jones (24; gamertag: SkippTooMyLou) of Detroit. The two finalists emerged as the last two teams standing after 16 weeks of qualifying games from October to January and a 32-team single-elimination tournament earlier this month. Over one million NBA 2K users played at least one qualifying game in this tournament and over 15 million qualifying games took place.

Anderson qualified for the single-elimination tournament as the 9th seed in the PS4 bracket. He played for Cavs Legion in the NBA 2K League last year and is in the pool of draftable players for the league’s second season. Jones qualified as the 8th seed in the Xbox One bracket. Both finalists were crowned champions of their respective consoles to advance to the final, which will be played on Xbox One.

Both finalists received tickets to the NBA All-Star Game in Charlotte and additional prizes, but only the winner of the best-of-three matchup will win the $250,000 grand prize.