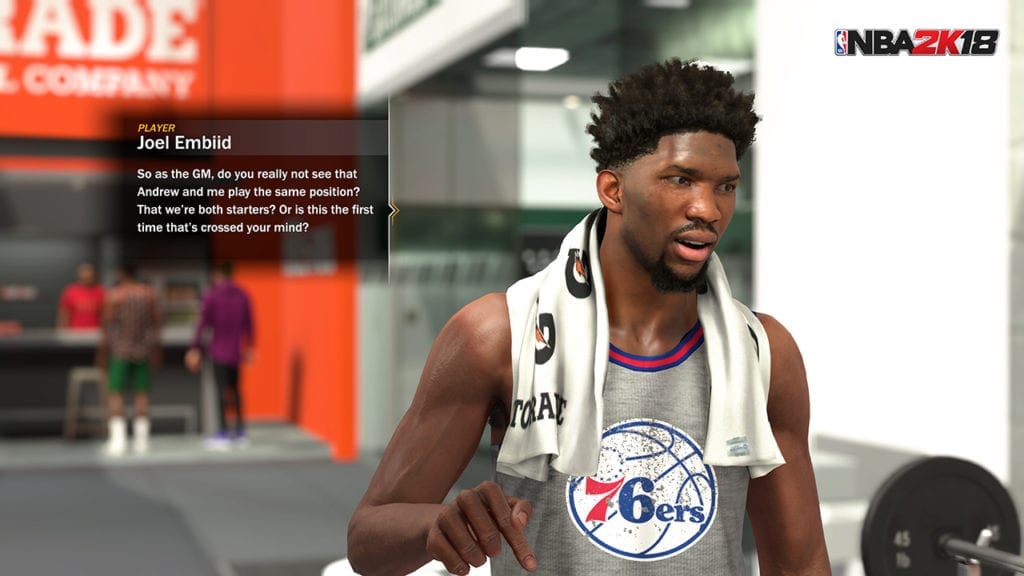 Beyond the unresolved Kyrie Irving situation, we are finally and officially in the NBA dead period: after free agency but before training camps.  So you know what that means, right?  Time to talk about NBA 2K. With the recent news dump of MyGM and MyLeague upgrades, let’s take a look at what’s hot and what’s not so hot. It’s almost as if the good folks at 2K read my article a few weeks ago. Almost. Of course, this is the natural progression of 2K. Each year, it becomes more and more realistic. Including the moratorium period is just another example of that. There wasn’t much information provided on how the moratorium period will work, but we do know that it will last three days and verbal agreements can be made before they are finalized once free agency officially starts. 2K did go out of its way to clarify there would be no DeAndre Jordan moments, so the moratorium period will likely be fairly straightforward — at least for this year, that is. It will be interesting to see how many players, especially big name players, verbally commit during this time compared to how many use it to simply to test out the market and rule out certain teams.

“There are many, many layers to NBA free agency, and the inclusion of cap holds adds yet another layer of realism to the 2K experience.”

This was perhaps the most prominent missing item from the free agency period. A big part of front office work, especially in the days leading up to the start of free agency, is taking a look at your current free agents and how they impact who you might target during free agency. If there is a player on your roster you want to keep only if you can’t scoop up your top free agent target, then your player’s cap hold will reduce your available cap space to sign free agents. There are many, many layers to NBA free agency, and the inclusion of cap holds adds yet another layer of realism to the 2K experience.

For people like me who enjoy playing some sim-only franchises, the addition of the G-League is huge. Gone are the days of your draft prospects rotting on the bench. You can now send them to the G-League where, even though the games themselves aren’t playable, you’ll be able to scout players based on their performance. This adds even more authenticity to your front office’s scouting abilities as you can now make decisions that are stat-based (hello, new analytics tool) instead of just ratings-based. And of course, two-way contracts made their way in, which will give you even more control and flexibility over your roster decisions.

“The draft itself has felt stale in recent years, so including these items along with the ability to finally trade draft rights will pump some life back into this feature.”

Prospect stashing is one of the things I am personally most excited about. This addition has the potential to finally make the draft interesting. Along with more realistic player ratings, the inclusion of overseas prospects who won’t be available to you right away will make your draft-day decisions even more difficult. Is your team ready to win now? Then you probably want to take a rookie who can contribute immediately. But if your team is in rebuilding mode and you don’t anticipate competing for a playoff spot for a few years, then it’s worth taking a risk on a potential international star, even if they won’t be available to you for a few more years. The draft itself has felt stale in recent years, so including these items along with the ability to finally trade draft rights will pump some life back into this feature.

In recent years, 2K has stepped up its game by implementing as many of the CBA quirks as possible. 2K18 looks to be another big step in that direction. In addition to capturing much of the new CBA, including super-max contracts and properly adjusted raises for rookies and vets, 2K will also include for the first time the stretch provision and over-38 rule. The stretch provision is especially big because if you find yourself needing cap space to chase a star free agent, you can waive one of your bigger contracts and “stretch” the cap hit over several years. Given that the 2K franchise progressed from adding relocation to adding expansion, I was hopeful that we would see contraction added this year. But alas, no dice. I’m no expert, but it seems to me that it would take no less work than was required to add in expansion. Obviously, I could be wrong. But I also wonder if, from a creative license perspective, the NBA is hesitant to allow this feature into the game.

Contraction is fun from a fantasy perspective, but it’s rarely talked about in the real NBA. In fact, the current thinking in league circles is that more expansion is inevitable due to all of money flowing into the league.  If a team (or multiple teams) had to contract, it would most likely be due to a lack of finances, so you could understand why the NBA would be lukewarm to adding this feature.

But who knows what the real reason is here. For all we know, it could be something as simple as the 2K team doesn’t see the need for adding this feature. But for me? The thought of contracting four or so teams and having a fantasy draft for those players would add a lot of fun and intrigue to the franchise modes.

No Mention Of Improved Trade Logic

This is one of the most frustrating aspects of MyGM/MyLeague. If you’re a frequent player of the franchise modes, you have no doubt run into some head-scratching trades. Far too often, the trades proposed to you by other teams make little sense. Teams offer you far too little for your own stars and they do not value first-round picks as highly as they should, for example. The 2K team clearly put a lot of time into this new analytics tool, which will be a great asset going forward. That same effort would be appreciated in shoring up trade logic as well.

“The thought of contracting four or so teams and having a fantasy draft for those players would add a lot of fun and intrigue to the franchise modes.”

No Mention Of Contract Improvements

The market changes so rapidly that it’s difficult to nail this down with real-time realism, but with 2K17, you see good, solid role players sign for far cheaper than they ever would in real life.  The top dollar guys are, for the most part, handled appropriately. But once you get past max-level guys, there are way too many head scratchers.

During contract negotiations, it would be nice to see the player’s agent reference the deal of similarly skilled players. So if you try and sign Marcus Morris to another cheap contract, his agent would point out that similar players are making closer to $10 million or more per year.

The changes outlined above and in the blog should apply to both MyLeague and MyGM. As for MyGM itself, little was said other than it will be storyline-driven, with the caveat that you will still be able to manage your franchise the way you want. As I’ve said numerous times, I like the idea of MyGM more than I like the execution of the mode. I find it to be too cumbersome and it forces you to make choices where there are sometimes no good options. That being said, the blog emphasized that they are excited about the changes to this year’s mode, so I am looking forward to giving it a good test drive once I get my hands on the game.

This isn’t necessarily groundbreaking but, as they said in the developer blog, it’s less about one particular improvement than it is about the sum of everything put together. Other than the new storyline-driven MyGM, as of now, everything else appears to be getting a nice polish as opposed to a clean restart. 2K has been great about making enough tweaks and improvements each year to keep fans excited about the series. And I, for one, am excited to get my hands on NBA 2K18.

What about you? What did you think of the MyGM/MyLeague details? What are you most excited about? What do you feel is missing? Let us know in the comments!