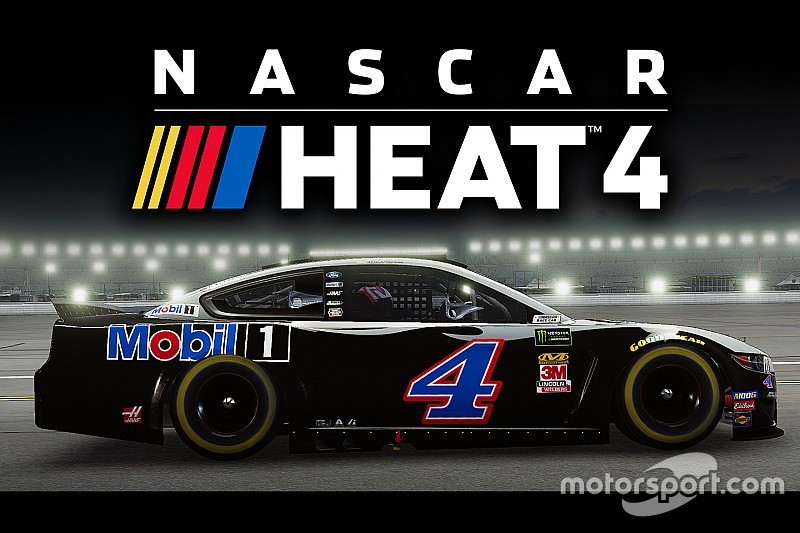 After seeing the NASCAR license taken in multiple directions over the last decade, 704 Games has chosen a path, built a foundation and are continuing to build upon that every year. The pace in which the improvements are coming may not be to everyone’s liking, but the gains are being made, and the team’s commitment is there for the long haul. With NASCAR Heat 4, the hopes are that the changes and improvements are tangible and meaningful. That’s a big question for sure, and I’ll try to answer that question below.

With racing titles, it is easy to talk about the racing physics and how they add or detract from the overall quality of the game, but the community needs to understand what areas it affects the game. In the case of NH4, the newly improved physics genuinely affect every aspect of the title when it comes to the action on the track, in a positive way, and the racing has taken a substantial leap forward because of the new changes. 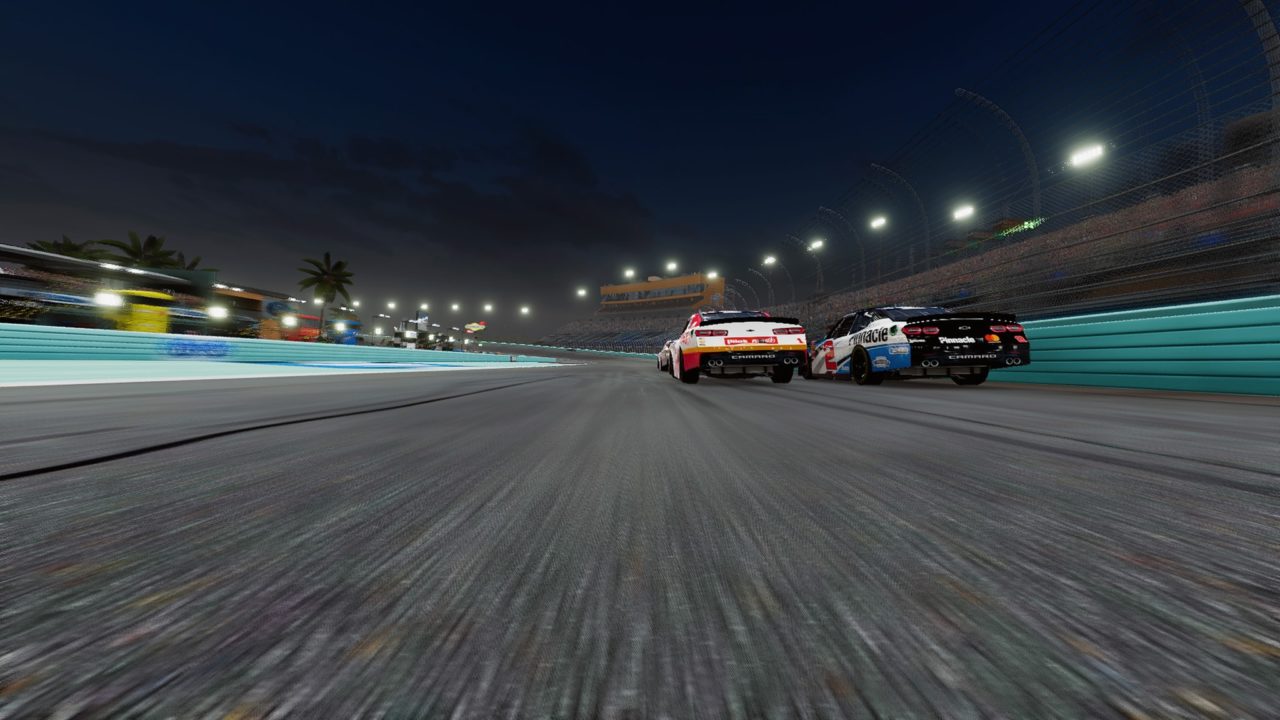 From the new tire model, to the interaction between the car(s) and track, to the improved handling, the newly implemented physics forces us to approach the latest NASCAR Heat title in a way we have not seen in a licensed NASCAR game on a console. When racing on higher difficulties and with assists lowered or off entirely, NH4 requires you to understand the line you are running, the usage of tires and how that changes throughout a race.

If you are racing at a track like Atlanta that is notorious for chewing up tires, then your approach to each lap will need to change as the race progresses to be successful. Another impactful way the new physics have changed the game is the way cars interact with the natural undulation of the track. You can now feel each track’s imperfection(s), and because of that, it forces you to deal with how each groove requires a different approach. 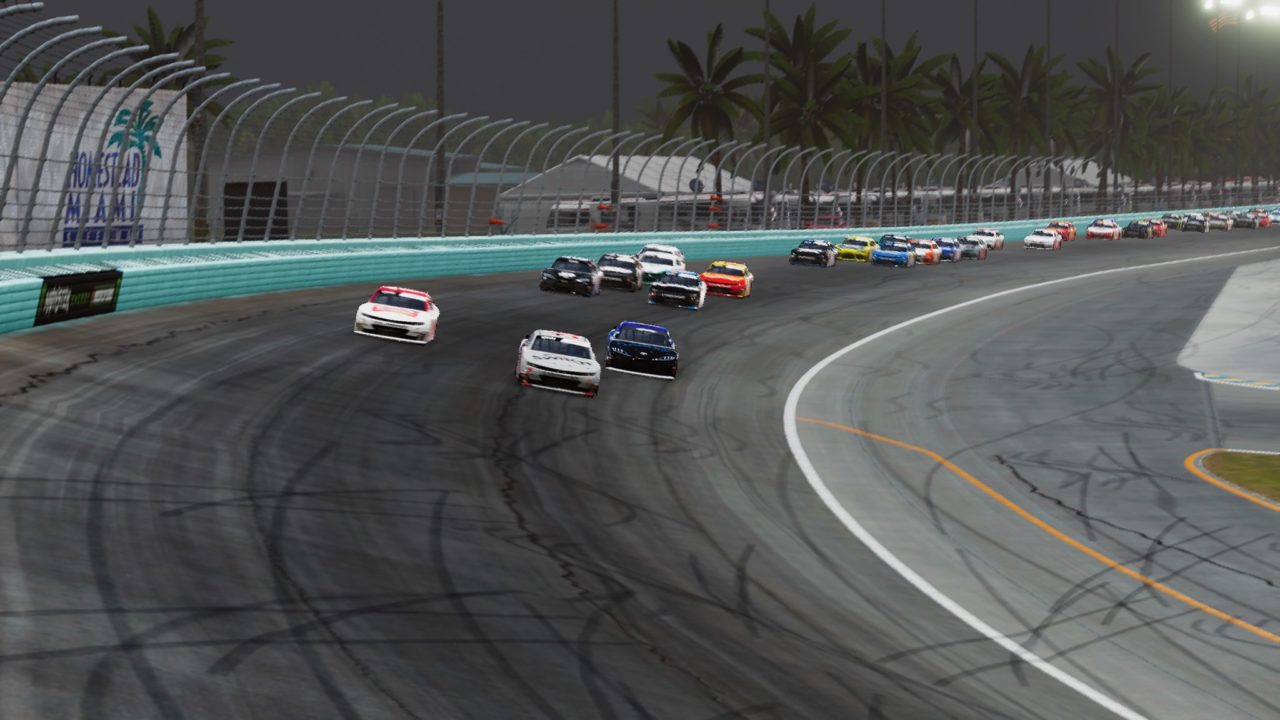 Lastly, the car-to-car interaction has improved in a significant way, both in terms of front-to-back drafting and side-to-side drafting. You can feel the air from your opponent’s car having a real impact on your vehicle’s handling, and the draft can quickly force you out of the groove or line that you are currently racing, especially if your tires are lacking grip. 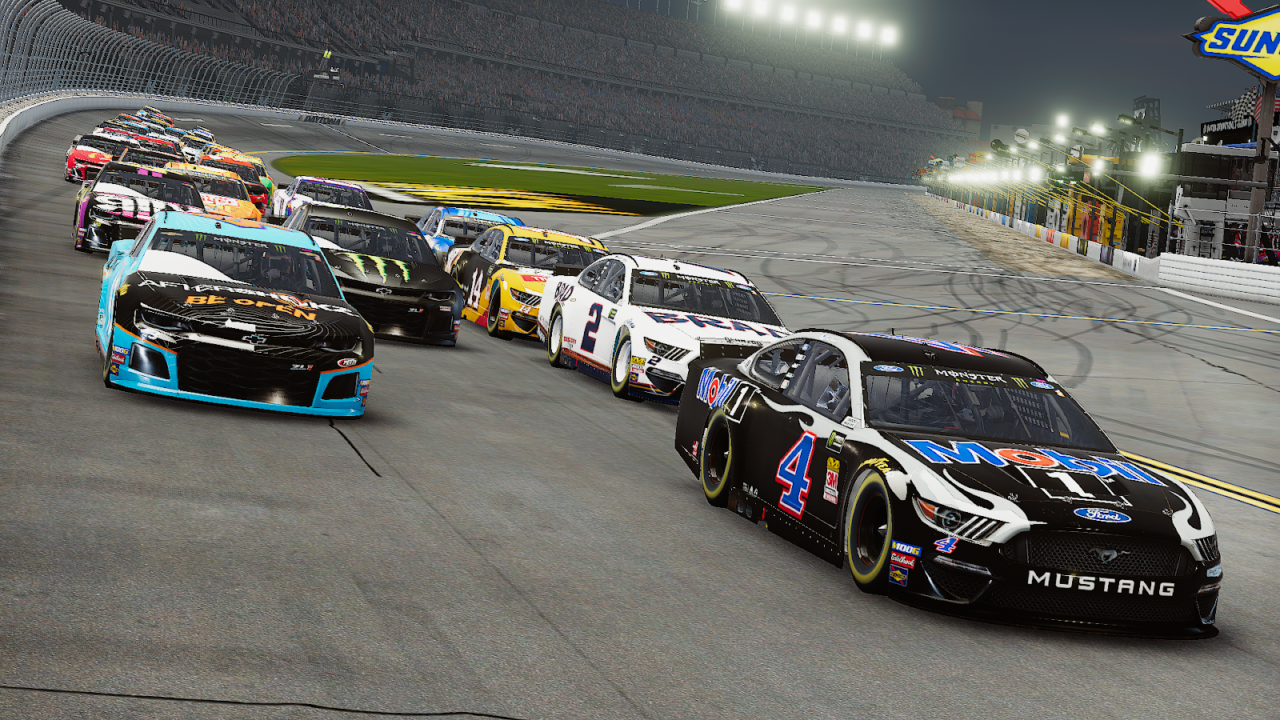 The move to the newest Unity engine provides a nice upgrade in graphic fidelity for NH4, and while there is sadly still no support for 4K or HDR, the overall graphical improvement is noticeable on the PS4 Pro. The track colors are more natural and vibrant, the cars are well designed and pop onscreen, and the sky during night races draws you into the world in which you are racing. 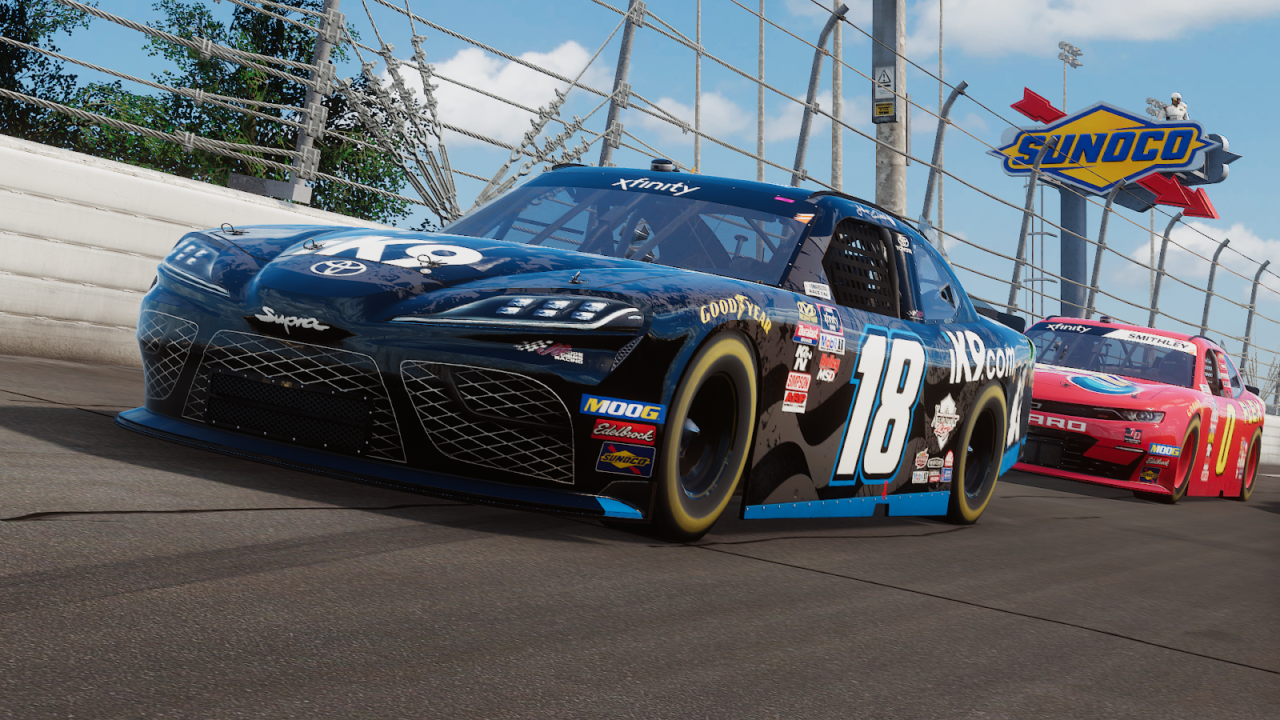 It’s a disappointment to still have no 4K or HDR support for the NH series, but the onscreen improvements are strong enough to make me take notice and appreciate the upgrade, especially as a veteran of the series.

In previous versions of the NASCAR Heat career mode, it often felt like it consisted of race, race, race and race some more. It was somewhat repetitive and a bit boring after a decent amount of time was devoted to the mode because it felt more like a series of race-now races and less like a full-blown career. 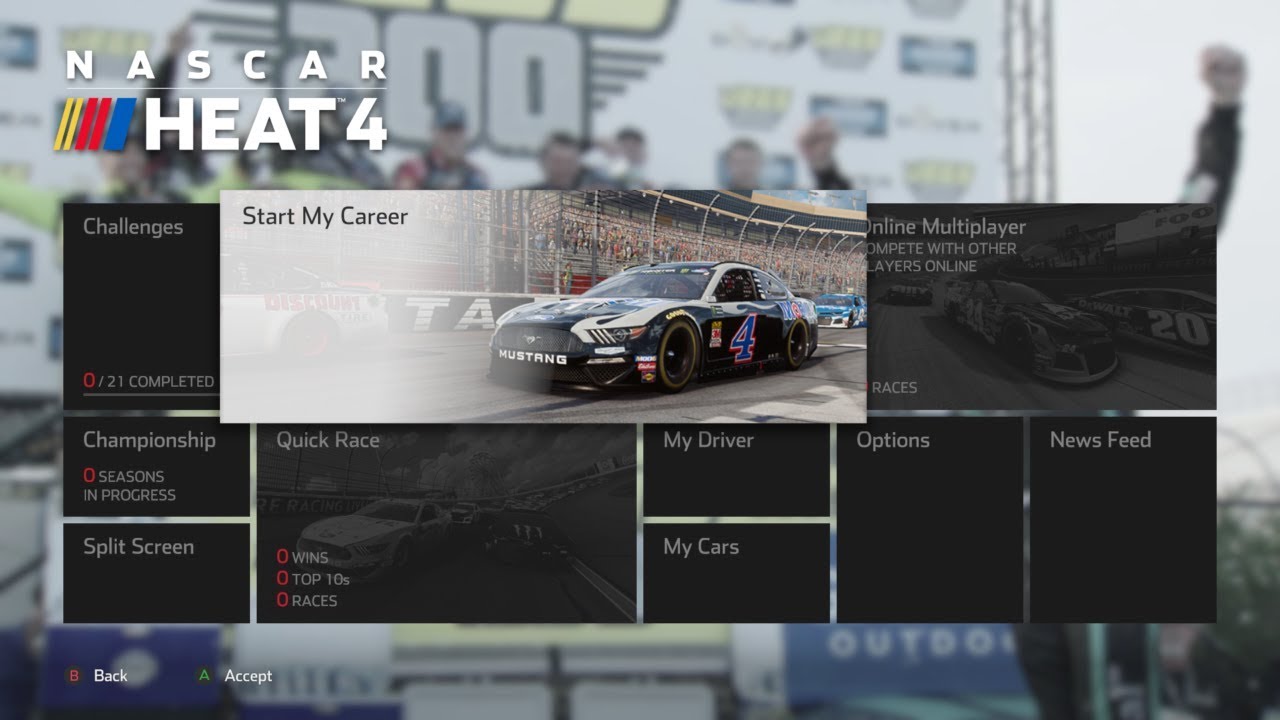 While there is still a lot of room to improve career mode, the steps taken this year to enhance the mode have moved the needle from repetitive to engaging over the long haul. You will still find you have the option to be an owner or driver, but this year you can start your career in any of the included NASCAR series.

For my money, choosing to be an owner is where the actual depth of career mode starts to show itself. As an owner, NH4‘s career mode will force you to fill out and train staff, improve facilities, purchase track-specific vehicles and have those vehicles repaired, which can be costly both in time and money depending on how clean you drove in the previous race. 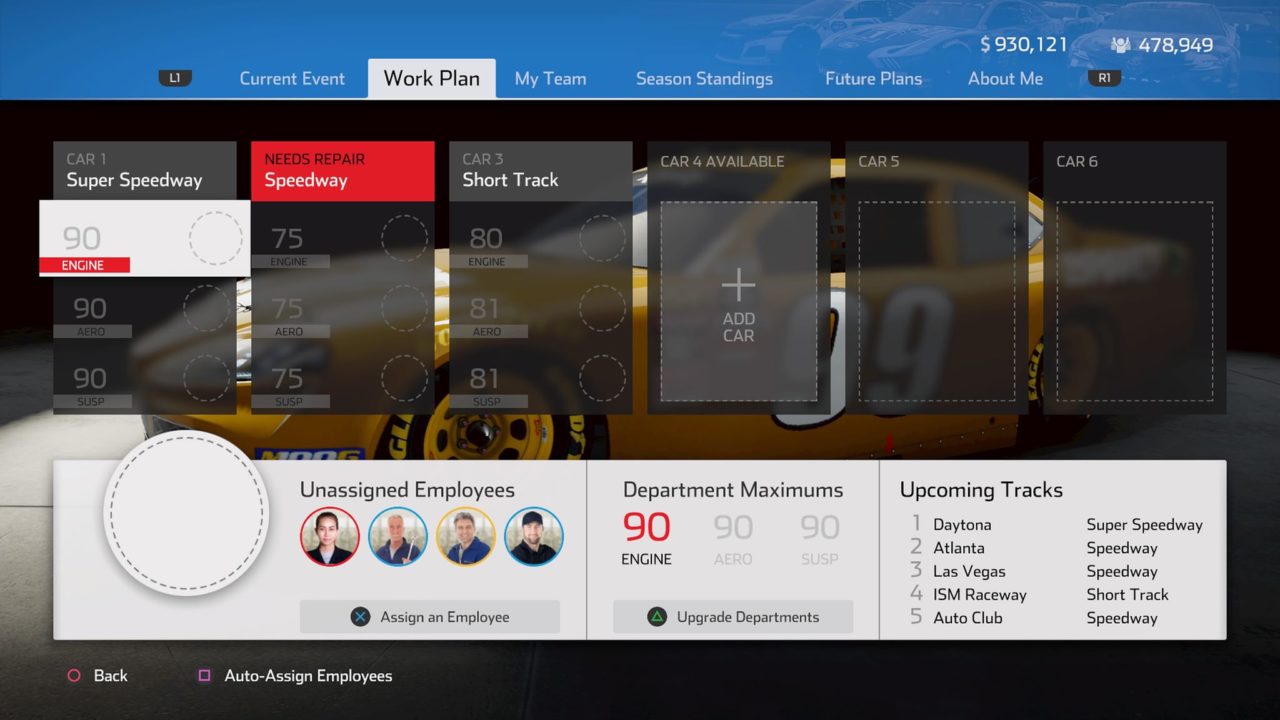 As a new owner with limited funds, it can be quite challenging to build your NASCAR empire, and you will find yourself having to race a car or truck that is not tailored to your current venue. By doing so, your vehicle will be deducted ability points, but with limited funds comes limited options. Even in year four of my Xfinity team ownership, I still have struggled to add a road-course car or build out my entire facility and team.

As much as I appreciate the sharp improvement in graphic fidelity, I take issue with the game’s inability to lock in at 60 frames per second. On the PS4 Pro, it was evident that at times the FPS would dip well below 60, and when racing in a game that requires specific detailed movements around 40 other cars at precise moments, that inconsistency in results can be painful.

On top of the frame rate, I also witnessed screen tearing issues, and while not nearly as prevalent as the FPS issue, it was still noticeable. In the end, the inconsistent frames and screen tearing are not overly detrimental to one’s enjoyment of the game, but hopefully they can be rectified in either a patch. 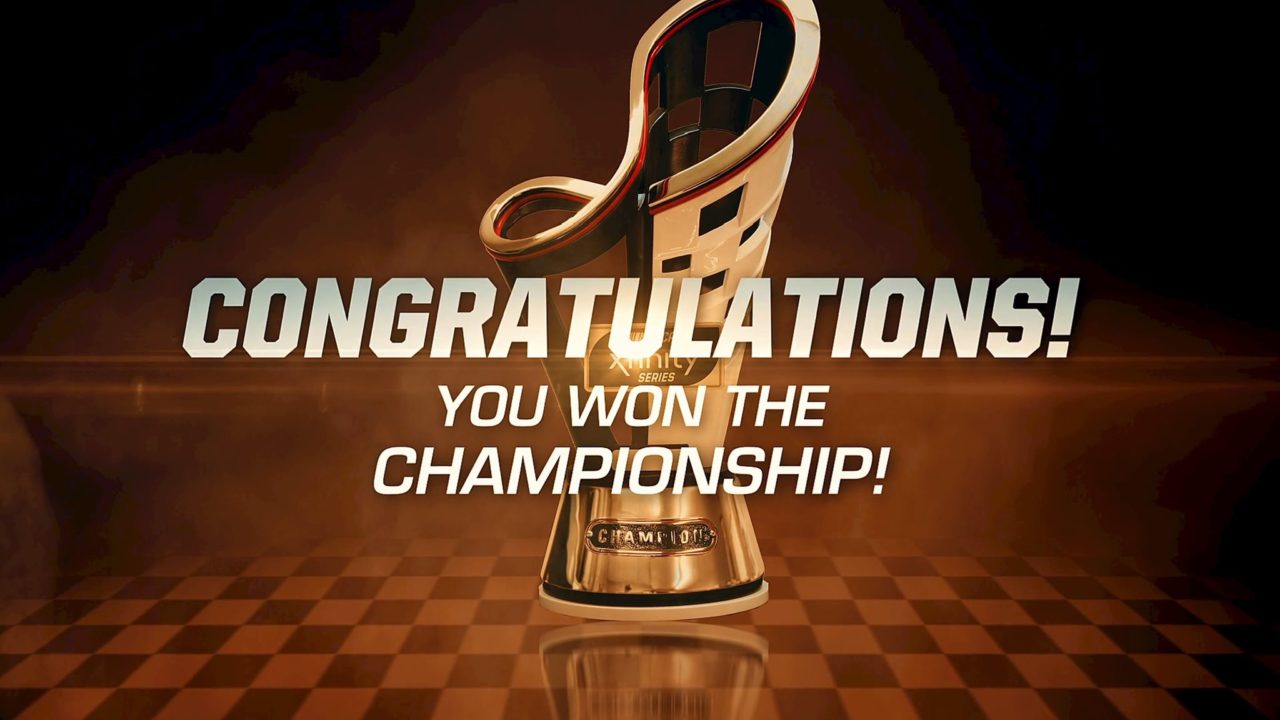 What presentation that’s included in the game is on point, but there just isn’t enough of it. The track intros are well done on the cup level, the burnouts are fun and the quick track-side shots do an excellent job of showcasing the track itself. The problem is we need more flyovers; we need real victory lane celebrations; we need actual championship celebrations and pre-race pit lane flyovers. NASCAR is such a symbolic and tradition-laden sport, and the Heat series just barely scratches the surface of what takes place on any given weekend.

I have been griping about not having an in-race replay system in the Heat series for years, and here we are again with no option for just that. The ability to capture a screenshot or quick video of on-track action and instantly upload it to any of the social media options is a huge factor for me. It helps increase awareness of the game to curious fans who may not have played the series, and it’s generally cool to see someone’s crash or photo-finish from a race they just finished or are currently racing.