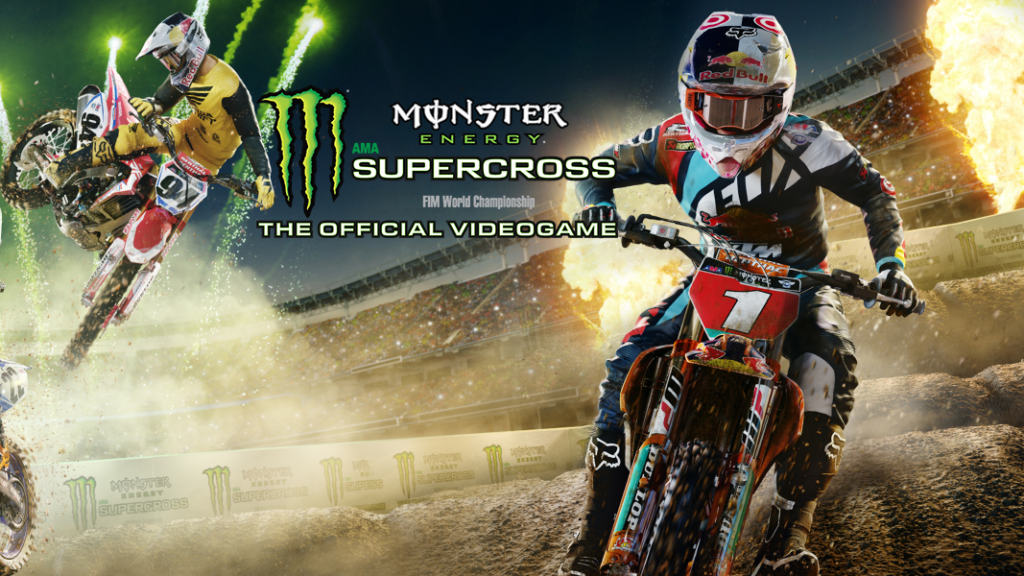 There is no question the newest title from Milestone has been a highly anticipated one. While many found a great deal of fun and excitement in the developer’s previous MXGP titles, Monster Energy Supercross has been the title many have wanted for years. Now the question is, was it worth the wait?

For starters, Milestone has created a title that is full of options, and this lets users adjust on the fly in terms of adaptability as they become more adept at the game. Obviously this path is very important if you are trying to draw fringe fans of the sport, or users who have zero familiarity with the series. So the accessibility is there, but the game does a lot more that should please most fans of the series. The first being a deep career mode, and while it can be a bit repetitive after a season or two, what they have included is enough to keep me coming back for more. You start off in the 250cc division, and are given a bike that will need to be upgraded over the course of the season to give your driver the best chance at consistently hitting the podium. The user is awarded XP during each race, and the better you do the more XP you will receive. These XP points can be spent on upgrading the bike and your aesthetic gear. 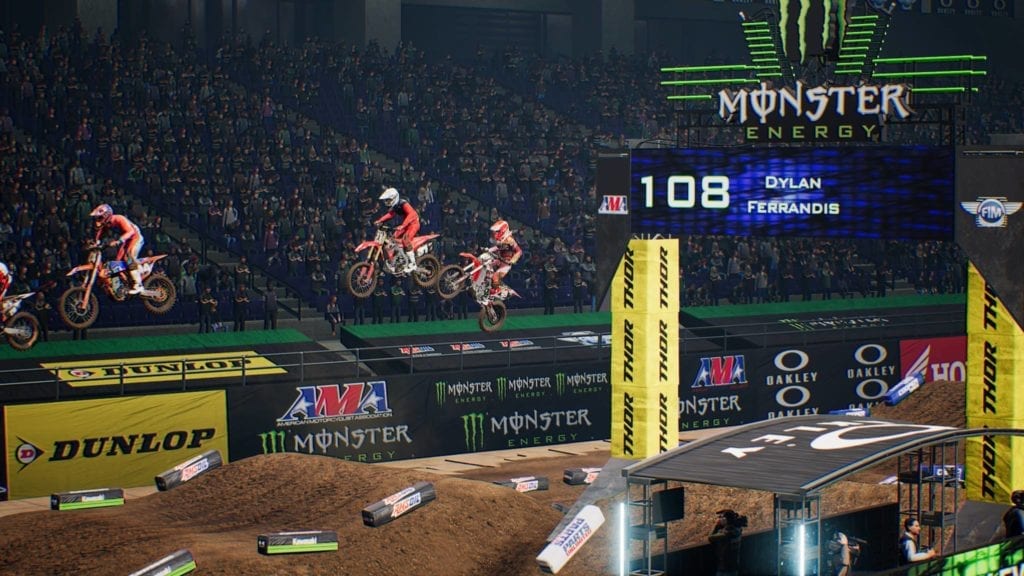 The ultimate goal is to reach the main 450cc division and gain access to a full slate of races across North America. Depending on what level of difficulty one chooses to race at, the jump from the 250cc division to 450cc division can be quite drastic in terms of competition. It requires a more consistent performance as your opponents’ efforts are ramped up quite a bit. No matter what series you are racing though, you will have sponsor-related goals that you have to achieve in order to maintain their series sponsorship. Another aspect that most should really enjoy is the difference in the tracks you will race week to week, and how the approach will need to be tweaked to give you the best chance at winning. In the end, Milestone has a created a career mode that is addictive and has enough to keep me busy. 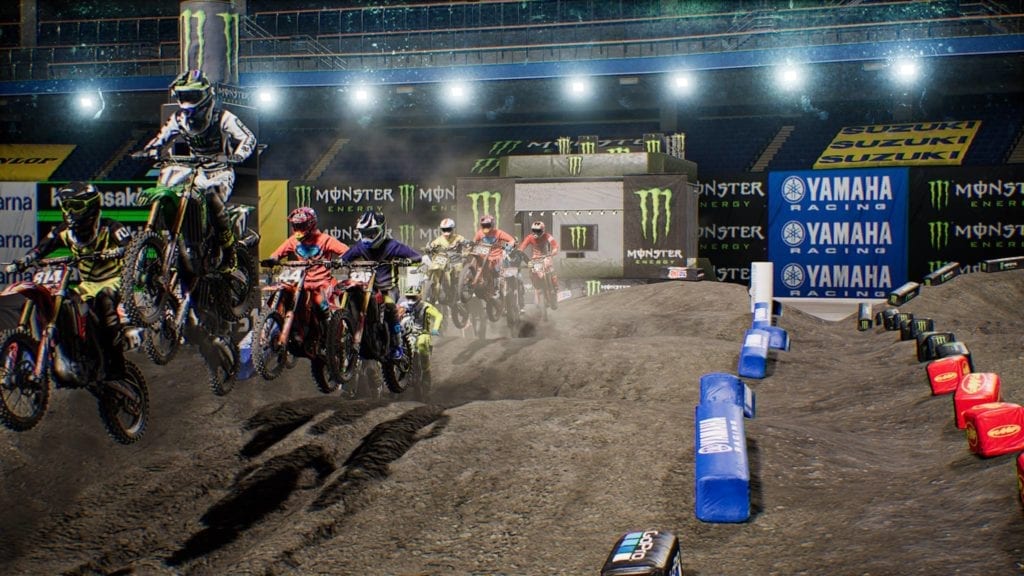 While the career mode is solid, many are more concerned about what online modes are offered with MESC. The options here are plentiful. If you’re familiar with past Milestone offerings, then you should feel right at home. The title allows for almost any scenario one can think of, whether that is a single all-user race, or a full blown championship with a few friends and the rest of field filled with AI drivers. Online gives users the ability to set up almost any scenario one would want, and at the difficulty that they chose. For those that have concerns, the online racing feels every bit as good as if you were racing offline. I experienced no drops, hiccups or lag at any time. The online offerings are every bit as deep as the career mode, and should give online aficionados some much added longevity to this title. 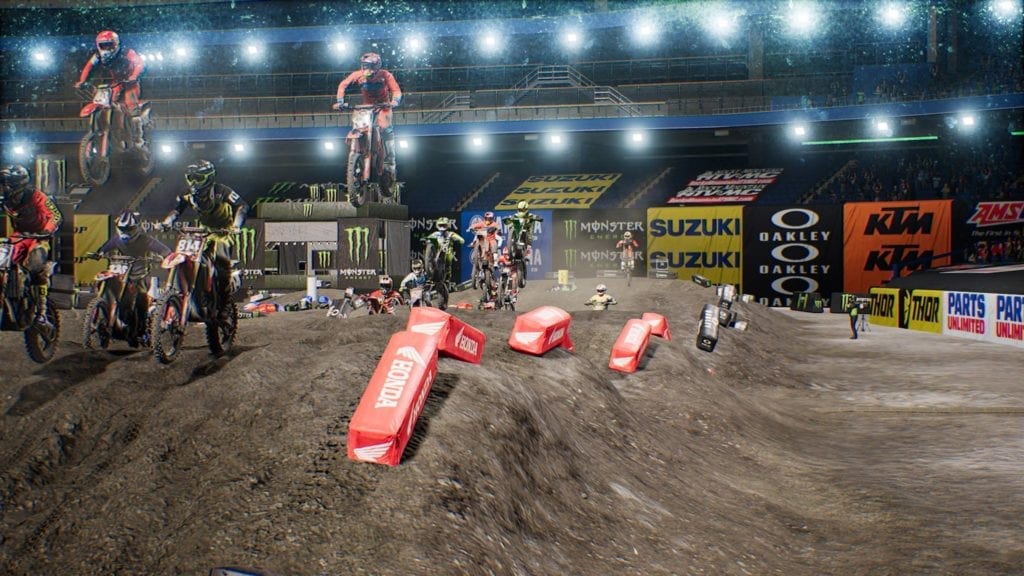 Lastly, of the things I really like about MESC, are the controls and overall feel of the racing itself. Yes, it’s true, I have never raced a bike inside an indoor arena on a track full of professional riders, but that doesn’t stop me from understanding and appreciating the difficulty of it. Milestone has struck a nice balance of realism and arcade to try an appease most of the fan base. What I most appreciate about the controls is the connectivity that one feels from the bike and the track surface itself. I can actually feel the tire and dirt fighting each other to coincide, and this allows one to understand the track degradation throughout the race, and helped me decide my approach to each and every aspect of the race. This feeling can be incredibly difficult to pull off for any developer, but Milestone has done just that.  The game does offer different levels of difficulty in regards to the handling, and it is incumbent upon you to decide what setup works best for you.

While I won’t spend a lot of time describing the track editor that Milestone has included in the game, I will say that it is easy to use, easy to setup, and should allow people to create almost any type of track they desire with great accuracy. On top of that, not only can you create them, the game also allows you to upload your creation to a community vault where others can download and enjoy your track. If you had fears that the editor would take hours to learn, have no fear, the tutorials do a great job of walking you through the process, and you will be creating and editing tracks in no time at all. 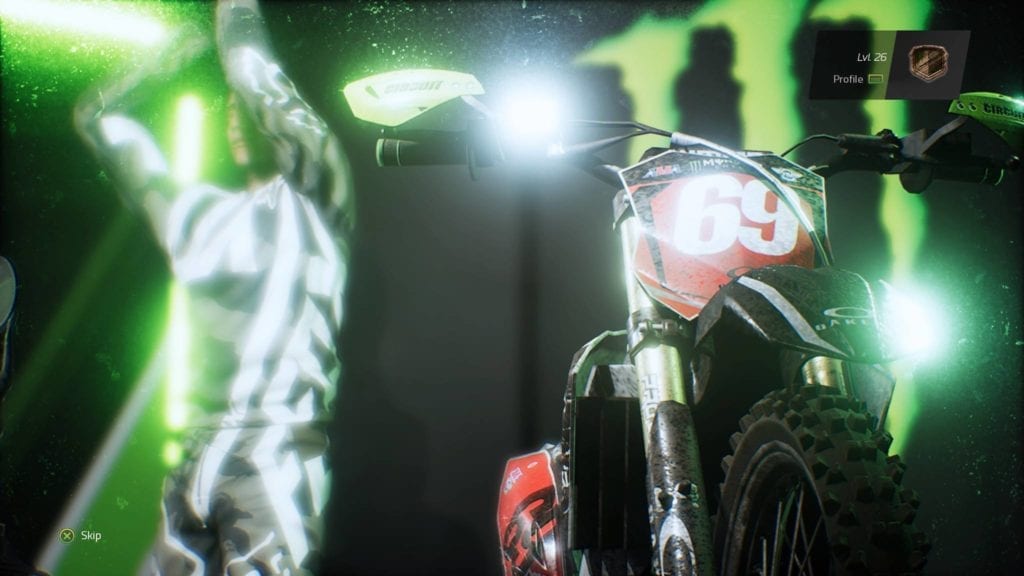 MESC definitely delivers a lot of positive experiences when you grab hold of the controller, but as with any title, there are still some things that the game could do better. To start with, the physics issues that were present in the MXGP titles still plague the new MESC game. If you are not familiar with the MXGP titles from Milestone, then I shall enlighten you. Often you will see your rider casually take a stroll on top of an opponent’s helmet when descending from a jump, and it can result in disastrous results, but mostly for you. Also, when jostling for position early on in the race, one will notice how the rag doll effects will create unrealistic results, and once again, you will find that you will take the brunt of the damage while others walk away unscathed. As I gained in-game experience though, I found myself crashing much less, but still a lot more than the AI did, and often in scenarios that seemed to not warrant it. Now, that’s not to say you will never witness the AI tumbling, but definitely a lot less than you, even in the exact same situations. The point here is not to bash on the physics because overall the game provides a very realistic feel between the rider, the bike, and the surface, but that doesn’t negate the few instances that bad physics can come into play.

Graphics A Touch Below Standards

Physics aside, the game has a few other problems that some may take issue with over the long haul. Milestone has built this title on the Unity engine, and while that engine is very developer friendly, it seems to struggle in this instance with next-gen graphical fidelity. At times the game looks beautiful, but at other times it could be compared to a PS3 release.

One will also notice that load times are still a bit of a problem with the newest title from Milestone, and the occasional drop in frames per second when bunched up with a group of riders.

Lastly, the lap times being produced by the AI during practice will not match what they produce in-race. I often found myself struggling to break the top 10 in practice times, but would win a race by 10 seconds or more (on the lower levels), and that is an issue. When people are trying to constantly gauge what level of difficulty they should be racing on, the times should mimic that from each session.

Milestone has created a very deep, fully licensed experience for the user, and an experience that offers a lot of fun and longevity to it. If you are a newcomer to the series, it may take some time to understand the nuances of the controls, but it is time well spent.

It’s a title that will be considered a fringe title for many, but that doesn’t mean it doesn’t deserve to be in your rotation — because it does, especially if you are into this genre of sports games.