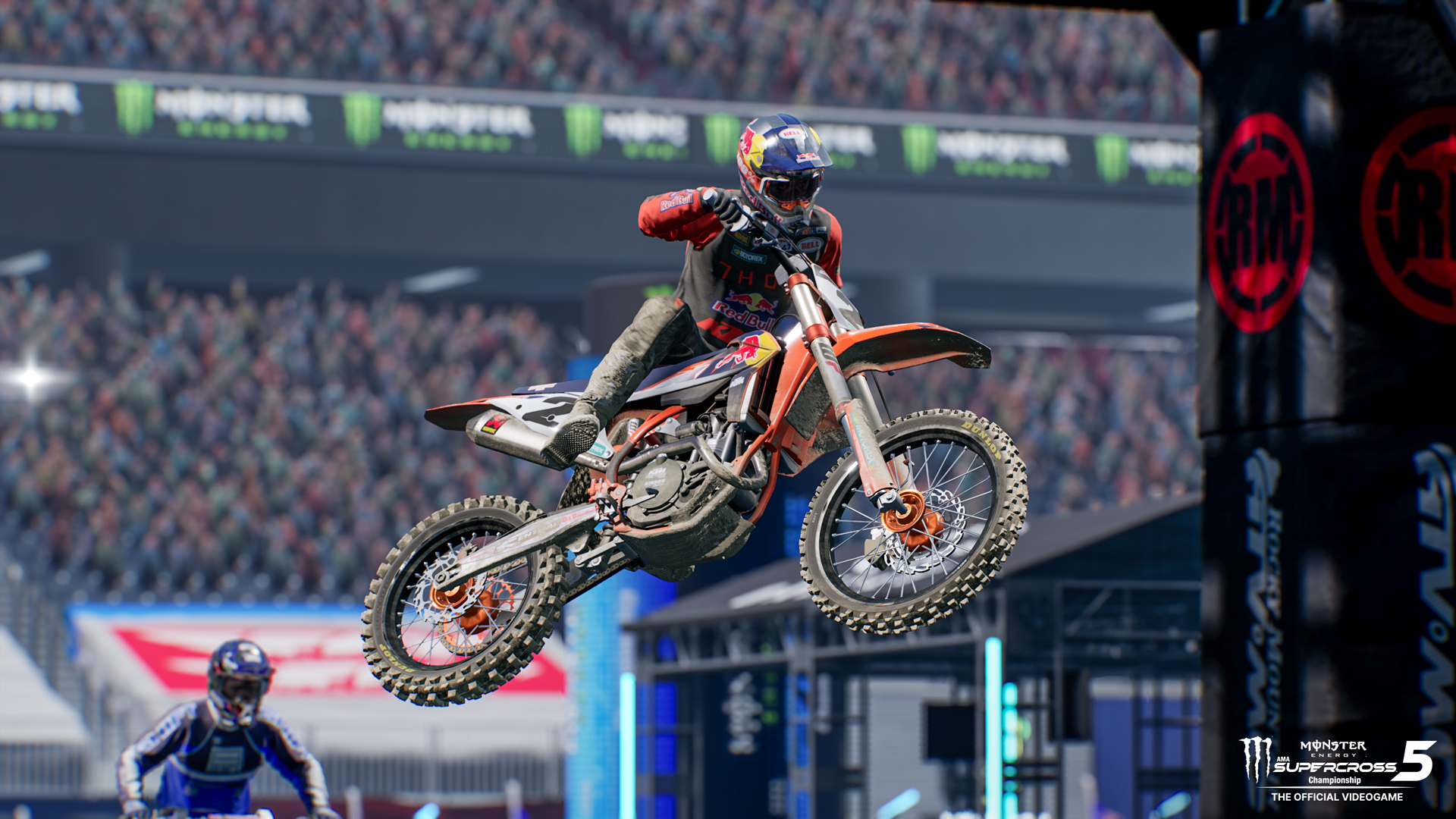 Milestone is back with Monster Energy Supercross 5 and looking to build off some solid improvements over the last couple years. Not every change within the series has been for the better over the years, but the Italian-based developer has a proven track record of implementing community feedback into the series. As it relates to my Monster Energy Supercross 5 review, this time around the the changes seem more organized than radical

Milestone gave me an early look at what to expect from this year’s competition, so if you read my early access preview, you know there was quite a bit I was excited about but that a couple legacy issues were still there as well. With the retail version finally here, it is time to see if those improvements continued and also see if some of the beta issues were addressed. 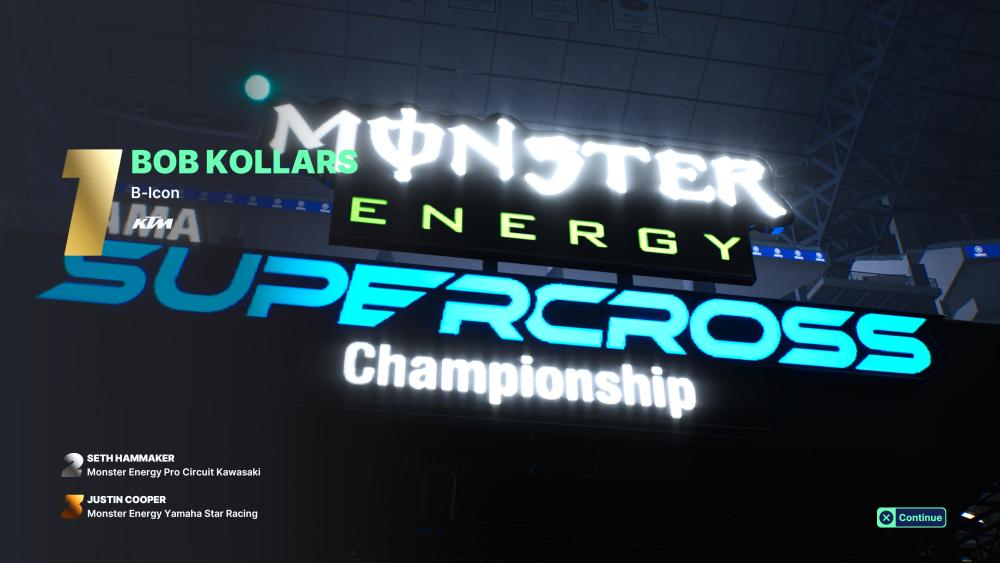 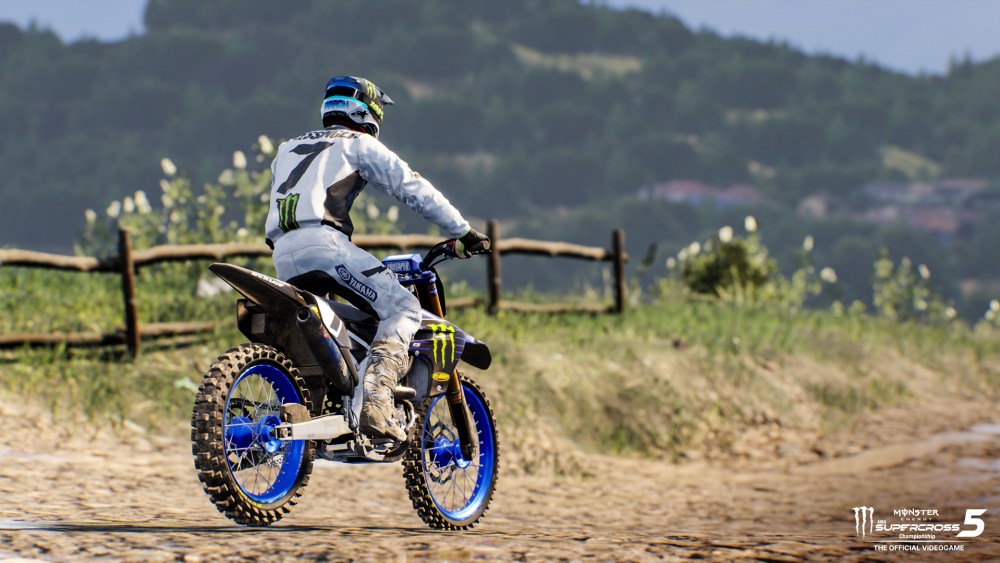 Saying the physics have been changed in a racing game is almost cliché at this point for any developer. Still, as with any title in this genre, the proof is in the pudding (or on the track), and thankfully, the evidence is there and noticeable throughout the game. When I speak of improvements, it starts with how the bike handles on the track and reacts differently to the race surfaces throughout the game. From mud and dirt to sand and the combination of all three at once, Monster Energy Supercross 5 delivers an excellent experience in the form of surface-to-surface interaction.

What the developers have delivered in the form of bike-to-track interaction is a solid improvement over previous efforts and one that kept impressing me throughout my time with the game. I could feel my tires ripping through the sand at Daytona or Atlanta. I could feel my tires bogging down in the mud-drenched surfaces and sliding through the dry dirt, and all of it felt authentic. When you combine the experience of dealing with multiple characters over multiple races, the game takes on a different feel and delivers a unique experience each time. 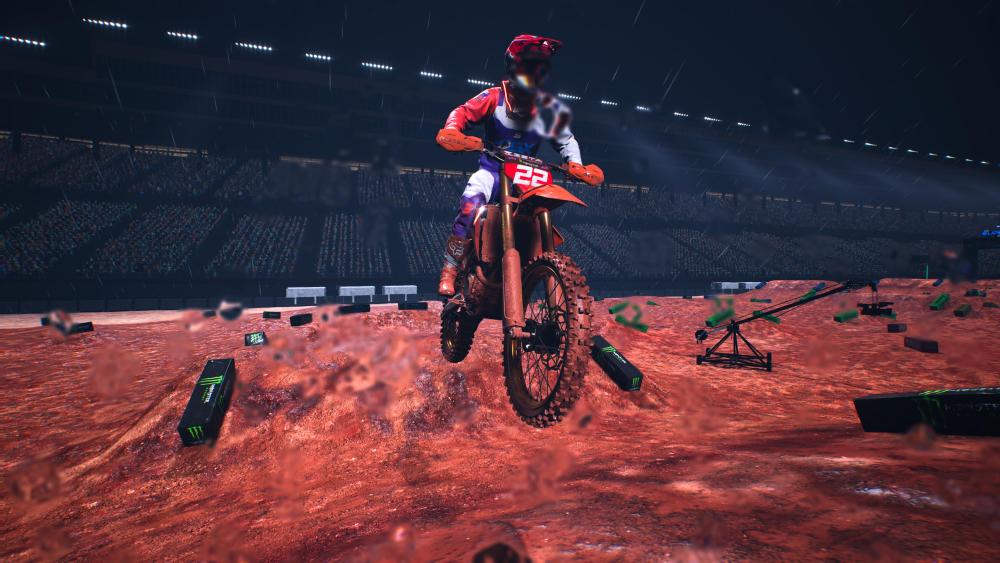 The new physics system goes beyond the track interaction with the bike. The jostling between riders while in a pack has seen some dramatic improvements and is just as impressive as the improvements to physics anywhere else found in the game. In prior efforts from Milestone, the pack physics were not “broken” or anything, it just always felt like the interaction between individuals in the pack had a high level of rigidity, both in feel and visuals. Now when launching from the gate and shooting for the hole, you can feel the little nuances of each rider making contact with you, bike components cracking against each other, and riders fighting for position with a violent approach.

If you read my preview of the game, I spoke about a legacy issue where during a jump your rider would land on the helmet or shoulders of an opponent and ride them like a surfboard. This was an ongoing issue for years in this series, and during the beta I saw this issue taking place enough that it was proving to be worrisome. That said, I am glad to report I witnessed none of that during my time with the game for this review. 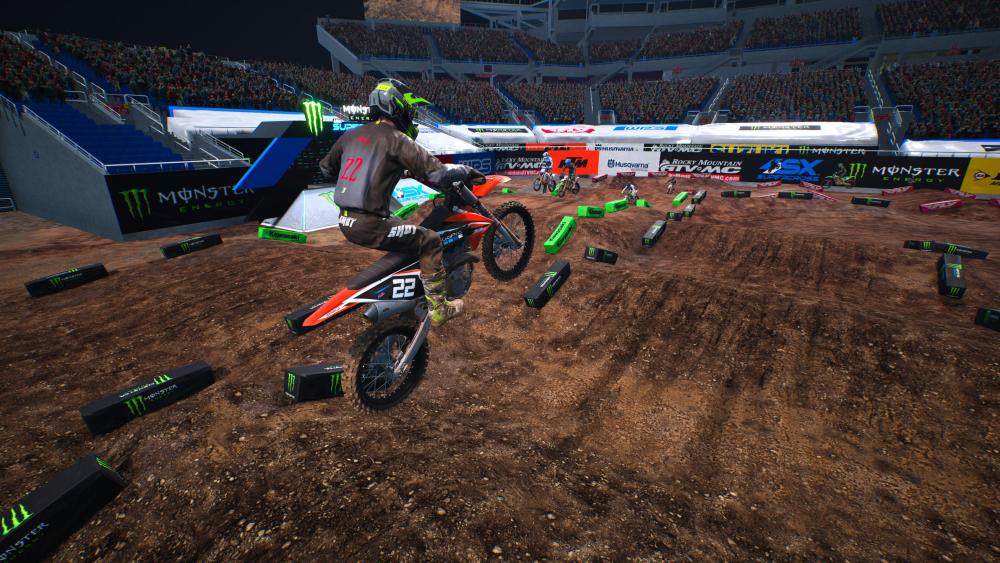 There were still instances of some physics issues when landing with other riders and some minor collision issues, but with so many individual parts on a track, seeing just a few issues is fine by me. The improvements in the physics department impact every facet of the game, and for veterans of the series, the changes will be instantly noticeable. For newcomers to the series, enjoy the upgrade.

In racing games like this, a large percentage of people flock to career mode as a source of longevity and offline enjoyment, and during a review, it is where I spend a lot of my time going as deep as possible into the experience. What Milestone has delivered here in Monster Energy Supercross 5 feels refreshing and full of content for the long haul. Now, that doesn’t mean career mode is a brand-new experience, it means the developers have cleaned up some of the issues that added little value and streamlined the experience as a whole. 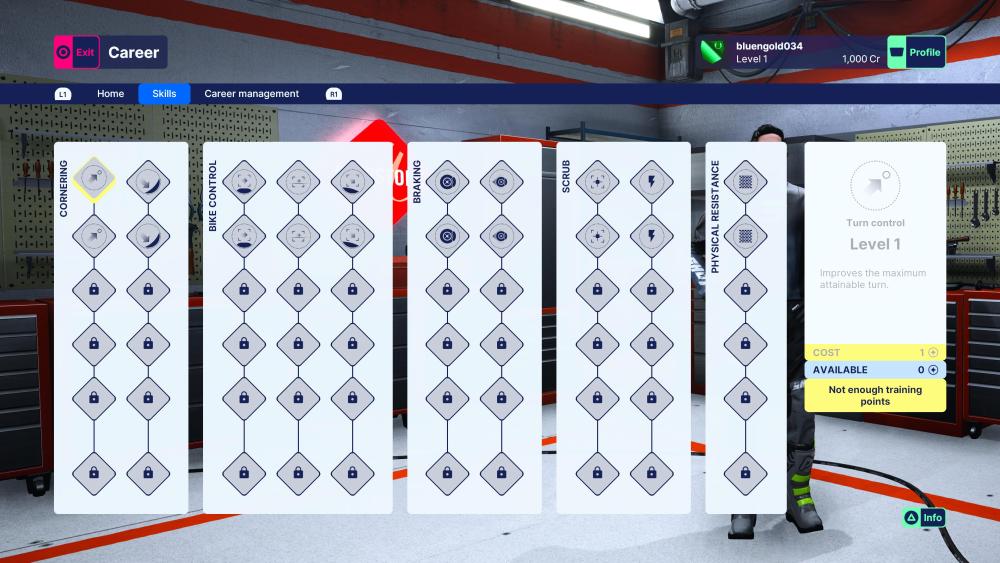 The game started me off as a young rider in the futures program and asked me to work my way up the ladder. After a certain point, the idea was that teams would be lining up to sign me as a coveted star in the making. Along the way, the mode allowed me opportunities to take place in special sponsor races and training to help accumulate XP, the in-game currency that helps you build out your rider’s skills and unlock different gear to apply to your driver’s race suit and bike.

Depending on your choice of options in career mode, the whole experience can be a long and detailed journey to the top, assuming you chose full weekend races with a higher difficulty setting. If you decide that you want to approach it as if you’re a once in a lifetime talent and pick easy difficulty and the “race only” option with no practice or qualifying for each weekend, the trip can be a short one that still provides an incredibly fun journey. 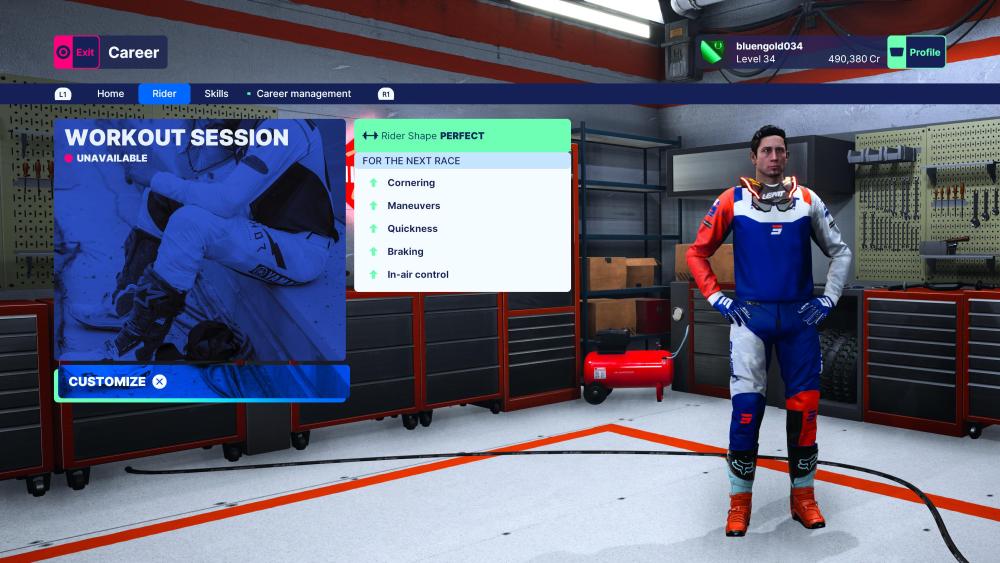 Whether it’s racing, training, healing an injury, or building up your skills through your skill tree, there is plenty to do inside of career mode. It feels fully fleshed out as opposed to a series of race-now exhibitions.

As mentioned above, I spent a lot of time in career mode, and I did so because of the level of challenge and tenacity displayed by the AI found in Monster Energy Supercross 5. The higher levels of difficulty provide more complex AI, and not a single time did the tactics they employ feel cheap or unrealistic.

From pushing me out of my line, protecting their line, and generally making it hard to pass them, the AI fights every bit as much as I did, especially during the turns and curves of each track. This takes a different turn in career mode as you start to create rivalries, and those rivals tend to make things even more difficult for you on the track.

Again, complex and challenging do not equate to unfair or unrealistic. 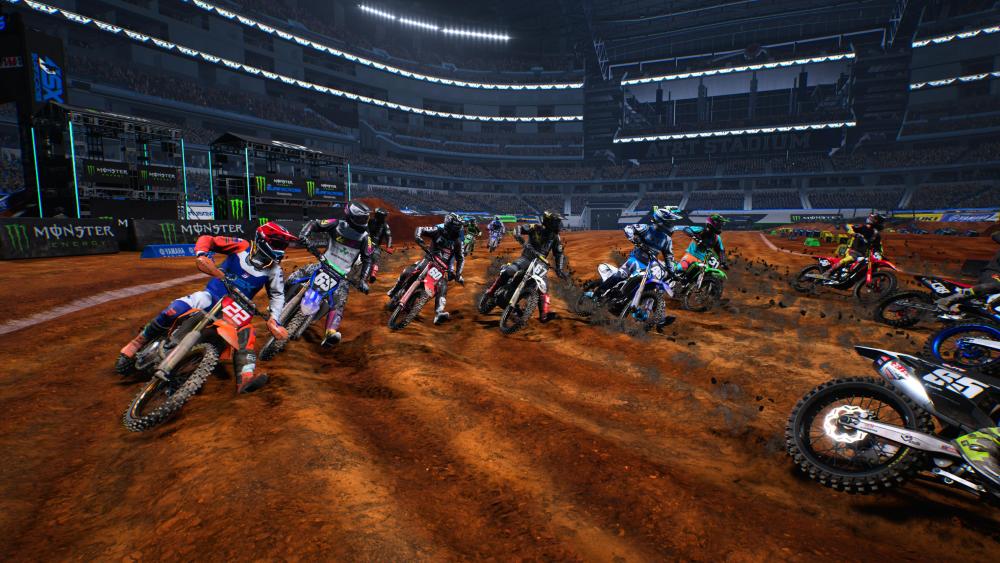 The AI is challenging enough that if I started to get out of rhythm on the track, I could feel the pressure begin to mount and that inevitably led to more mistakes, which could be a slippery slope. I had to maintain focus throughout and keep one eye on the track and one on my opponents and their approach towards me and my track position. In my time with Monster Energy Supercross 5, my affinity for the in-game AI grew stronger the more time I spent going against them, and I may have even had a few choice words come pouring out of my mouth during said review.

The core, meaning the bikes and tracks of the Monster Energy Supercross series, has always looked solid. Still, with the next-gen leap, the Milestone developers seem to have a complete understanding of how to utilize the extra power and memory that comes with the new hardware. The graphical enhancements and details can be seen throughout the game, from the beefed-up presentation and pyrotechnic shows during the pre-race to the bikes and tracks.

The ability to enhance the details of each bike, and the differences between each one, is visually noticeable. Each arena takes on its persona and differentiates itself from the others by pushing the details and nuances of each layout and the track-side surroundings. Even more impressive to me is how natural the surfaces look now and the way they pop off the screen. The clay looks like red clay, the sand seems white and granular, the dry dirt looks crumbly and loose, and the mud seems wet and thick. 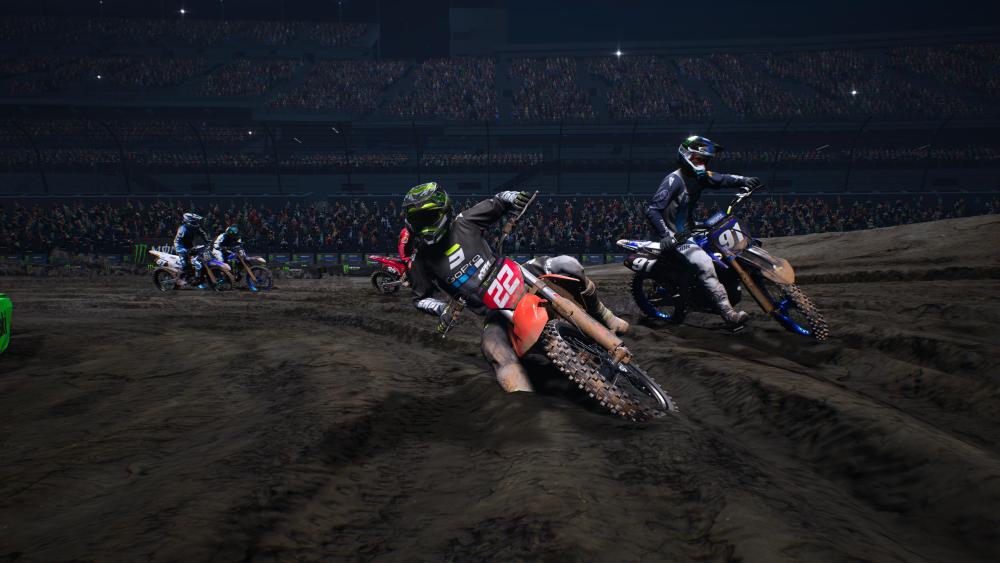 Whipping around each track at such velocity with so much action, one would think these details would get lost or become commonplace as time progresses, but that never happened for me. The combination of detail, strong racing physics, and competent AI opponents provided an exciting and fresh experience each time the gates dropped and my quest for the holeshot initiated.

The one caveat to everything above is that this review was done on the PS5, so results may vary depending on what system and version you snag. 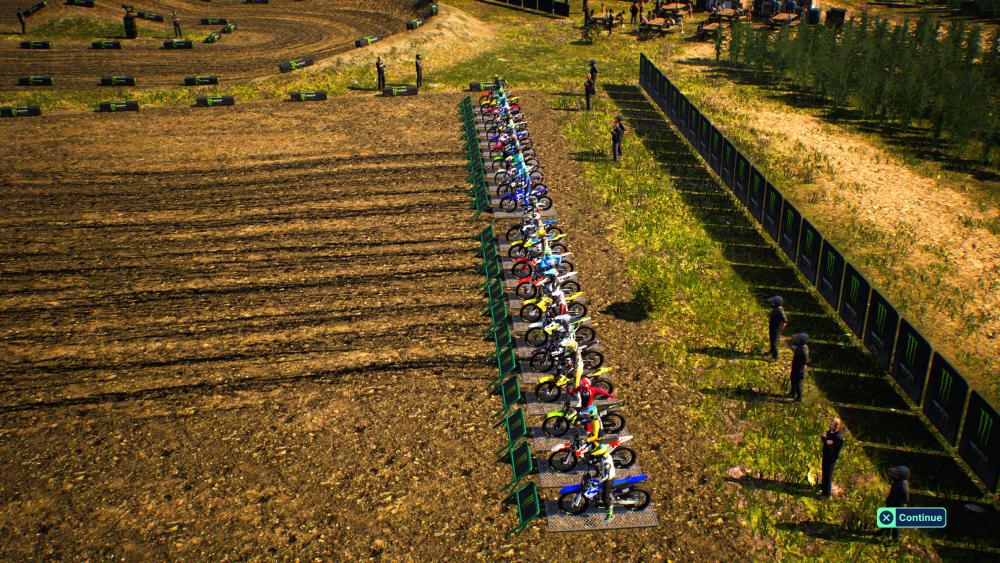 There were not many issues with the latest offering from Milestone, but one that has plagued the series from the genesis is inside the driver creation suite. The choices are still incredibly limited in scope, and the driver face options look like options we had from two console generations ago. I always admit that I understand why this isn’t a priority because your helmet covers your face while racing. Still, the immersion level goes down a notch when such a graphically beautiful game offers this type of driver creation suite. The problem is even more noticeable when you have access to a wide variety of authentic riding gear found inside that same suite.

I hope that Milestone has a solid enough foundation now that items such as driver creation can now be addressed in the future. My final desire is that Milestone offers a way to scan our faces into the game. 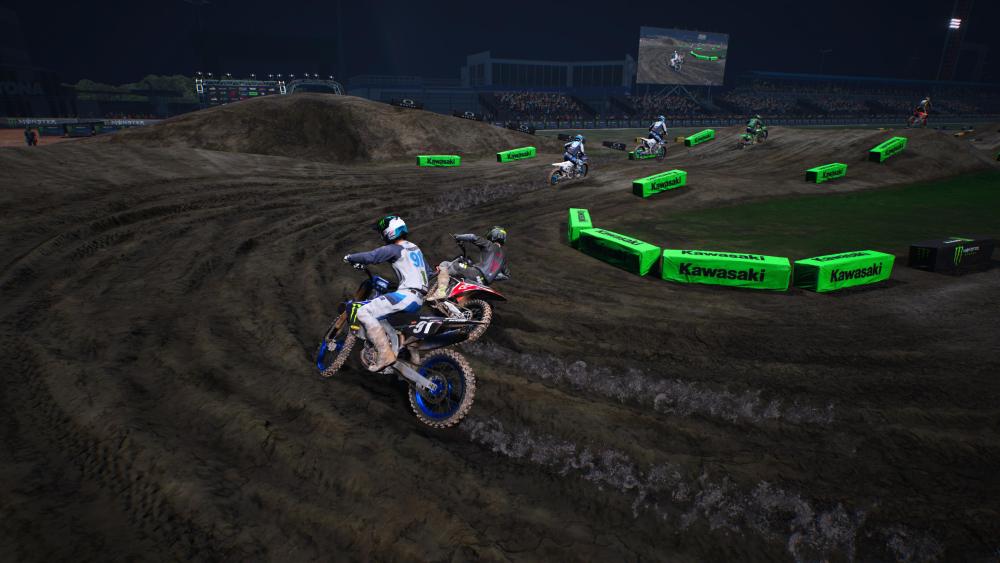 Simply put, Monster Energy Supercross 5 is an improvement in almost every way over its predecessor. Although I covered an awful lot during this review, there is even more that I didn’t go into detail about. The track creator is back with new inclusions and improvements. The online suite of offerings are some of the best in the business, and the game also offers the ability to race a full season as your favorite rider.

There isn’t much that Milestone didn’t touch in some way, and almost every improvement can be described as tangible and worthy of noting. If I also take into consideration the new entry level of difficulty that helps make the game accessible to novices, it’s fair to say Milestone is also trying to broaden its audience at the same time it tries to keep hardcore fans happy.

The bottom line here is that I had an absolute blast with Monster Energy Supercross 5, and it delivered an experience that was fun, satisfying, authentic, and addicting. Adding Monster Energy Supercross 5 to your rotation is a must, whether you’re a newcomer, casual, hardcore fan, or just a fan of racing in general. If you have never played this series before, now is the time. If you’re a veteran, your voice is being heard, and you can feel it everywhere in the newest edition of this long-running franchise.