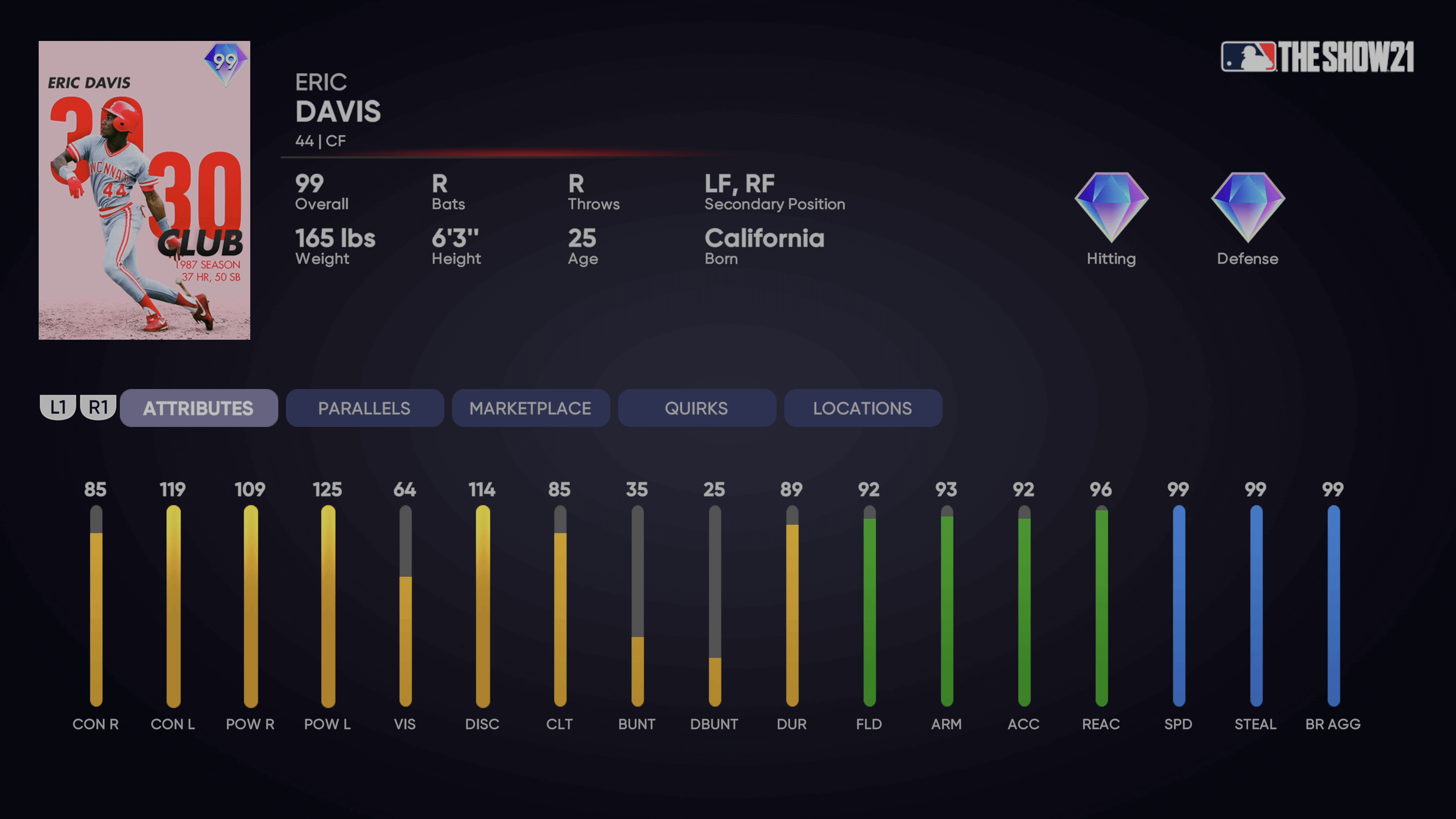 Ranked Seasons 5 is in the past, and the new Ranked Seasons 6 brings about two 99 overall hitters in Milestone Eric Davis and Awards Josh Donaldson. We have seen both players in less powerful forms this year, with Donaldson having a prior diamond and Eric Davis having a prior silver version. At first glance, Eric Davis looks slightly more intriguing, but I’ll get into both in a bit. The other two new diamonds at the Pennant Race level are a Milestone Jay Buhner and Awards Eric Hosmer.

By the way, you now need 30 wins not 40 to get the World Series rewards.

New Ranked Seasons #6 Reward – 💎 Milestone Eric Davis!
When Eric Davis joined the 30/30 Club he did it with 50 stolen bases and 37 home runs for the season. Good luck catching him. LIVE NOW in #MLBTheShow 21! pic.twitter.com/3cisGwvsnO

Starting with Milestone Jay Buhner, I was a big fan of his silver card earlier this year. I really like his swing plane, and he really seems to be able to launch some mega home runs. Here you’re getting more of what you should expect from a Jay Buhner card: major power and ownage of left-handed pitching. He also has a 98 arm to go with other solid fielding stats, so he should be able to credibly play all three outfield positions. His vision is only 71 and the speed is 48, but he’s a quality right-handed slugger.

With Awards Eric Hosmer, it’s always slightly weird for the more contact-driven, defense-boosted 1B out there. I end up using these sorts of players because they’re relatively unique at 1B, but I don’t think this card is anything special in the grand scheme of things. He has 92 fielding, 92 accuracy, and 88 reaction. Still, he’s not the best defensive 1B in the game, which means he’s not as unique to me as someone like Awards Roberto Perez last month — who was a clear top-end catcher on defense. You get 116 contact vs. RHP and 91 vision, so he’s an interesting option for the two hole, but he’s also only got 51 speed. All in all, probably a weaker card than Buhner, and probably not someone you will find in most any lineup.

These two rewards don’t come with quite the same sticker shock as Lindor and Verlander last month, but they’re going to be nice additions to the game. Milestone Eric Davis looks like a scary card if you can deal with his stance. He has 125 power vs. LHP, plus incredible fielding, and then 99s across the board for baserunning. The contact vs. RHP is 85 and his vision is 64, so there is some boom-bust potential here, but it’s an incredibly good five-tool card. But, again, you have to come to grips with that stance or just avoid him altogether.

With Awards Josh Donaldson, you’re banking on a high-end swing to help soften the blow of only being a 3B on defense. He has better all-around hitting stats than Davis, and he has 82 vision. However, his fielding is not quite in the same elite category as Davis’ is in the outfield, plus Donaldson’s speed is just 52. I do think there is a case to be made for either player, but this one is just going to come down to who you like more because there’s not enough here to really separate them to a large degree.

In terms of bucketing each player, Eric Davis is probably the new best center fielder in the game if we go by primary position. He would beat out the Milestone Matt Kemp card for me. However, we have so many new Team Affinity cards coming this week, it’s hard to know where Davis will be after that content drop. With Josh Donaldson, he’s still behind Milestone Mike Schmidt, and I think you can still make a case he’s behind at least Awards Chipper Jones and probably even Awards George Brett — albeit that one is closer.