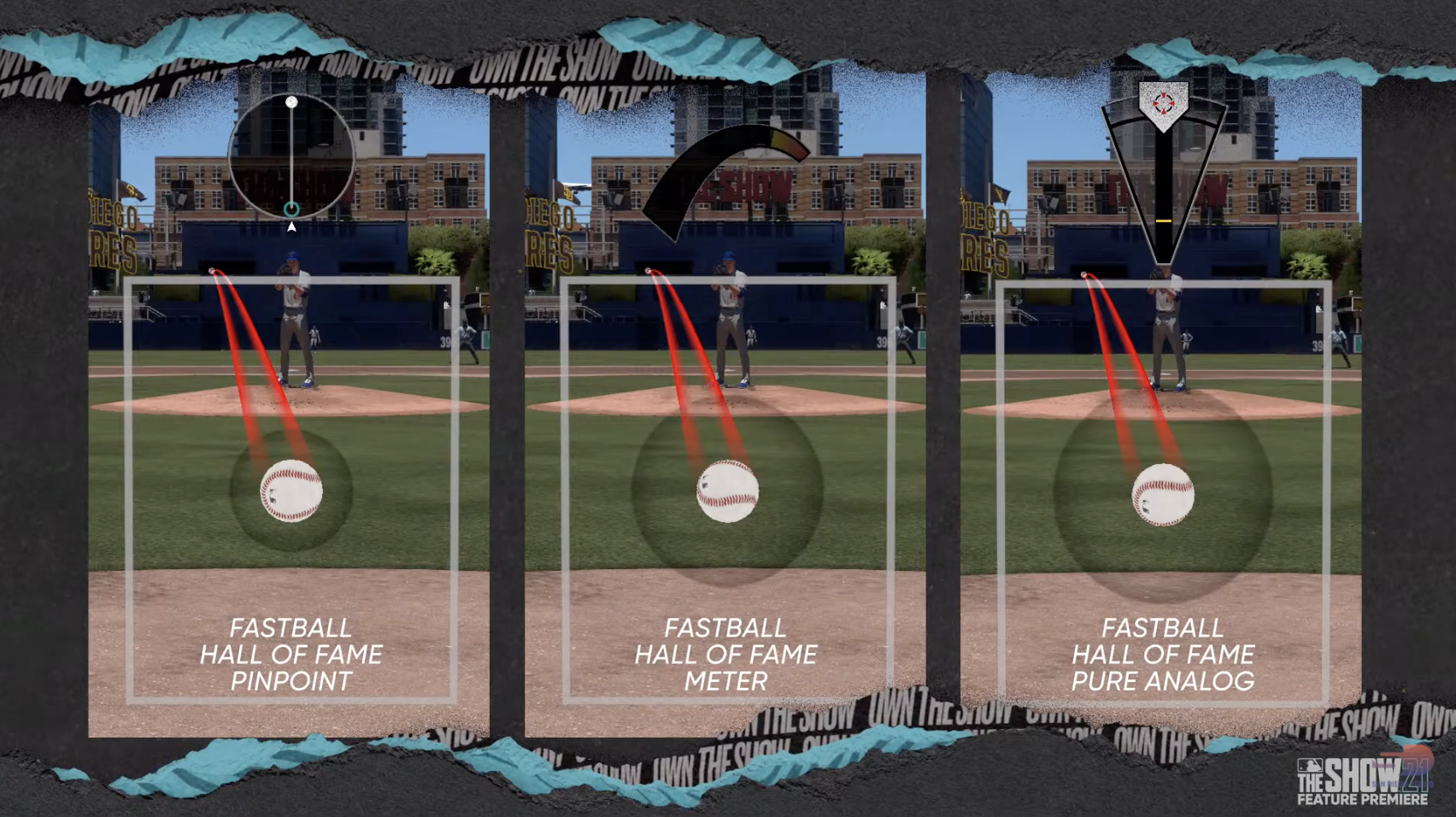 On Thursday, San Diego Studio released its first feature premiere for MLB The Show 21. This first edition highlighted changes to the hitting engine, changes to pitching mechanics, execution results, as well as general quality of life changes to ensure the game plays as the developers intend it to. A big focus for this year’s game is listening to the community and building out pieces of the game that support feedback received from players. This starts first and foremost here with the concept of “PAR” and perfect-perfect pitching.

With MLB The Show 21 coming to Xbox consoles for the first time ever, there are going to be more new players jumping into the franchise than ever before. Because of this, developers put an emphasis on adding a new onboarding experience with the expansion of the Casual gameplay style. This mode will be for those who want to pick up the game and mess around with learning how it all works. The AI is turned way down, so if you’d like to learn how to steal a base or take the extra base on a gap shot, this will be the area to figure it all out.

Simulation gameplay style is the traditional offline style many Operation Sports players have been accustomed to in the past. The mode is authentic to the MLB experience and leans heavily on team and player ratings to determine outcomes for in-game situations. User input will have a lot to do with pitching and PCI inputs while hitting, but player ratings well certainly help buff out the edges in mismatch situations between pitcher and hitter. In short, think of this gameplay style as still leaning on the “RNG” components a bit that are inherent to baseball, and you still accentuate the player ratings a lot as well. 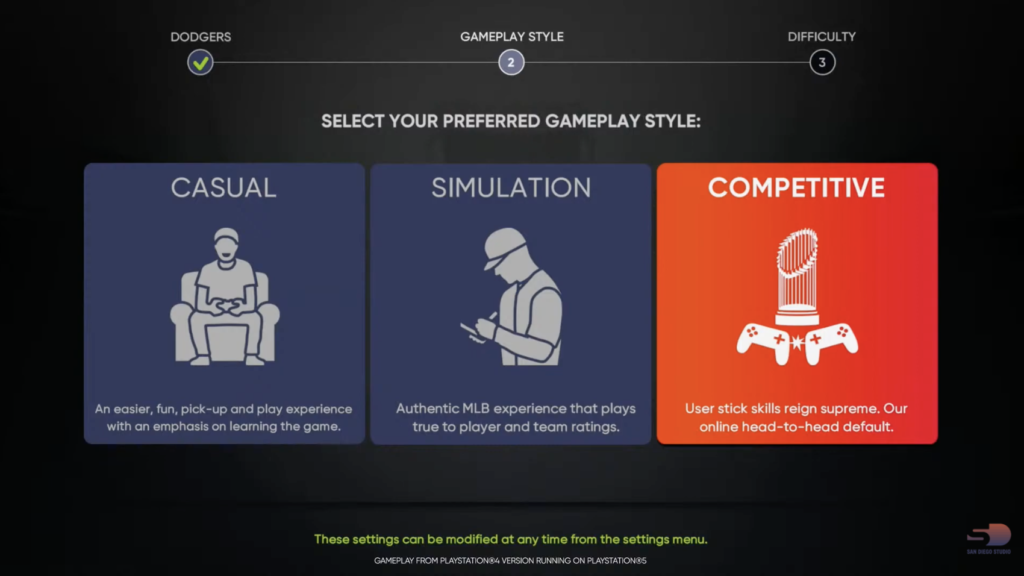 The new Competitive gameplay style will be the default for online play, and it will be anchored by user input. Stick skills will be the catalyst for almost all outcomes here. In this style, inputs on the pitching meter and PCI will have a far greater margin for good and bad outcomes. These modes will actually change the gameplay engine and surrounding aspects as well. For example, wind will be taken out of the equation in all situations now (not just online play) if you go with the “Competitive” gameplay style. pitchers who have low energy will fail more often than they would in Simulation vs. Competitive.

One other small quality of life change coming to MLB The Show 21 is the dynamic difficulty starting point. This year, users can now start their difficulty at a certain level, and then select dynamic difficulty to go with it. This will stop the veteran players from having to beat up the CPU on beginner and rookie modes at launch until they’ve reached the desired difficulty level they should be on.

Check swings were a big point of emphasis here. We recently talked in-depth about them as well, so it’s good to see changes are coming here.

Tons of time went into check swings. Kyle Saul, lead gameplay designer admitted in the feature that check swings were too generous in 2020 — and only got more generous as the year went on after tuning/patches. The discipline attribute has been removed from the equation entirely this year and your controller input will now reign supreme — this applies in both the Simulation and Competitive gameplay styles. Also of note, check swing animation feedback will now be more accurate to both pitcher and hitter. So you should have a reasonably good idea of the outcome from both sides of the coin without the need for a blind first or third base umpire.

In terms of the hitting engine, it sounds as though the major outcomes from 2020 will remain the same headed into 2021. Saul said the team was very happy with the outcomes that spawned from their brand new hitting engine last season. There were still changes made to hit timing, but it seems like these were tweaks that you will notice more when simply playing the game rather than a major overhaul to any one mechanic. (Tweaks to baserunning and bunting were also mentioned but not elaborated on as of now.) 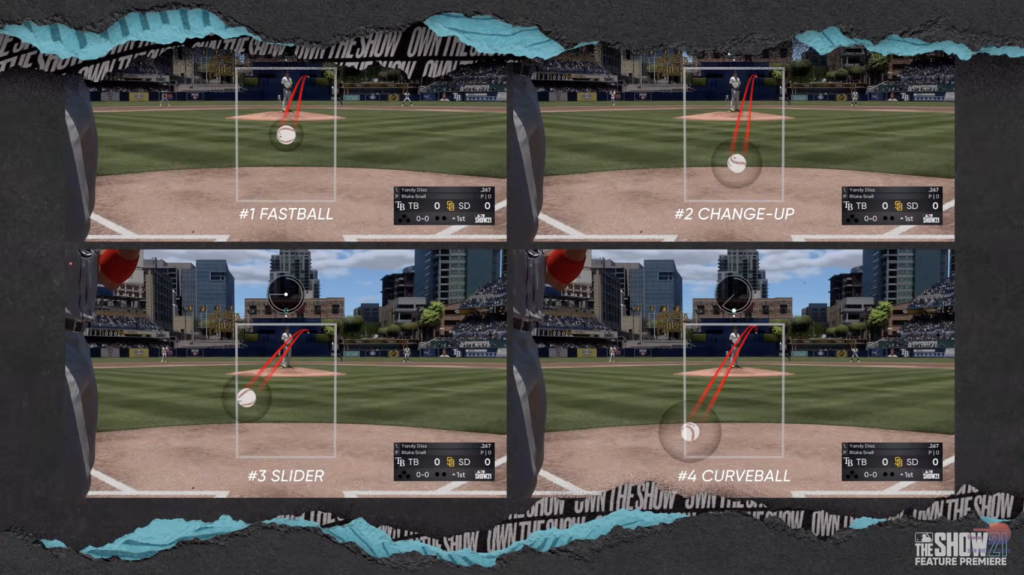 The big talking point for this week was the “Perfect Accuracy Region” (PAR) mechanic. This new pitching tool will show users where they can expect a specific pitch to end up, so long as they achieve a perfect accuracy input. Gone are the days of trying to throw a curveball in the dirt, only to serve one up at the knees. At least we hope. What this pitching mechanic sounds like is one part MLB 2K, one part PGA Tour 2K, and one part Skate.

The feature is reasonably straight forward. Based on a number of factors (pitch selection, pitcher stamina, pitcher control, pitcher confidence, etc.), the perfect accuracy region will appear after selecting a pitch. This dark circle represents the area your ball can end up when your pitching input is perfect. If you do not achieve a perfect input, the outcome of your pitch will vary. It’s worth noting that the dark circle does not mean the entire baseball would end up in that region in perfect-perfect scenarios, rather at minimum a piece of the ball will touch that dark region.

All the different paths you'll have to make with pinpoint pitching on MLB The Show 21 pic.twitter.com/23jQYK1CIQ

The PAR mechanic will also reward players who challenge themselves with more difficult pitching inputs. New this year, the “Pinpoint Pitching” system will feature the smallest perfect accuracy regions as it is the most difficult mechanic to master. The second-most forgiving mechanic will be meter pitching, followed by pure analog. Pulse pitching still exists as well, but since this mechanic already used a dark outline around your pitch as you executed it, not much needed to change there for it.

For online play, there will certainly be benefits for those looking to challenge themselves on the mound.

A look at the pitch analysis you will see. #MLBTheShow21 (grades for gesture, timing, direction) pic.twitter.com/EVxS3hMA10

The “Pinpoint Pitching” system is a complex user-input mechanic that figures to challenge players all season long. It relies on the user landing timing patterns in the form of a stick gesture, a release timing trigger, and the direction of that release. It also ties into being in the stretch or not, and the pitcher’s overall wind-up. It’s tough, for sure. The timing is different for every pitcher, and pitch cadences are all different too.

For more information on how the mechanic specifically works, I’d encourage you to take a look for yourself.

Elsewhere, practice modes have improved.  You can now force pitch type and force pitch location if you’re looking to focus on practicing on a specific weakness of yours either at the plate or on the mound. You can still change camera views and difficulty levels in these practice modes as well. 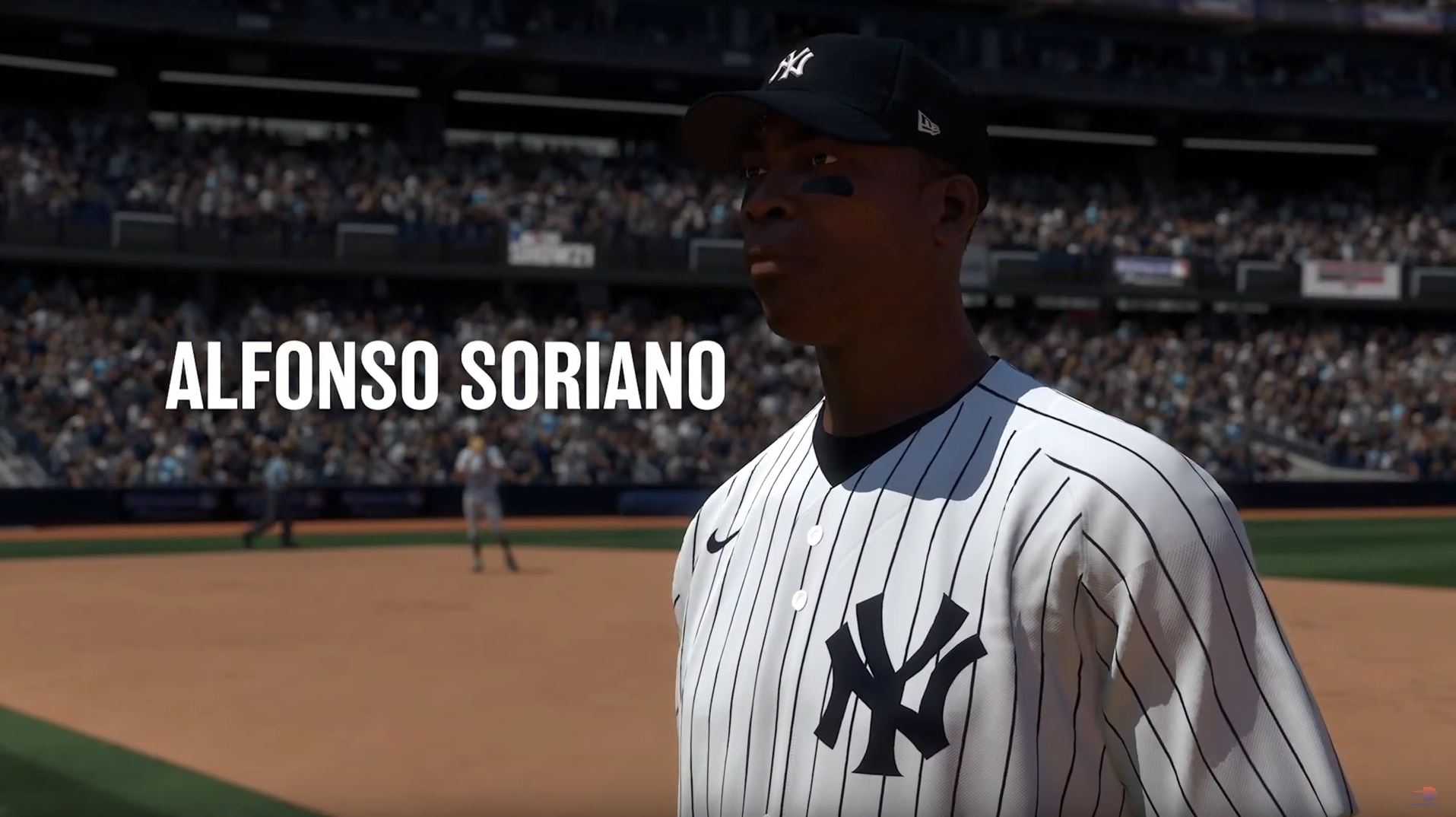 Finally, we got our first taste of the new legends coming to MLB The Show 21. Alfonso Soriano will be in the game. Interestingly, San Diego Studio teased the number “2” a LOT on the infield in this reveal before the entire number “24” for Soriano was finally revealed. Were they trolling fans, suggesting Derek Jeter was coming? Is it a lead-in to a Jeter reveal in the future? We’ll see…

You can watch the full feature premiere from SDS at these three locations:

Discussion
Click here to reply to the discussion
Continue Reading
You may also like...
Related Topics:baseball, mlb the show 21, san diego studio, spotlight