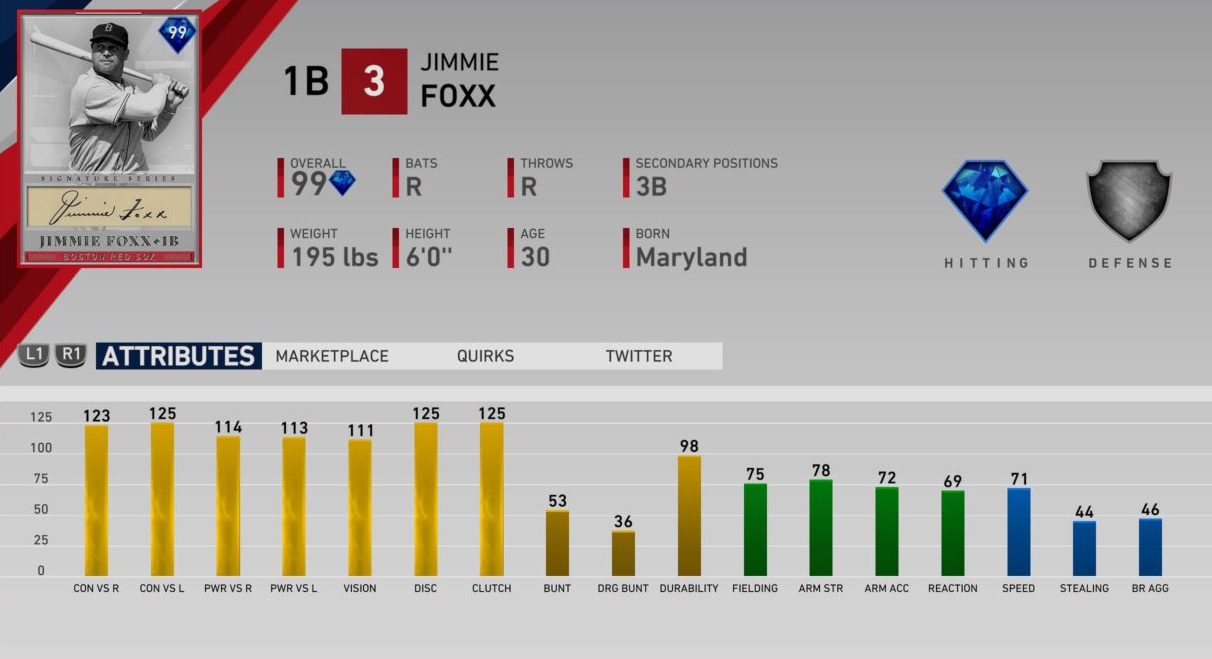 We got the fourth Signature Series card today, and as expected it is a Battle Royale Flawless Reward:

Jimmie Foxx is another Show legend, but this is one of those cards that won’t be very attainable for many unless you can go 12-0 in BR, or you have some extra funds to spare in the marketplace.

This is a great card, obviously. He probably becomes the top right-handed hitter at 1B, and he can at least survive at 3B if need be. His 71 speed also means he’s not a total mess on the basepaths, which should not be overlooked at this point in Diamond Dynasty. I would not have been shocked if his power was even higher, but in general, I can’t really find any reason not to want this card.

As for its availability, I’m all for certain cards being almost unattainable for some. Foxx should look special on a team, and having cards like this be very hard to get without top-tier skill or plenty of Stubs keeps teams from all looking the same. 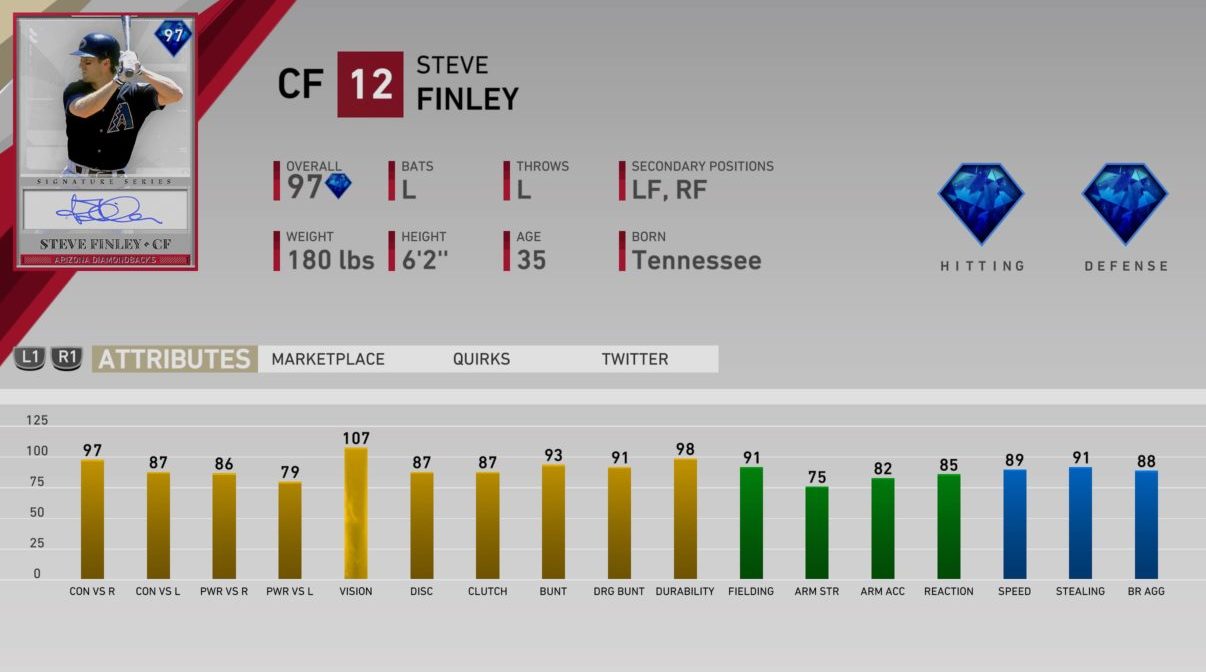 We also have the attributes for the other three Signature Series players since they’re now live in packs.

Starting first with Steve Finley, this is the card I was most looking forward to based on my history using other versions of Finley. It’s….okay. The thing about all Finley cards is they play above their ratings. Now, for a 97 overall, you might expect to see stronger stats, but center fielders in general have mostly underwhelming stats. He has certain attributes that somewhat “falsely” raise his overall to 97, but he’s still a diamond fielder and hitter. I still have all the confidence in the world in this card. I believe it will be a monster. 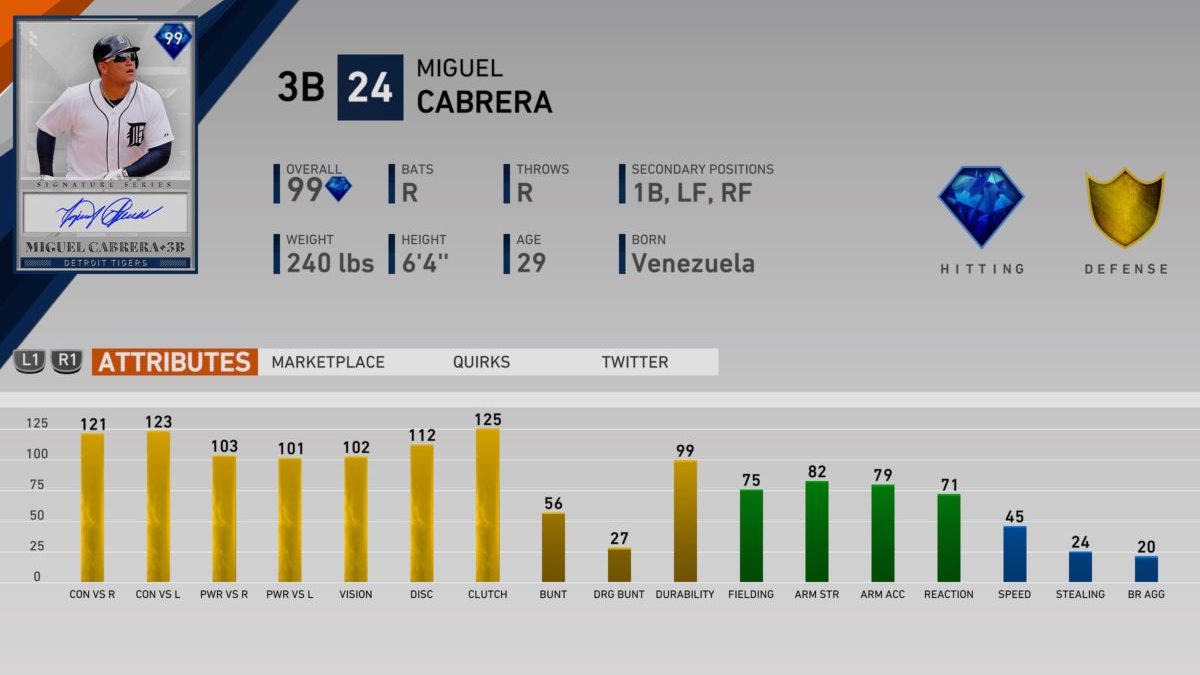 Miguel Cabrera has some optionality in the field, and his gold defense is better than I expected. His 45 speed also isn’t completely debilitating. Since the defense and speed are really the only concerns to ever have with a Cabrera card, this automatically becomes an option at 3B and beyond. He basically has maxed out contact, and his power is plenty good enough to play. I love this card. 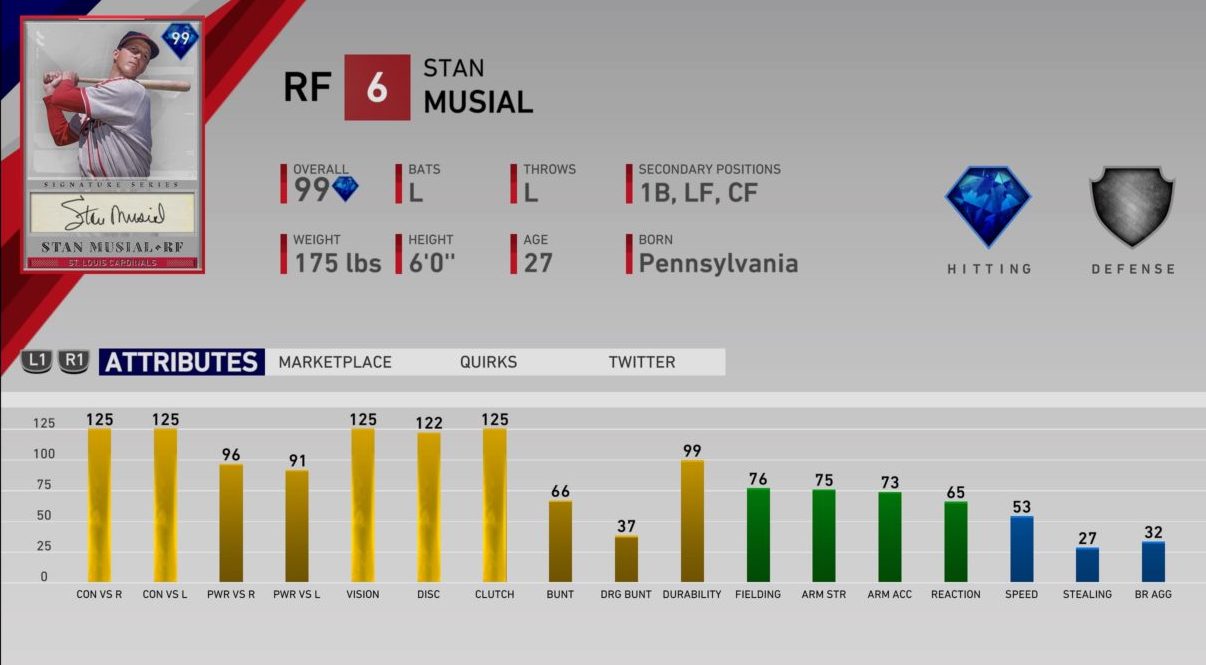 Stan Musial is the only card of the three that is only available in the rare round of the Signature Series pack. As expected, this card got maxed out contact ratings, but I don’t know if I love this card as much as the others. The ratings are great for contact, and he still has enough power, but it’s a really hard field to break into when it comes to the outfield. His speed only being 53 means his contact ratings don’t play up as much either. The silver fielding also stands out, but in the outfield I still don’t worry too much about that. That being said, he doesn’t excel anywhere in the field.

I’m in no way saying I wouldn’t take this card in a heartbeat, it’s just that it being in the rare round of the pack means I don’t know how hard I would chase it. There are just so many options that are at least comparable to this card.

If you still need stars for the 9th Inning Program, there are new 9th Inning Moments today as well, so just a heads up there.