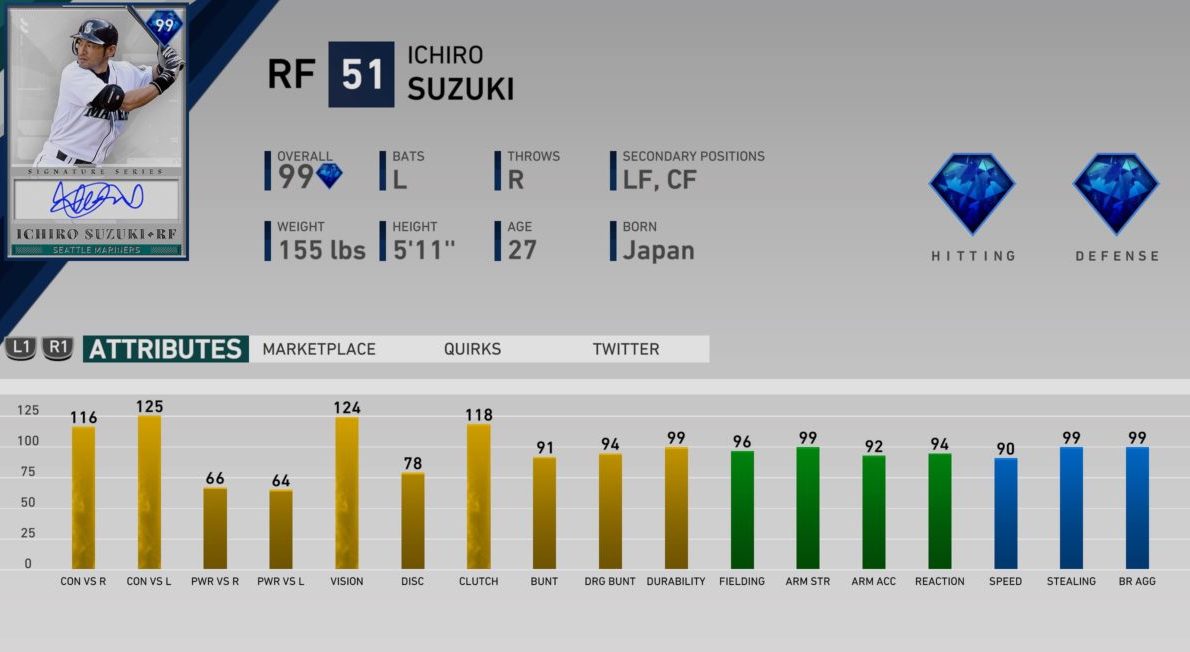 Ichiro has arrived, and as it sort of became clear yesterday, we are getting him via Moments challenges. As an added bonus, he’s part of the 10th Inning Program rather than being in the Storylines tab, so he will also add Stars as you chase down Trout, Pujols and Schmidt.

First off, one more look at the card you’ll be chasing if you want to knock out the 10-plus challenges to acquire Signature Series Ichiro. The card art is a little disappointing as Ichiro is most known for that iconic way he holds the bat out towards the pitcher’s mound before getting set to lace another hit into the outfield.

We talked a bit about the card yesterday, but there’s no reason not to point out the 116 contact vs. righties and 125 contact vs. lefties to go with 60-plus power from both sides of the dish once more. With 91 bunting, 90 speed and 99 stealing he will be as evil as ever on the bases. And finally, he has 99 arm strength, 92 arm accuracy, 94 reactions to easily place himself in the competition for best defensive outfielder at any of the three OF positions. 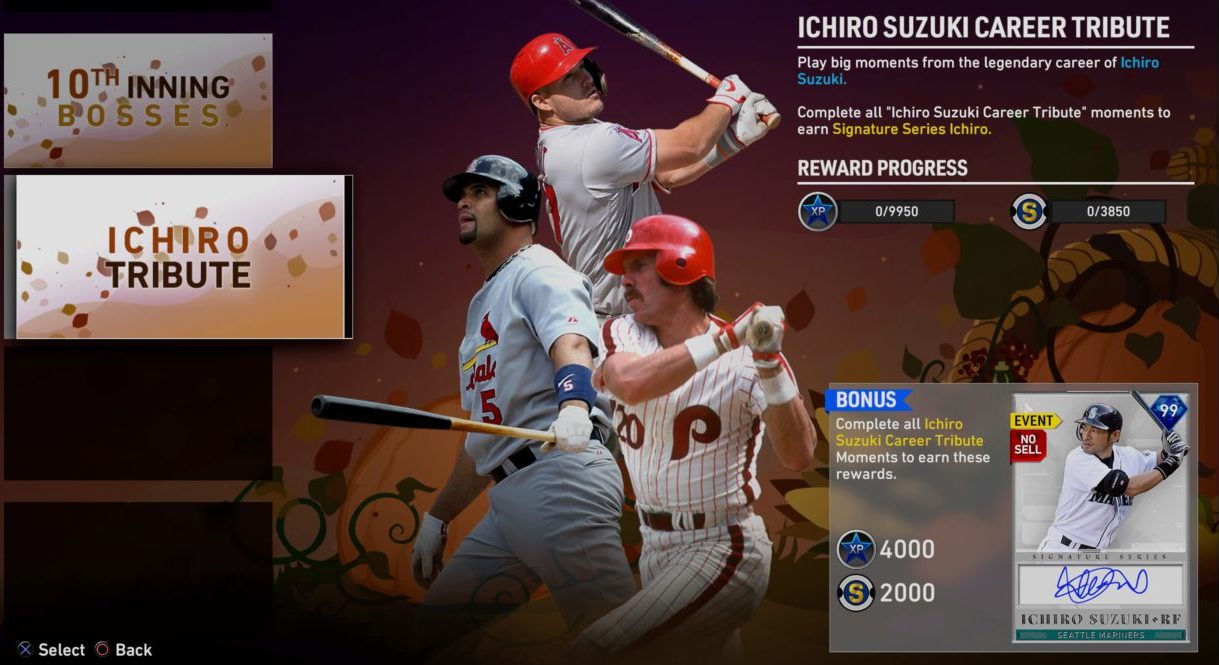 The challenges can be found in the 10th Inning Program, or by going to the Moments tab and finding them that way. You will get 2,000 Stubs and 4,000 XP as a bonus on top of the card, not that those sorts of extras really do much to move the needle at this point in the cycle. There are over 10 challenges you will have to complete to get this Signature Series Ichiro, and the challenges span from his rookie season to his final at-bats in the majors.

The key thing here is you always get to use his 99 overall card in all of the challenges, rather than using weaker versions when you’re using him on the Yankees or Marlins. I don’t know if that’s The Show developers being nice to us, perhaps a little mistake, or maybe a little from column A and column B, but hey I’ll take it. Moments can sometimes be incredibly difficult even on Rookie and Veteran, so I’m sure everyone else out there will be happy to take the cookie as well.

With the challenges being a part of the 10th Inning Program, this also means you’re gaining Stars for every challenge you knock out, so this is basically a two-for-one in terms of getting Stars and also making your way towards two awesome 99 overall cards. The challenges will range from 3 Stars to 8 Stars, and of course those breakdowns are tied to the perceived challenge of the Moments themselves.

With the challenges, there’s two that will involve stealing bases, two that will involve hitting home runs, two multi-hit games that also include getting an XBH, and one game where you have to get four hits. The big thing here is the home run games are on rookie, and no challenge is on anything other than rookie or veteran. In other words, you still might get stuck on one or two of these challenges while begging for a specific outcome, but you should be able to grind through these.

One missed opportunity — and this has been the case with Moments in general this year — is there are no defensive challenges here. I’m not sure if it’s hard to easily program the scenarios into this mode or what, but needing to throw out a runner at home or third base would have been enjoyable considering Ichiro’s arm is legendary. 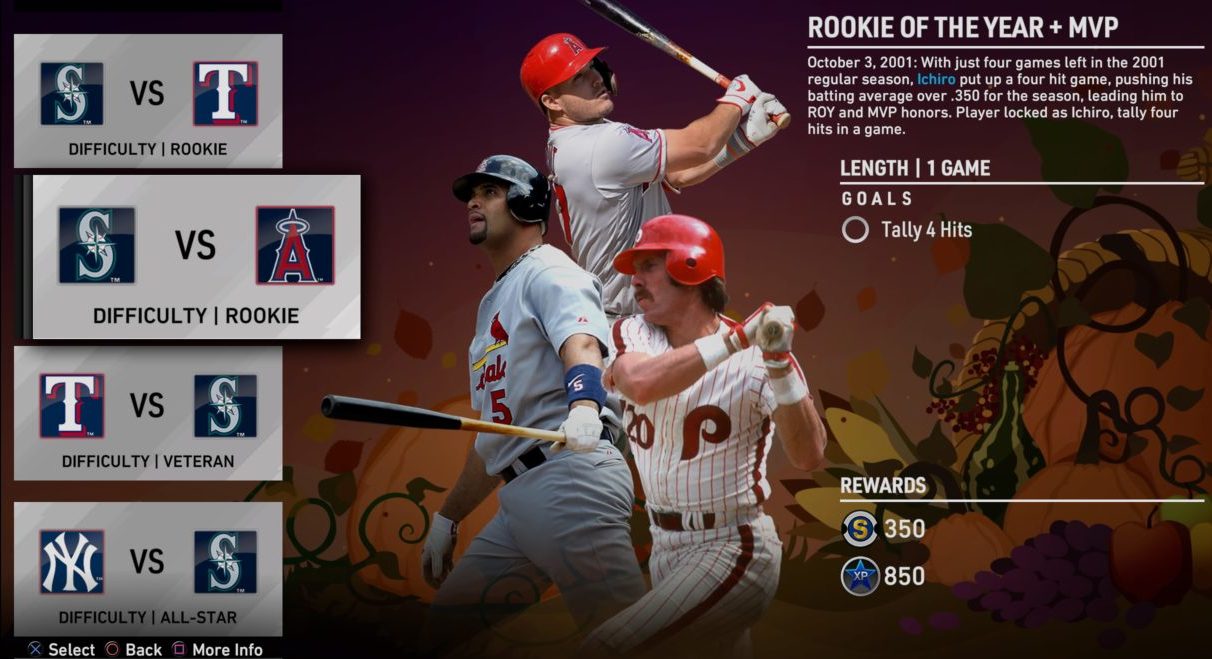 The four-hit challenge is one of the first ones you will encounter, and it’s on rookie. It coincides with his rookie year and ties into him hitting .350 on the season. Yeah, remember when this dude came in and hit .350 and won AL MVP to beat out Oakland-era Jason Giambi? (For the record, Giambi probably did have the better year since he had a 1.137 OPS that year, but considering what Giambi later admitted to, I’m fine with the baseball writers getting this one “wrong” at the time.)

Hey, also remember when Lou Piniella thought Ichiro wouldn’t be able to hit in the majors? To be fair, Ichiro swerved almost everyone as he was notorious for just using Spring Training as a way to work on slapping the ball, but still, bad call Lou.

Oh, and hey, remember also that Ichiro originally signed a three-year, $14 million contract? The Mariners did have to post a $13 million negotiating fee, but what a steal. 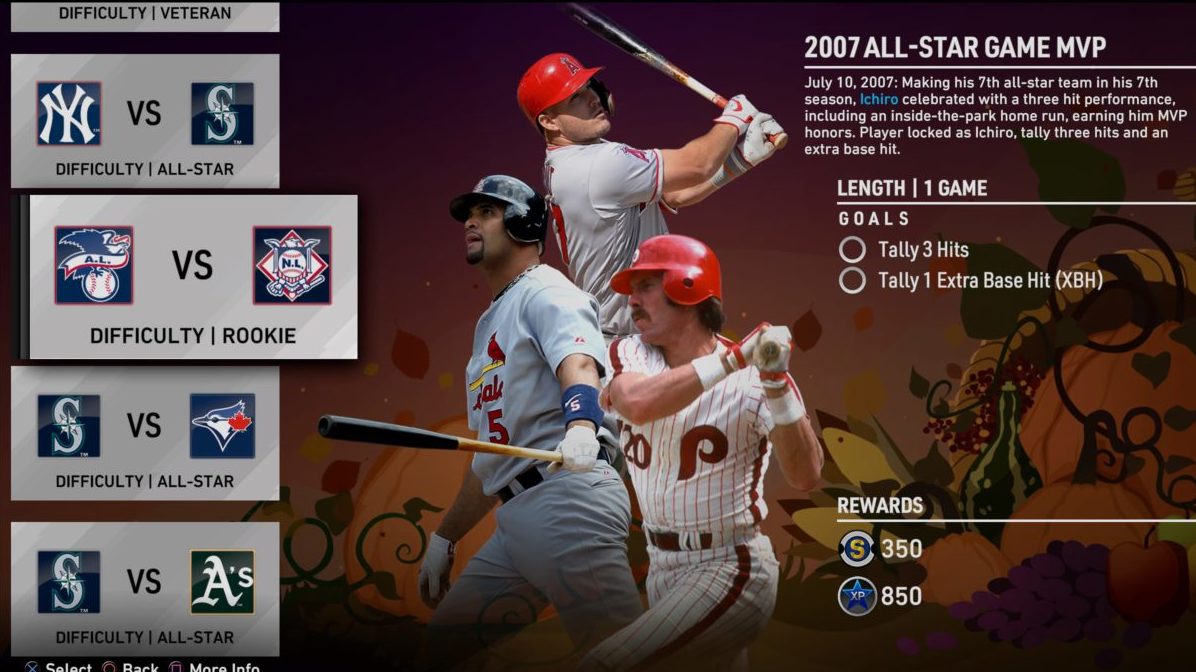 Here is another challenge I will call out as it involves 3 hits, with one being an XBH. In Ichiro’s seventh season and seventh as an all-star, he would yoink All-Star MVP, on top of hitting .350 again while finishing eighth in MVP voting, and getting another Silver Slugger and Gold Glove. 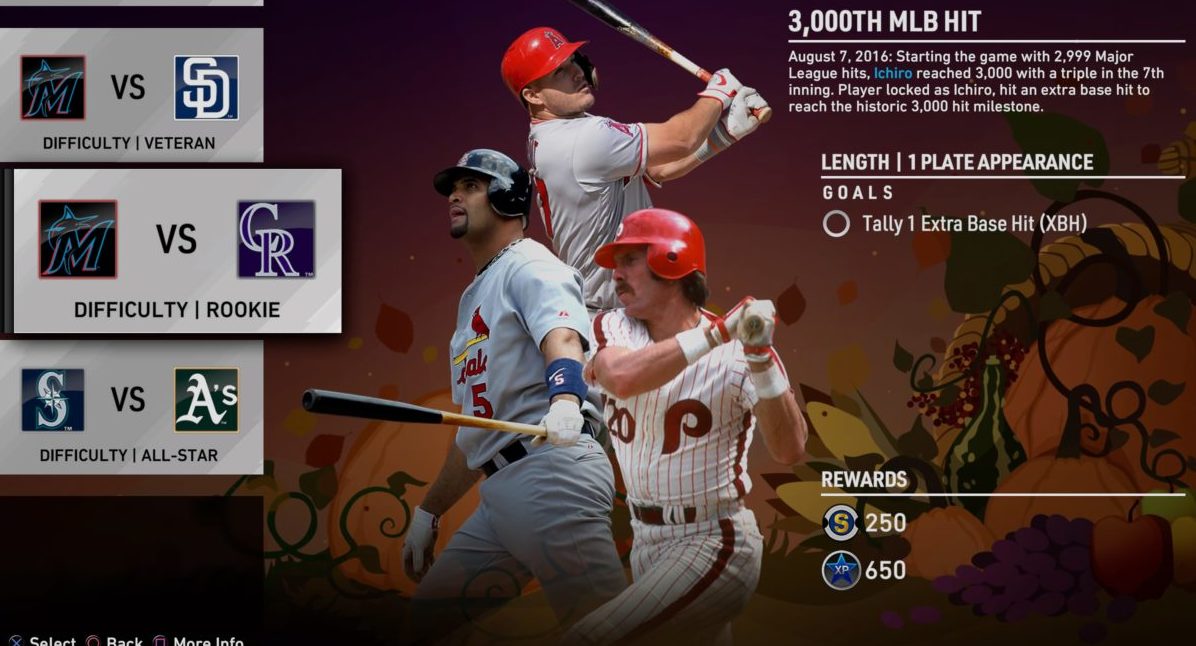 Lastly, I just want to echo one final time that you always get to use Signature Series Ichiro. As I was looking through these challenges, I got worried that would not be the case when getting to end-of-an-era Ichiro. But fear not, I went into a Marlins challenge and Ichiro’s stats were still aces.