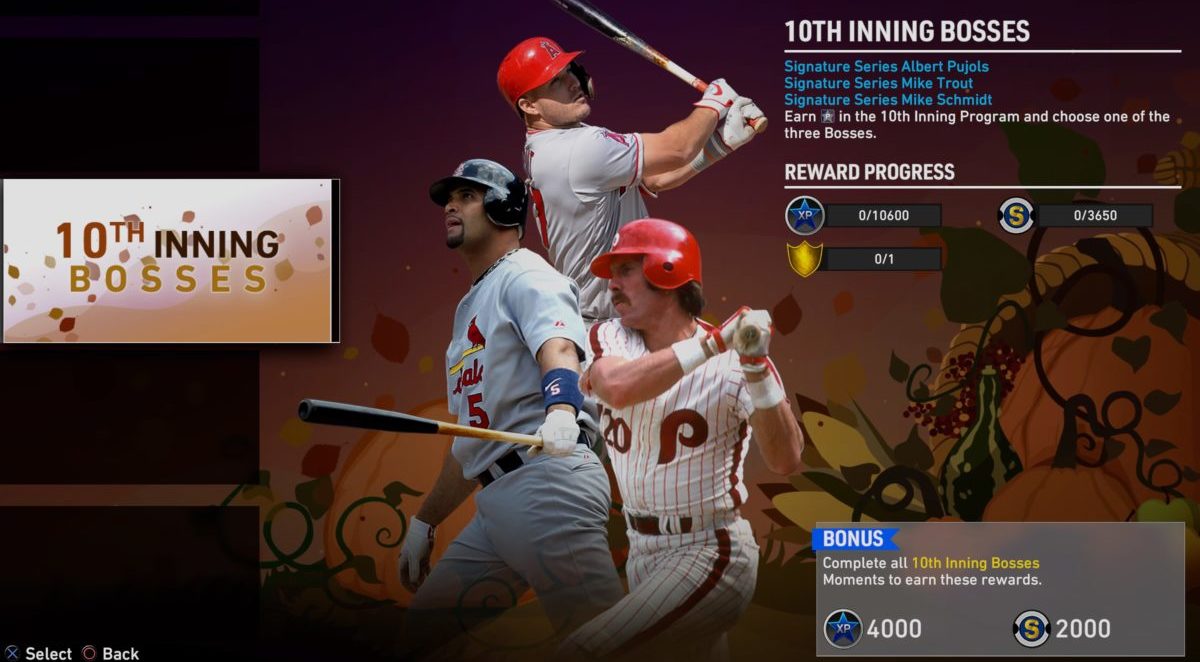 Wowza. In terms of the research I did, these were far and away the three names who popped up the most frequently as requests. I’m going to start with what I think is the crown jewel: 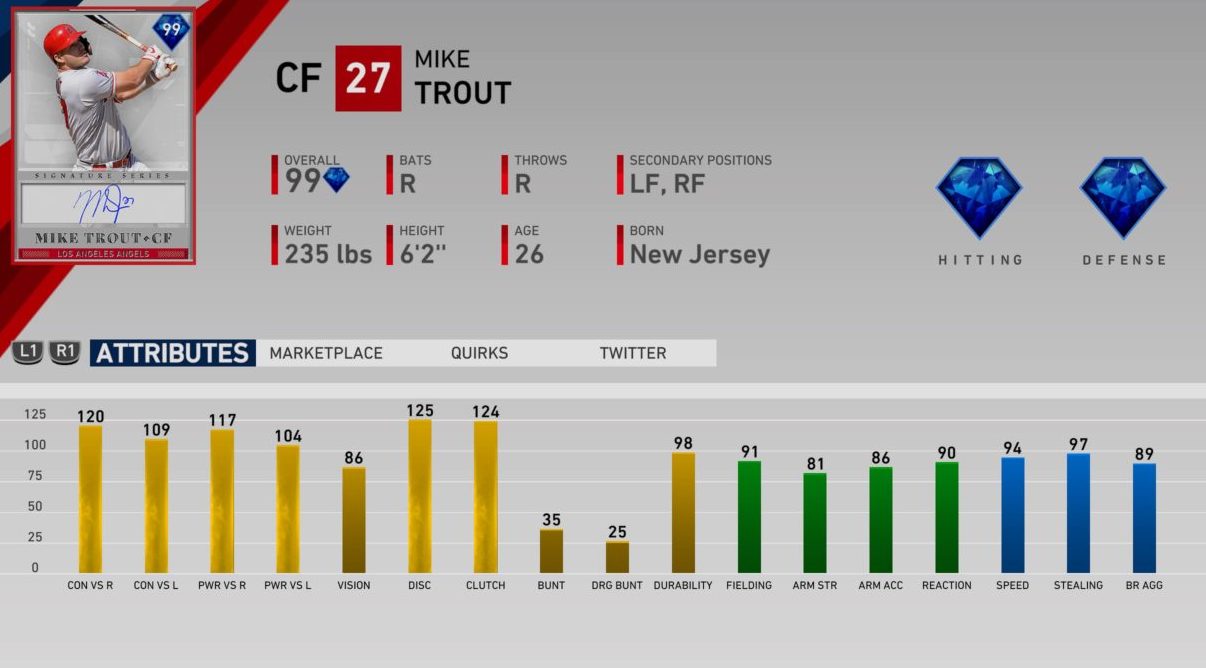 The Mike Trout Signature Series is lethal. The thing that will put this card over even some of the other OF titans is the 94 speed and 97 stealing to go with the absurd hitting stats. I’ll talk about Pujols in a second, and he stays in the conversation as a potential pick, but this Trout card is ridiculous. I know some people will obsess over the vision rating, but come on, you can’t have everything in a card. He is one one of the top four players you can put in the OF now along with guys like Mays, Bellinger and Griffey Jr. I personally go Trout second to just Bellinger because I feel most comfortable with both their swings. 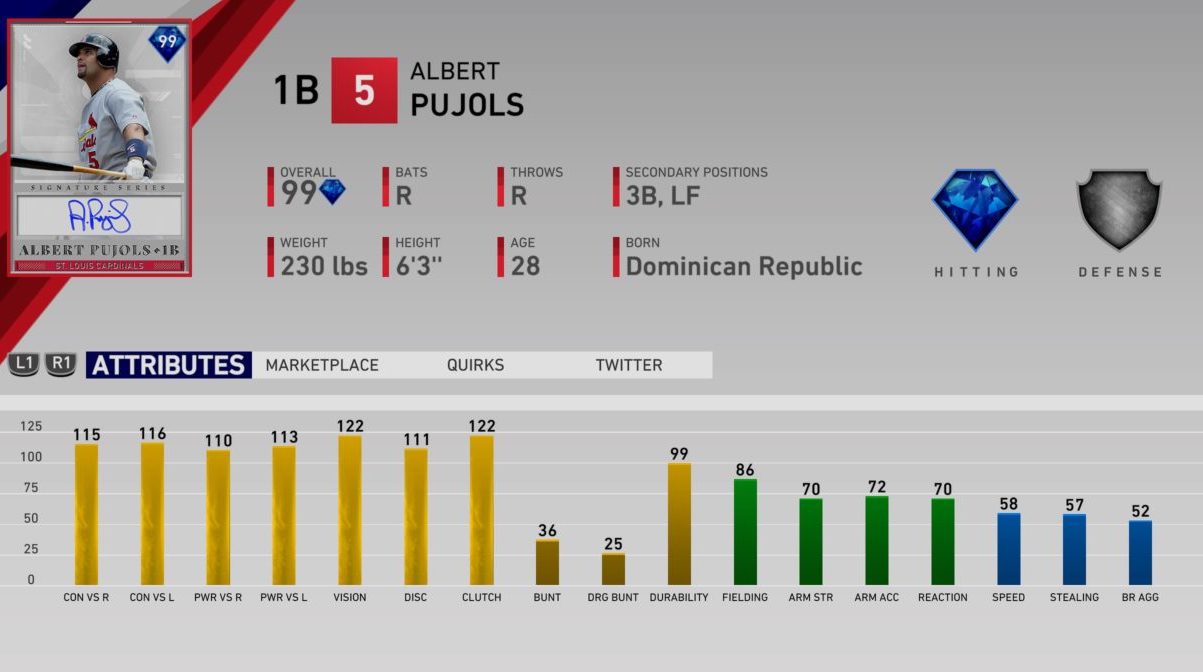 Frank Thomas has his one true equal now in Albert Pujols. The thing with Pujols though is those secondary positions, namely 3B. Pujols is viable enough on defense to move to third if you want to keep Frank Thomas in the lineup, or Pujols can finally move The Big Hurt to the bench and take his spot in your lineup. Either way, the speed at 58 is the one true downside, but otherwise this card just mashes. 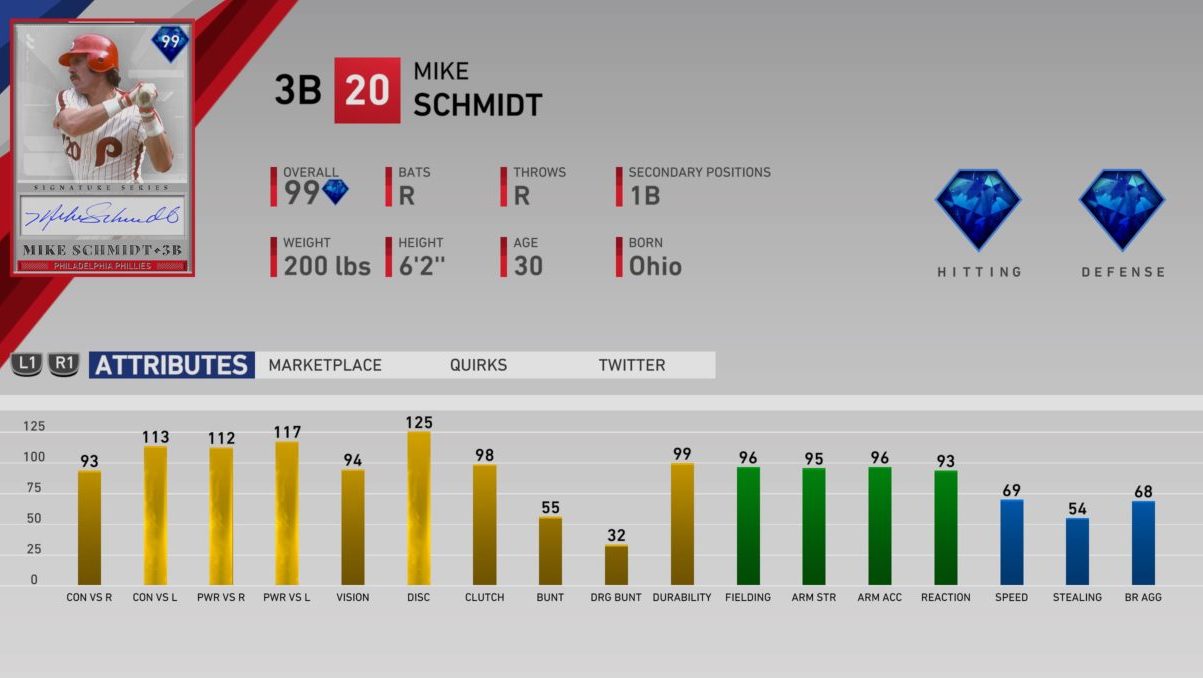 I feel a little bad for Schmidt since he may get a little overlooked with Pujols also getting 3B eligibility. That being said, there’s no questioning this card is great. Is he going to beat out Chipper or Pujols at third for me? No, but that’s at least in part because I just can’t get used to Schmidt’s swing. His power and fielding attributes are still impressive for 3B, and I don’t think he’s the “wrong” choice or anything if you go with them. The great thing about these 10th Inning bosses is they’re all insane — as they should be since Diamond Dynasty season is winding down. 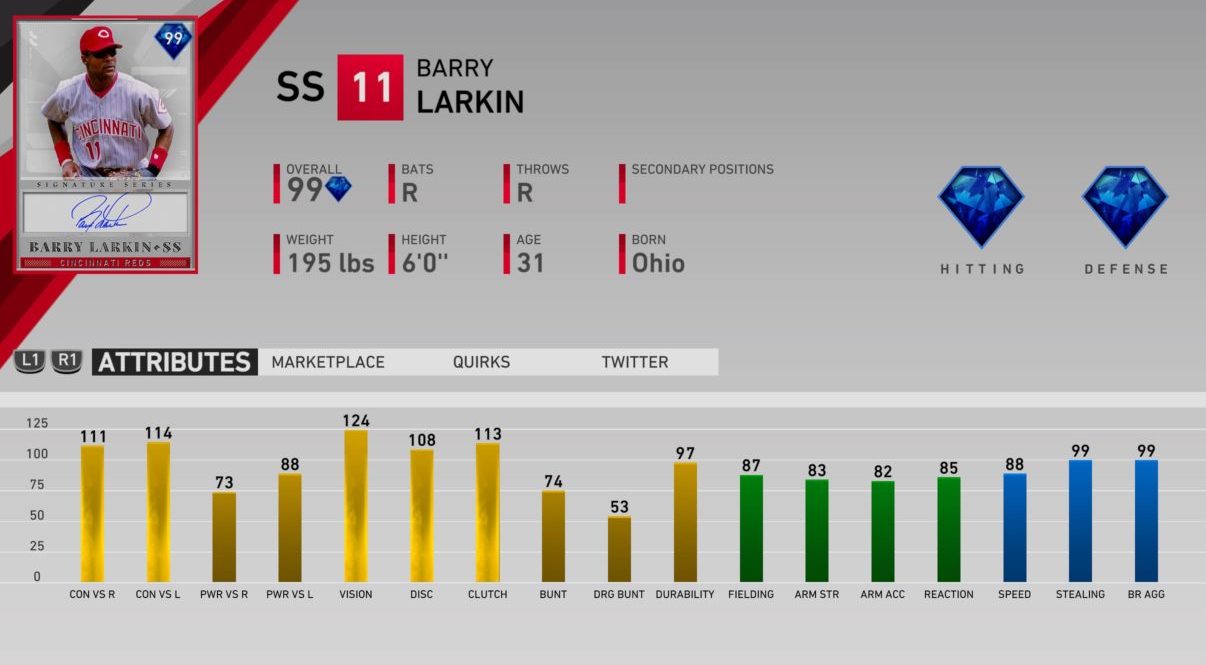 Working backwards to the 200 Star picks, Barry Larkin got the sort of stats I would expect. He will be end-game for true fans, and I get it, but I think shortstop is too tough to break into here for Larkin. That being said, 124 vision to go with the contact, fielding and speed are great. He will put in long at bats, be a menace on the basepaths and make sick plays in the field. As with the 300 Star picks, these 200 Star picks are all killer overall. 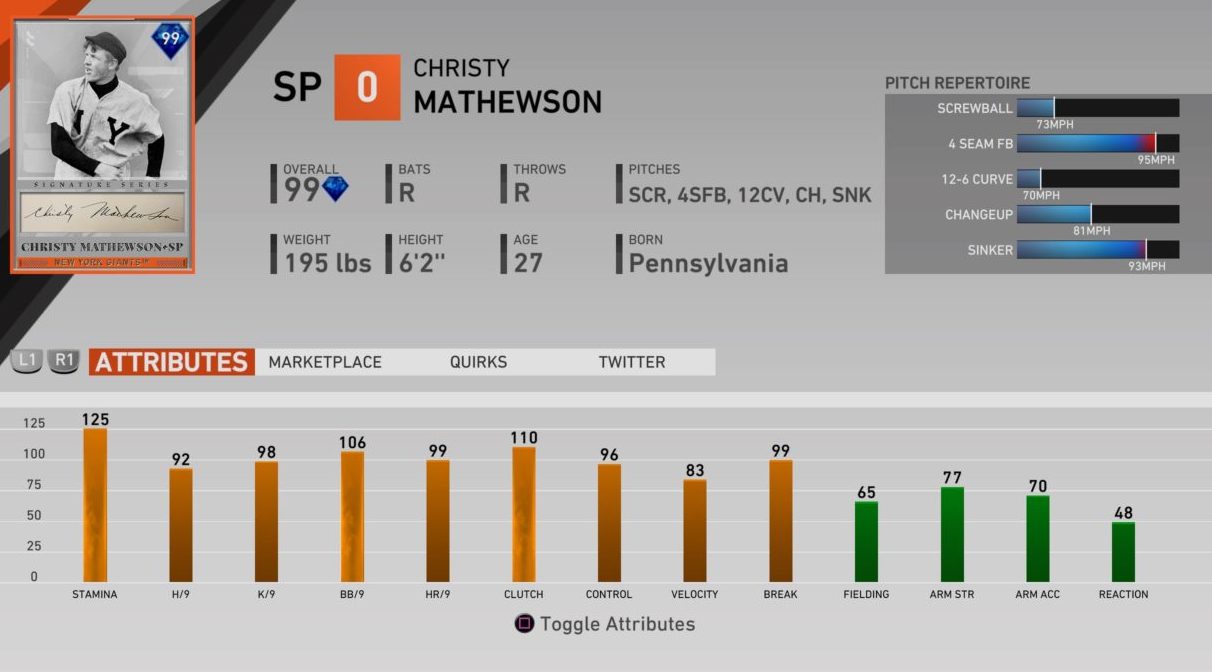 Here is my 200 Star pick. Slow windup aside, Christy Mathewson looks like a killer. 95 mph 4-seam fastball to go with 73 mph screwball, 70 mph curve, plus mixing in a changeup and sinker here and there just to keep people honest. He also has 125 stamina, which is always nice as it keeps your pitches a little sharper for longer. 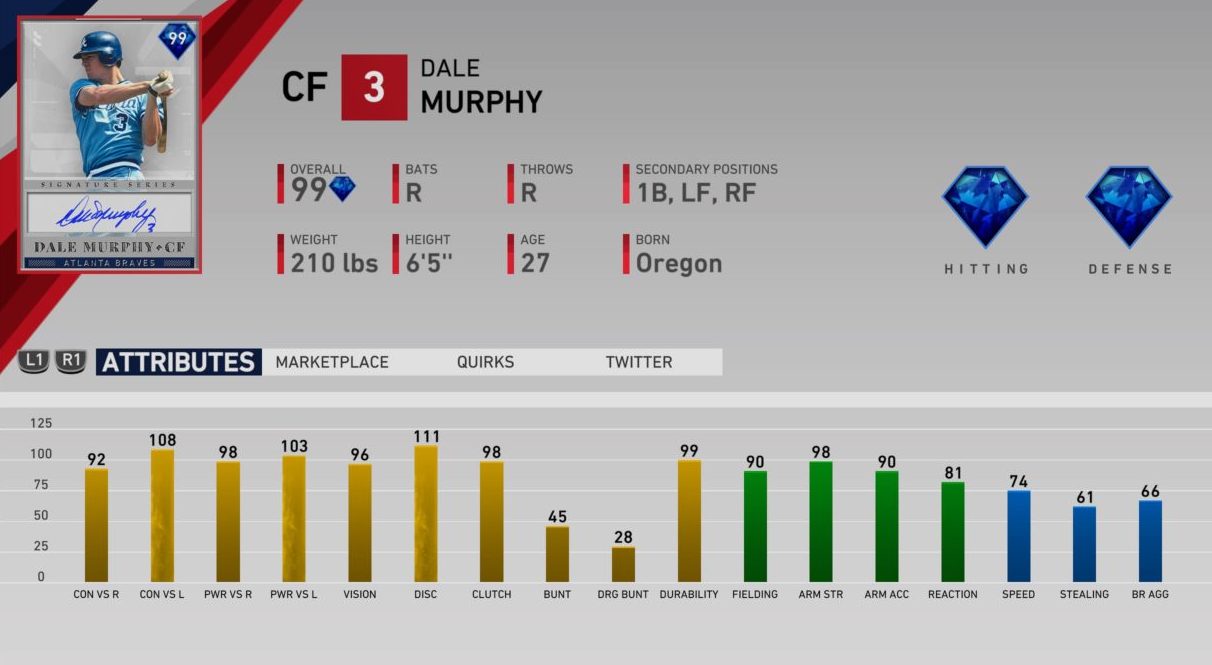 Originally, I thought this would be my pick, but since I would go with Trout at 300 Stars, I don’t feel the need to pick Murphy here. That being said, 98 arm strength to go with very good hitting stats means this card isn’t a bad consolation prize if you want to go with Pujols at 300 Stars. Regardless, there’s really no one else — at least at the diamond level — who is going to give you that kind of arm in center field (as a primary position). He’s a good fielder in general, with 74 speed perhaps the only thing taking a little away from his cannon of an arm.

If things were not nutty enough, the 100 Star pick also includes three enjoyable cards, but I will just highlight the Freddie Freeman because that was another card that many people were asking for in this latest reveal. It’s no slight against A.J. Burnett and Shawn Green, as I love using both those players, but Freeman is the one people have been talking about wanting. 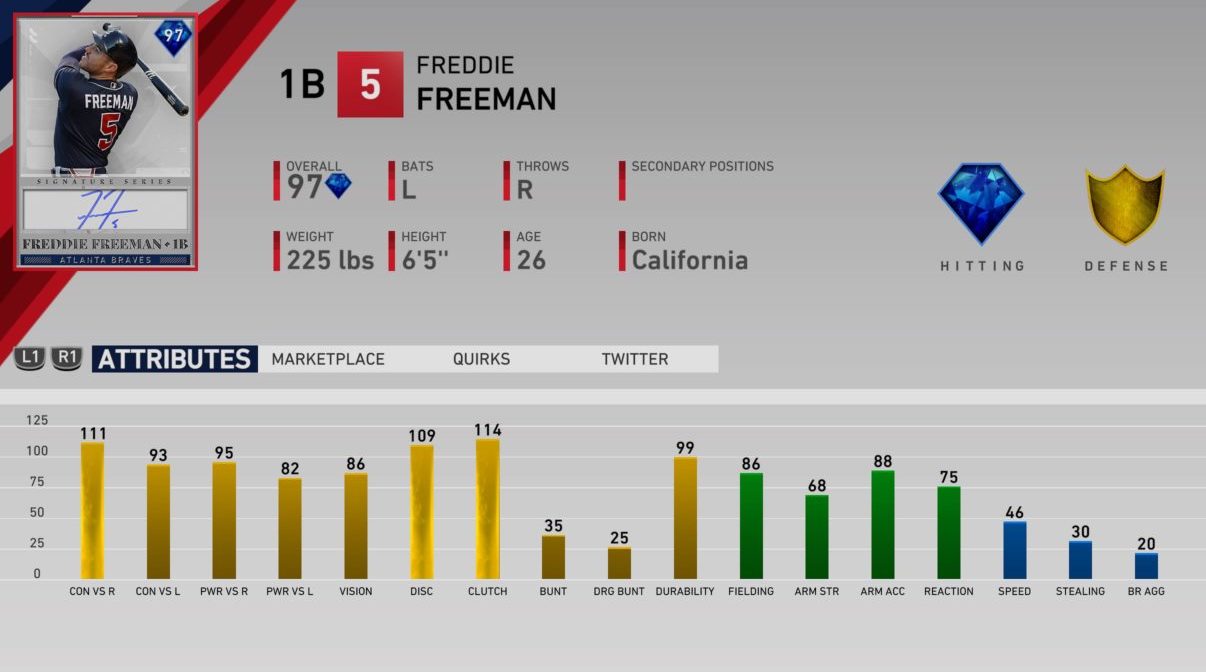 I know Braves fans will still be somewhat disappointed because the developers are giving out 99s like candy at this point, and he’s coming off another great season, but this should still be able to squeeze onto an all-Braves squad. He will have some trouble with lefties at times, and his arm isn’t great considering his prowess at 1B, but this is still a really nice looking card for only getting to 100 Stars. 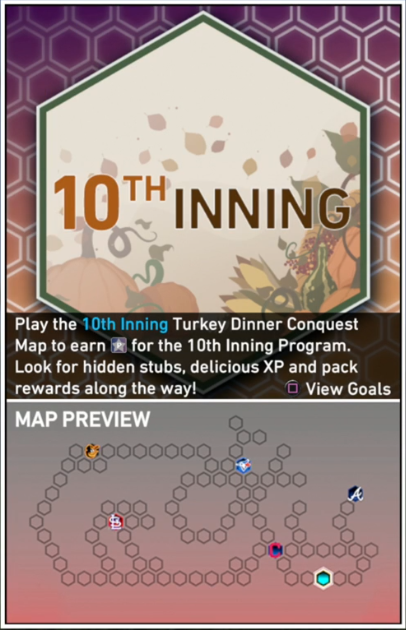 There’s still a ton more to this program, including a new Conquest map. I don’t know what secrets are in here, but if it’s like the rest of the program I would expect some tasty pack and Stub rewards within.

Speaking of the shop, one of my favorite parts of this point in the season is having lots of extra Stubs and not really caring about how I spend them. The Headliners pack is great value and a good time if you’re at that point as well. Getting three Headliners packs from sets 1-25 for 7.5K Stubs is great value by pack standards. It’s a 1:10 you’ll pull a diamond in each pack, and while diamonds are mostly going for 5K quick sells now, again, it’s just a relaxing and fun thing to do if you just want to throw some Stubs away and probably still come out not too far behind.

We also now know there will be an 11th Inning Program. It doesn’t sound like there will be any new bosses or anything like that, but rather this is just going to be a mega program with plenty of ways to get Stubs and more players from old programs. It was stated on stream that there will be 1000 Stars in this program, so yeah, it will be keeping you busy if you want it to once Decembers rolls around.

Lastly, Ranked Seasons got reset, and while there’s no new players, it once again got some favorable updates. Starting at the Pennant Race level, you will get to choose two players from older Ranked Seasons, within reason. So this means you can pick guys like Jay Buhner (95 overall) or Kerry Wood (95 overall) down to older classics like the gold Ken Griffey Sr. card that was littered throughout many Events lineups.

There’s tasty rewards at the Division Series and Championship Series levels as well, and then if you reach the World Series rank you can pick any Ranked Seasons WS reward from any prior season. So this means Babe Ruth, Chipper Jones, Ty Cobb, etc. can all be yours if you conquer the ranked ladder ELO.

All in all, this was a heck of a reveal and there’s a ton of stuff here to dig into if you’re still playing Diamond Dynasty.

(PS, you all should know, but there will be yet another looming market crash with all this content being released. Enjoy your Stubs for what they are and don’t sweat beating the market at this point.)