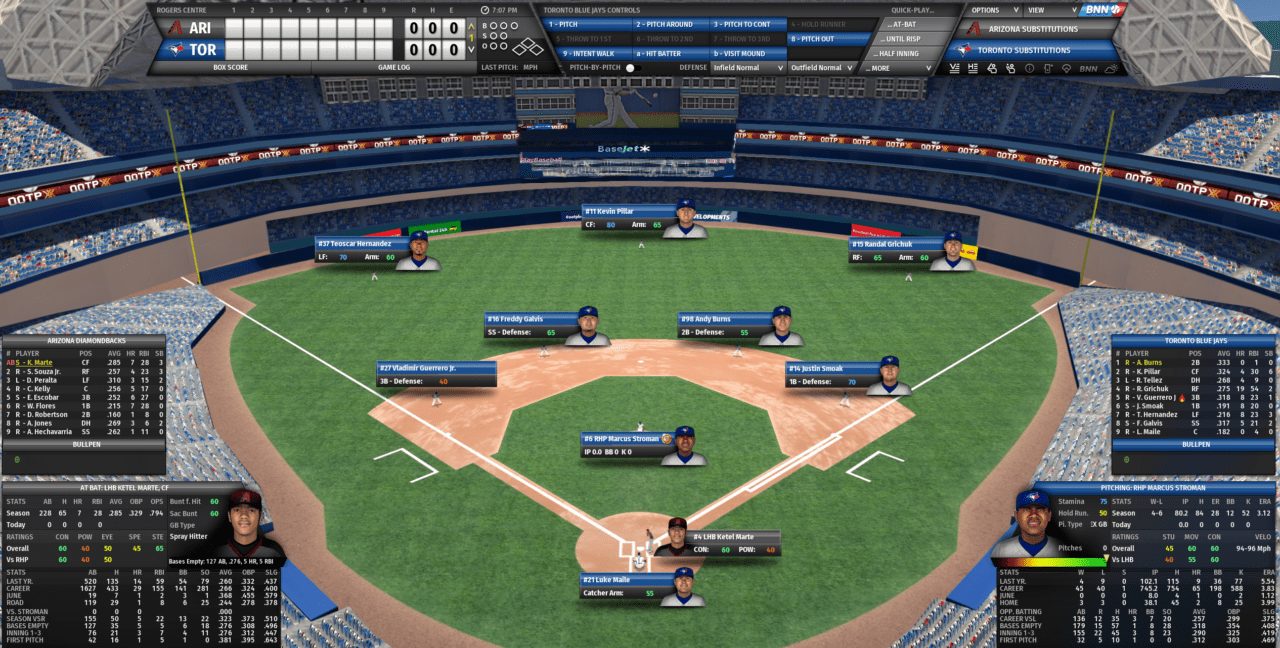 As strictly a console player only though, my options were limited. R.B.I Baseball 19 hasn’t exactly received the greatest of reviews for yet another year, and beyond that, there aren’t really any other baseball games available for consoles. However, I was aware there was another annual baseball game on the market that I was continuously being deprived of by limiting myself to playing only on consoles: Out of the Park Baseball. And I knew that trying out the only other baseball simulation available with a reputation that even approaches that of MLB The Show was going to have to involve expanding my horizons.

In order to try out the newest edition of the Out Of The Park Baseball series, I was going to need to move from the cozy and familiar world of my PS4 and play my first ever actual game on my Mac. To be honest, I didn’t even have a Steam account. To be even more honest, I was so naive about the entire world of computer gaming that I didn’t even know if I could get a Steam account on my Mac. What I learned: I can! And just like that, I began to become immersed in the vast and unfathomable depths of baseball management involved in Out of the Park Baseball 20.

I feel like it’s important to get this out of the way from the start: As someone who’s making the jump from MLB The Show to OOTP, it’s hardly even fair to compare the action on the field between the two games. For one thing, you don’t even really “play” any baseball games in OOTP so much as merely attempt to manage your team to a victory. There are none of the pitcher-batter duels that are really the heart of the MLB The Show series and there are absolutely no plays in the field where you’ll be required to move someone in position to make an out. Initially, this felt like a huge limitation to the game that would take some pretty fundamental aspects of baseball out of my hands, but the more I played, the more I began to realize that these really weren’t all that integral to the kind of simulation that OOTP is trying to be — one that relies more on stats and player attributes than any skill input from the user.

As such, the impact you can have on games as a manager becomes just as minimal, but in key moments of the game it becomes just as vital as if you were really in the dugout calling the shots. But to be fair, most of the game is spent clicking on the generic “Swing Away” or “Pitch” options that allow your players to do what they do best, and then watching as the action plays out with some rather primitive animations and graphics along with some play-by-play text. It’s not like I was expecting the visuals to be on the same level of The Show or anything — and they are certainly not without their own charms and utility — but what you get is a pretty crude rendering of every play that isn’t all that far beyond what I recall seeing from a baseball simulation on my Commodore 64 as a kid.

But in those crucial moments when the game is on the line, you can still make your impact felt as a manager, and potentially determine whether your team wins or loses. Strategic decisions like when to pull your starter from the game, when to sacrifice bunt, or when to bring in a pinch hitter or runner can really swing a game one way or another. And not only can you call for a steal to control activity on the basepaths (although baserunners will still sometimes be stubborn about following your orders), you can also play third-base coach and give runners the wave home or hold sign on potential close plays at the plate.

It’s all enough to make you feel like you’re involved in the game, even if it does leave a little something to be desired if you’re used to getting your hands a little dirtier and controlling your own players in games of MLB The Show. 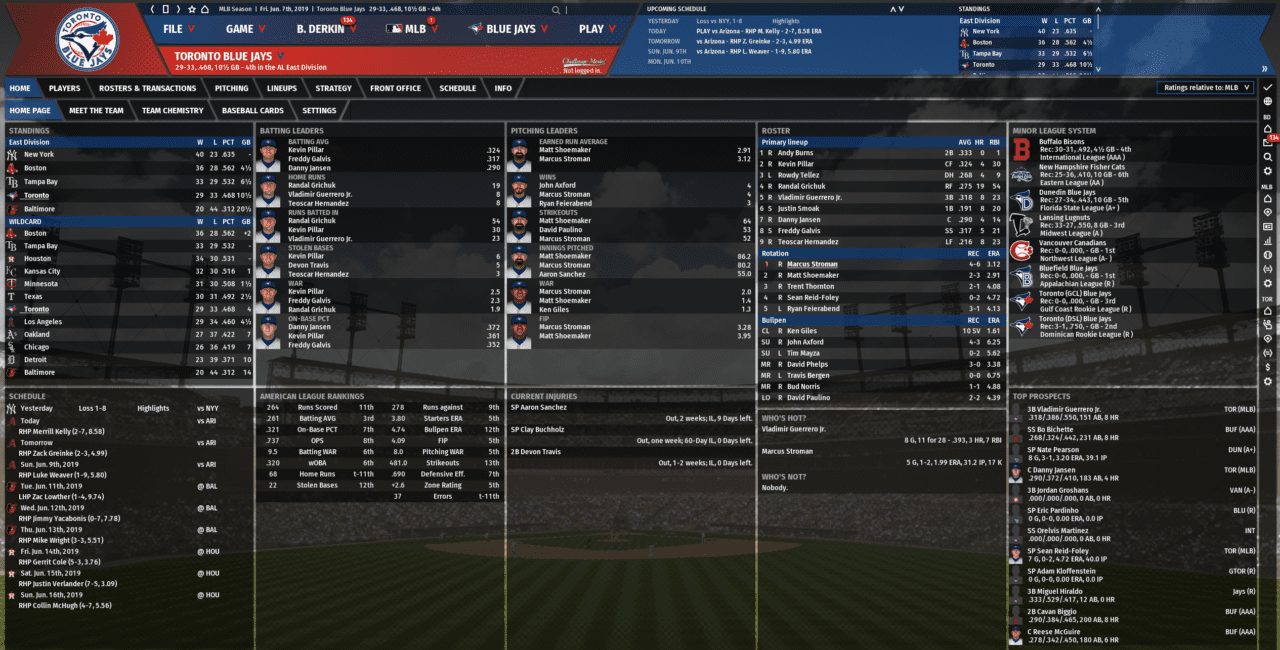 This is where OOTP shines and, at the risk of hyperbole, frankly makes MLB The Show pretty much look like it barely knows what it’s doing in some respects. From the ability to use historical rosters and customize your franchise any which way you choose to the overwhelming number of screens that you can navigate to manage your team and view all sorts of statistics, this is the comprehensive franchise mode MLB The Show players have wanted at their disposal for years. In fact, there are so many options when it comes to managing your teams that it wasn’t too long before it felt like a classic “be careful what you wish for” scenario, as I found myself using the ability to have the AI manage everything about my team more and more. I do like being able to do things like plan your lineups seven days in advance when controlling the minutiae of your team, but I have to accept the reality that I may never be someone who enjoys delving into all of the finer aspects of contract management. 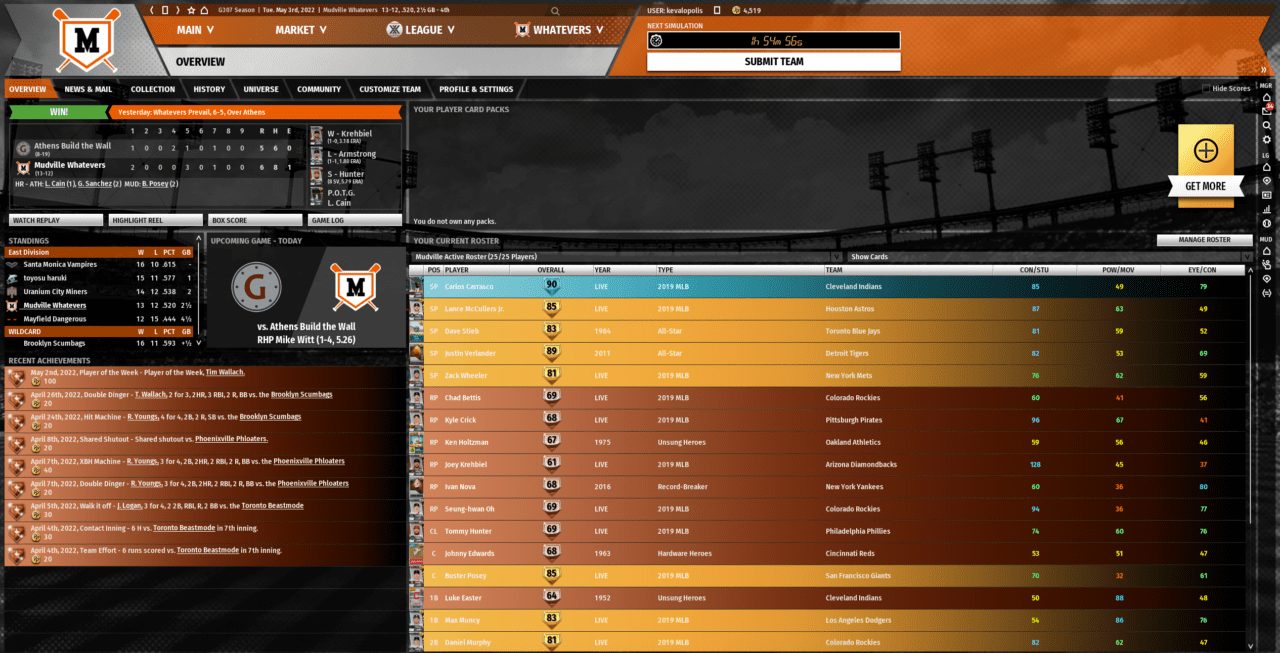 I’ll admit that a large portion of my time so far with OOTP has been spent playing their Perfect Team mode and trying to build a squad that can contend with others online. The concept is relatively simple and, at first, it all seemed like a bit of a waste of time to me. So I purchase players on the market using Perfect Points, carefully build my lineup and then all I get to do is review the results of a simulation? Where was the fun in that? But then a strange thing happened. I’d find myself checking the results of these simulations regularly each day, analyzing the recaps and box scores, wondering how my team had faltered over a five-game losing streak or anxious to find out which players had been on a tear when the team got hot all of a sudden.

I’m still not invested enough to begin spending any real money on the mode, but I do carefully watch my Perfect Points accumulate through various achievements, waiting until I have enough to upgrade a position of need. My bullpen is still a bit of a weakness and I should probably replace Tim Wallach at third base, but as an Expos fan who once met Wallach at spring training as a kid it’s going to be a difficult move to make. I have managed to make the playoffs a couple of times (never getting further than the Wild Card game though) and ascended to some tougher leagues, but my team right now certainly remains far from perfect.

If you’re willing to accept, or even embrace, the fact that games in OOTP aren’t going to be quite as immersive or offer you nearly as much control over your players as MLB The Show, there’s plenty to like about the game. For those of you out there like me who have grown so accustomed to carrying out every little action on the diamond, it will likely take some time to adjust and accept the fact that this is a different style of baseball simulation. But if you’re willing to be patient and give yourself over to becoming more of a manager than a player, you’ll likely find that the game is fun and challenging in a way that values baseball strategy and team-building philosophies over things like hand-eye coordination and stick skills on a controller.

This is the kind of game that shows the type of reverence for stats and advanced analytics that would excite those who appreciate Billy Beane’s Moneyball tactics in building a roster, or those who have their own theories about what teams need to win baseball games that they would like to put to the test. It may not satisfy anyone who needs to have their input felt on every swing or state-of-the-art graphics to show the action, but OOTP represents a worthy alternative for anyone who has ever dreamed of governing over both the front office of a baseball team and the strategy on the field, all while getting out of the way and letting the players perform just as they would in real life.

OOTP’s This Week In Perfect Team: Introducing the Card Most Requested by the Community!
Velocity, Control, Stuff: An Overview of Pitching Attributes in MLB The Show