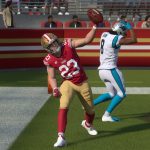 The Madden NFL 23 developers have shared their top three priorities for the ongoing Franchise Mode issues. The updates will arrive via upcoming server side updates and title updates.

After releasing their latest title update last week, many users from the OS community were wondering if the team would even mention anything at all. It’s good to see them finally crawling out of their shell with some transparency on the issues and the complaints aren’t falling on deaf ears. Let’s hope they continue.

As mentioned earlier this week, Madden NFL 23 Play Now Live updates won’t arrive until week 10. Instead of a weekly update to play the game online with friends or starting a Franchise Mode with the most up to date rosters, fans will need to wait until the Week 10 roster update to get the most recent rosters.

As always, we’ll keep everyone informed as more news arrives.