Emmitt Smith, Barry Sanders, Eric Dickerson and Jim Brown — but not Walter Payton as of yet — are here to ruin your day and make this meta even more run-heavy. I say that somewhat in jest, but this release does come with some obvious positives and negatives. Let’s get into it. 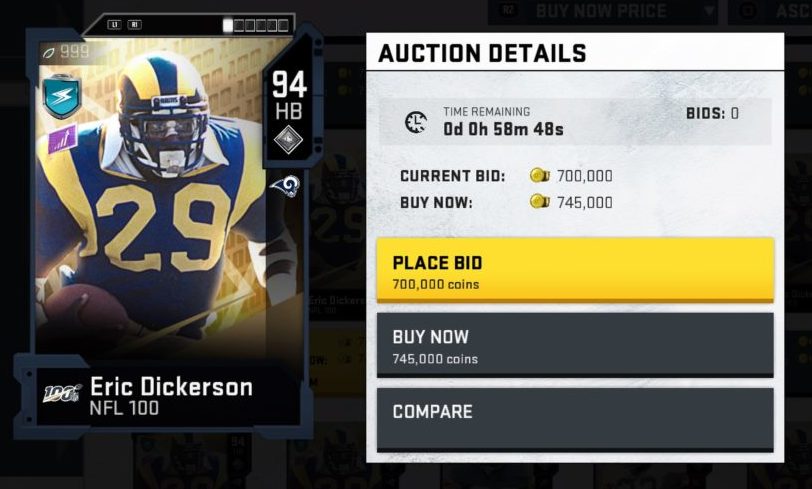 So just looking at him at a base level, Dickerson has 93 speed, 92 acceleration, 92 agility, 91 trucking, 90 juke and 91 break tackle. He won’t be a great pass catcher, but you can scheme Dickerson up and add some speed and some of the best abilities in the game. At first glance, Dickerson looks like the most versatile of the four running backs here even with the subpar pass catching.

For theme teams, you have the Rams, Colts, Raiders and I believe he should work on the Falcons as well since he had a short stint with them in ’93.

Also bonus points to the Madden team getting the goggles on him. This is my favorite of the four running backs released. He is going to be a problem. 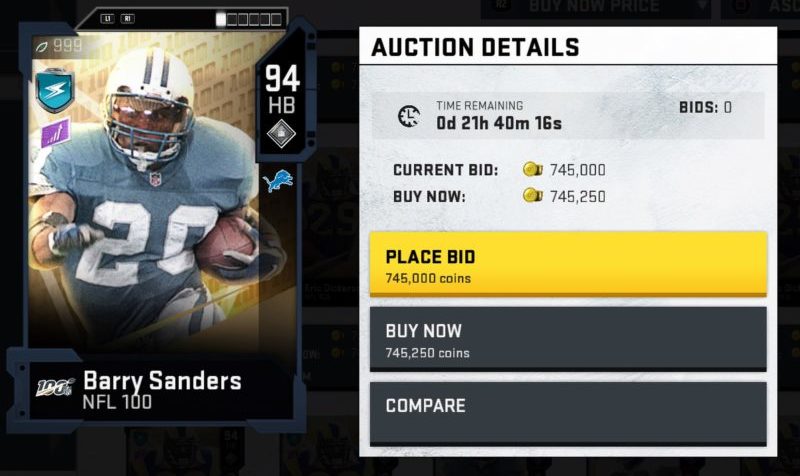 Sanders gets 93 speed, 95 acceleration, 95 agility, 92 spin move, 92 juke move, 92 break tackle. The one potential downside is his carrying is 86, and he’s also not a great receiver, but I would imagine Sanders is the easiest to control of this group. Having the ability to do Juke Box and Spin Cycle and also juice up his speed means Sanders will be a nightmare to contain. I assume he will be the most popular of the four running backs here. 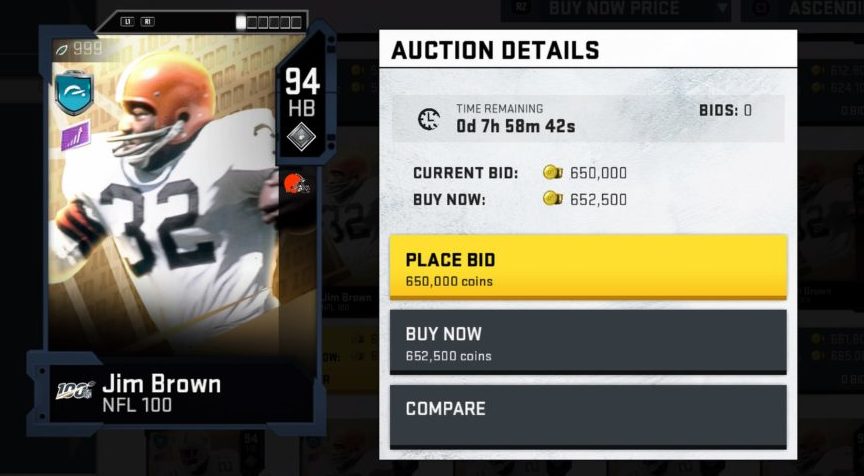 With Jim Brown, you get 92 speed, 91 acceleration, 89 agility, 90 strength, 90 trucking, 92 carry, 92 stiff arm, 89 juke and 93 break tackle. Power is of course the name of the game here, and he’s still going to be plenty fast as well. Jim Brown isn’t a great receiver either, but he’s good enough to use every down or just use when you need short yardage. I will be trucked by this card many times. 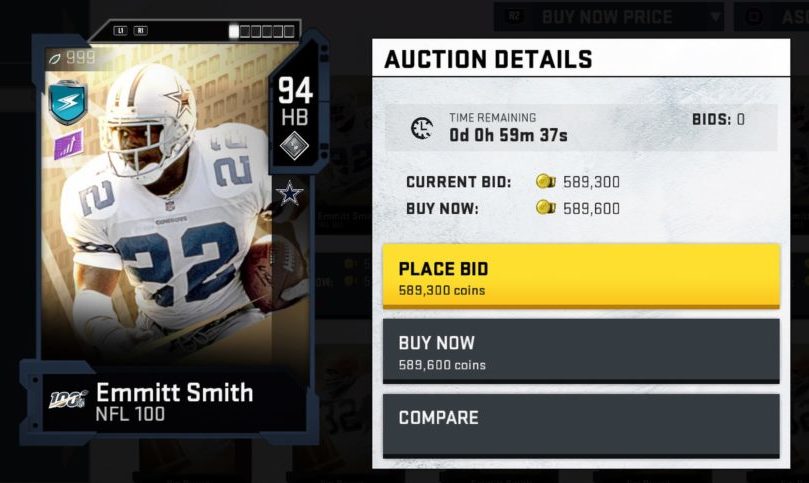 Emmitt Smith wraps up the group of four here, and he’s probably being overlooked the most, which I get. He has 91 speed, 91 acceleration, 93 agility, 93 carry, 90 juke, 88 spin move, 89 break tackle. The thing with Smith is he doesn’t pop quite as much with his ratings, but he’s the safest of the four. He’s got great carrying, he’s the best receiver, and it’s not like he’s not a beast still, he just doesn’t stick out right away.

He of course has a Cowboys theme, but don’t forget he will also works on Cardinals theme teams as well. Those theme teams are both looking better and better lately.

In terms of Solos, you’re going to be able to get Power Ups from them for each of these running backs. The other element to mention are the guaranteed packs you can buy, which are not terrible value — you’re guaranteed a couple of these running backs in them. However these cards are not Limited, so they’re going to get cheaper to simply purchase in the auction house. This is part of the negative aspect of this promo. Are these cards cool and awesome? Yes. Will they get a bunch of people excited? Yes.

However, is this meta already overwhelmingly weighted towards running the ball? Yes. And is there really anywhere else for the running back position to go in the coming months? These guys when chem’d up and have their abilities are already going to be nightmares. We’re already going to be pushing 99 speed, and these guys are already faster than pretty much anything you can put out there on defense. We’re going to go up from here? I hope not, but I can’t say for sure there won’t be better running backs in 6 weeks or so.

And while I won’t ever complain about cards not being Limited, it does mean these running backs will be on so many teams within the next 4-6 weeks. It’s going to make more teams feel the same, and I believe it’s going to stagnate the meta even more. Plus, we’re still getting Walter Payton at some point. Again, new cards are great, but there are diminishing returns and this initial excitement might lead to pain earlier in this game’s cycle as well.

I don’t know how much enjoyment you can gain from Madden 20 when you’re running into stretch plays mixed in with some dive plays online over and over again. There’s only so many defenses you can go to in order to stop them, and it means gearing your whole defense towards the run as well to simply keep it in check.

It’s not incorrect to release these players, but the timing is probably not ideal as it relates to game balance, and it will exacerbate some of the ongoing issues. But, again, I want to play with these cards, but I also hate the meta. They’re undeniably iconic players who will be fun to use, and yet they will frustrate me to no end.

Which of these four do you guys want to use the most?