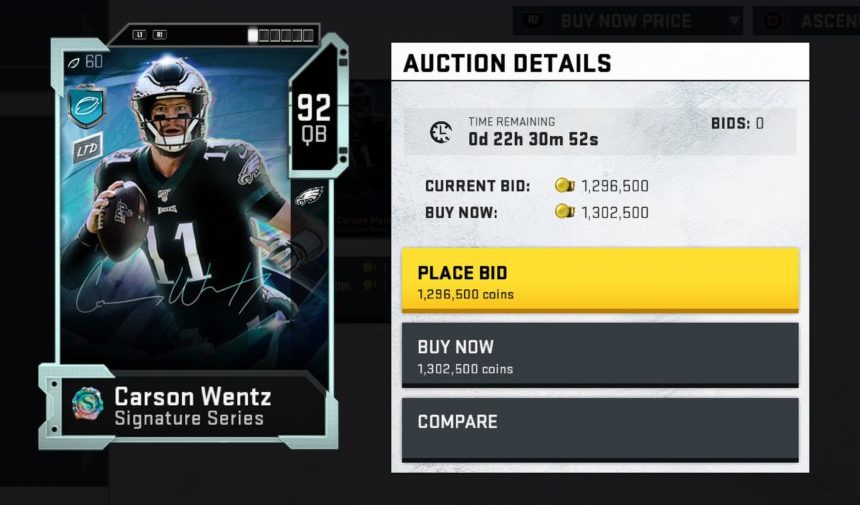 I’ll be getting on my soap box to talk about the House Rules update in short order, but first I need to point out a new potential top-tier QB coming into the game in the form of Signature Series Carson Wentz:

Find out the other tomorrow on GMM! #Madden20 pic.twitter.com/IdfSJBNPSP

It’s hard to say Wentz won’t be one of the best QBs in the game, especially if he gets a Power Up later in the year. He has 80 speed, 93 throw under pressure, 90 throw on the run, and he’s a quality QB across the board when it comes to power and accuracy. Now his 80 speed means he does not get Escape Artist, which means some people will inevitably not want him, but I think that would be a mistake to disqualify him purely on that basis.

I would also argue people are overrating Escape Artist because it does have some counters, but it’s also an indictment of Madden this year that abilities are really all people are looking at for many cards. NBA 2K is running into this problem as well with badges, and it really does seem like we’re getting to a point where sports games are going to yet again have to look at ratings and then how they’re interacting with these new badges/abilities systems. I commend a lot of the sports games for trying to bring down ratings across the board, but they’re creating a new issue with these abilities by not finding a great way to balance them against ratings.

I don’t think this is all on the developers either. Fans in NBA 2K and Madden are getting a little too obsessed with certain badges and ignoring certain cards to their detriment. It helps out people like me who see a “market inefficiency” of sorts and can gather good players on the cheap, but it also makes a lot of teams feel the same because they’re only targeting certain styles of players. In NBA 2K, this is a little more understandable in the MyPlayer portions of the game where there are defined metas for individual player types, but otherwise I think fans need to spread their wings a bit more in the team-related elements of these games.

Anyway, getting back to Wentz, his card is going for over one million coins, and I think that’s fair. This is a great card and matches up well with a lot of the other big names out there at QB. 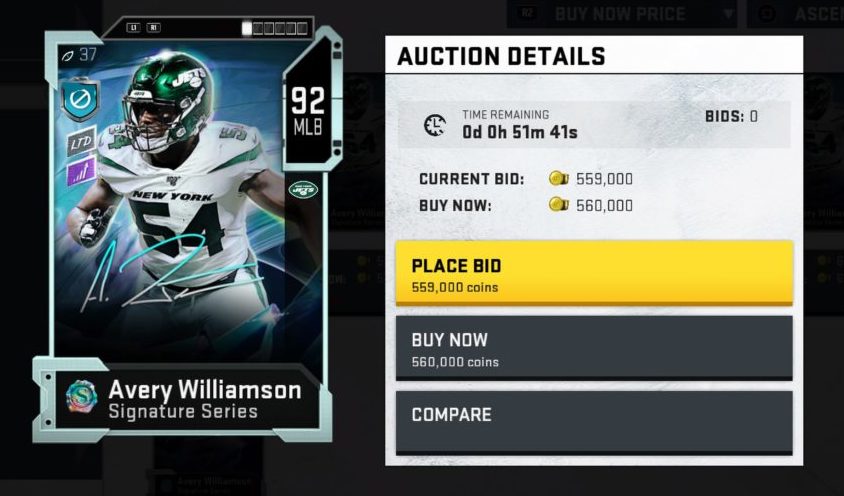 The other Signature Series card is Avery Williamson. Williamson is of course out for the year with a torn ACL so this is probably the only card he will get. It’s a good card, but it’s not going to get into the upper echelon of middle linebackers. This position is a user favorite on defense, and his 83 speed and soft coverage skills are going to hurt his chances of being used there. He does look like he will be a good run stopper, and he will have a team theme for the Titans and Jets, but this feels like a matchup-specific or team-specific card. 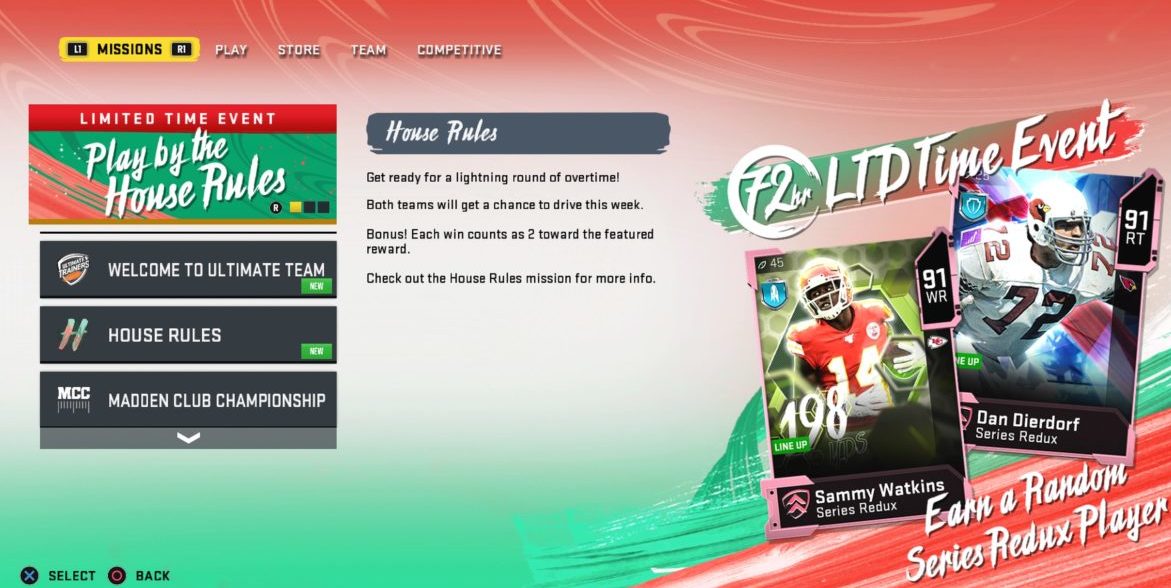 As for the House Rules, as promised they were updated during this event to now give each team a chance to score in OT. However, I need to hammer down on this event for a couple reasons. For one, each win now being worth double is something you need to say ahead of time. Some people have been grinding this event like a part-time job because even if you’re great, 130 wins is an insane number to get to in this small amount of time. Knowing the second part of the event was going to be worth double the wins would have been nice to know from the start. Now, does that mean some people would have not really played the first part of the event? Probably, but House Rules are supposed to be a fun change of pace, which brings me to my next point.

130 wins is just too much. It’s overkill. The Series Redux card isn’t even a guaranteed 92 or above. You may just get a 100K card that’s not really anything exciting. If you’re going to demand 300 wins, and like 15+ hours of commitment within a compressed time frame, it’s not okay to not have a better guaranteed reward. There are much easier ways to get 100K coins in this game, and the “chance” at something more than that is not fair when you’re putting in this much time.

The counter to that is just to say “well then don’t play it” or “it’s just supposed to be a fun change of pace” but neither of those arguments really hold up here. You are dangling a carrot, and the developers have to know the whole point of playing House Rules is to be a fun change of pace while eventually snatching that carrot. But it’s not fun when you have to grind for 130 wins to get the only reward that really matters. Way back when, it used to just be 10 wins in House Rules. That was fun, and it was way more relaxing when you knew you would get the reward while doing a fun change of pace thing. But nobody really wants to play the fun side mode when you don’t have a real chance to get the good reward.

Regardless, if you’re demanding 130 wins, the reward has to be better than this. The guarantee needs to be for at least a 92 overall Signature Series. At that point, I can at least justify saying why it makes sense to need 130 wins to get the reward. But right now, this is just a bad use of House Rules.