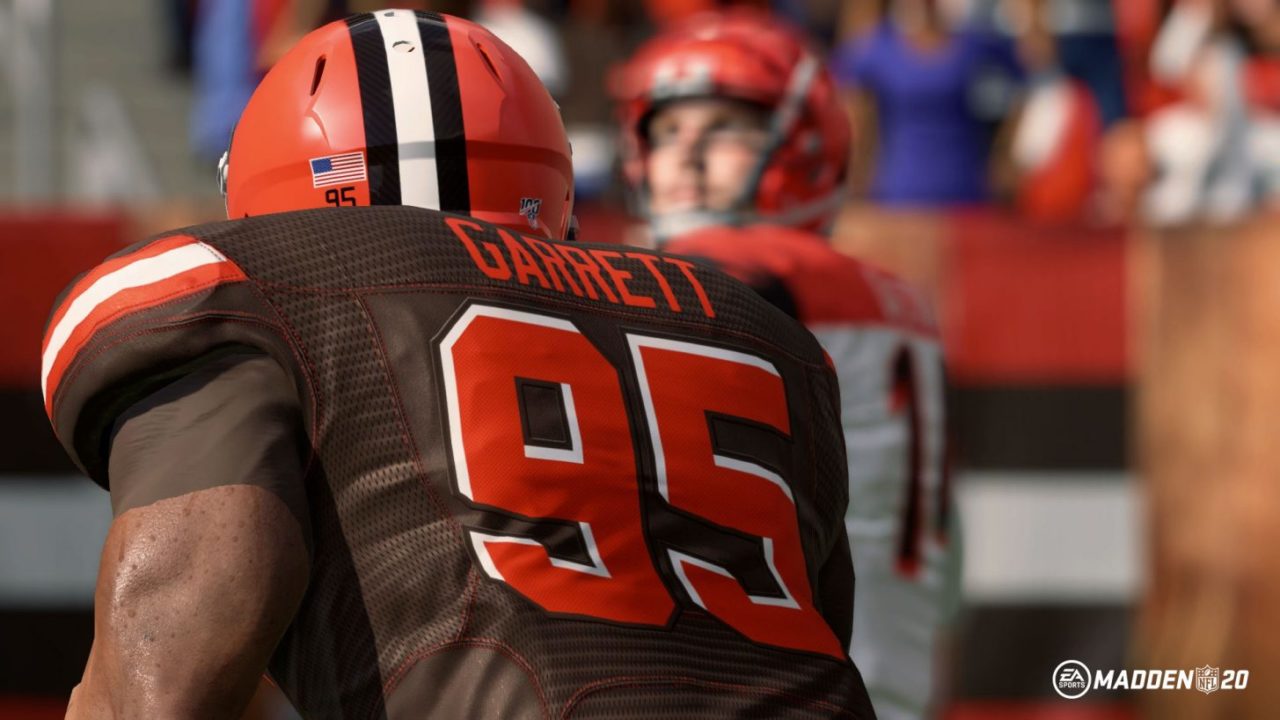 Let’s start from the beginning, which in this case is the kickoff from the receiving team’s point of view. Right away, I love how the returner catches the football. It’s much more realistic looking than in the past. I immediately noticed that the player movement is better than ’19. What was dubbed RPM last year in Madden 19 seems to be gone since they didn’t decide to call it RPM 2.0 or anything similar. This is a very good thing to me. Last year, they attempted to make the feel of player movement more realistic, but I found it to be clunky and more cumbersome than Madden 18.

To put it another way, this year feels like a good mix of Madden 18 and Madden 19. Players seem to be more grounded and their movements seem more physics-based than before — dare I say more like Madden player movement in the PS2/Xbox era. It’s not quite there yet, but we are getting close. It also seems like everyone on the field moves faster. This is good. Football is a fast game, and I feel like EA is starting to nail that. Ball carrier special moves are easier to pull off and are more realistic looking. Feathering the stick will slightly steer you in the direction you want to go without a janky movement. This means that it’s easier to slip through and by defenders. This is especially appreciated in the running game.

And speaking of the running game, it just feels good. It’s not perfect. Linemen still miss blocks they should make, but it seems more ratings-based. But the best part is that running backs can move into holes and still push forward for an extra yard or two. They even sometimes fall forward. One of the worst things about being a ball carrier in previous versions of Madden was the dreaded stand-up tackle that just knocks you back a few yards. It still exists, but that animation plays out much less in this year’s version of the game. You are more likely to be tackled to the side the defensive players hit you on than to be driven straight back. This is a welcome change that was sorely needed. It’s also a little easier to break a big run this year. Blocking has definitely improved, and if you follow the play design and your blockers, you have a much better chance and gaining some big yards. Overall, running is just better this year.

However, the area where Madden 20 may have improved the most is the passing game. This is in large part due to the new ball trajectories. Medium passes seem to now realistically float out of the reach of “super” linebackers. Now this isn’t to say linebackers can’t deflect passes, because they absolutely can, you just have to be careful not to sling a bullet pass right at them. Passing accuracy seems to be a little too uniform across the board with high-rated quarterbacks down to lower-rated QBs. It’s not like it’s jarring, but it may need a tweak with a patch. But as far as floating those medium lob passes over the defense, that feels good and that’s something that’s been missing for a long time.

But with the good comes the bad. It feels too easy to hit on outs and corner routes. I should also mention this is without slider adjustments as I am always of the belief the game should play the most realistically on default All-Pro difficulty — that’s just my opinion. The CPU also needs some tuning as it relates to zone defense because it’s probably still a little too easy to pick on the AI when they drop back into a zone. Deep routes and streaks seem to be more realistic. However, there are times with one-on-one man coverage plays where even an average receiver can beat a good corner deep. Again, this isn’t every play, and it happens in real life so it’s not like it should not exist, but it’s something to keep an eye on. Even with the negatives in the passing game, the improvements are welcomed and sorely needed. Overall, it’s much better.

Another important aspect of the passing game this year are RPOs. Run/pass options are becoming very popular in the NFL, and EA deserves credit for getting them into the game this year. There is a learning curve, however. You only have about a second or two to decide on whether you want to throw or run. And if you wait too long to throw, there is a good chance you will end up getting an illegal man downfield penalty, which is also a nice and realistic addition to the game.

Defense this year is more fun to play due to the addition of Superstar X-Factors. I feel like the most effective X-Factors are the edge rushers. Being able to collapse the pocket and force the quarterback to move in some way really helps with realism because then the quarterback doesn’t have all day to throw and wait for an open receiver to be 20 yards away from a defender. Even if you aren’t getting sacks, you are still affecting the outcome of the game. By collapsing the pocket or chasing down the quarterback, you force him to make a bad throw or bad decision in general. The problems with the CPU and zone defense still apply when the user is playing defense. I found man-to-man defense to be a little better. Either way, I will say it’s a tough job finding balance with pass coverage. I’m not giving EA a pass at all because this needs to be tightened up, but it always seems like if they do tweak pass coverages then it will swing the other way and be too tight. In short, let’s hope they can strike a balance.

And finally, special teams. I honestly don’t think they changed much with this facet of the game (besides the aforementioned catching animations). Kick and punt return blocking are still very hit or miss (it’s usually miss). However, they may have tuned the ability to block kicks and punts this year as I have blocked multiple kicks already. This is cool, but I don’t want to see too much of it. I don’t want to see a kick get blocked every game. I would think every 2-4 games would be the most realistic.

So tell us how you feel about the gameplay so far. And stay tuned as we continue to roll out our Madden 20 coverage in the coming days and weeks.