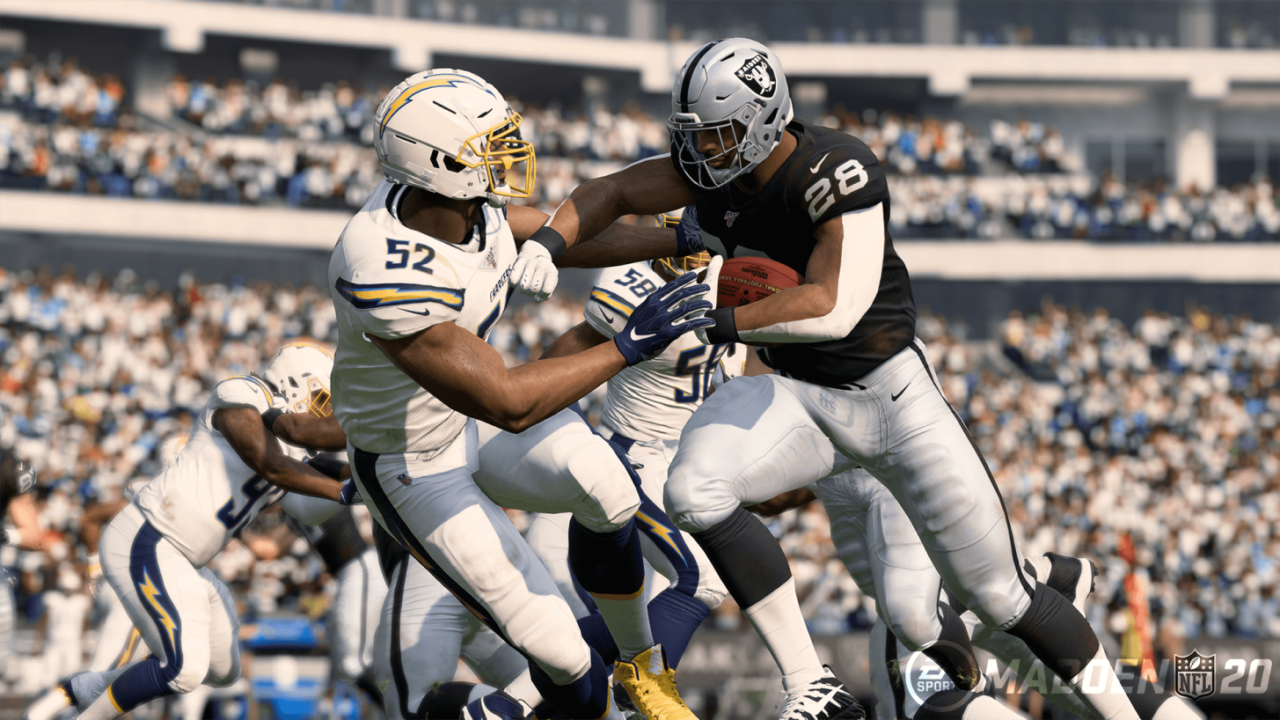 Firing up Madden 20 for the first time brings some excitement. The new screen wipes are cool, and the menus are clean and simple to navigate. Whether you choose to play the Pro Bowl or not (I did), the excitement is palpable. Jonathan Coachman is back to greet you before games, and some nice presentation shows players running on the the field.

When you play the Pro Bowl, there are X-Factors galore. It gives you a good sense of how they work, but also can be a bit overwhelming at first. When you get into normal games within play now or franchise, you will have less to deal with and can concentrate on learning the ones you have to deal with on your own team. Personally, I like them so far. They make superstars feel like superstars.

On the field, a lot of the user feedback from the beta remains the same. Everything is also generally presented in a more realistic fashion. From the way the players line up facing forward on kickoffs to the way the kick returner catches the ball, there’s more focus here on the small things. I’ve also continued to see an improvement with player movement. The game moves faster and the players are more responsive. Ball-carrier moves are effective but not overpowered. In the running game, holes open and close. The better backs can hit them faster, the stronger backs can carry weight and move forward for some extra yards.

Passing is more fun this year as well. New pass trajectories are noticeable right away and super linebackers are gone. I feel more in control with my throws, and there is an obvious difference between star quarterbacks and average quarterbacks. However, there are some noticeable negatives in the passing game. It seems like zone defense needs some work on both sides of the human/CPU component. It seems defensive backs make some wrong moves and bad decisions. This is not on every play, but it does need to be looked at and hopefully is fixed in the day-one patch.

But overall, I think defense has been enjoyable to this point. Using edge rushers and linebackers with X-Factors is about as fun as it gets on defense to this point. When I play with the Browns and use Myles Garrett, he is a beast. He plays like an elite edge rusher. Pick another edge rusher with an 80-85 rating, and you should easily see the difference. But again, I have to go back to pass coverage. I found myself getting burned a little bit too often. CPU receivers seem to beat zone coverage pretty easily (as I mentioned previously). Even on short passes, they are getting big gains. Sliders may fix this issue, but again, a day-one patch would be ideal.

If you are skeptical of the CPU running game, don’t be. Every game I have played so far the CPU running backs have been able to put up respectable, if not huge numbers. This brings me to blocking. As for run blocking on both sides, I would say it’s done well. It seems to strike a balance between plays that are well blocked and plays that aren’t, just like in real life. User pass blocking is good for the most part, but you need to be quick. Gone are the days of 10 seconds in the pocket — you may get five if you are lucky. It also helps to step up in the pocket, or sometimes you just need to get out of there. In other words, quarterbacks who can move will have an advantage this year.

We will be digging into franchise mode in its own article once we’ve had more time with it, but in a quick overview, it looks like not a lot has changed on the aesthetics front. Everything looks similar but some stuff functions differently than last year. The Scenario Engine is on the clock, so to speak. It will take a little time to figure out how much this will improve the user experience. EA has promised that franchise mode will continue to get the love and attention it deserves in the future.

QB1 looks to be a very fun and entertaining mode. I played through the draft and It’s impressive so far. Other than just creating your appearance, you also have many choices to make that will shape your personality. This will apparently directly affect your draft stock, or how other players and coaches will see you. Once you are drafted, you then begin your legacy (as you are told). Hopefully this mode keeps me engaged in the coming weeks.

On the MUT side of things, it has received some love from the new gameplay changes — or better described as player archetypes and superstar abilities. The general team building will probably focus on those elements as you have your normal PvP, MUT Champions and Solo Battles. This year there is also a new structure for missions, which we also focus on in a future article. In short, I think the gamers who enjoy this mode will be happy this year.

There have been some reports of late-game CPU AI issues where the CPU isn’t in a hurry to do things when they absolutely should be. I haven’t noticed much of this myself. In the last game I played before I went to bed last night, the CPU was down 24-21 late in the fourth quarter and they ran hurry-up offense, called timeouts and even went for it on fourth and goal with a few seconds left. I’m not doubting this is an issue, but it may not be seen by all. Either way, if it is an issue for one person then it should be fixed.

Overall, as just a brief first-impression overview, I feel like Madden 20 has taken a step forward in a lot of areas. And, of course, there are still some areas to be worked like with every sports game. Some of the issues mentioned here, and some that have been brought up other places, will hopefully be taken care of sooner rather than later in an upcoming patch.