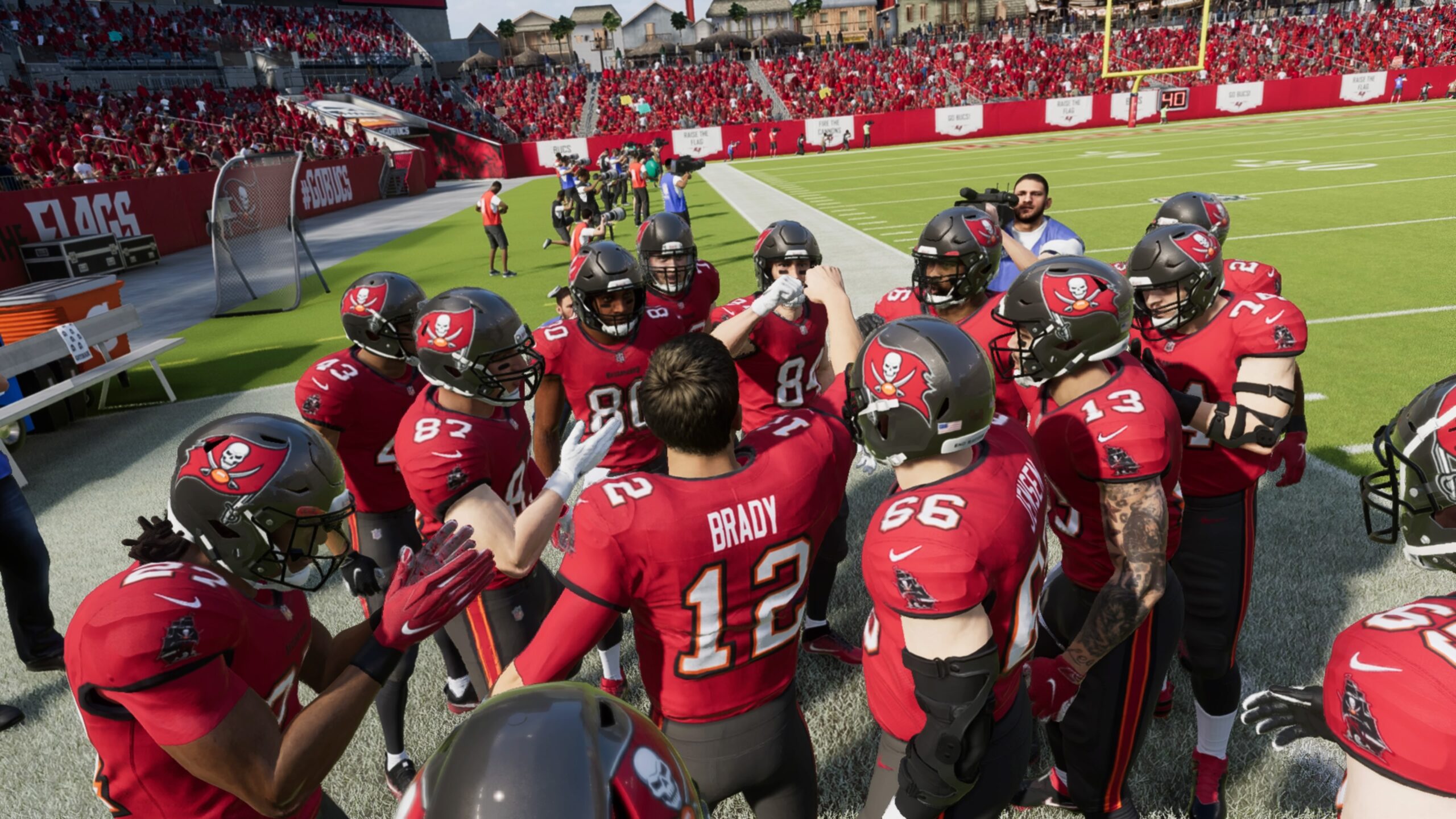 The release of a new Madden game every year is accompanied by certain things that we’ve come to expect from the game’s community like clockwork: YouTube videos outlining money plays that you can use to confuse the AI defense, videos of hilarious and infuriating glitches occurring on the field that will require patches to fix, and an outcry from people proclaiming that this year’s Madden is the worst one ever. On the other hand, there are others who might be playing a Madden game for the very first time or are returning to the series after a long hiatus, and they will make posts about how amazing the game looks and feels from a fresh perspective.

As with many things, the truth typically resides somewhere between those two extreme opinions, and it’s necessary to wade through an excessive amount of hyperbole to discover even just a whisper of truth within what many of these voices insist on screaming at the top of their lungs. Madden 22 is capable of providing exciting and realistic football action right alongside some egregious gameplay issues. At times, both these extremes will even exist on the very same play. The game is far from perfect and could obviously still use some refinement to be a proper simulation of football. However, it’s also not the complete unplayable disaster (except for maybe some of the zone defenses) that many seem almost giddy about showing off upon release.

With a focus on Madden 22‘s presentation and gameplay, I’m going to attempt to cut through some of the empty proclamations and take a balanced approach to certain aspects of the game that have been improved and other areas that remain disappointing. By doing so, perhaps we can get a more honest survey of the game’s strengths and weaknesses without simply parroting the same tired and inarticulate complaints about the game being “broken” that you hear every single year.

Madden 22: The Good And The Bad 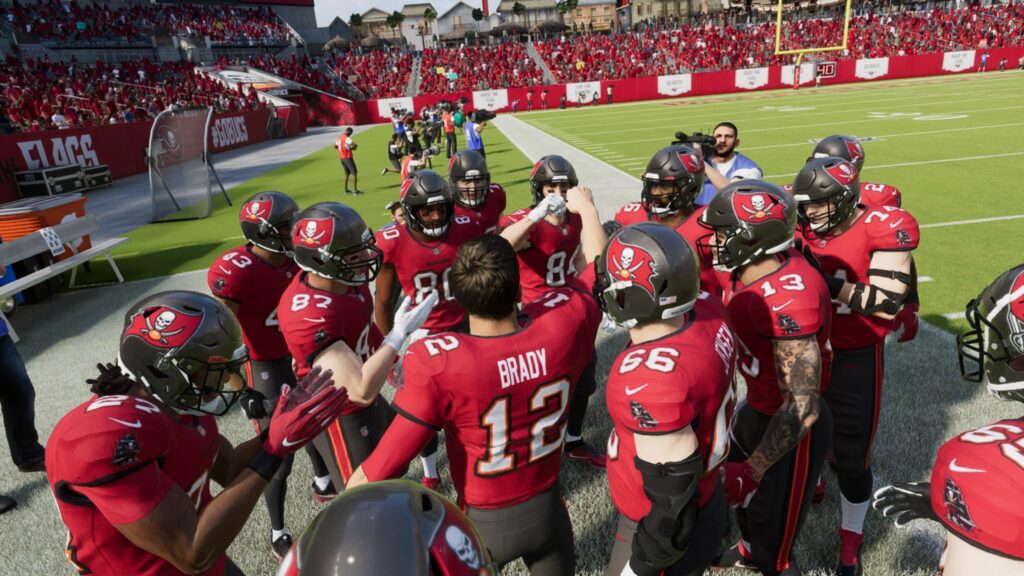 It’s not like the ground game wasn’t effective in Madden in recent years. It’s not hard to remember when it was so firmly entrenched as the meta of the game that competitive players at the highest level rarely ever even chose to pass the ball because it just wasn’t necessary when you could continue to get good gains without having to risk an interception. But just because it worked well in the past doesn’t mean that it was actually fun.

It’s definitely become more enjoyable this year when there’s more skill required in employing some patience and then making smart decisions about which hole to hit and when to judiciously use that speed burst to shoot through them. There are now more realistic one-on-one situations where you encounter a defender in space, and the entire success or failure of the play comes down to whether you can make a man miss with a well-timed ball-carrier move to create some yardage for yourself.

Even though the running game is in better shape than it has been in the past, there are still some decisions that the offensive line makes that are downright baffling. While it can be encouraging to see a guard on a running play initially engage with a defensive lineman before moving on to the second level to pick up a linebacker, it’s also incredibly disheartening to continually witness offensive linemen let a defender waltz right by them to allow a free run at the quarterback when they clearly could have and should have made at least an attempt to block that player.

It’s this kind of faulty logic that has plagued line play for years now in Madden and it makes it increasingly difficult to become immersed in the action in the trenches when guys routinely seem to be making inane decisions that have the potential to derail a play before it even gets started.

When having to contend with the kind of unstoppable money plays that opponents are researching on YouTube, it’s important to have a secondary that can keep up with receivers. However, playing in man-to-man coverage has always been a bit of a hit-and-miss proposition in past editions of Madden. Madden 22 thankfully continues the series’ slow and steady improvement in that department as defenders can now be counted on to more reliably stick closely to receivers, especially if those defenders in question happen to have superior man coverage skills.

There will obviously still be times when offensive players will come flying free when you’re attempting to play single coverage on defense, but there isn’t quite the same inevitability to guys getting wide open on the same plays over and over again now so it has become a more viable strategy to utilize with some regularity.

Another reason why a defense playing more man-to man coverage has suddenly emerged as a more popular game plan is that the alternative of having your defenders in zone coverage has clear limitations. In particular, defenders who have been given the assignment of playing deep halves of the field (think cover 2 or cover 6) have a tendency to struggle mightily by just letting receivers run right by them with little concern for tracking or pursuing them. The fact that it’s defenders in this specific zone who seem to be especially vulnerable is really one of the worst-case scenarios for Madden players because it means that opponents can choose to exploit this weakness with deep passes that can easily go for touchdowns when coverage on the back end fails.

It used to be that CPU QBs in Madden could almost be confused with statues in terms of how they would sit in the pocket and be completely unwilling to throw the ball more than 10-15 yards down the field. The good news is that those days are behind us now that they’re willing to actually throw the long ball from time to time. Whether you like it or not, the CPU quarterbacks will also scramble out of the pocket now and try to pick up some yards with their feet, especially mobile QBs like Lamar Jackson or Russell Wilson.

In general, the CPU is a bit more sophisticated than it has been in the past, particularly on offense and on All-Madden difficulty, and AI players are perfectly capable of putting together an impressive scoring drive at a moment’s notice.

If you want to use Madden 22‘s Super Sim functionality that’s been around for years now — perhaps because you’d rather play select moments from a game rather than the entire thing — you’re likely to be disappointed by its limitations. Even though it does a satisfactory job zipping you through any action that you don’t necessarily want to partake, the feature drops the ball when it comes to timing.

Do you see anything wrong with the clip above? As you might notice, the Bucs are driving down the field and are somehow running a play every 20 seconds or so, which is almost impossible (unless maybe they’re in hurry-up offense, which why?) and it flies in the face of the quarter length specifications you’ve set for the game. That means if you want to play a game on 15 minute quarters with an accelerated clock that runs the play clock down to 10 seconds before each play, the Super Sim system won’t recognize this if you decide you don’t want to play parts of the game and will still run plays every 20 seconds or so.

No matter what you do, the Super Sim version of the game will always be running at a faster pace than in sections of the game that you decide to play. This will inevitably mess up all of your stats.

Madden 21 was often hampered on the field by a reliance on awkward animations that could occur whenever two players happened to engage with each other, which in the sport of football is obviously pretty often. This could become especially apparent when two players went up for a ball at the same time, and you could really feel the under-the-hood dice rolls determining whether the offensive or defensive player would ultimately be the one coming down with it. It was also felt in nearly every tackle, where there would too frequently be canned animations that made little to no sense based on how a ball carrier and a defender collided.

In Madden 22, the interactions between players feels a little more organic and realistic. Larger players will typically cause smaller ones to give some ground, and the animations used to show players being pushed, pulled, and dragged down seem more appropriate given the context in which they happen.

In theory at least, it seems like a great idea to have Madden incorporate some sort of system that attempts to replicate the concept of a team’s home-field advantage in a game. However the execution in Madden 22 comes up somewhat short. Though there are different ways that the game attempts to make the idea of home-field advantage felt on the field, it sure seems like the most common ones you’ll see to make things more difficult for a team are a shaky screen and blurry play art before the snap. These might make things slightly more difficult for someone, but they really don’t do much to reflect the actual impact a crowd could have on a unit.

Since communication is always a factor when there’s a lot of noise, it might be better to see a receiver run a wrong pattern after you attempt to call a hot route at the line rather than obscuring the screen like a bad video game approximation of a character being drunk. The way that this new system also attempts to account for swings of momentum within a game can’t help but lead to a bigger question that NFL writer Bill Barnwell has explored in the past of whether momentum really even exists in a football game. 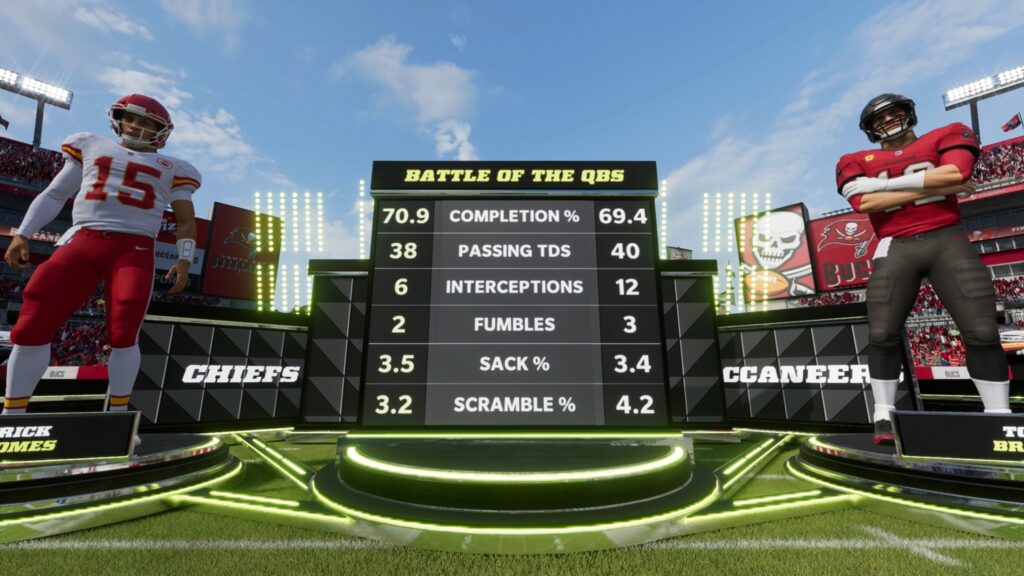 A big part of creating an exciting atmosphere for a football game is making sure the stage is adequately set before a single snap has even happened, and Madden 22 does an admirable job of this through some impressive pregame visuals that showcase the stadium, fans, and the players prior to kickoff. It may not look exactly like a television broadcast you would see on Sunday, but in some ways it’s even better because of how close the virtual cameras are able to get when capturing players getting loose in warmups and the age-old thrill of seeing planes flying over before the game starts.

Even the replays that are shown after the whistle possess some nice flair and will have you noticing small details of what happened on any given play. It doesn’t hurt either that player and coach likenesses have come a long way from the days when you had to really squint to be able to tell who the game was trying to digitally recreate.

For better or worse, referees and penalties are a part of football, but you wouldn’t know that from playing a game of Madden 22 where on default settings they rarely even make their presence known. It’s understandable if those choosing to play on competitive mode don’t want to have their games interrupted and influenced by penalties being called, but you would expect that it would at least become more of a factor when playing in simulation mode.

Even when you attempt to increase the number of penalties by using the game’s sliders, there still aren’t nearly as many flags being thrown for things like holding or false start as you would usually see in an average NFL game. That can’t help but make the game seem a little less realistic than you’d expect from something being billed as a simulation.