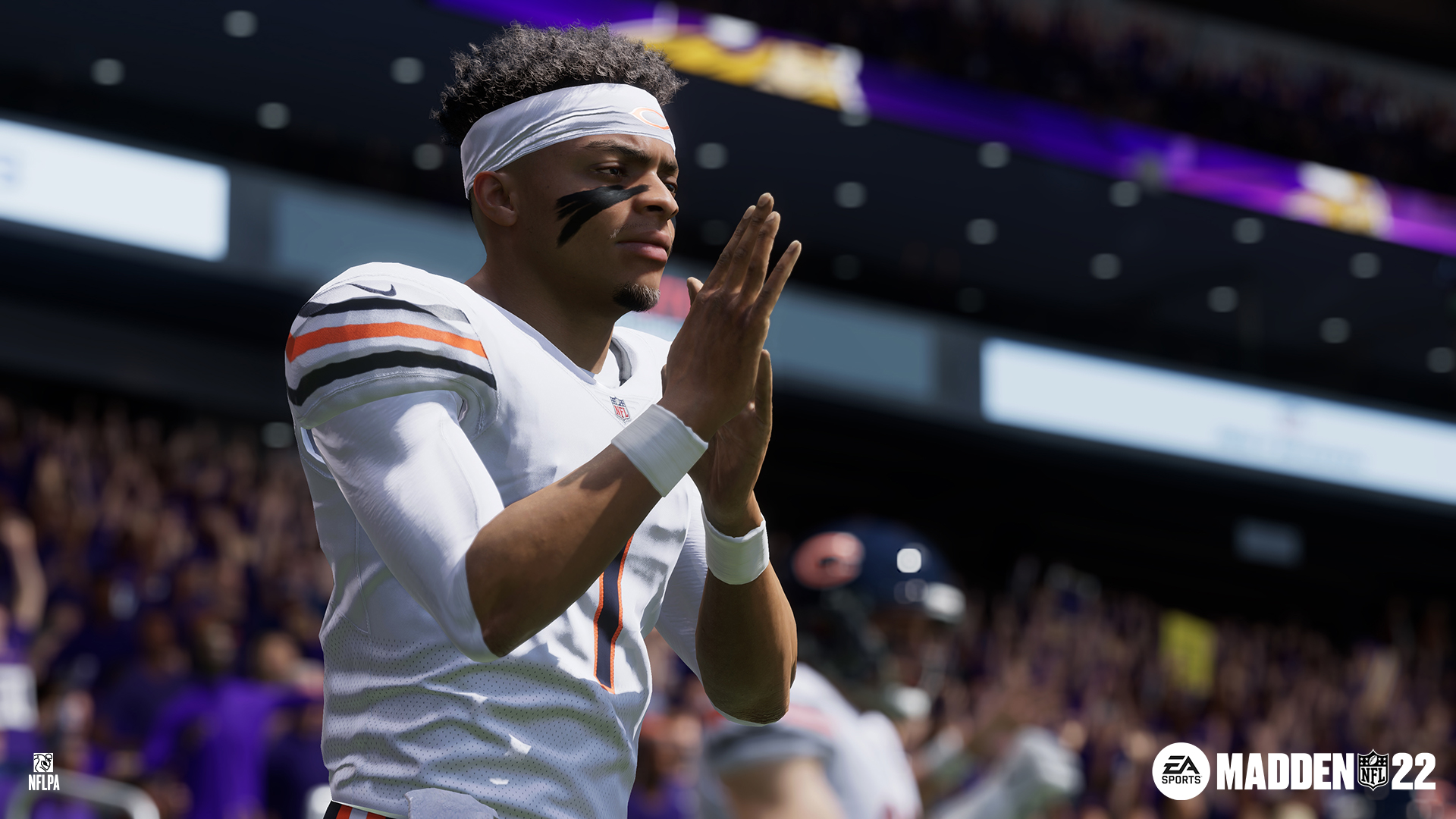 It’s that time of year again where the previews for the next set of sports games start to roll out, and the promises about what has been improved start to be conveyed and explained in full detail. As always, that cycle starts with our first look at Madden 22 in this hands-off preview.

EA Sports invited me to a Madden 22 media presentation, a presentation that included and highlighted many of the new improvements to a sports game that is widely considered one of the most polarizing games in the genre. Although I’m a seasoned veteran of this franchise myself, I always try to walk in as a clean slate, so I tried to keep my expectations focused on what EA had said in the lead up to this event.

Much like last year, the presentation included multiple EA developers explaining what has been improved and implemented, and it ended with a panel of Clint Oldenburg (gameplay producer) Seann Graddy (executive producer), and Connor Dougan (creative director).

All three had plenty to say, but unlike some years, there was some real excitement in the delivery because of the content they were discussing and delivering. So that’s who was involved, but now let’s talk about what was said, and some of the new features and improvements you can expect from Madden 22 come this August. 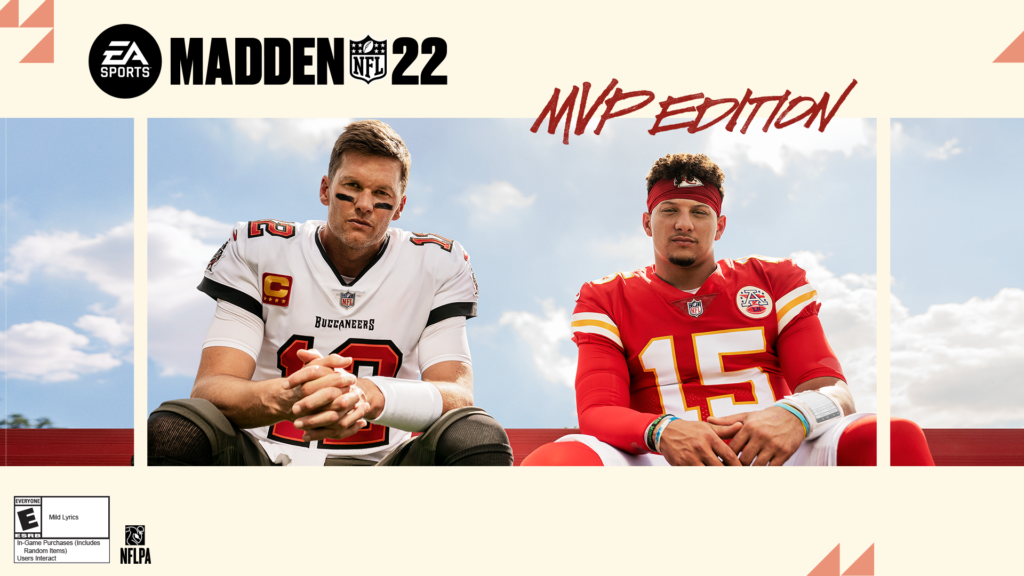 Every year there seems to be a new highlighted buzzword for Madden. This year is no different. That word or phrase was Dynamic Gameday. I was intrigued when they first mentioned it, and my excitement slowly built over the course of the presentation as they divulged more about what exactly Dynamic Gameday is and how it will impact Madden 22.

To start, Dynamic Gameday is referring to the overall atmosphere surrounding the day of the game for your favorite team that you are using, and it incorporates and impacts elements both on and off the field.

Madden players will now see a more dynamic crowd that includes a stadium that feels more alive and better represents what is seen on TV or in person when attending a game. It also incorporates what the panel described as “super fans,” and if you watch any NFL coverage at all, you have a pretty good understanding of what a super fan looks like. On any given weekend, fans will take notice of other fans that dress a bit more flamboyantly, scream a bit louder, and are no strangers to face paint because ”gotta support the team.”

Dynamic Gameday does not just stop there, as it also incorporates some much-needed new presentation and atmospheric excitement to make it feel like each game is the most important game of the year. The new buzzword also incorporates all-new crowd animations, momentum-driven sideline reactions, new celebrations, and all-new real-world crowd recordings to help deliver an in-stadium atmosphere that represents what we hear in real life at the correct moments. 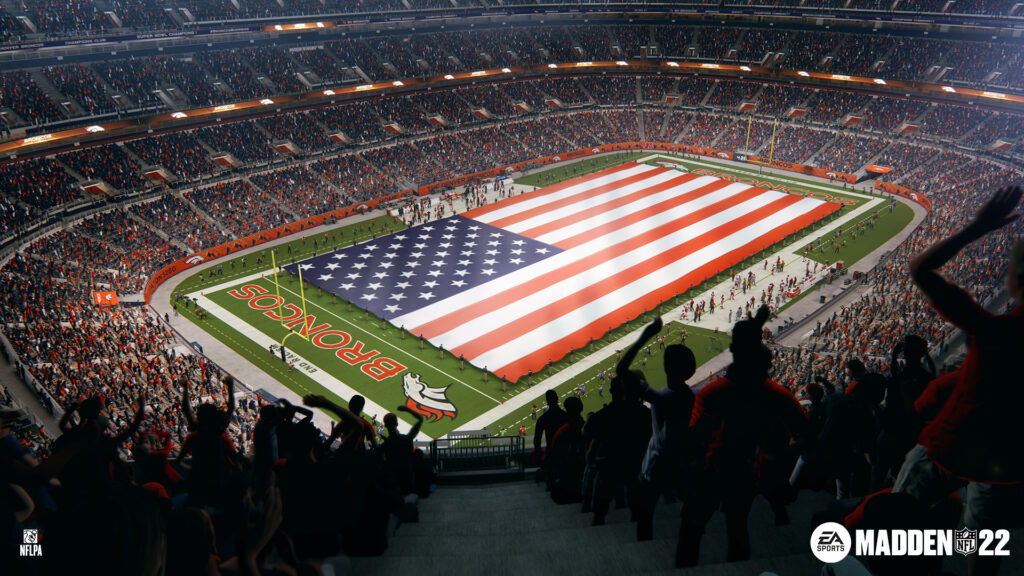 The development team also implemented new elements into each stadium that are team- and stadium-specific. The focus is on that specific stadium, its home fans, and team-specific routines commonly seen on the field.

While a lot of that sounds and reads like a commercial for the proverbial “back of the box” selling points, the multiple examples that were shown both in video and still shots got me excited. The examples given and shown really did make each game and stadium feel much more authentic than in years past, and I am extremely interested this week to get my hands on the title and see how it looks for each team.

Another buzzword that was used early and often was momentum. While there wasn’t a lot of gameplay footage shown, the presentation did include a deep dive of sorts into the new improvements in regards to AI.

The improved player movement and additional tweaks and upgrades to the next-gen driven, stat-based AI movement, which is a statistical system used to help AI players mimic their real-life counterparts on the field, were mentioned as the reasons Madden 22 should be closer to real NFL action than ever before.

What has changed or improved for Madden 22 on the field? As I said, I won’t have the game until the end of this week to really say for myself, but those are the high-level points being made as of now. 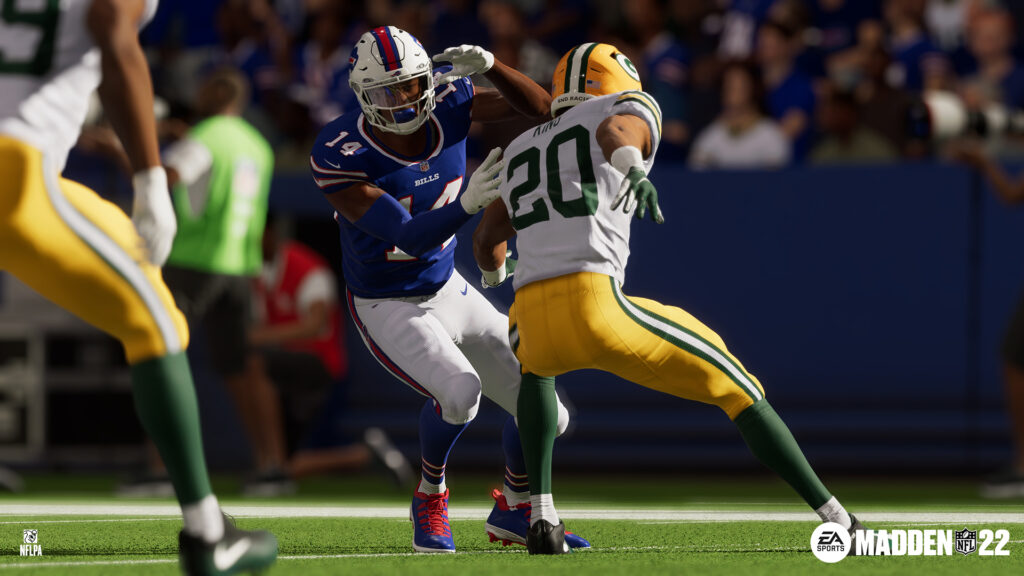 Madden 22 will attempt to feature player movements and interactions that resemble what we see on TV and less like a series of predetermined animations playing out. Some of the upgrades or improvements were specific to the catching department, where the developers promise more battles for the ball, better sideline catches, and improved reaction and responsiveness.

While the development team felt good about where the blocking game currently sits on next-gen hardware, they did mention that work has gone into the system to refine, adjust, and create more authentic sequences than in the past.

While this refers a bit to the player movement 2.0, Clint Oldenburg went into the minutia of some of the improvements to both superstar abilities, and home-field advantage upgrades that are team- and stadium- specific. I think many will see some strong resemblances to the old system used in NCAA Football 14.

To me, it is interesting how many of the features in Madden 22 may be playing off of each other and bleed into one another this year. I believe NFL superstars and home-field advantage are two of those things doing just that.

In Madden 22, the development team is working hard to make the superstars in the league stand out more, but they also implemented a system that takes their abilities to the next level when the stadium is rocking. Home-field advantage kicks in when the team, in general, performs certain tasks very well on a consistent basis. At certain points, the whole team will benefit, especially the superstars of each team.

Clint also broke down how each team’s home stadium will have unique advantages to them that can help fuel the home team and put the visitors at a disadvantage. 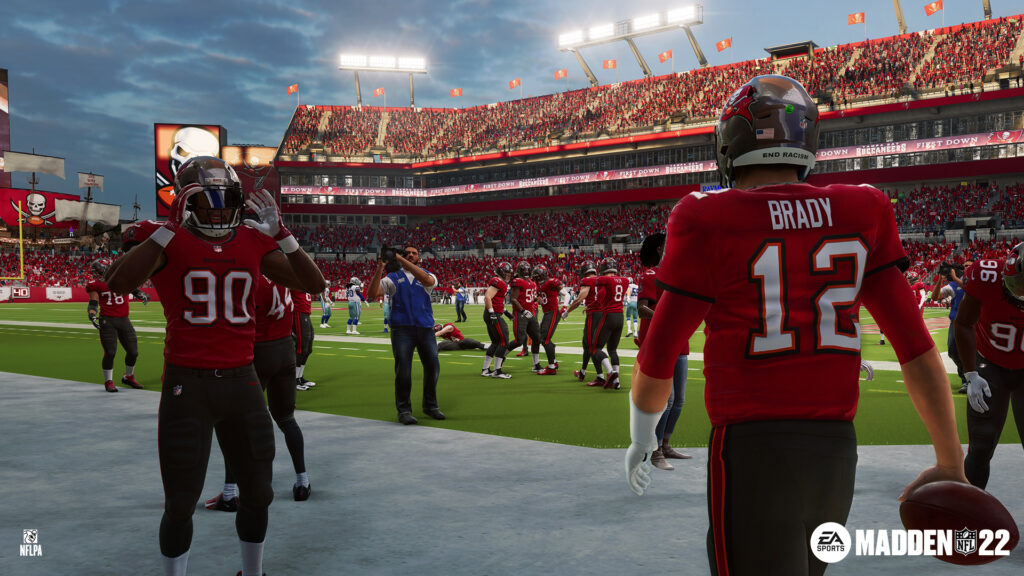 For example, in Chicago the visiting team’s kicker will struggle a bit more to kick accurately in the cold and wind that Soldier Field is so famous for. Seattle, famous for its 12th Man, will have augmented field art when home-field advantage kicks in that makes it very difficult to see the routes your players will take. In addition, teams in Denver will struggle when trying to regain energy and stamina due to the lack of oxygen.

Again, this sounds like an intriguing addition that will make each team’s home venue feel more like home. Nevertheless, this is something I need to play myself so I can get a feel for all the NFL stadiums.

This is obviously a big year for fans of franchise mode, and EA has never promised to improve a mode this far in advance, so it’s interesting to see how this will play out. The good news is that I was not underwhelmed with the new additions and improvements to franchise mode that were discussed. The bad news is I want to start my franchise today to see how it all works, but I can’t.

So, what was it that got me excited as a long-time franchise mode fan? For starters, Madden 22 will include an all-new franchise staff feature. The staff feature will give players the ability to build, grow, and customize four different coaching staff positions using an all-new RPG skill tree system.

Each coaching staff will now consist of a head coach, offensive and defensive coordinators, and player personnel coach. Each week, you will be able to upgrade your staff how you see fit via points earned and gained. Initially, there will be over 60 different items included in the skill tree to unlock and master, and more will be launched post-release.

Another new feature to Madden 22 is described as a weekly strategy session. The weekly strategy option will allow you to study your opponent’s strengths and weaknesses, and choose a modifiable game plan on both offense and defense. 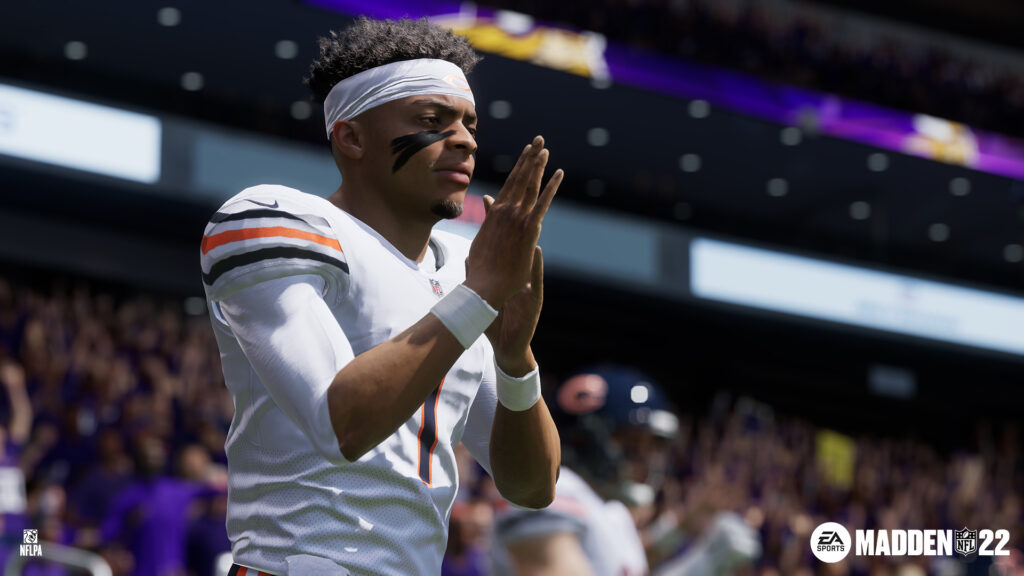 The game plan is deep and adjustable, and it allows you to tailor your game plan specifically for a certain type of scheme, play style, or even down to a single player. Not only will the information gathering and strategizing work be available against AI opponents, but these elements can be utilized and implemented against human opponents as well.

I mentioned above that each game plan is modifiable, and it can also changed or altered through halftime adjustments. Halftime adjustments allow you as a coach to look at real-time data, see where your team is performing well and where it is losing momentum, and make the proper adjustments for the second half.

Beyond that, the NFL is a long and grueling season, so an NFL coach must decide how hard to push the team in practice to get players ready for the next opponent. Madden 22 now allows you as head coach to choose practice intensity levels, the ability to split up reps, and other new options to help maintain a healthy blend of proper rest and enough reps to ensure your team is playing at max ability come game time.

The development team has also implemented an all-new season engine that, according to EA, will help mimic the ups and downs of a real NFL season. This means the decisions that players, coaches, and GMs face on a daily, weekly, and monthly basis will now be replicated during your franchise season. Each decision you make will help unlock the player or team’s potential — or set you back.

Lastly, scouting in Madden 22 has been completely revamped, and rightfully so, as this was a highly requested improvement from the community. Scouting in Madden 22 will be about assignments, and those scouting assignments will be allocated to an all-new scouting staff that will hit the road on both a national and regional level. The system will now include much deeper options to discover details never before available in Madden.

Based on the information that is gathered, players will move up and down on the big board based on the details discovered during scouting. This new scouting system will be made available in early September as part of Madden‘s live service update, so we will have to wait just a bit for it.

Now, this is not every new thing coming to Madden 22, but this first preview event focused on the above elements. Some of the other modes and options will be discussed by the team over the next several weeks as launch day draws closer. On the gameplay front, I’ll be getting hands-on time in the coming days and that will open up that avenue of things as well.

At this point, it seems like the Madden development team and the powers that be have decided to adjust and improve what is in the game already, and not rely on a new gimmick or mode to push the game to the masses.

I came away generally impressed with how transparent and open the team was during the presentation. The developers were willing to talk about past issues in terms of how they are either addressing them or planning to address them starting with Madden 22. Finally, it is also important to point out that during the presentation the developers noted that the only differences with Madden 22 on current-gen and last-gen systems will be that of stadium atmosphere and some of the player movement — although they did not go into specific details.

So that’s our first-look preview of Madden 22. We’ll have more in the coming days and weeks, but let us know what you think so far as we head into hype season.