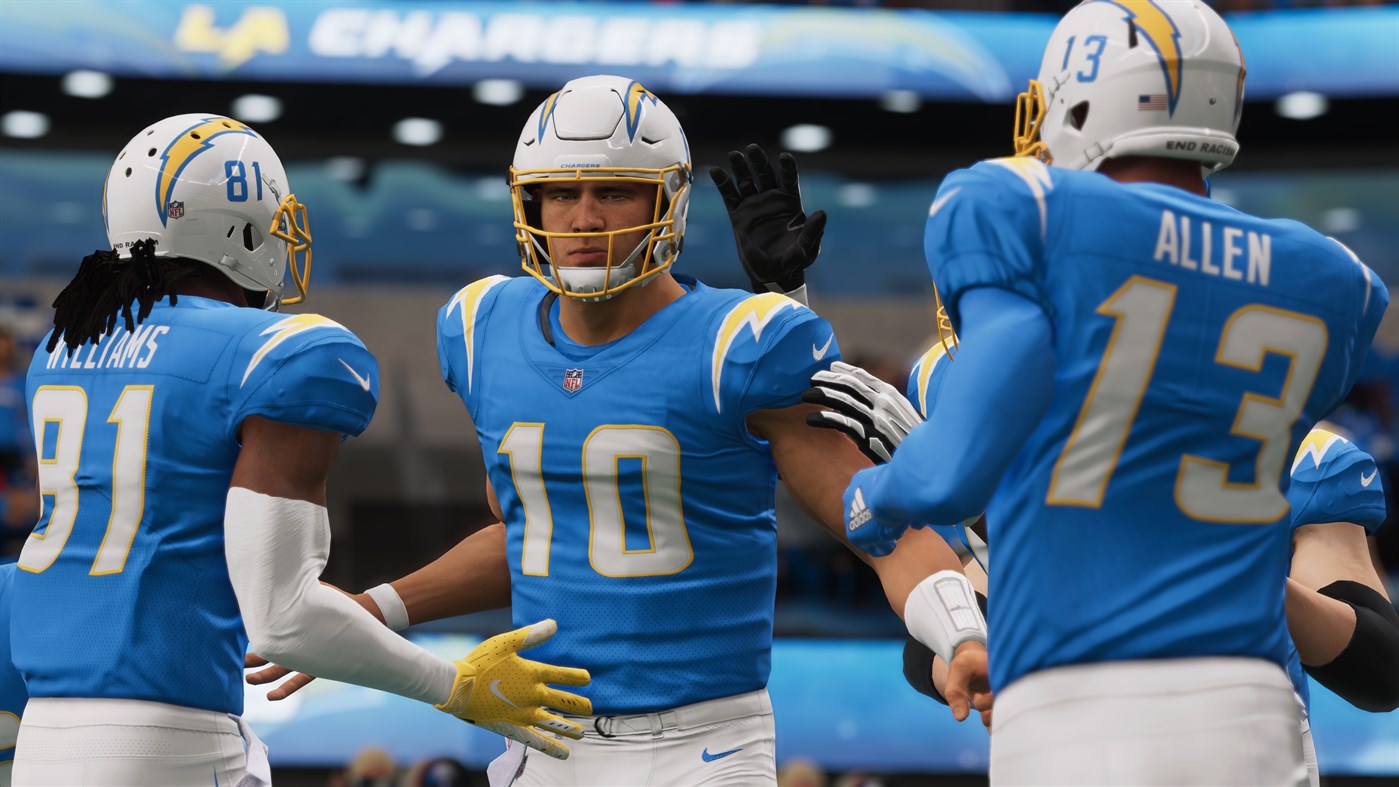 With early access for Madden 22 just days away, I thought I would share the five teams that I’m most excited to play with in Madden 22 and why. What gets someone excited to play with a franchise team in any sport can be wide ranging so I’ll be curious to hear what teams are on on everyone else’s lists as well, but I want to take you through my five teams first to set the stage.

One consistent thing you will likely see among all five of these teams is that the quarterback situation appears to be sorted out — at least in the sports gaming realm. Joe Burrow (77 OVR)  is no exception. In fact, besides maybe some of the other quarterbacks on this list, I’m not sure there’s a better franchise QB to start a franchise with this year. He has all the attributes you want in a quarterback, and the weapons surrounding him are as juicy as they may have been during his days at LSU.

Everyone has their own opinion of Joe Mixon (88 OVR), but he falls into that more-than-efficient category when it comes to Madden. He’s a running back with value in Ultimate Team as well. And my favorite thing about his skill set is what he can bring to the passing game. Mixon can do it all.

However, as cliche, as it sounds, most of Cincinnati’s success will rely on the offensive line. Thankfully, the loaded receiving corps and weapons at Burrow’s disposal will keep defenses honest. Speaking of receivers, Ja’Marr Chase (75 OVR) is just the latest weapon in an already loaded arsenal at Burow’s disposal. He might step in as the most talented pass-catcher on the roster, and that’s pretty impressive when the unit consists of guys like Tee Higgins (78 OVR) and Tyler Boyd (85). Offensively, the Bengals are as exciting as you’d expect. Defensively, they’re not too bad either.

The Bengals’ defensive front might not be as dominant as in years past after losing Carl Lawson this offseason. Still, there’s enough meat and potatoes upfront to give players the edge at rushing the passer/stopping the run. That being said, you will want to look for a way to upgrade the Bengals’ subpar linebackers. In the secondary, cornerbacks, Darius Phillips (75 OVR), Eli Apple (75 OVR), Chidobe Awuzie (78 OVR), and Trae Waynes (78 OVR) hold things down. And, of course, Jessie Bates (91 OVR) and Vonn Bell (79 OVR) make up an underrated safety tandem.

Cincinnati is going to be a fan favorite in play now. But ultimately, there will be very few teams better to start a franchise with, which may remain true for many years to come. 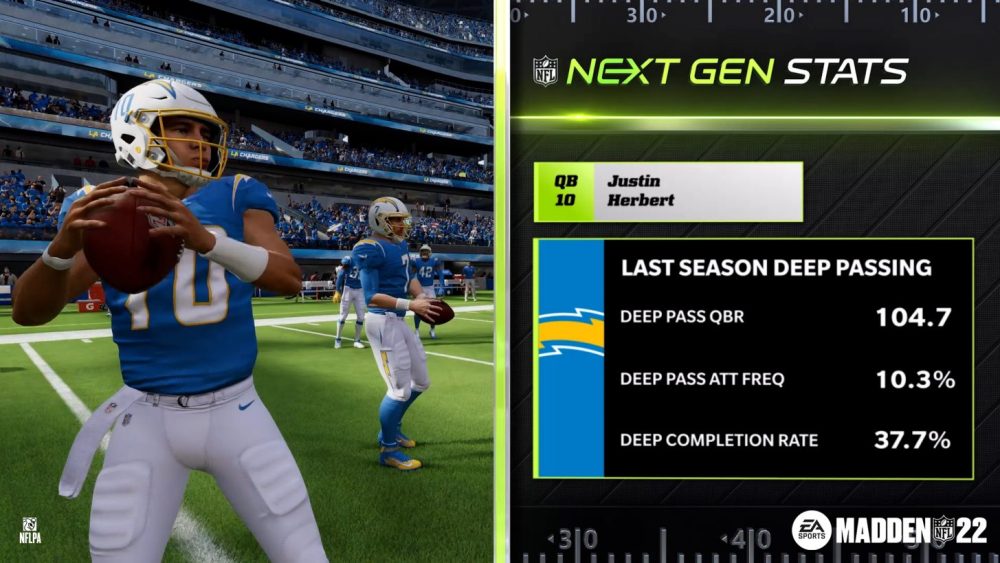 If Joe Burrow and the Cincinnati Bengals made the list, then you probably expected to see Justin Herbert (80 OVR)  and the Los Angeles Chargers on this list, as well. Herbert’s rookie season was unlike anything we’ve seen before. With the perfect mixture of mobility, accuracy, and a bazooka for an arm (93 THP), there are very few quarterbacks you’d be better off starting a franchise with, especially in Madden 22.

For as impressive as Herbert might be, the Chargers’ offensive line is quite impressive as well. And as you can expect, having time to scan the field and find the open receiver can be valuable. Right tackle Bryan Bulaga (87 OVR) is a top-five rated player on the team, and is critical in both the run and pass game.

As too are the pass catchers. Los Angeles is loaded with talented receivers like Keenan Allen (93 OVR), the highest-rated player on the team, Mike Williams (82), and rookie Josh Palmer. And let’s not forget Austin Ekeler, who can be an asset on the ground and in the passing game. Overall, the Chargers’ offense is *fire emoji* but what about the defense?

I originally thought there was no way the Chargers’ defense could be on par with the offense — and maybe it’s not. But the defense has a ton of young talent all over the roster. Talent that is going to be ranked among the #elite in this year’s game. I mean, Derwin James (88 OVR) is a real-life Madden baller, and let’s not forget Nasir Adderley (73 OVR).  Jerry Tillery (74 OVR) and Joey Bosa (92 OVR) make opposing quarterbacks miserable. Finally, let’s not forget players like ILB Kenneth Murray (78 OVR), CB Chris Harris Jr. (87 OVR), and rookie Asante Samuel Jr. (72 OVR) can all be long-term contributors.

The Chargers will naturally be one of the top teams to use for longer-term franchises, but don’t be surprised if many gamers outside of LA jump at the opportunity to use the Chargers in general.

Say what you want about Alabama quarterback Jalen Hurts (71 OVR), but the type of player he can be with the football in his hand is truly unique and rare. The first player who comes to mind when you take off with Hurts (87 SPD) on a critical third and long is maybe the right-handed Michael Vick? Obviously, Lamar Jackson is the closest thing to Michael Vick that we’ve seen in Madden, but Jalen Hurts is equally as explosive. He feels like a cheat code. Maybe that’s because he can make all the throws, too. He is a special player, but he’s not the only player on Philadelphia’s offense with talent.

Running back Miles Sanders (81 OVR) is one of the better backs in football. And while I won’t sit here and shout his overall rating from every rooftop, I can say that he will feel different than some of the other backs. Sanders is explosive, but best of all (for Madden, anyway) is he’s a good pass catcher. And let’s not act like we’re not all daydreaming of using the dreaded RPO this installment.

Rookie wide receiver DeVonta Smith (75 OVR) is Philadelphia’s big addition this offseason, and he’s sure to be one of the most dynamic playmakers in Madden. Heck, I’d go as far as saying he will be one of the better players in the NFL. Speed kills (91 SPD), and he has the route running and hands to back it up. Other weapons include Jalean Raegar (73 OVR), Dallas Goedert, Zach Ertz (80 OVR), and Greg Ward (73 OVR) rounds out the wide receivers.

Defensively, Philadelphia has an impressive defensive line that always finds a way to be disruptive. That obviously starts with Fletcher Cox (94 OVR), one of the top defensive tackles in Madden. Derek Barnett (76 OVR) and Brandon Graham (85 OVR) are also excellent assets. In addition, though, the Birds could probably use an upgrade at linebacker to shore up the middle of the defense.

Philly’s secondary has Darius Slay (88 OVR), Avonte Maddox (77 OVR), and a few other valuable pieces, but this will probably be one of the first areas you address as Philadelphia’s new general manager.

Let’s not forget the Eagles’ iconic kelly green jerseys or the black on black on black that will surely look awesome with Jalen Hurts at the helm. I think the Philadelphia Eagles will be one of the more popular teams in Madden this season, and that makes me low-key excited. 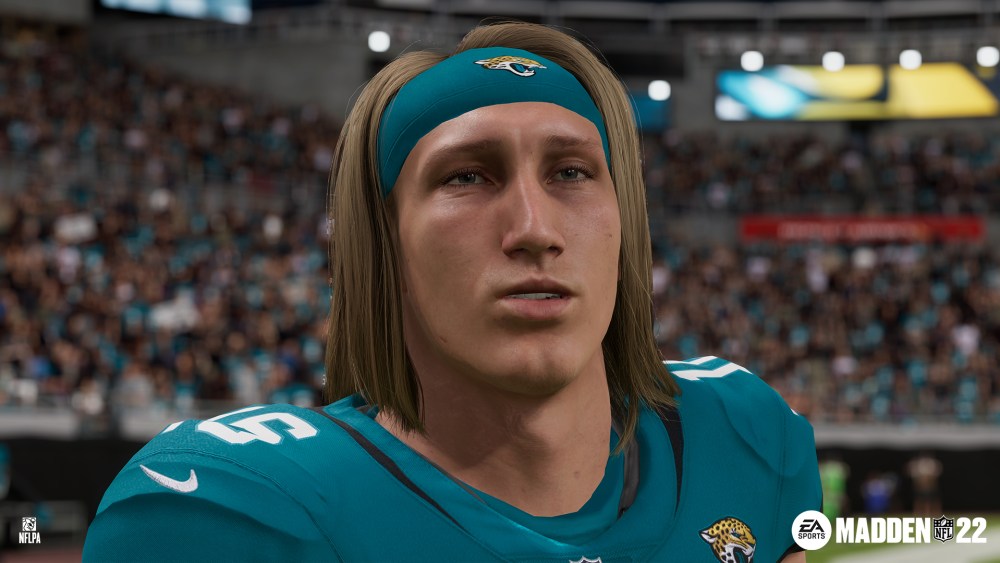 Now that Urban Meyer is in Jacksonville, the culture in the AFC South has quickly started to shift. It also didn’t hurt that they brought in arguably the greatest quarterback prospect since Andrew Luck. Of course, I’m talking about the 2021 top overall pick, Trevor Lawrence (78 OVR). Lawrence is a special talent who can become one of the better quarterbacks in Madden sooner than later.

Lawrence’s weapons might be the most fun of all. Not only do they have two outstanding running backs in Travis Etienne (76 OVR) and James Robinson (86 OVR), but the team is also loaded with pass catchers. Marvin Jones Jr. (83 OVR) and D.J. Chark (81 OVR) are the Jaguars’ top two receivers. However, it’s Laviska Shenault (88 SPD?), the speed demon from Colorado, who has the potential to be the most game-changing of the bunch.

The offensive line is stout with Brandon Linder (84 OVR) at center, right guard A.J Cann (74 OVR), and left guard Andrew Norwell (82 OVR). The Jaguars’ offense is going to be nice.

(I need to make sure everyone knows that James Robinson is the Jaguars’ best overall player.)

There are plenty of pieces on the defensive side of the football, with my favorite being linebacker Myles Jack (86 OVR). He can play sideline to sideline, and for someone who likes to user the linebacker, he sure is an intriguing part of that defense. Shaquill Griffin (85 OVR), the new addition from Seattle, will be lockdown on the outside. Josh Allen will be coming the EDGE, plus C.J. Henderson (78 OVR) and Sidney Jones (78 OVR) will be at cornerback.

Urban Meyer’s Jacksonville Jaguars are going to be a gamer’s best friend because, in the end, SPEED KILLS! 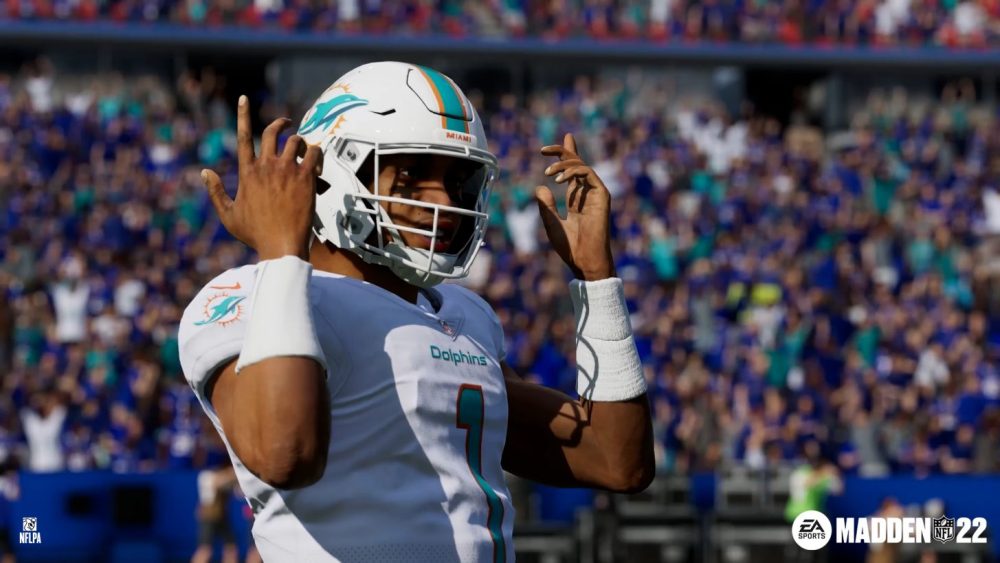 Hi, I’m a Dolphins fan. I probably would’ve included the Miami Dolphins as a bonus team in my top-five countdown in past seasons. But then, I probably would’ve followed it up with a rant about how awesome of a team they were, not believing any bit of what I was saying. But not this year. This year might be the first time I actually believe in what this team is building in a long time. And when you look at all the speed Miami has on offense alone — Jaylen Waddle (the highest-rated rookie wide receiver in Madden 22 with a 76 overall), Will Fuller (85 OVR), DeVante Parker (84 OVR), Jakeem Grant (74), plus the rest of their wide receiver — you can see why they’d be such an exciting team to use in Madden 22.

But like I have touched on throughout this article, none of those weapons matter without a franchise quarterback. And although Tua Tagovailoa is only rated a 73 overall, he still comes fully equipped with a superstar development trait. His skills perfectly fit the style of offense, as well. But it’s not only Miami’s offense that should have folks excited. Brian Flores’ defense is the real reason behind Miami’s success.

(Note: If  you do decide to use Miami, please be warned that their offensive line is #notgood)

Defensively, the Dolphins were one of the better teams in football last season. So when you take a talented team with shutdown corners like Xavien Howard (91 OVR) — who should get an X-Factor designation, but probably only after he’s traded — and Byron Jones (88 OVR), and then also include a playmaking linebacker like Benardrick McKinney (80 OVR), it explains how they got there. In addition to bringing in rookies Jaelan Phillips (72 OVR)  and Jevon Holland (74 OVR) this past April, all of their emerging pieces like Jerome Baker (78 OVR), Raekwon Davis (74 OVR), and Andre Van Ginkel (77 OVR) add to the riches here. Miami’s team really is special (on paper), and even if I weren’t a massive Dolphins fan, they would be one of the most exciting teams to use in Madden 22.

Which team are you most looking forward to starting a Connected Franchise with this Madden season?