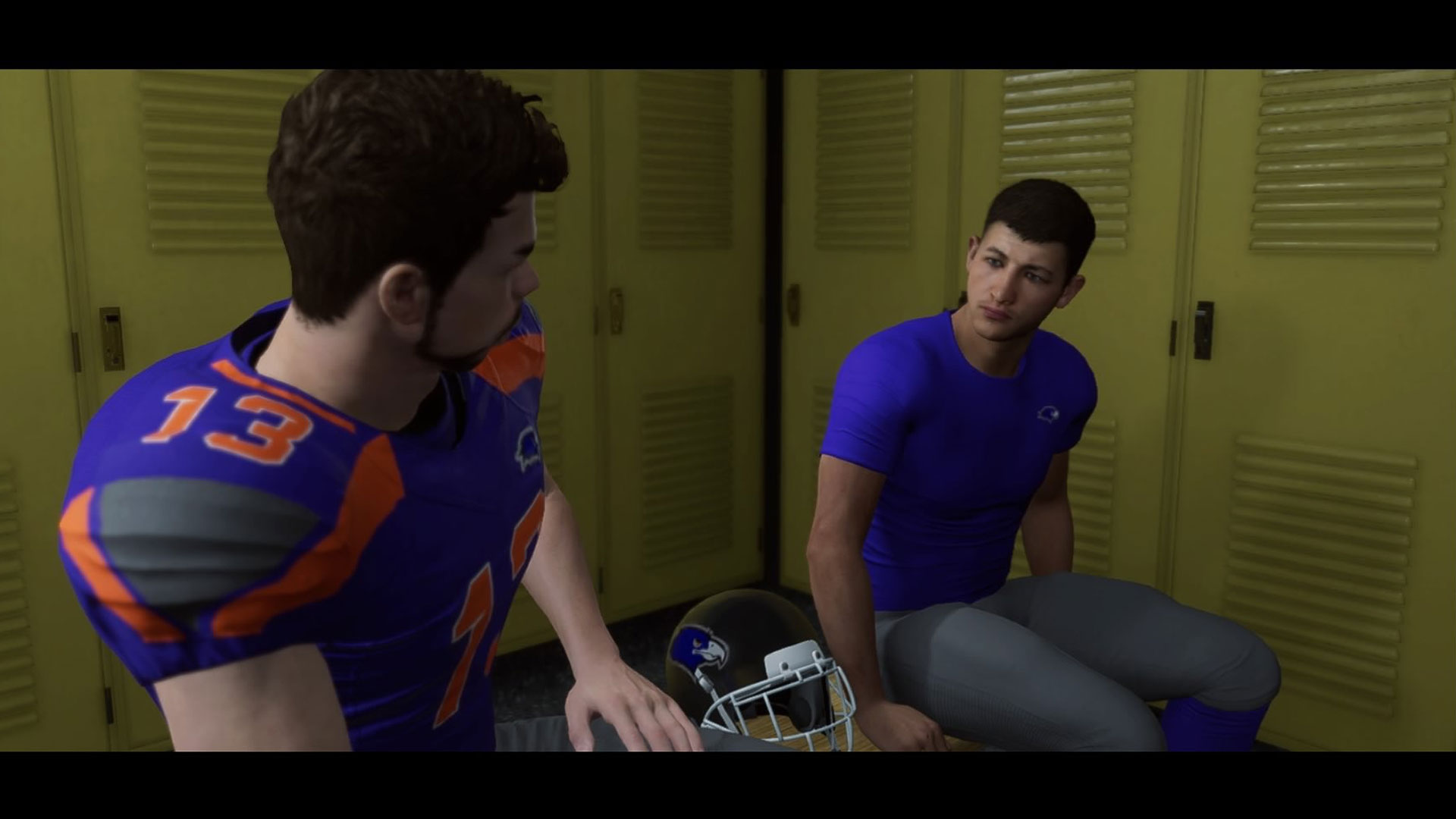 When I first heard that EA was going to re-implement a single-player RPG-style game mode a couple years back, the first thing I said to myself was “what took them so long?” The truth is that for many years NBA 2K and, to a greater extent, MLB The Show have successfully created single-player story modes with a ton of RPG elements bolted onto them. 2K leans into the story more than The Show, but the point is both provide hours and hours of content.

Madden started slowly with Longshot and Face of the Franchise: QB1. I would say these were not quite what many had hoped. Longshot was all story more or less, and it was a decent first attempt, but the second year was worse in general. QB1 started off really strong to me, but then it faded very quickly. However, what the hope was here for me was that a foundation was built for the future of Madden. So, how would the Face of the Franchise this year?

Here is the good, the bad and the ugly of Madden 21‘s Face of the Franchise mode.

Madden 21 Face Of The Franchise Review

Like most NFL draft prospects, it’s not about the players they are in the present, but what they can become with the right coaching and development. That’s the same way I feel about Madden 21‘s Face of the Franchise.

To have the option to create your player and work his way from a high school prospect to NFL superstar seems like a winning formula. EA must now continue to implement new and exciting ways to keep folks engaged.

Allowing players the opportunity to change positions this year is a much-needed change. And the additional storylines added are excellent as well. However, I would eventually like to see each position trigger its unique storylines and objectives. 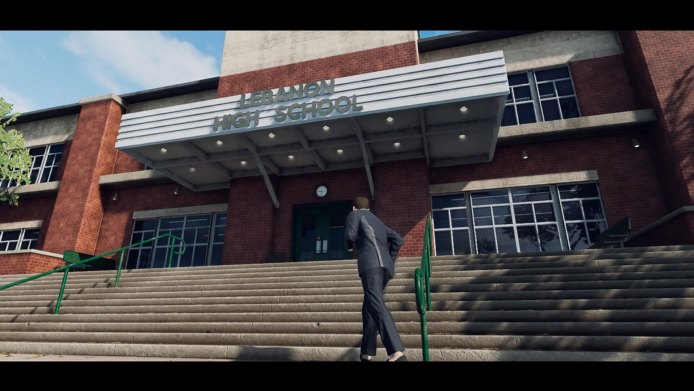 Last year, users were thrown right into the action at the collegiate level. In Madden 21, EA is going back a little further in your player’s development, starting with your prospect’s early years in high school.

Players can name their high school whatever name they’d like, which is a double-edged sword as you might imagine. Nevertheless, being able to start your career in HS is nice. This also allows players to pad their stats on rookie difficulty.

It seemed odd that EA wouldn’t find a way to add the most prestigious drill at the combine into last year’s game, but we were forced to wait. Well, the wait is officially over. Now, your created player can try to break John Ross’s record and show a team like the Raiders you belong in the NFL. Hopefully, we’ll see a few more combine drills added in the next generation of Madden.

There’s also a pivotal press conference that will help NFL teams get a better feel for what type of player you are off the field. All of this is an excellent addition. 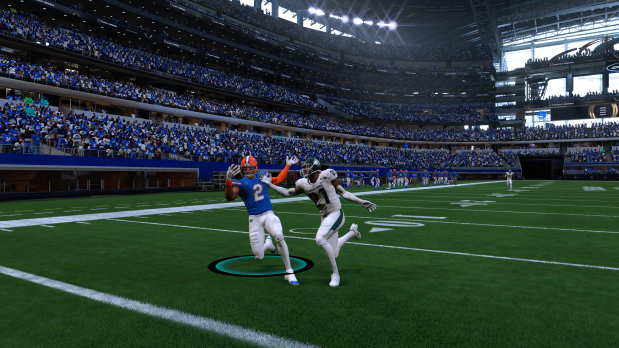 Without another NCAA game on the horizon, EA continues to keep players guessing with their use of collegiate teams in Madden 21. But what remains most frustrating is that they have failed to implement even a basic version of the NCAA here.

I mean, there are already NCAA teams in the game. Why stop at just a few games at the collegiate level? Why not expand and give gamers a bit more time to make an impact at a respected university before making the jump to the NFL?

When playing Face of the Franchise, the primary objective is to create a legacy for your create-a-player. So, as you’d expect, having good options to make an accurate representation of yourself is of the utmost importance. Unfortunately, this is one area where EA falls exceptionally flat.

Not only are most of these models the same ones that have been regurgitated for many installments, but most of the options fall flat and left me yearning for more.

It also doesn’t help that there’s not a single long hair style in the game. And for someone that has long, flowing locks like Troy Polamalu, this is a letdown.

Here’s to hoping EA adds more layers and an inevitable face scan (one day Game Face will return) in the future.

There were many issues with QB1 last season, but one of my biggest gripes with the new game mode is the story. Yes, I understand there needs to be a story to keep gamers interested, but adding a tragic health risk is probably not the way to go about things. 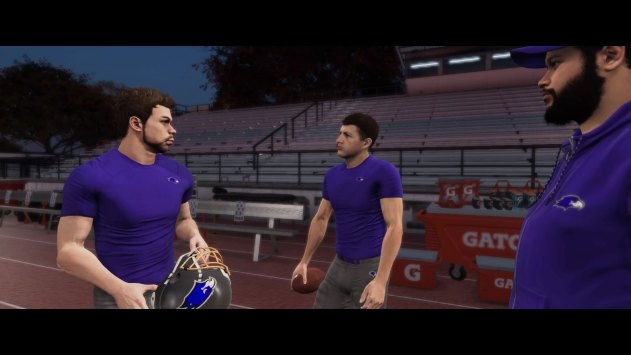 Truth is, I would probably prefer a story mode where a promising young prospect embraces the competition of becoming the team’s starting QB. I also think giving users the opportunity to befriend teammates and make more decisions both on and off the field that impact the outcome would be welcomed additions here.

Again, I think there are some positive things to build on. But overall, EA’s attempt at a football story mode has left me and many others wishing for more.

I know EA received a ton of backlash for the lack of time spent on “classic” franchise mode this year. But as I see now with Face of the Franchise, once you make it to the NFL the mode quickly shifts from a “meh” story mode to a franchise-lite mode.

Could this change as Madden gradually churns out updates to franchise mode? Maybe. But for now, Face of the Franchise appears to be nothing more than “classic franchise” mode with a decision-riddled prequel.

There has to be a foundation for Madden’s single-player game mode. However, I would like to see it stand out on its own and become more like NHL’s Be A Pro or MLB’s Road to the Show.

I wanted to feel differently about Face of the Franchise. There were times when I’d put the game down or start over in an attempt to take a new approach. But at the end of the day, this mode missed its mark wide right once again.

Someday I believe it will all come together for Face of the Franchise. But for now, it’s nothing more than a late-round prospect with tons of warts and room for improvement.