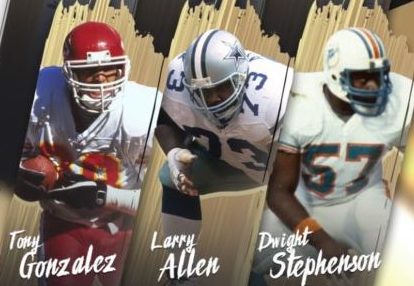 The NFL 100 does not stand out this week, which is a first overall during these first four weeks of content. However, when five of the six players are players you never technically control, that checks out. Still, let’s get to the player reviews for Week 4 of the NFL 100 in Madden 20 MUT. 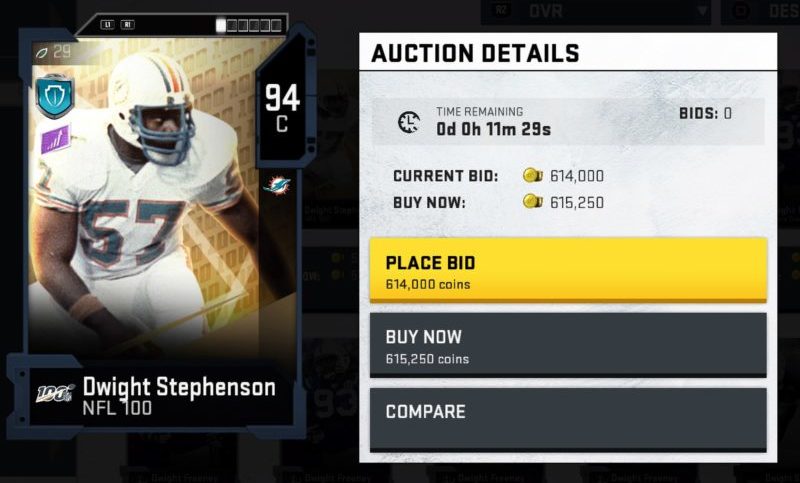 Stephenson is competing against Matt Birk and Travis Frederick for king of the centers. It’s hard to declare him the winner, and I will say this upfront before getting to the other linemen, it’s hard to get too high on any one of these NFL 100 offensive lineman because of the inherent weaknesses with blocking in this game. With certain contain blitzes being evil, with lining up directly over hall of fame linemen still leading to them sometimes totally whiffing on a block of someone right in front of them, and some other smaller issues with offensive lineman AI, I am a firm believer you do not overpay for this portion of your team. it’s the one group you have zero control over beyond how you control them pre-snap, and so you’re at the mercy of what the AI does play to play.

That being said, I think Matt Birk is still the better player over Stephenson, and Frederick costs one third as much as of now and more than holds his own. It’s nice for the Dolphins to get a great NFL 100 player because their theme team stinks, but it’s a shame it’s a center. I think you pass on Stephenson for now. 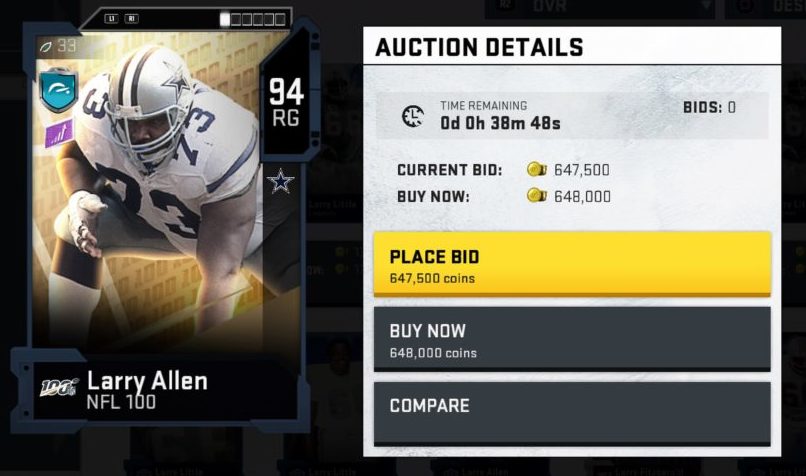 Larry Allen really does not have to compete against a ton here. I said yesterday that Marshal Yanda should be the guy you snag in Gauntlet 2 because RG is a rather weak position overall in MUT so far, and I think that point remains. The Yanda is “free” while this card is 600K or so right now.

Allen is the best at RG, and yes, that does include Yanda. It’s not close either, and I expect Allen to continue to hold this down for the foreseeable future. That being said, I still think Cowboys theme team owners are the only ones who should get really hyped. Once we get through a couple more releases, the Cowboys will have the best offensive line in the game, and I doubt it will be incredibly close. 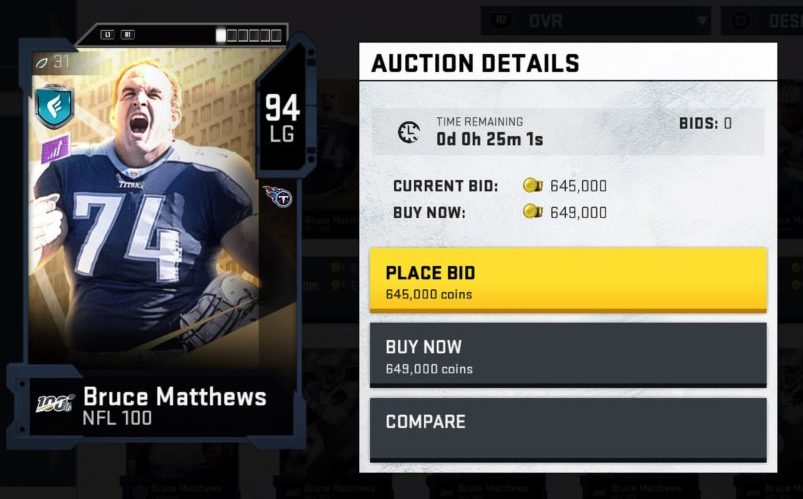 Bruce Matthews is another player who has free reign at his position now. Harvest Quenton Nelson and Gene Upshaw are a clear tier below him as of now.

Matthews is my pick for best lineman from this NFL 100 set. You’re getting an obvious best player at his position, and while the cost is high, he’s the most well balanced player in this release. He has 70 speed which lines him up with Upshaw, but then he beats Upshaw in other areas. I’m not paying 650K for any of these guys, but Matthews is the guy to splurge on (if any of them) if we’re removing theme teams from the equation. 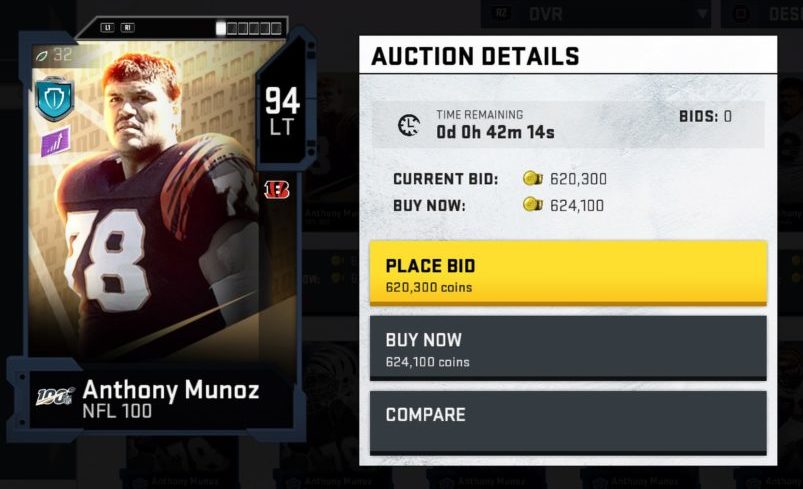 I believe Munoz will be the most “meta” player from this release, if only because a lot of people are probably tired of using Joe Thomas. Munoz is better than Thomas in every way as well, so there is that if you want to pay the 200K+ difference in cost to get Munoz.

So Munoz has decent speed, and he’s going to be able to handle just about anypne in one-on-one situations assuming nothing weird happens with the AI during the play. He’s very important for this run meta, and so I understand if people dive in and pick him up. I do think you’re still going to be more than fine with Joe Thomas, but there is no question Munoz is an upgrade over Thomas. 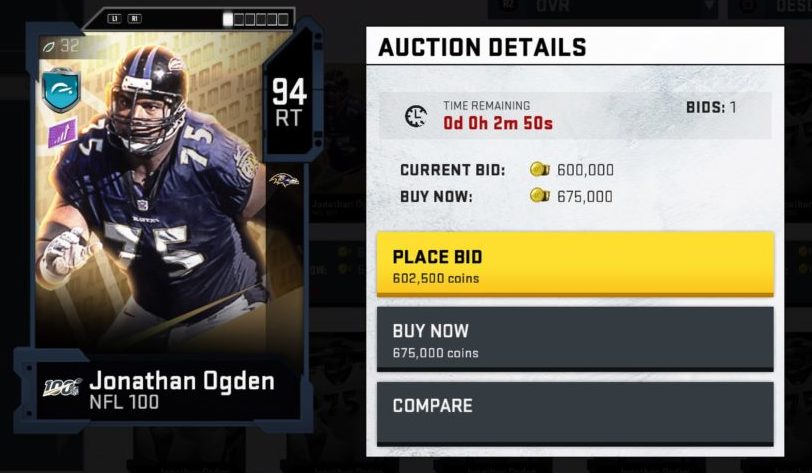 Jonathan Ogden got position-swapped by EA to move him to right tackle. He can still move to LT, but he’s competing with Blitz Lane Johnson and Ultimate Kickoff Ryan Ramczyk for top honors at left tackle. With this one, I don’t think he clearly wins out. Lane Johnson is much faster, albeit a worse blocker. Ramczyk does beat out Ogden with footwork for pass and run blocking.

Ogden is just a bit on the slow side. The blocking overall is unquestioned, but in some ways this is the weakest of the offensive line releases because the cheaper options still have clear strengths over him. At other offensive line positions, I don’t think that same case can be made (except maybe center). 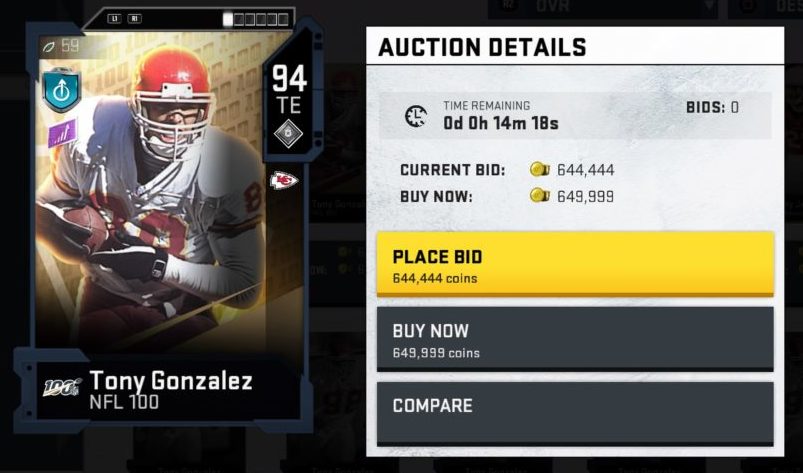 Speaking of misreading the room, Tony Gonzalez is a tough look for the NFL 100. He is such a bad blocker that I think he is a non-starter for a lot of people. George Kittle is a better blocker than Gonzalez in every way, and just destroys him as a run blocker, which is obviously important in this absurd run meta we find ourselves in day after day.

Look, Tony G is very good. However, he is not far and away such a dominant receiver and user after the catch that he’s worth the downgrade in blocking at the top tier. Max Security 100 is great and 90 carrying is also awesome at tight end, but I have a hard time believing many people will absolutely want this card as their starting tight end when factoring in the cost.