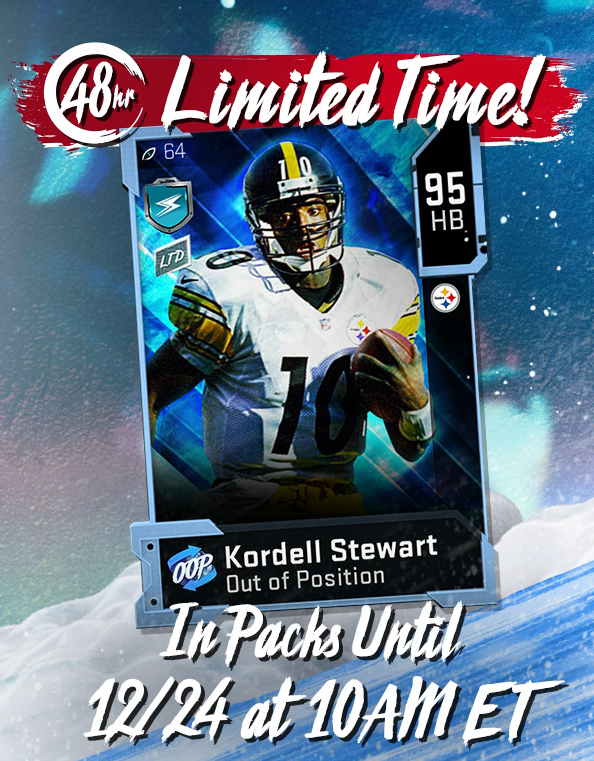 Kordell ‘Slash’ Stewart is someone I am extremely fond of considering I grew up as a Steelers fan during his heyday. So yeah, this Kordell Stewart MUT review may be a bit biased, but at least you know that going in, right? With that being said, let’s get to his Out of Position card. 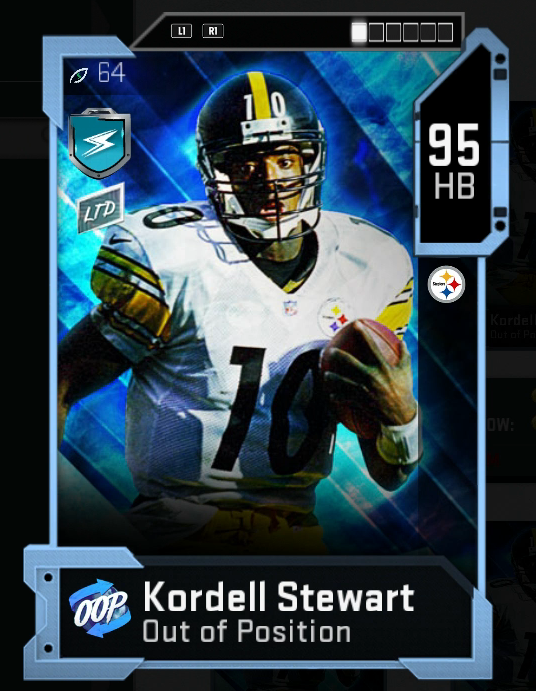 Kordell was the lone card that came out on Sunday. He is Limited, and his price has already dipped quite far from a high of well over a million coins down to about 400-425K. That price will continue to fall because he is going to be tricky to fit into many of the most “meta” lineups.

The whole reason to do this Kordell Stewart MUT review is to look at his versatility. In that way, Stewart gets me dreaming about super weird offensive lineups once again. Those lineups would perhaps include Taysom Hill at QB or maybe even at TE. However, the issue with those lineups is that they don’t end up actually being that good. They’re fun and goofy, and it’s a nice change of pace to get away from the normal meta, but you have to understand you won’t win with any consistency.

That being said, even though Kordell Stewart does not get a lot of the best abilities, he’s not a bad running back. Still, the issue beyond the abilities is the same for any non-NFL 100 HB in that he just does not start with an X Factor engaged.

On top of that, he has a few other issues that drag him down a bit more than I would like. His catching is not incredible, and he’s also not a good enough QB accuracy-wise to really work in Wildcat sets. It also does not help that Wildcat pass plays just are not that good or diverse in Madden. I don’t know enough about the variety of Wildcat plays in the real NFL to give a great opinion here on accuracy, but in Madden you’re limited in what you can do.

It’s not easy to get him at QB in any other way, so even if those plays were good, it still would limit his usefulness. I understand why you can’t just sub him in at QB whenever you want, but it just feels like it’s hard to use Kordell Stewart the way the old Steelers did considering that shortcoming. This, in conjunction with his less than ideal receiving and running attributes, means he’s just sort of middling in a bunch of areas.

Kordell Stewart is absolutely still versatile, but versatility is not really something you need this year, and it’s a reason why these Out of Position players generally struggle to find a home in Madden. Stewart is still fun to use, but without a Power-Up or some playbook additions, he won’t be of great use most of the time.

Our Madden 20 Zero Freeze guide has also been updated to include Kordell Stewart.