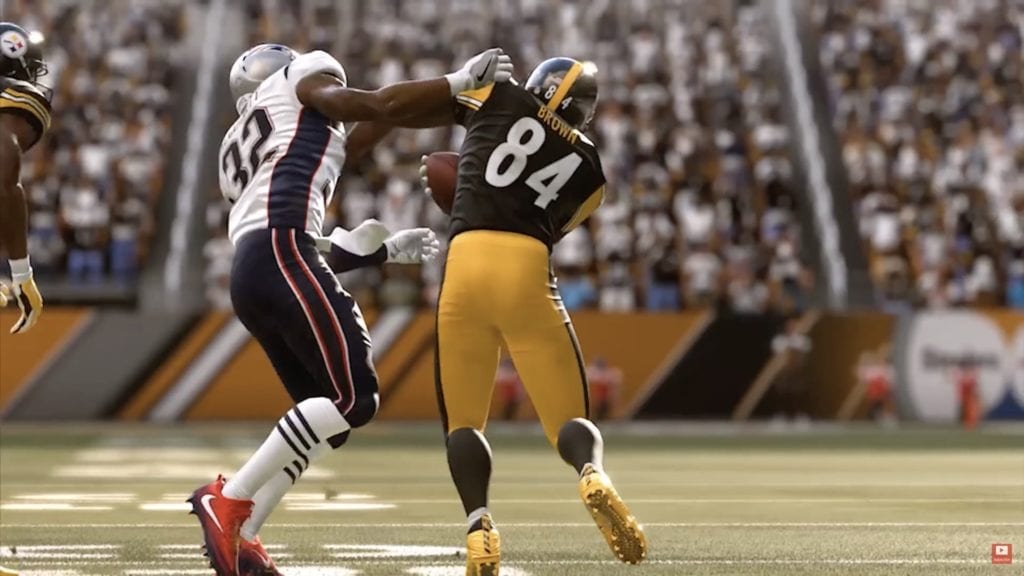 With a little over 3 weeks until the standard edition release of Madden NFL 19 on August 10, EA has revealed that Pittsburgh Steelers Wide Receiver Antonio Brown will grace the cover of the game. Brown is one of the most dynamic and boisterous personalities in the NFL today and his inclusion alongside Terrell Owens on the Hall of Fame edition cover, comes as no surprise.

To coincide with the cover announcement, EA has released a new trailer for Madden NFL 19 that is mainly showcasing the real life AB, but it also contains a couple of new tidbits of game play and presentation aspects for this year’s game. Let’s break it down.

00:00-00:04 Antonio Brown in full uniform appears dancing to a song while the EA Sports Madden NFL 19 logo splashes across the screen.

00:05-00:07 The in-game version of Brown is shown during team introductions, and he is wearing the new Nike Vapor Knit 2 gloves that are now in the game. Looking closely you can also see his signature eye black design, also new to Madden NFL 19.

00:07-00:09 The first real game play is shown with AB going up high in double coverage to bring down a two-handed aggressive catch against the 49ers’ Ahkello Witherspoon and Adrian Colbert.

00:09-00:12 Brown fights through a Bengals double team tackle before briefly showing one of the new team Touchdown celebrations that are in Madden this year. The scene switches to Brown making another leaping catch against the Bengals before showing him stiff arming Patriots safety Devin McCourty.

00:12-00:17 The trailer goes back to the real world Antonio Brown but in the middle of that, the Madden version of Brown front flips into the end zone in what looks like a new TD celebration/taunt.

00:18-00:20 Real Player Motion is shown off in this snippet as Brown performs multiple juke moves against Patriots defenders. Foot planting is well represented and overall looks really good in this brief clip.

00:20-00:22 Antonio Brown is shown on the sideline from behind and he looks to have his “Wild Thing” style haircut in the game.

00:23-00:34 The trailer ends with Antonio Brown doing various dance moves in full uniform as a congratulatory message appears on screen for AB before transitioning to a static image of AB with pre-order information on screen.

It was a typical sizzle trailer from EA but did contain a couple of interesting tidbits of information. EA seems to be really going all in on celebrations so it’ll be interesting to see how much, if any, of the dance moves done by AB in the trailer actually make it into Madden NFL 19. The new equipment looks good and like we’ve come to expect of past cover athletes, the attention to detail shown in Antonio Brown’s player model is excellent. Real Player Motion will be a huge part of the game this year so it’s no surprise that it was one of the things featured when game play was actually shown in this trailer.

The two-handed aggressive catch against the 49ers looks like a new animation and I’m sure that catch animations will be revamped for this year. Typically, something new is added to the game that represents the cover athletes such as the introduction of catch types when Odell Beckham Jr. was on the cover, to the unfortunately impractical target passing introduced for Tom Brady’s Madden NFL 18 cover. With both the standard and Hall of Fame editions of Madden NFL 19 having Wide Receivers on the cover, it’ll be interesting to see if EA has a surprise or two up their sleeve.