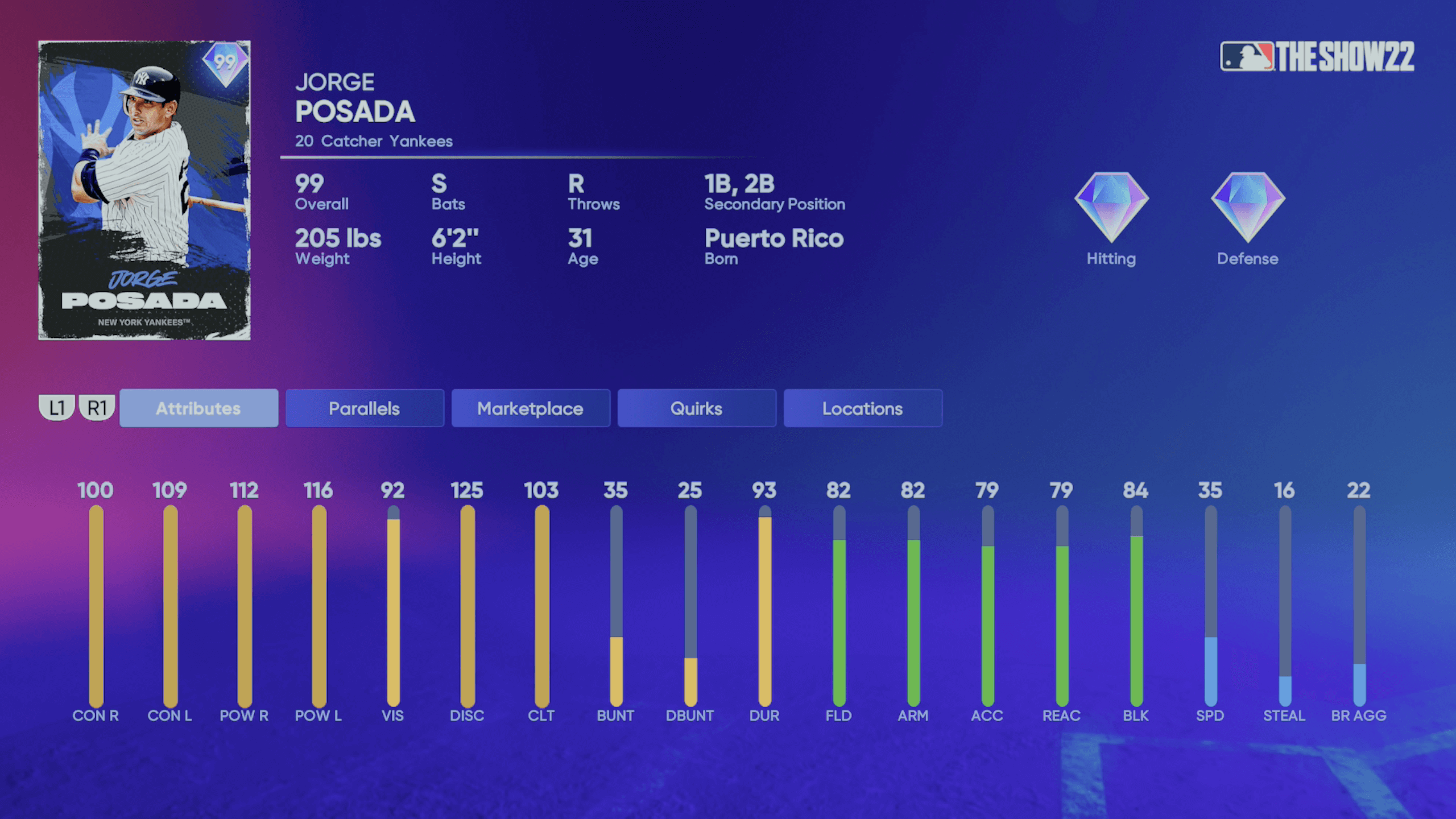 Time continues to conquer us all as we’ve reached the end of the MLB regular season. The content has been pumping since launch in early April and we’ve looked back at each program all season. It’s been a ton of fun to recap each respective program and talk about the Boss cards and how they stack up compared to each other. While Legends of the Franchise isn’t the final Featured Program of the year, it’s definitely one of the last big programs we’ll be seeing so let’s talk about it.

Legends of the Franchise Program Recap It’s a given that cards featured in Diamond Dynasty get stronger as the year goes on. Power creep exists in every card game, from MLB The Show to Madden to Yu-Gi-Oh! and Magic: The Gathering. It’s a necessary function of each respective game and is the main catalyst of excitement and anticipation that keeps players engaged. The debate and conversation about the best cards available, the analysis on which cards are superior, and the speculation about the cards to come. It’s all very relevant and essentially the building block of Diamond Dynasty each year. So it wasn’t surprising that Legends of the Franchise ended up being the best program to date. It should be! But man was it surprising how powerful some of these cards ended up being.

Bring On The Legends

The name value alone in this program was off the charts. Tony Gwynn, Rickey Henderson, Mike Schmidt, Hank Aaron — some of the biggest names in Diamond Dynasty. Surround those guys with a ton of community favorites and new legends and you have the perfect recipe for an amazing program. What truly set this program apart was the insane attributes that some of these legends possessed.

Every program features big names. It’s the entire draw of Diamond Dynasty. But more often than not, there ends up being a sense of disappointment with some of the bigger names that get released. Sure, it’s always a good time to get your hands on those cards but how many times have we been underwhelmed? Last year, one of the biggest new additions to DD was Pedro Martinez and the wait was on for that epic 99. Then that 99 overall Pedro got released and it was universally heralded as “unusable” due to some key attributes and how they compared to other cards already available. Every year we see disappointing Boss cards.

But this Program changed the game. Literally.

While Legends of the Franchise certainly featured some clunkers (lookin’ at you Cy Young) it’s undeniable that the overall content drop was insane. We already discussed the sheer name value within the drop, but the attributes on some of these dudes brought the house down.

My power rankings will tell you exactly how I felt about the entire group, but even looking at some of the mid and lower ranked cards will reveal spicy attributes. And it’s not just the numbers tied to the attributes, but for some of these players we got attributes we never could have dreamed about being real. 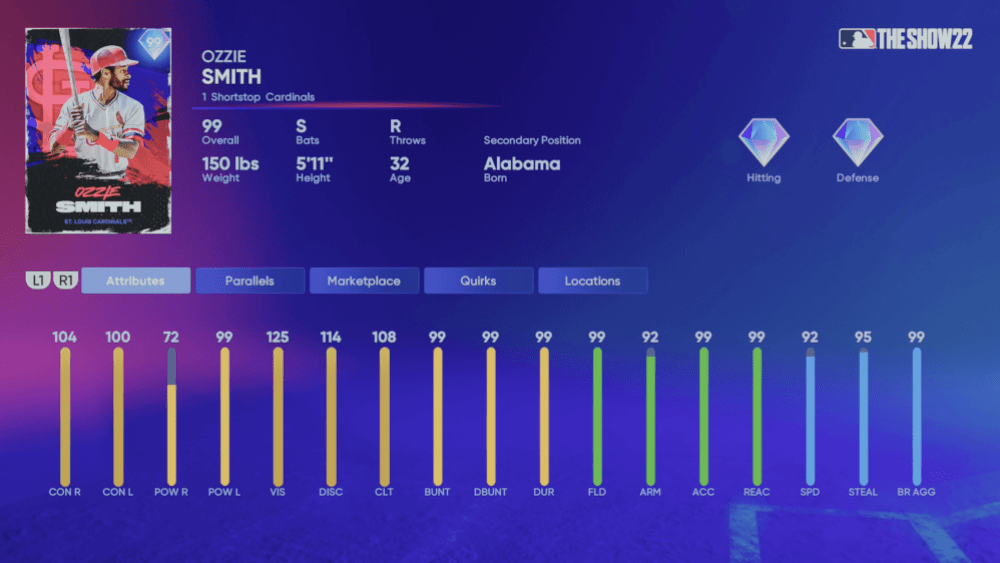 Ozzie Smith is the perfect example. I ranked The Wizard as the 28th best card in this program. I don’t think there’s anything too special about him and at the plate I find him to be a clear pass. Compared to the other SS cards in the game, this card doesn’t come close to being a top candidate. But as far as Ozzie Smith cards go, this Legends of the Franchise version is easily the best we’ve seen.

Any Ozzie Smith card having a power attribute above 90 sounds like a “custom made” card that a huge Ozzie Smith fan would cook up. To see it actually exist within the game is a fever dream. And it’s awesome.

I don’t think this card is good. I’d never willingly use it if I wanted to win a competitive game. But there are a ton of people out there who don’t look at Diamond Dynasty the way I do. Having a player like Ozzie Smith get a card like this certainly brought a smile to someone’s face out in the community. I said it within the power rankings, but I’ll repeat it here: sometimes we’re too critical of cards because of their attributes. I’m as guilty of this as anyone and yet I’m still glad this card exists. Variety is the spice of life and it’s the perfect seasoning for a Featured Program to make it stand out against the others.

Juiced To The Gills

Along with the surprising cards like Ozzie Smith, we got cards that were even better than expected. Edgar Martinez has been in the game for a bit but his best cards have always been underwhelming. This prompted the question “does Edgar deserve better cards?” He’s a Hall of Famer and spent most of his time as a DH for the Seattle Mariners of the ’90s. He’s an icon from my early childhood and a great name to have in the game. But his cards just never seemed that good, so he didn’t garner a ton of consideration within Diamond Dynasty.

Then this happened. Edgar finally got a juiced-up card and more people than ever have been using him. I don’t think I’ve ever rostered an Edgar Martinez card until this content drop. He made his way to my bench fairly quickly because the attributes lined up and it was fresh. If there’s one word that I could use to really describe this Featured Program, it’s fresh. It lead to familiar names getting better cards than we’re used to and finding themselves in the thick of the “meta” discussions.

Another layer to this program was community favorites getting even better cards than normal. The two guys I’m going to highlight specifically are Steve Finley and Jorge Posada.

These two players get a lot of fanfare each year purely based off swings. It’s a discussion every year on the “best swings” in Diamond Dynasty, which basically distills down to cards over-performing their attributes. Steve Finley and Jorge Posada are always shining examples of what a swing can do no matter what the attributes say.

And then these two cards are what happens when you add insane attributes to those amazing swings. These two cards went into my top three for a reason. Even as the year goes on and we get the mega-name guys like Ken Griffey Jr. and Babe Ruth, Steve Finley is still going to be a viable card. You could make every argument to line Steve Finley up in your OF no matter who else comes out. Jorge Posada is a switch-hitting, power-hitting catcher that possesses that otherworldly swing. Is the upcoming Retro Finest Joe Mauer superior attributes-wise? Absolutely. Mauer has an amazing swing of his own and will be deserving of the “best catcher” designation. However, this Posada card still warrants consideration even with the attributes not being as strong.

The big takeaway here is that big word: variety. Joe Mauer and Ken Griffey Jr. might be two of the very best cards in the game. But if you’re a Diamondbacks or Yankees fan, or you just really like Finley and/or Posada, you aren’t really sacrificing anything attributes wise if you use them. The one sure way to create ultimate lineup diversity is by creating cards like this.

Versatility Is Thy Name

Big names and huge attributes. Check and check. What else could this program possibly offer? Oh, how about unexpected positional versatility that creates even more possibility with lineup construction?

You see this on the Posada card above. Posada has 1B eligibility, which isn’t really new as catchers often have 1B eligibility. But the Legends of the Franchise Posada can play 2B. He shouldn’t play 2B on your team but he can. The level of absurdity in this reality is what video games are really for, right? But he’s not the only catcher who can man The Keystone.

Hall of Famer Ivan Rodriguez can also play 2B and ends up being incredibly useful there from an attributes standpoint. Posada is slow and the defense would be spotty, so that lack of range makes him a tough sell there. But Pudge will have diamond defense at 2B with a potential max speed of 75 after parallels. That’s not bad! He falls in the opposite category when it comes to swings as he’s had a swing that often disappoints. But who cares, you can use Ivan Rodriguez at 2B.

I love the potential with these kinds of cards and would love to see more like this in the future. I don’t want to see Diamond Dynasty go the way of “Out of Position” cards where Max Scherzer can play catcher and be one of the best cards in the game. But utilizing actual careers as a baseline for unique cards is a ton of fun.

Best In The Show

Then of course we have one of the best cards ever released in Diamond Dynasty: Legends of the Franchise Hank Aaron.

This card is kind of an “all of the above” as Hank Aaron is a huge name, has the best attributes he’s ever received, and he gets insane positional versatility.

You can take a look at the attributes yourself so there’s no need for me to explain why this card is so good in that department. But The Hammer being able to play everywhere on the field sans SS and C is bonkers. If you get this card to Parallel 5, he’ll have diamond defense at every position with a crazy good arm and 85 speed. Suffice to say, you could find a way to use this card for the rest of the year and dare I say you should.

Two years in a row that we get a “free” Hank Aaron as a Boss card and this is one of the best we’ll probably ever see.

This postmortem feels a bit different. With the close of the regular season and the playoffs starting today, it’s settling in that even the Diamond Dynasty season is quickly drawing to a close. We already know about the next featured program and it’s safe to assume we’ll be getting extended Playoff Programs as well as Finest of the Franchise. After that, however, Diamond Dynasty content typically dries up.

In a year rife with gameplay concerns and legitimate questions that SDS has refused to answer, content remains king in Diamond Dynasty. The Legends of the Franchise Program is one of the best content drops in MLB The Show history and set the bar extremely high for the rest of the year. It already looks like SDS is following up with another killer program, so it’s a solid effort on their part to go out with a bang instead of the whimper The Show 22 seemed destined to depart on.