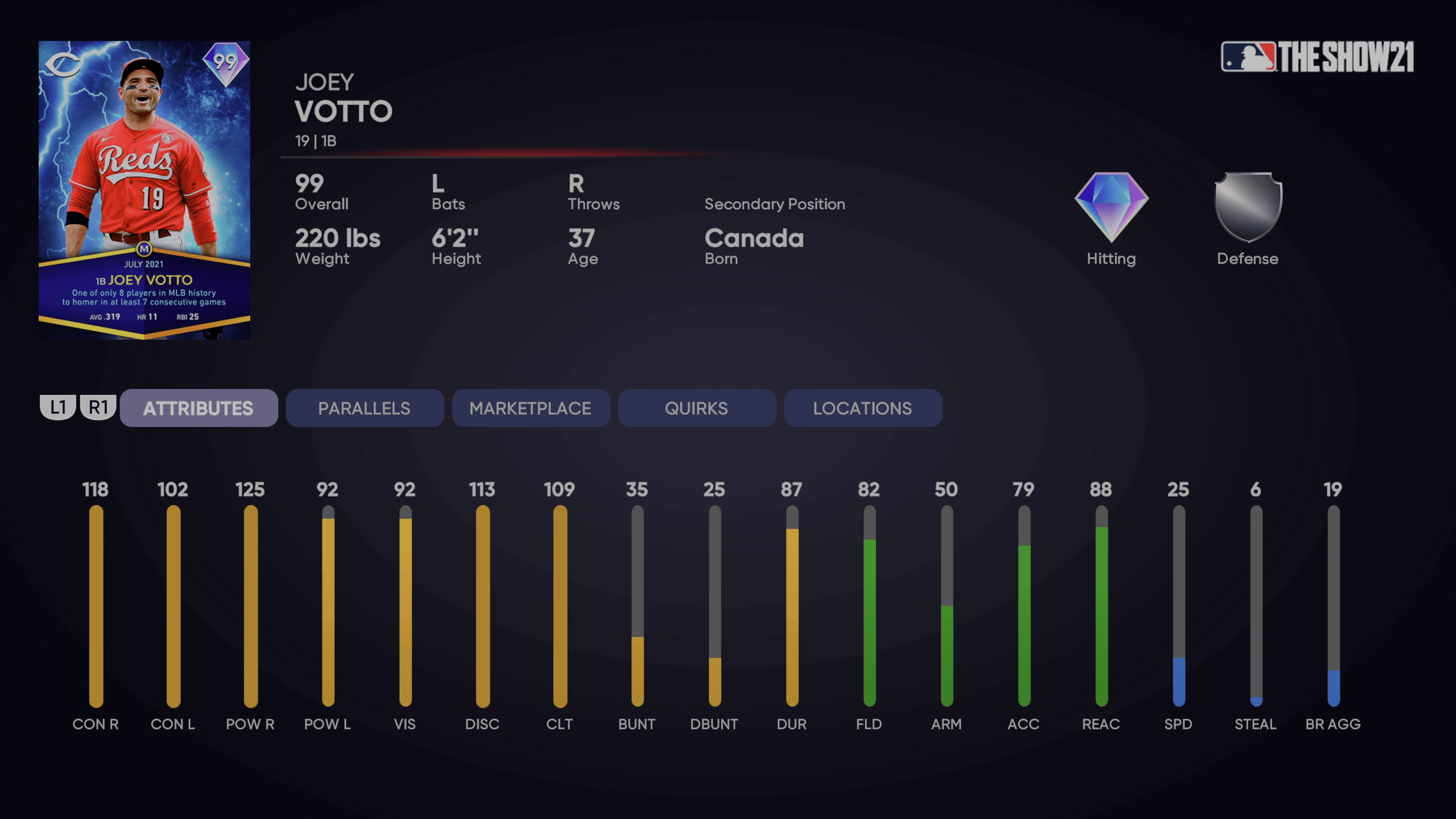 Well, Lightning Joey Votto probably does not quite creep into the top-top tier of 1B with his card here in the July Monthly Awards Program, but I don’t think that is any reason to fret. The secondary cards within this set do seem to stand out quite a bit and should help your squad around the edges. The cards this month are Lightning Joey Votto, Kendall Graveman, Austin Riley, Harrison Bader, Frankie Montas, Kyle Farmer, Brandon Lowe, Walker Buehler, and A.J. Pollock.

We’ll get into all the cards below, and also a reminder that the Awards Mookie Betts collection is now attainable as well. 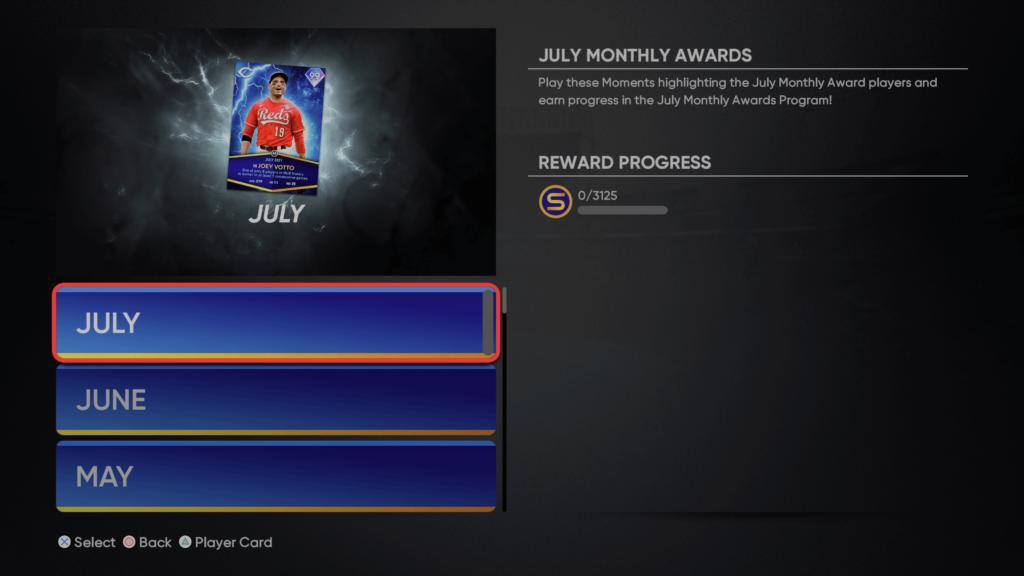 Each moment is worth 4 points. There is a total of 36 points to be had here. 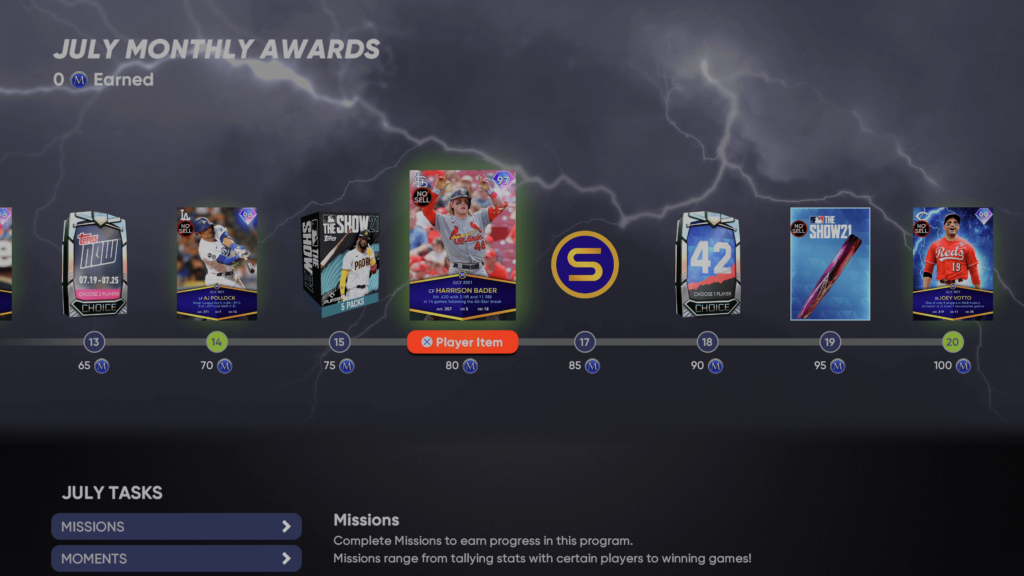 A really sick reliever right from jump. Graveman comes with a 95+ mph sinker with 90+ control and break, which is always a good starting point for a primary pitch in The Show. he mixes that with a cutter, changeup, slider, and 4-seam fastball. Basically, he has an ideal “meta” pitch mix and just a weird enough throwing motion to get you through an inning against top competition. With 125 H/9 to go along with everything else, this is a great starting card.

Frankie Montas is another player with a primary sinker that tops out in the mid-90s. His sinker does not have the elite break that Graveman’s does, but he can fall back on a little more velocity, and his splitter, 4-seam, and slider all have 90+ break as well. He only has 4 pitches, and the speed mixes might not work out at points, but he’s someone who can rack up strikeouts in the right matchup with overpowering speed and movement.

Austin Riley is a bit of a Battle Royale hero as a solid silver who can hit dingers against right-handed pitching. This version more or less doubles down on those traits with 104 contact vs. RHP and 120 power vs. RHP. He remains a reverse platoon player, and you’re really only looking to him for pinch hitting duties in Ranked Seasons play. That being said, since so many of the best pitchers are right handed, the card retains a little added value as a quirky player due to the reverse platoon splits.

All that being said, I would guess this is probably the least useful player in the set because he’s not quite going to find a home in BR as a diamond. Plus, his reverse platoon splits are maybe only useful against non-sinker throwing pitchers where you’re not worried about a ball coming back in on your wrists anymore.

Super utility Kyle Farmer plays the role of Lightning Kyle Schwarber this month as a player who can play catcher as a secondary position. What makes him even more unique is he plays any other infield position, plus LF. This is one of the first cards ever to be able to do that, and he’s a perfect utility player for that reason when you couple it together with his attributes. He has 111 contact vs. RHP and 125 contact vs. LHP, plus he has 105 power vs. LHP. With 88 fielding, 92 reaction, 80 arm, and 85 accuracy, you can also stomach moving him all over the place because he’ll retain his defensive value on the whole. A truly fun card to have on your squad.

In addition, this is the exact sort of player I like drafting in the first round in BR. I want to be able to still be flexible, and so having a guy you can just stick anywhere at the end of the draft gives him inherent value that you don’t get out of many cards during a draft. Now, like a lot of draft picks in real life, he immediately loses some value when the draft ends and you actually start playing games with what’s probably a slightly inferior player vs. who others picked with their top-round selections. Still, you hope that you were able to make some other picks during the draft you couldn’t otherwise make if you didn’t have someone like Kyle Farmer to jump around from spot to spot.

Brandon Lowe is another Battle Royale known quantity, and it’s related to his boom-bust power potential. With this card, those rough edges are smoothed out a bit as he now gets 79 contact vs. RHP and 108 contact vs. LHP to go with the same great power from a middle infield spot. He can rotate into the corner outfield spots if needed, but his value is either at 2B or as a pinch hitter. He has some great fielding stats so I would not sleep on this card at all as an all-around solid 2B.

I just genuinely enjoy pitching with Walker Buehler but the results can vary. You have to be able to hit your spots with him, but if you can, the stuff can be dominant. He’s going high 90s with his fastball(s), and his knuckle-curve and slider have just enough speed differential to be solid options. The true equalizer for him is of course his cutter. It has 99 break, and being able to spot that all over the strike zone will be the reason you either love him or move him out of your rotation.

Pollock is more of an all-bat option, and that’s what makes him a little tough to stand out. He has 122 contact vs. RHP and 112 contact vs. LHP, plus 115 power vs. LHP. Those are great stats, but he only has 78 vision and is not elite in the outfield. He has 75 speed, 80 fielding, 80 arm, and 85 reaction. Those are perfectly good stats, it’s just an issue of there being so many good options that finding time to try him out becomes tricky.

Getting a Bader card with even slightly better hitting stats makes me perk up a bit. He has 95 fielding, 96 reaction, and 95 speed. He’s a top-end CF on defense, and he has 125 contact vs. RHP and 91 power vs. LHP. He is 100 percent worth platooning if you want to try something out that’s a little different for Ranked Seasons, but you still need an option to go against tough left-handed pitching. Either way, I love getting this card.

And lastly we get to Joey Votto. Simply put, it’s not one of the very best options at 1B. The issue is more the defense and speed than anything to do with hitting, but the competition is fierce all over the diamond at this point within DD. He has 118 contact vs. RHP, 102 contact vs. LHP, 92 power vs. LHP, and 125 power vs. RHP. He has 113 discipline and 92 vision to tie that all together. His fielding is an 82 and reaction is 88, which is solid for 1B, but then only has 25 speed. It’s not like you need someone who is super fast and makes every play at 1B, but when we’re getting to discussing the most elite options, you have to be able to stand out in some way. Coupled together with some decent but not elite quirks, and he’s just outside the top tier right now.

Still, as always becomes the case when getting to the top end, the deciding factor is just how much you like his swing. So if he clicks for you, then he’s still going to be worth it to use him.

Comment on this article
Continue Reading
You may also like...
Related Topics:baseball, mlb, mlb the show 21, SDS, sony san diego