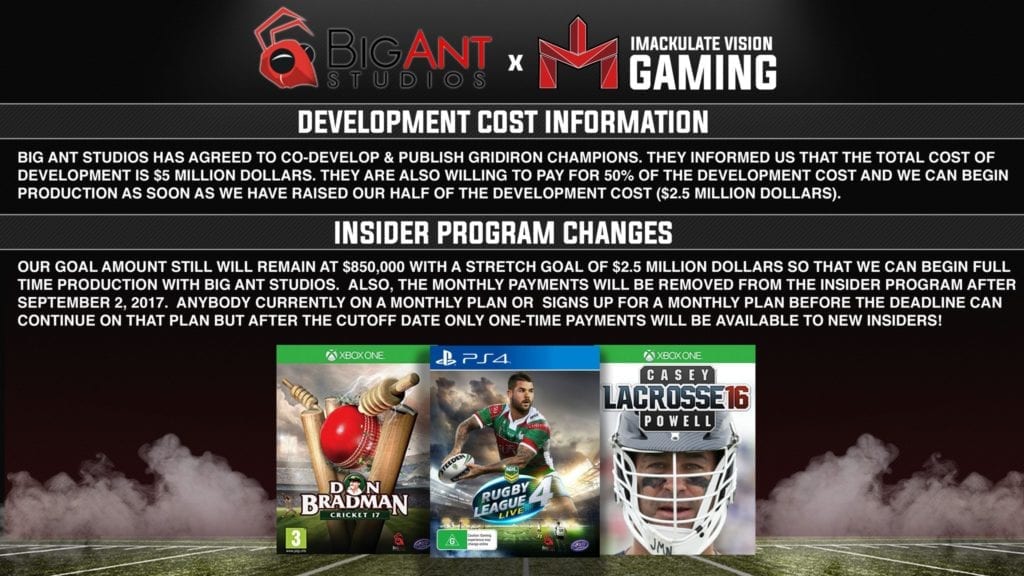 It seems the ambitious folks at IMV Gaming have found a publisher for their college football project, Gridiron Champions.

Big Ant Studios — the same company behind several other niche sport titles such as Don Bradman’s Cricket, Rugby League Live, and Casey Powell Lacrosse — has agreed to provide up to $2.5 million in funding and development help for the game.

We are proud to announce that @BigAntStudios has agreed to co-develop & publish Gridiron Champions™! #BringBackGreatness

We're excited to be on board! Now let's #BringBackGreatness https://t.co/Ln91JJ5B6o

Big Ant will provide funding so long as the folks at IMV are able to fundraise their half of development funds. Currently, IMV is trying to raise $850,000 with a stretch goal of $2.5 million themselves to get funding for the development of the game.

You can see their progress and join to help on the IMV Gaming Website. The vision for Gridiron Champions is to release the game on the PS4, Xbox One, and PC platforms.

The game will be a college football game, but one that’s completely generic but customizable. In short, its what many fans have asked for in the absence of NCAA Football.

There’s a lot of potential with this, and with Big Ant potentially on board — it means that the odds the project actually come to fruition are raised by quite a bit.

We’ll be keeping our eye on this one in the coming months!

Gridiron Champions Has a Release Date, College Football Returns in 2020