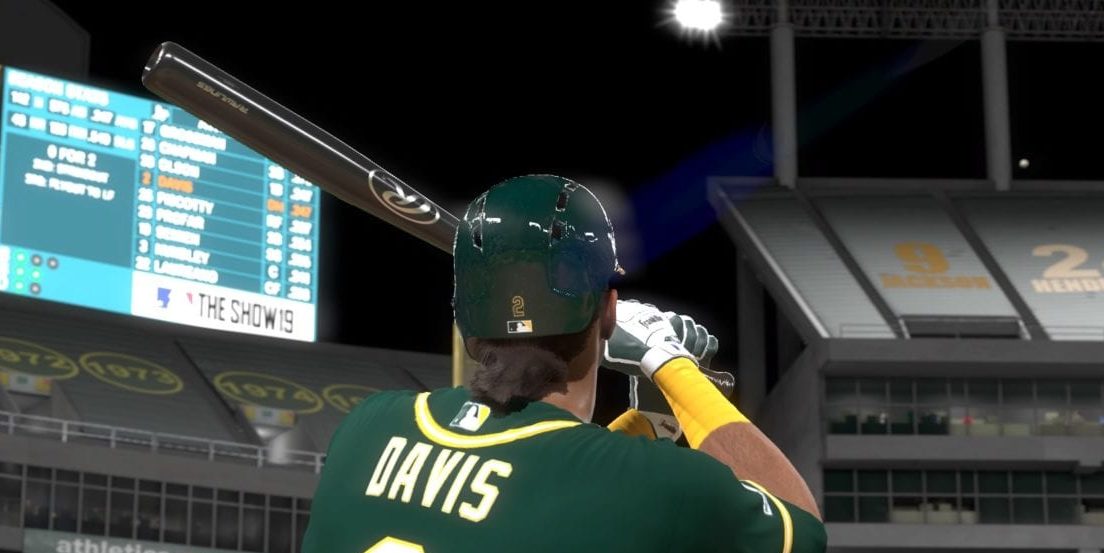 The basics of the card-collecting Diamond Dynasty mode in MLB The Show 19 may largely go unchanged year to year, but don’t let that make you think that nothing’s changed when it comes to building your squad. For one thing, thanks to an abundance of elite cards and the fact that gameplay is now a little more balanced than in previous years, there are plenty of viable players out there who can contribute to your team without costing you all that many Stubs. Whether you’re trying to round out your team with that one last missing piece of the puzzle or just starting out from scratch, here are some guys who can surely help you out, depending on your needs. 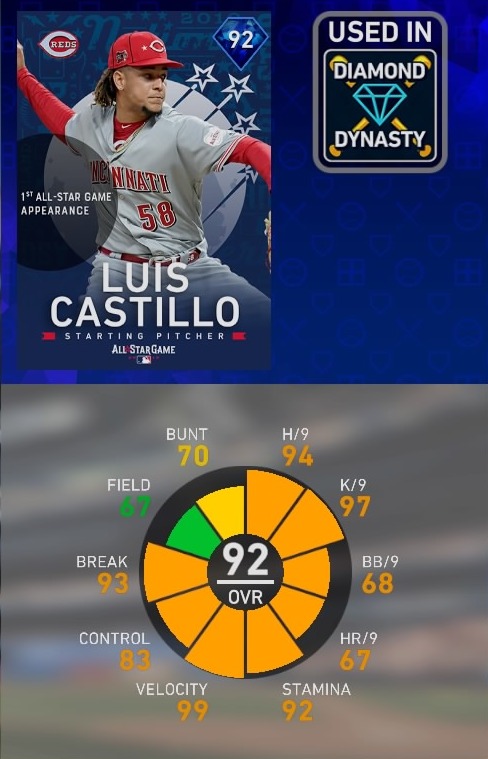 There are a lot of options on the market to fill out your starting rotation, but if you’re looking for a cheap but effective player with a great fastball, you could do a lot worse than this recently released Luis Castillo All-Star card. Compared to similarly priced options, Castillo has the leg up on Signature Series Legend Whitey Ford and All-Star Legend Mark Prior by virtue of his 99 velocity, which will make his fastball more effective at keeping players at higher levels a little more honest. His HR/9 rating of 67 may mean that he’ll give up a long ball a little more frequently than you’d probably like, and his BB/9 rating of 68 could see you struggling with control, but there has to be some reason a pitcher this good comes so cheap. But if you don’t quite have the necessary Stubs to afford Castillo, those Ford and Prior cards are a little cheaper than Castillo and still have comparable ratings in most attributes. 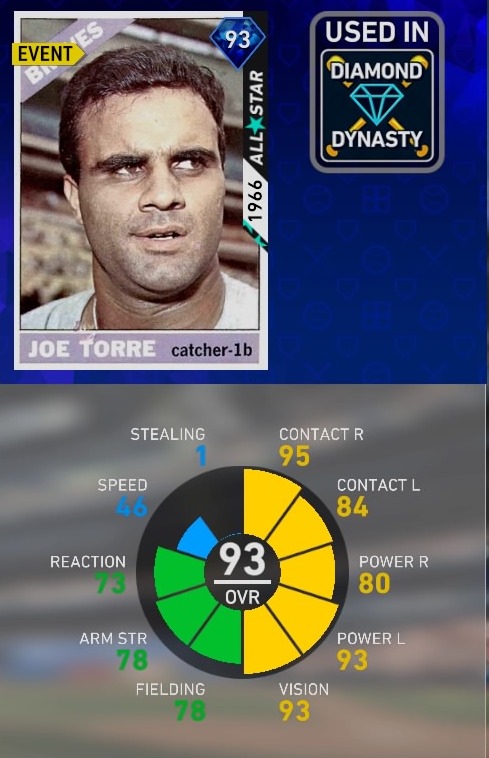 There are only two real choices if you’re looking for a budget catcher who can hold his own at the dish and behind the plate. While either will provide you with stellar production pretty much across the board, we’re going to go with Joe Torre as the slightly cheaper option compared to the 95 OVR Signature Series Russell Martin that will likely run you a couple thousand Stubs more. Though Torre’s bat does offer a little more pop than Martin’s, this will come at the expense of losing a little in defensive attributes, including arm strength and accuracy. All things considered, however, the offensive firepower should be enough to make up for what you’ll lose in the field. Still, consider this one almost a toss-up between these two elite catchers and more a matter of personal preference. 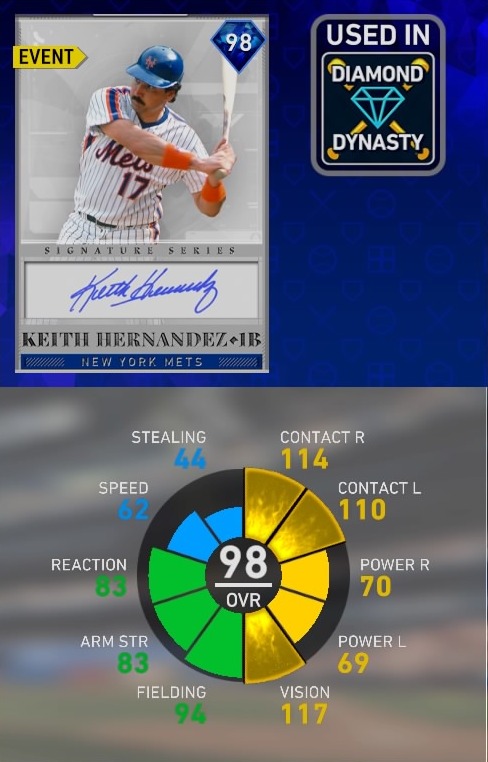 There are several intriguing possibilities at first base who won’t break the bank, but it’s hard to pass up the chance to slot a 98 OVR player — the highest-rated player on this list — like Keith Hernandez in at the position. Boasting both diamond fielding and hitting abilities, whatever Hernandez may lack in the power department he makes up for in his ability to hit for contact and get on base. If you need any more incentive to scoop up the guy who once briefly dated Elaine on Seinfeld, consider the fact that his rating is over 100 on such vital attributes as vision, discipline and clutch. Should you be looking for a little more power at the plate than Hernandez has to offer, however, you may want to go with the slightly cheaper Signature Series Travis Hafner, but just be prepared for more errors than you’d get with Hernandez at first base. 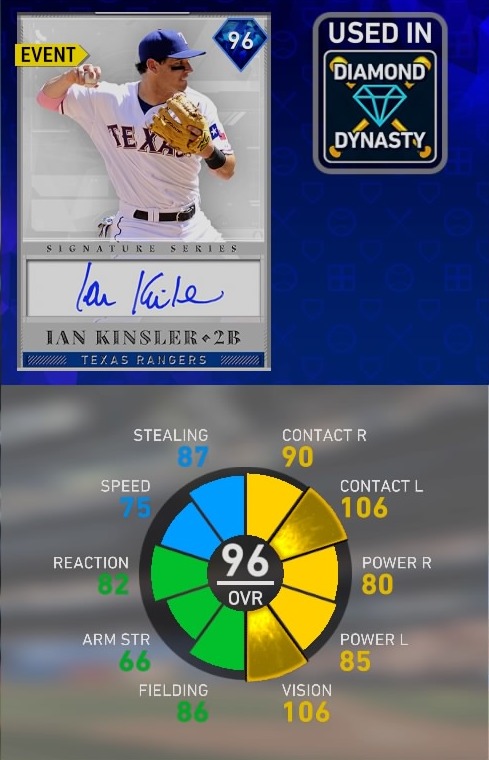 Second base is typically a difficult position to fill if you’re looking for a flexible set of skills, but Signature Series Flashback Ian Kinsler, from back in the days when he was playing with the Rangers, makes it difficult to find a weakness. Blessed with contact and power attributes that are pretty well balanced whether facing lefties or righties, he also possesses enough speed on the bases to steal a bag every now and then, and wouldn’t be all that out of place in the leadoff spot of a lineup. If you wanted to nitpick, you could maybe point to his gold-level fielding attributes as being slightly less than elite, but it will still be pretty rare when he commits an error, and his lesser arm strength isn’t as much of a problem at his position. There are some good cheaper cards available at the position, like Signature Series Legend Bill Mazeroski and 2019 All-Star Flashback Max Muncy, but none are quite as well rounded as Kinsler. 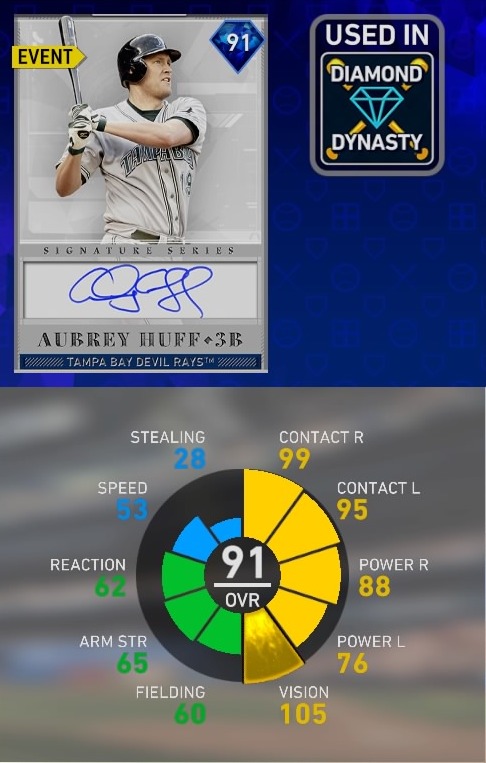 For as few Stubs as anyone else on this list, Aubrey Huff can provide the kind of offensive production that will rival any other hitter mentioned here. The rare left-handed batter who doesn’t lose much of his potency against southpaws, he should be able to get on base and launch dingers at an impressive clip no matter who’s on the mound. Granted, you’ll probably have to be able to accept a miscue at the hot corner every now and again thanks to his bronze-level fielding, but if that’s too much of a liability to bear, you’ll have to weigh whether it’s worth about 10,000 Stubs more to invest in someone like Hardware Flashback Miguel Cabrera, whose silver-level fielding might serve you better. 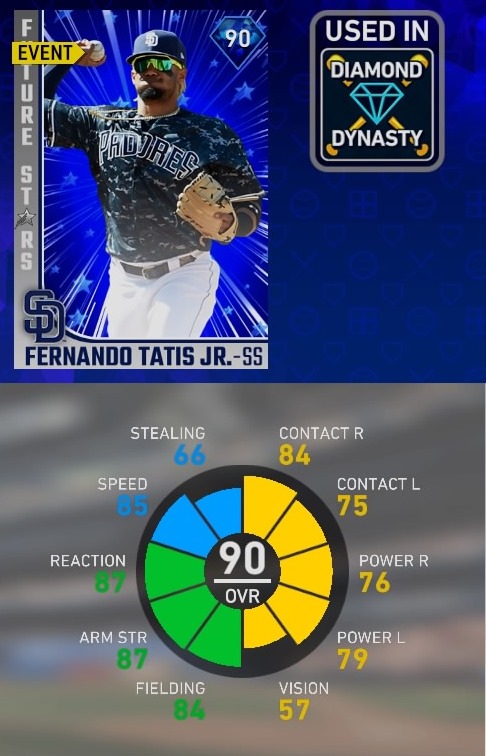 Easily the hardest position to find an elite budget option, Tatis Jr. is a solid choice at shortstop based on the balanced play he provides, with nearly all his key attributes hovering around 80. He might not be able to give you the kind of performance that the 99 OVR Cal Ripken can, but bear in mind that he also comes at half the cost. Otherwise, if you’re looking for more of a speed/contact/fielding guy that you can plug in at the top of your order, you may want to split the difference and consider Signature Series Omar Vizquel. 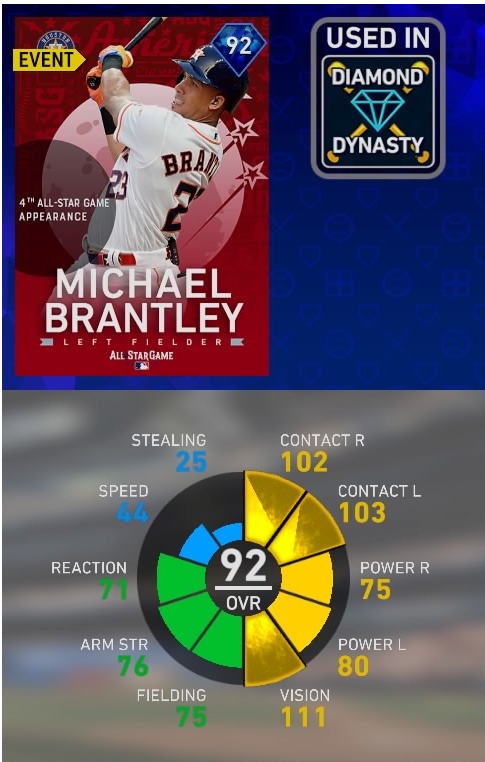 Oddly enough, there are actually a few different left fielders with recently released All-Star cards that are surprisingly affordable, but the best of the bunch is likely this Michael Brantley one whose only weakness is in the field — and it’s hardly bad enough to even be considered a weakness. Your other options here are Joc Pederson and Ronald Acuna Jr., who will both be able to give you more power but even worse fielding than Brantley. But Brantley has 100-plus contact stats from both sides of the plate and 75 and 80 power respectively versus righties and lefties, so it’s not as if he really lacks anything at the plate himself. 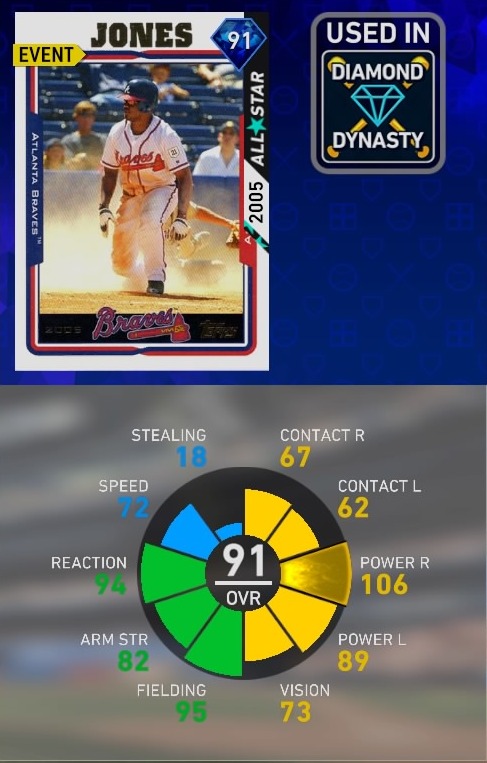 We would all love to have the inimitable Mike Trout manning center field, but unless you happen to have 135,000 Stubs or so lying around, you’ll have to settle for someone a little less expensive. Because so many people have All-Star Legend Andruw Jones at this point, he’s ultra affordable. While he may not perform quite like Trout, he also offers plenty of upside. Without question, his greatest attributes are his power (106 versus righties) and his fielding (95, plus 94 reaction) but you do have to be willing to sacrifice a little bit in the way of contact (67 versus righties and 62 versus lefties) if you want to plug him in at center field. Considering you’d have to spend another 25,000-30,000 Stubs or so to get someone better at the position (96 OVR Signature Series Curtis Granderson), Jones may be a good stopgap while you’re saving up your Stubs for an upgrade. 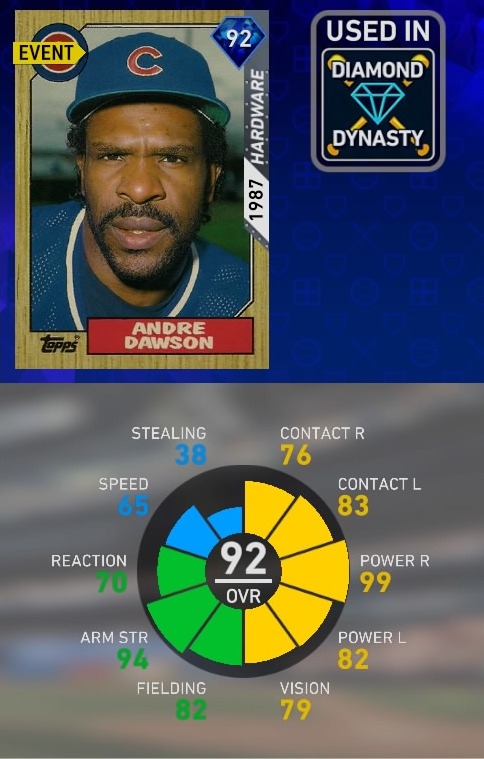 With three viable budget right fielders currently out there on the market, your own preference will likely depend on what your team is lacking elsewhere. The most versatile option also happens to be the cheapest, as Andre Dawson will be able to provide diamond abilities both at the plate and in the field. With above-average attributes nearly across the board (with his 40 discipline being the only real exception), he’s solid if not spectacular at everything you’d want him to be. If you’re more preoccupied with hitting and don’t mind a slight deficiencies in fielding, you could always kick in a few more Stubs for Hardware Legend Vladimir Guerrero (if you need more power) or Signature Series Legend Enos Slaughter (if you need more contact). 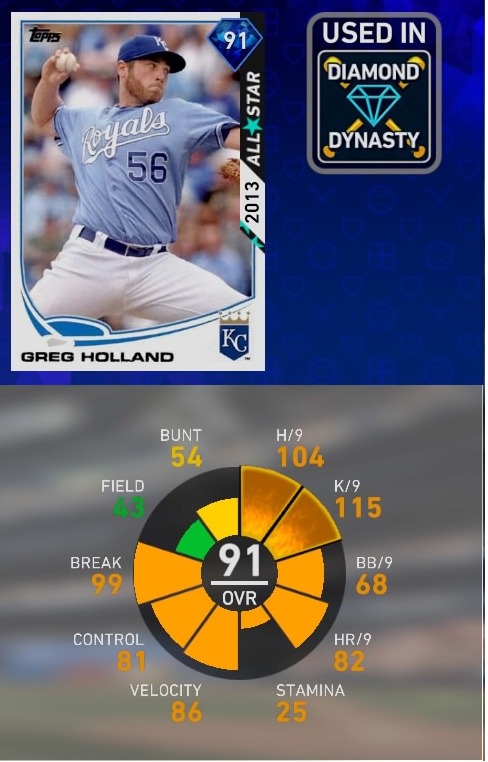 Many of the premium bullpen options are going to run you at least 50,000 Stubs, but it doesn’t need to cost you that much to get a reliever you’ll be able to use in high-leverage situations. All-Star Flashback Greg Holland can give you most, if not all, of what those expensive cards can deliver and at just a fraction of the cost. Holland has decent enough velocity with an 86 rating, his H/9 and K/9 are both 100-plus, and he’s been blessed with a pretty nasty slider-splitter combo that should be able to keep plenty of hitters guessing. Of course, he’s not quite as effective as the relatively common All-Star Legend Goose Gossage card, but that one will run you almost 30,000 Stubs more for just a slight upgrade in velocity and several other attributes.