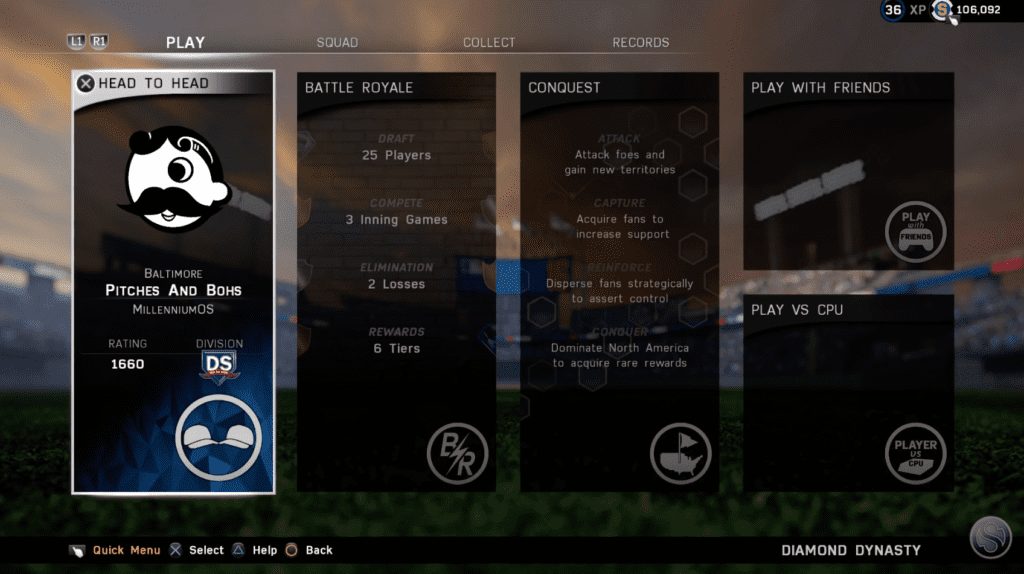 For those unfamiliar with it, Diamond Dynasty is MLB The Show 16‘s card-collecting mode and is inherently worth a try. The beauty of Diamond Dynasty is that cards are collected no matter what mode you play in. So, if you’ve played every last game of the last three seasons in franchise mode or exclusively play in Road to the Show, you still have a treasure trove of cards to utilize. Diamond Dynasty has significantly diversified available in-game missions and, as a result, has immensely prolonged MLB The Show 16‘s shelf life.

The real treat comes after the completion of the David Ortiz Career Salute, as a number of live cards can be unlocked in sequential fashion. Live Prince Fielder’s missions are different from Live Ichiro’s missions. Additionally, while you pursue the Career Salute missions, you can simultaneously chip away at the World Series Rookie missions, log hits and innings towards unlocking legends, and pursue your overall statistics missions. Each collection of missions gives you a new tantalizing reason to completely change up your lineup. It also provides owners of, say, seven Live Michael Bourn cards with a sizable return in the Community Market, which could kickstart an entire swarm of roster-building Stubs.

Captain’s stores have expanded to levels 40 and 50, which consistently offer Diamond and Legend cards respectively. This expansion gives players close to or past level 30 a chance to continue building experience. Furthermore, offering otherwise rare and expensive cards via Tickets as opposed to Stubs gives players more opportunities to get re-engaged with DD.

A Prolonged Shelf Life for The Show

In the perennial sports world, retaining players past the season’s real-life end always proves to be a challenge. The tantalizing glow of a new season in another sport seems to perpetually pull us in. Outside of the die-hard baseball fans gunning through season after season in franchise mode or Road to the Show, many players will move on to other titles. After all, annual sports titles have recently provided players with little incentive to stick around past the game’s traditional shelf life.

Sony San Diego have gone out of their way to provide fans with plenty of reasons to come back to Diamond Dynasty as they anxiously await the release of MLB The Show 17. If you have yet to give it a try, use all of those saved up cards and Stubs to build a team around your free Rookie David Ortiz. If MLB The Show 16 has not been in your rotation lately, comb through Diamond Dynasty’s new missions and hop back on the proverbial horse.