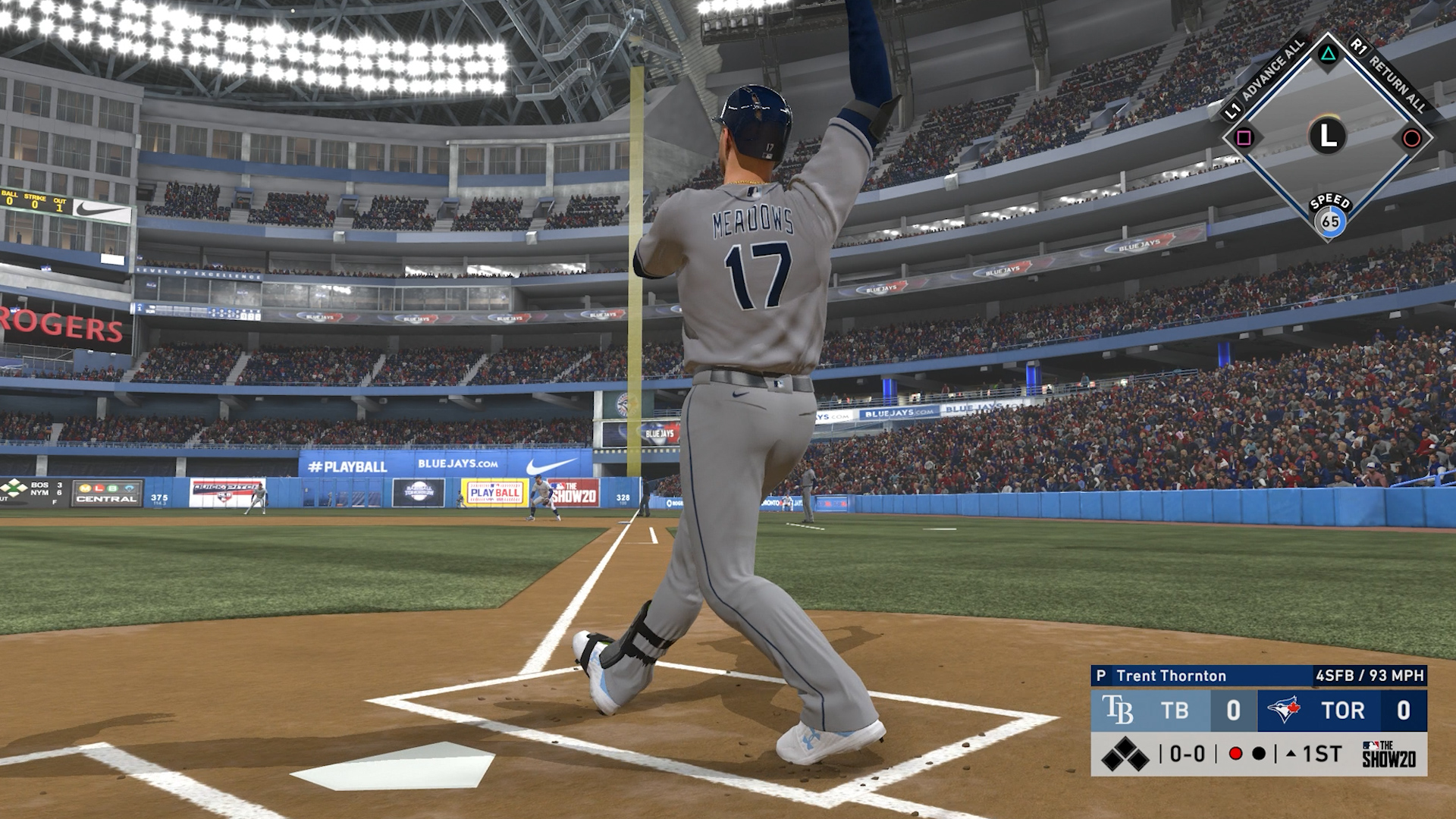 I wrapped up the National League with the San Francisco Giants and now open the AL with the Tampa Bay Rays home run swings and celebrations. The Rays are in a little bit of a transition phase where they have some solid home run hitters, but they’re also waiting for the next wave of prospects. With that in mind, we have four players to cover today.

Analysis: Meadows burst onto the scene last year, and it’s good to see him get such a good re-creation. The big thing with Meadows is the follow through and that’s spot on here. He wraps the bat up and over his head as he pulls in the left arm towards his body. The stance is straight forward being slightly open and with a slight leg kick, and it’s all working here to make this a great swing to show off to start the American League.

Analysis: Renfroe has good and bad to his swing and celebration. The good is that the celebration is spot on as he taps his chest before pointing to the sky as he crosses home plate. The issue is with the swing where he needs to keep his hands more out in front of him, and he needs a little more lean forward to his stance before he activates his hands and takes a rip. The back leg is mostly accurate in the setup in The Show since he is up on his toe, but the left leg could just be moved slightly further back to make it even better. Lastly, the follow through is two handed in The Show, but it should be one handed.

Analysis: I’m not surprised Adames has some flaws since he’s a young player who just hit 20 home runs for the last time last year. That being said, he certainly has a generic swing here so there’s not a ton to analyze. He needs a much bigger leg kick, he needs to be hunched over more in the setup, and he needs to keep the front foot more flush to the ground even on the follow through. That being said, a two-handed follow through is correct here.

Analysis: Pretty sure Brandon Lowe also has a generic swing, but again, that’s somewhat expected. Here there is not as much to change as with Adames either way. His hand positioning could be moved out away from his body a little more, but it’s accurate to have them at chest level. Lowe needs a slightly bigger leg kick, but after that the follow through looks solid even if it’s not specific to Lowe. All in all, since Lowe has a rather generic left-handed swing, not much would need to be altered to get him looking just right in the box.

I love Yandy Diaz and Ji-Man Choi, but it didn’t seem right to showcase them as they didn’t look super unique. Zunino and Kiermaier are vets, but again, it didn’t seem to make sense to focus on them either. Of course, there’s some prospects eventually coming to Tampa Bay who will hopefully make this list in the future, but that will have to wait as well. Tomorrow I’ll continue the look at the AL East with the Baltimore Orioles.