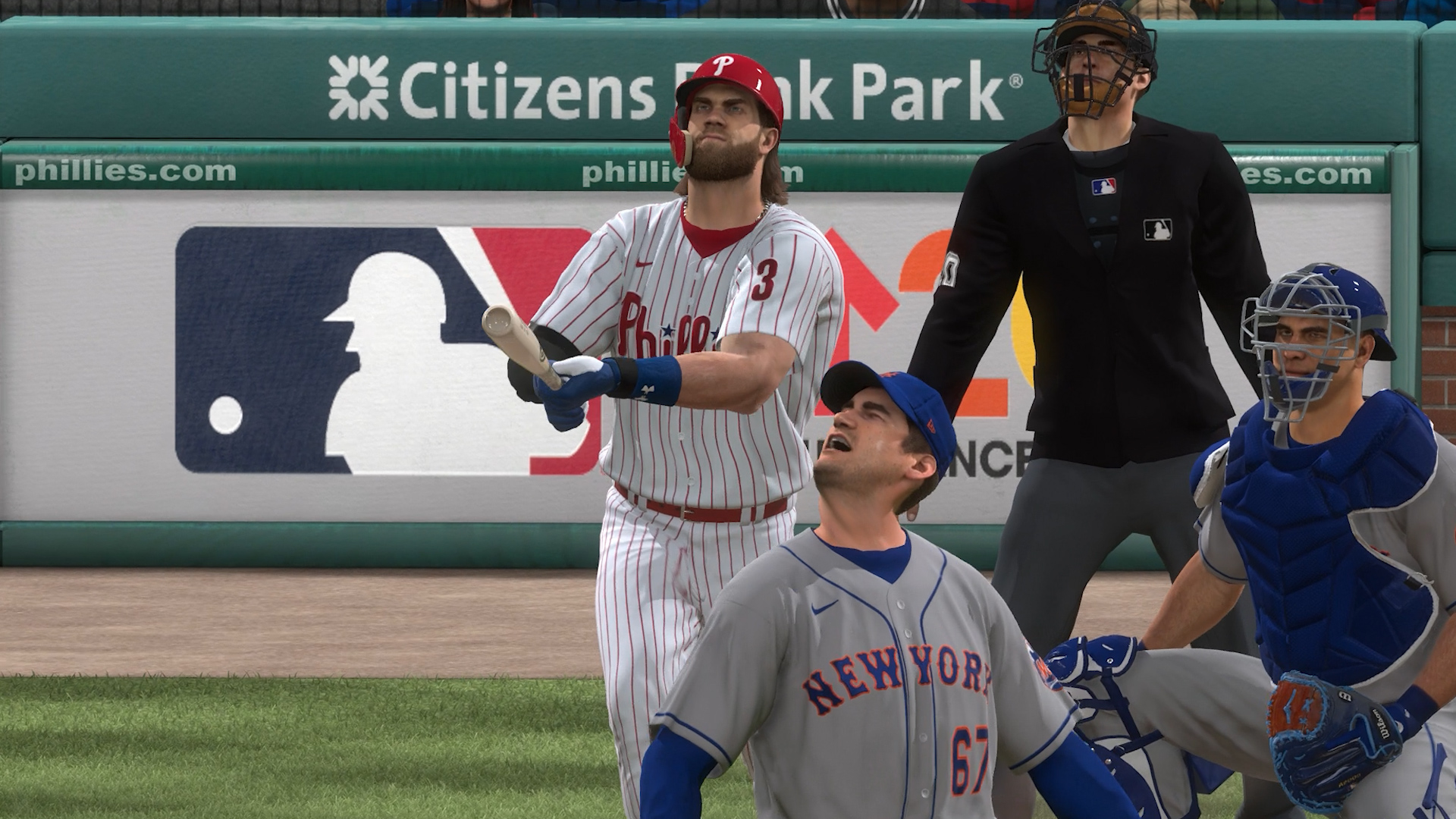 On the heels of the rather fascinating Atlanta Braves, we have the Philadelphia Phillies home run swings. The Phillies have a large quantity of players to cover, but they’re not as complex to go through as the Braves.

Analysis: Bryce is nice in that he has a powerful swing, but it’s not too complex. His stance is a little bit open, and then he has a relatively small leg kick before squaring to take a rip. This is a rare time where The Show maybe goes a little overboard with the height of the leg kick, but otherwise everything works here. The force of his swing can be felt, and the way Bryce will stare a bit before sprinting around the bases at times works as well.

The celebration is also accurate. Harper gives the “horns” sign and then points into the crowd, and that comes across in both the video game and real life.

Analysis: The Show nails Rhys Hoskins. The leg kick here syncs up with the swing, and the two-handed follow through is there for Hoskins. Perhaps the only alteration is Hoskins leans back a bit more on truly deep shots in real life, but that’s not really worth penalizing for since the point of nailing Hoskins is just making him feel like a big, strong dude.

As for the celebration, while what I captured in The Show doesn’t correlate, Hoskins’ accurate celebration is in the game, it just doesn’t always play (I think it has something to do with men being on base or not when a HR is hit — and it applies to everyone). So while the video evidence doesn’t back it up here, if you go and look in the game, you will find Hoskins does have the side step across home plate as he taps his helmet.

Analysis: The issues with Didi’s accuracy is all before the swing occurs. His leg kick is far too pronounced here, and he doesn’t really raise the bat as high off his shoulders when swinging as he does in real life either. On top of that, Didi’s stance stays more open even on the swing than it does in The Show version. Once the swing itself occurs, everything looks much better, and that’s played up nicely by the bat flip.

This is also another example somewhat like Hoskins where the video game is more accurate than it maybe shows in the comparison. A lot of Didi’s most memorable home runs do involve a more exuberant bat flip like the one shown in The Show. In the example I pulled, his bat flip is a little more muted, but I assure you what The Show has here is fair and accurate. In terms of the celebration when crossing home plate, Didi does not do the “horns” in The Show, but he does do the pounding of his fists together, so it’s relatively accurate here as well.

Analysis: The McCutchen one-to-one here is basically 100 percent nailed from start to finish. The smallest quibble would be that it’s hard to mimic the speed with which Cutch brings the bat through the zone when swinging. Regardless, the setup is perfect, his leg kick is where it should be, and he closes his stance on the swing just as he should.

When it comes to post-swing, Cutch pulls that right arm in across his chest the same way in both examples, and when he comes across home plate he tips the cap when touching the base. Perfection.

Analysis: Overall, the Phillies rate out the best so far within the NL East in terms of accuracy. Realmuto is another one where it’s hard to find fault with anything. The leg kick is very pronounced in both examples, and even the way Realmuto sort of torques up onto his left foot after the swing is shown in both examples. From there, he quickly brings the bat back to neutral with two hands after unloading on the baseball, and he takes off from there to jog the bases.

So while on some level it’s sort of unfair to ding The Show for Bruce having multiple variations of his follow through, since these home run swings are based on “no doubt” home runs, SDS should go with the version with the two-handed follow through because that’s how he looks when he really drills a ball.