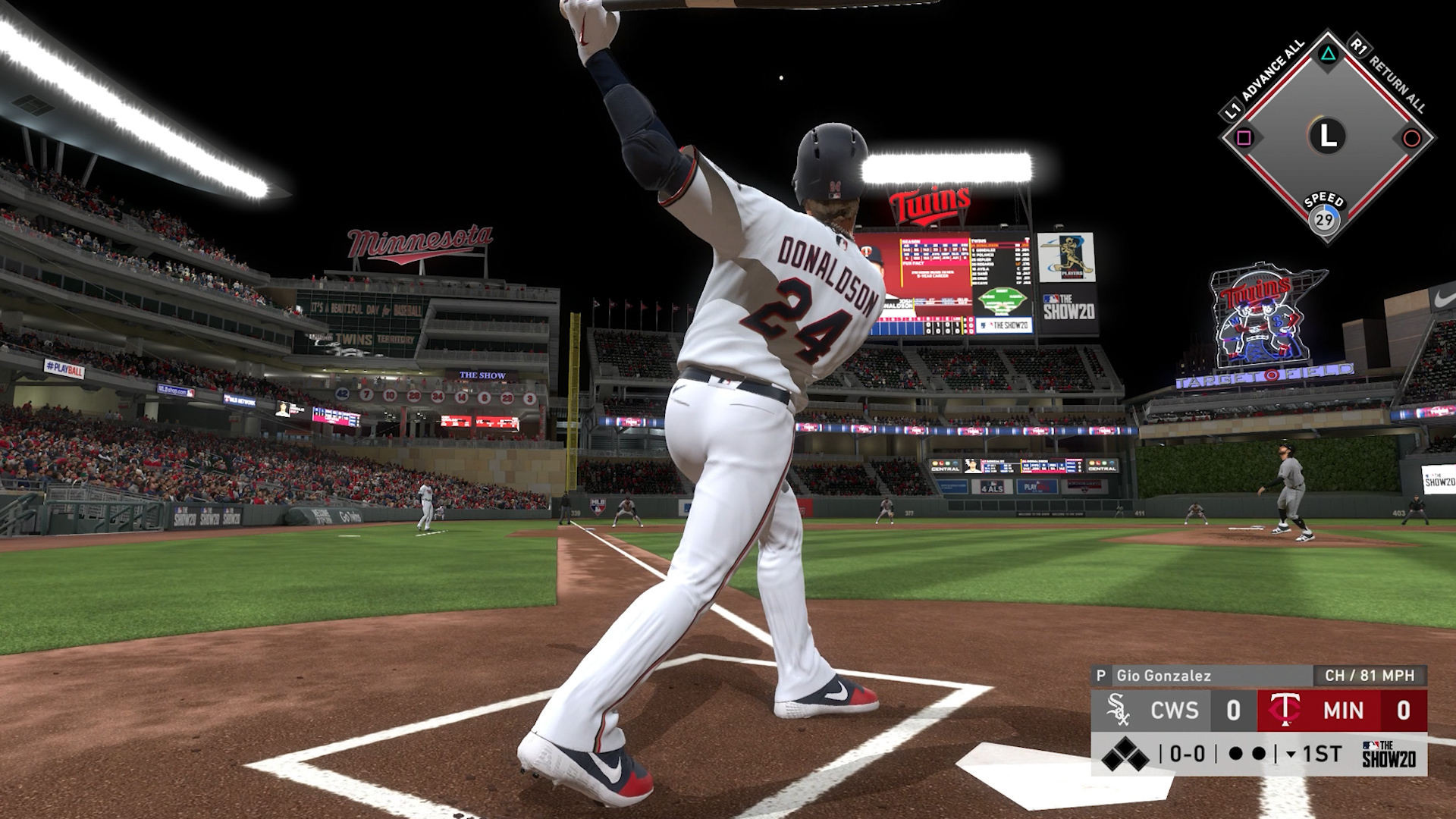 The review of the Detroit Tigers was simple enough because there was only three players to review, but the Minnesota Twins are a much bigger endeavor. There are a lot of Twins home run swings to analyze. In fact, this is the most players I’ll review in one article as there are nine players to analyze. But it does make sense that there are a lot of swings to review because the Twins hit a record-breaking 307 home runs last season.

Analysis: Hard to find any faults here with Donaldson. The elbow sticks out before the swing begins, the leg kick is high enough, he pulls his arm in to his body on the one-handed follow through, and the bat follows through straight behind his back. It’s more or less frame perfect. On top of that, the umbrella is out in full force before he puts it away as he comes around third base. A perfect re-creation for Josh Donaldson.

Analysis: Nelson Cruz is just about perfect as well with the one issue being a slight alteration of his toe tap when he loads to swing. In The Show, he closes down the stance a little too much with the toe tap, while he actually stays a little bit open in real life when he brings the toe up to time his swing. That being said, his toe tap is unique so The Show got the hard part right with it, which is why I barely take any credit off for the minor mistake. Otherwise, it’s another great swing that wraps up with a powerful two-handed follow through.

The celebration is also spot on as Nellie puts the two fists to his mouth and then points to the sky.

Analysis: Kepler’s base stance is mostly spot on, so the issues don’t arise until he sets himself in motion. Kepler has a relatively unique leg kick since he toe taps and then does a small leg kick. The Show just has him with the single overly large leg kick. The other issue is the follow through should come more around his back rather than his neck. His legs also tend to slide out from under him a little more, but that’s hard to replicate.

Kepler technically has a signature celebration in The Show, but I could not get it to trigger in-game, and I could not even really see it in the edit menu, so I think it’s a bug and thus this portion of the grade is incomplete.

Analysis: Garver’s issues are almost word for word the same as Kepler’s. The stance itself is almost perfect, except Garver needs to have his front foot flat rather than be up on his toe. The leg kick is too large in The Show, and then the follow through comes up around the neck rather than around the back.

Analysis: As is usually the case with switch hitters, The Show just mirrored his left-handed stance, but it doesn’t really work here for Marwin Gonzalez. Instead, he should be much more hunched over, with bent knees and a two-handed follow through. There’s not much to call out as correct here. I don’t review both sides of the plate for every switch hitter, but Gonzalez’s power is balanced out enough from both sides of the plate that I thought it was worth a look here.

Analysis: This is much better with the main issue now just being the follow through. Here, Gonzalez is more straight up as he should be, then he has the extended leg kick and mostly still keeps the hands down near the stomach even during the load. The follow through should be two handed, but in The Show it is one handed.

Analysis: Polanco’s another switch hitter, but his power is more tilted to just his right-handed swing so I just looked at that here. His basic setup is easy enough to replicate and there’s not many issues with it in The Show minus him having his hands too high. Beyond that, his leg kick is much too large, and then he has a one-handed follow through rather than a two-handed one. In addition, he should come up on his front heel with the follow through, but he does not do that either in The Show.

Analysis: So it’s actually a little hard to properly grade Rosario’s swing because TV cuts away from the hitter so quickly after a swing you don’t get to see him sort of hop step out of the box and really fall back towards the dugout as he does so. However, what’s in The Show is accurate to how Rosario tends to come out of the box. He stares a little longer, and doesn’t always do a big hop step out of the box, but he’ll generally always come out of the box and drop back towards the dugout a bit before running the bases. Beyond how he gets out of the box, Rosario could have his front foot be bouncing a little more before the pitch, and he needs more of a toe tap than a leg kick when loading.

Analysis: Sano has another straightforward swing, so The Show does a good job keeping it simple here and not messing up the basic stuff. On the swing itself, the big leg kick is accurate, but Sano does load his hands a little too much in The Show. On the follow through, Sano could stand to extend his two-handed follow through just a bit more before dropping the bat, but I’m fine with The Show giving Sano a little swagger on the bat flip even if it costs a bit in the accuracy department.

Analysis: The high hand positioning and the very small leg kick are the big things here with Buxton and The Show gets them both right. The problem is with the follow through as The Show gives Buxton a one-handed follow through, but instead it should be two handed.

Phew, quite a list to go through, and the rest of the AL Central is rather review-heavy as well. I’ll be back on Monday with the White Sox. We also have just two AL Central teams left and the entirety of the AL West before reaching the end of this MLB home run swings review series.